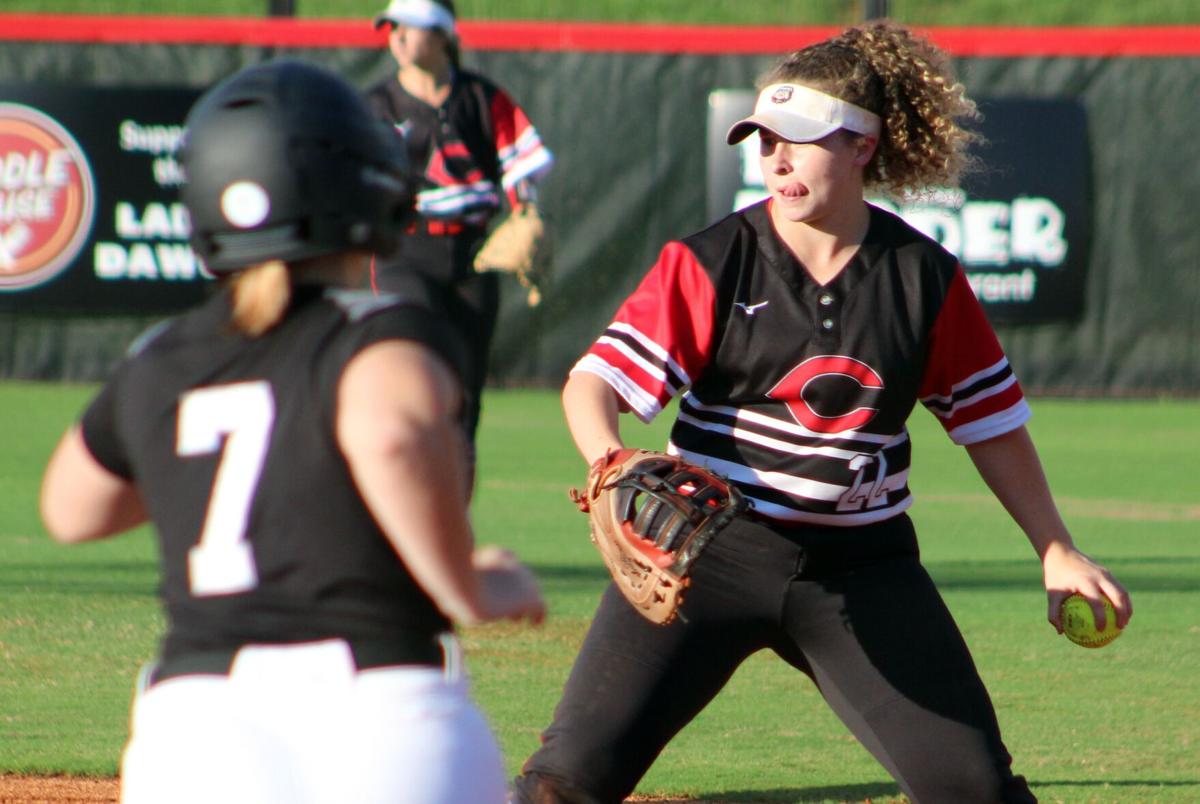 Cedartown’s Marycille Brumby checks the other bases for a play after making a catch for the out at first during a game against Ridgeland at Cedartown High School on Wednesday, Sept. 22, 2021. 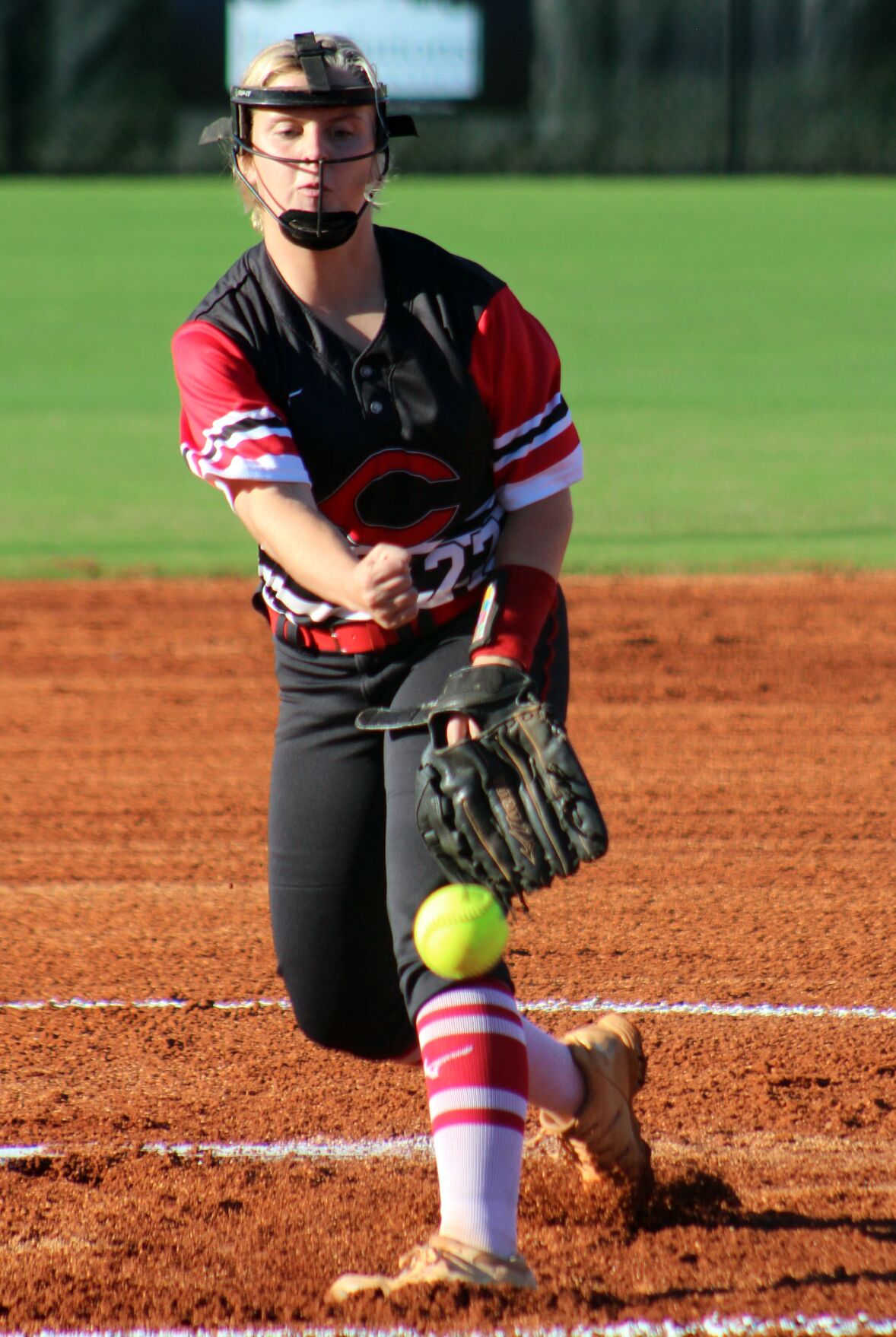 Cedartown pitcher Reagan Clarke delivers to the plate during the first inning of a game against Ridgeland at Cedartown High School on Wednesday, Sept. 22, 2021. 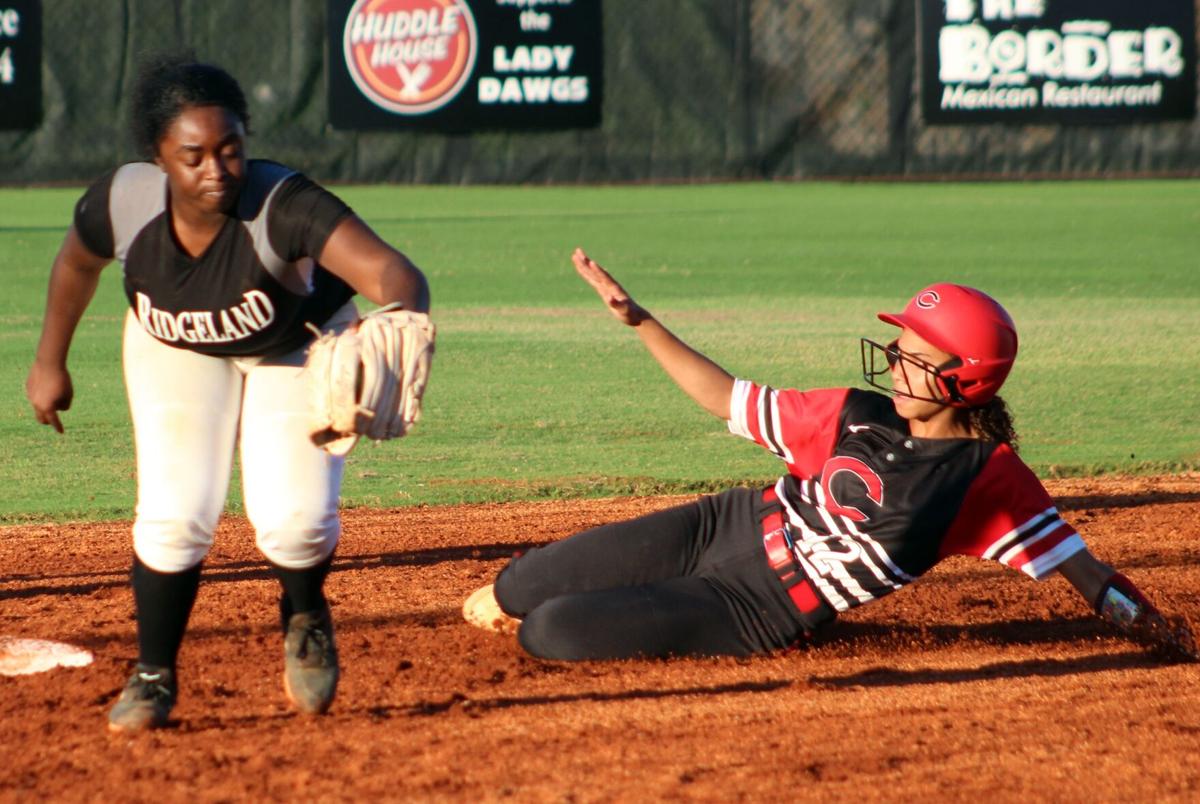 Cedartown's Makayla Jordan (12) slides into second base as a Ridgeland player moves up to catch a throw during a Region 7-4A contest at Cedartown High School on Wednesday, Sept. 22.

Cedartown’s Marycille Brumby checks the other bases for a play after making a catch for the out at first during a game against Ridgeland at Cedartown High School on Wednesday, Sept. 22, 2021.

Cedartown pitcher Reagan Clarke delivers to the plate during the first inning of a game against Ridgeland at Cedartown High School on Wednesday, Sept. 22, 2021.

Cedartown's Makayla Jordan (12) slides into second base as a Ridgeland player moves up to catch a throw during a Region 7-4A contest at Cedartown High School on Wednesday, Sept. 22.

There was good and bad on the softball field for the Lady Bulldogs last week.

Cedartown softball split its two Region 7-4A contests last week. The Lady Bulldogs fell to Ridgeland 12-7 on Wednesday before bouncing back with a 22-0 shutout win over Southeast Whitfield the following afternoon.

The series was set to finish with one game at Cedartown High School on Sept. 16, but inclement weather forced that game to be postponed until Sept. 22.

Ridgeland raced out to a 4-1 lead in the matchup, but a five-run third inning that included RBI hits from senior Kaylee Nikolopoulus, junior Ivari Boozer, and freshman Kendall Howard gave Cedartown a two-run advantage. The Lady Panthers would not go down without a fight, though, outscoring the Lady Bulldogs 8-1 over the final four innings to secure a 12-7 win.

“I felt that our effort was just not very good tonight, and they know that,” first-year head coach Jaime Monroe said after the loss. “We have to show up to play every single pitch and we didn’t do that. We talked about that after the game, and we know that most of our mistakes happened in that game due to our effort.”

Senior first baseman Marycille Brumby turned in a 4-for-4 performance in Dalton.

She finished with one double, one triple, four RBI, and four runs. Clarke (3-4, 2B, 5 RBI, 3 R) and Arp (2-4, 2 RBI, R) dominated at the plate as well. Arp, the starting pitcher on Thursday night, surrendered just one hit in three innings pitched.

“We bounced back and swung the bat very well on Thursday night,” Monroe said. “It’s huge to start these series off with wins. It just kind of sets the tone for the whole series, in my opinion.”

Her squad completed the back-half of a home-and-home with Oconee County (8-11) on Saturday morning. The Lady Bulldogs, who defeated the Lady Warriors 8-0 at home on Aug. 7, held on late to win 10-9 over the weekend in Oconee County’s Senior Day game.

Although Cedartown was able to close out the week with a win against a solid 3A team, Monroe stated that there is still plenty of room for improvement.

“We are going to have to get back to playing fundamental softball. We did very well in the field to start the season but have slid a little bit,” Monroe said. “We have not had a lot of opportunities to get outside due to the rain. We are lucky to have some good weather coming up so we can get outside and get better.”

Monroe, who joined Cedartown’s softball program after spending several years as an assistant coach with Class 6A power Alexander, said that she is still working with the girls to understand teamwork and the mental aspects of the game.

“Everyone on the team has a role,” Monroe said. “It doesn’t matter if you’re in the lineup that night or not.”

Looking at the squad this season, the new coach shouted out several players who have gone above and beyond day-in and day-out.

“We have some really big leaders for us this year,” Monroe said. “All of our seniors (Emma Tuck, Morgan Isabell, Arp, Brumby and Nikolopoulus) have stepped up in different ways but we’ve also had a couple juniors that have been big leaders for us as well. Makayla Jordan and Taylor Westmoreland have been great vocal and physical leaders this year. When I ask the team to do something, they are usually the first ones to do it.”

Monroe, a Douglasville native who played collegiately at UNC-Charlotte, stated that she is enjoying her first year as a head softball coach.

“I’m just really excited to be here in Cedartown. Coaching, to me, is all about the relationships created with these kids and I absolutely love the relationships we have created so far,” Monroe said. “Our Senior Night

games are this Wednesday, and we would love to see everyone come out and support these awesome seniors!”

The Lady Bulldogs will finish the series against Southeast Whitfield with a doubleheader at home on Wednesday. It is an important series for CHS, who is still jockeying for position in the region standings. Cedartown is currently fifth in Region 7-4A with a 5-8 record, just behind third-place Pickens (7-5) and fourth-place Northwest Whitfield (6-6).

Wednesday’s region doubleheader will mark the Senior Night matchups for