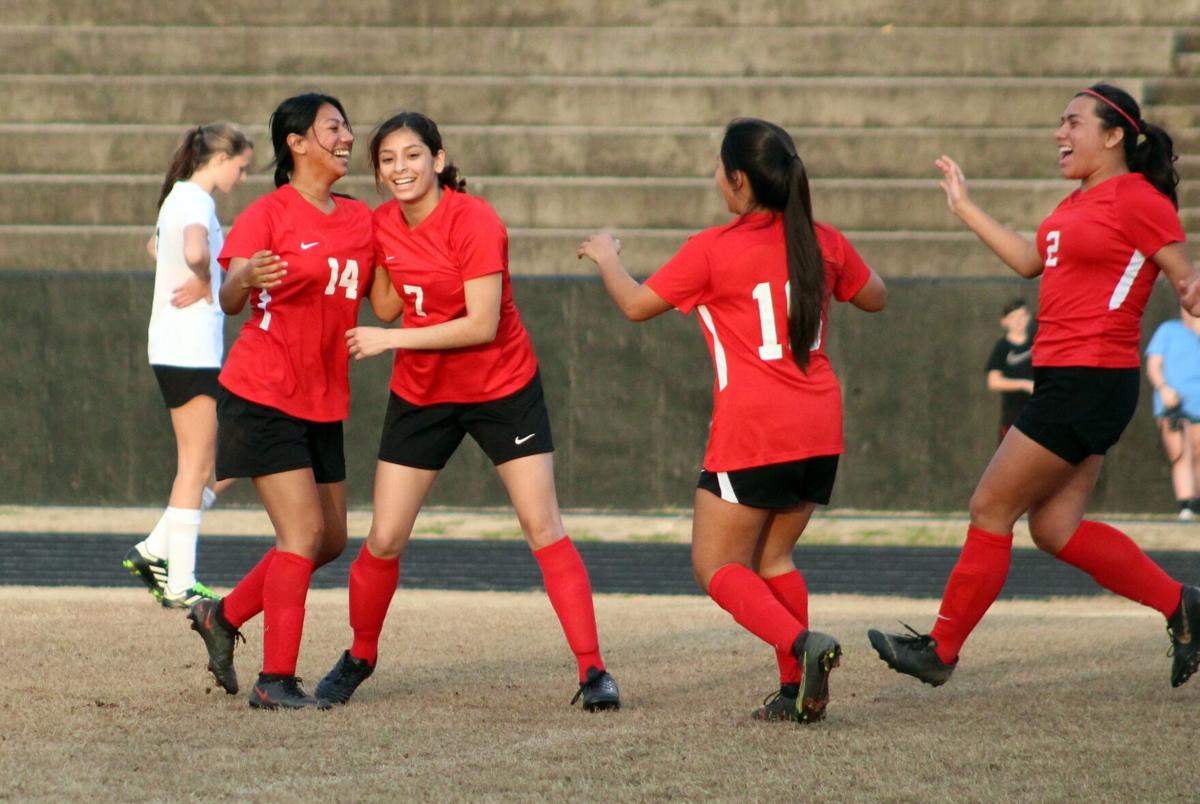 Cedartown’s Nancy Barrientos (14) celebrates with her teammates after scoring a goal against Pickens during last Friday’s Region 7-4A match at Cedartown Memorial Stadium. The Lady Bulldogs blanked the visiting Lady Dragons to get their first region win. 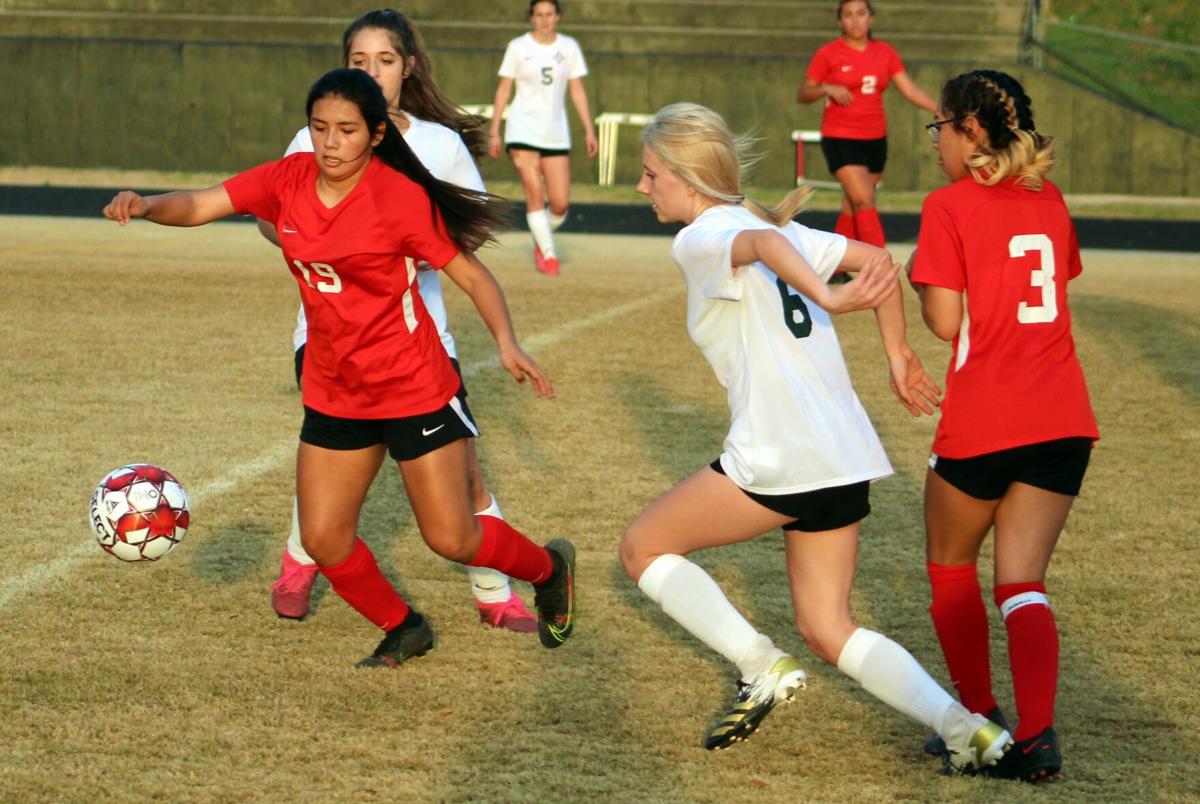 Cedartown’s Maritza Segura (19) moves in to control the ball against Pickens during last Friday’s match at Cedartown High School. 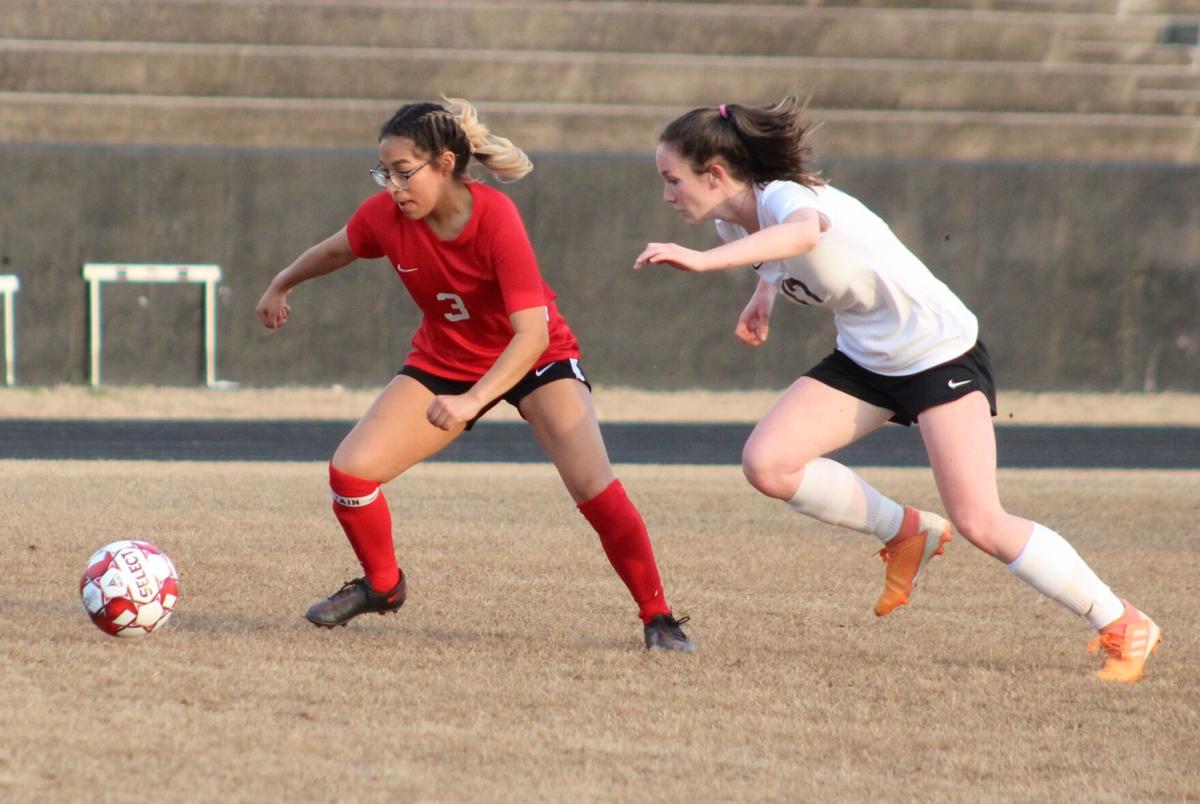 Cedartown’s Emily Segura (left) competes for the ball against a Pickens player during last Friday’s match at Cedartown High School.

Cedartown’s Nancy Barrientos (14) celebrates with her teammates after scoring a goal against Pickens during last Friday’s Region 7-4A match at Cedartown Memorial Stadium. The Lady Bulldogs blanked the visiting Lady Dragons to get their first region win.

Cedartown’s Maritza Segura (19) moves in to control the ball against Pickens during last Friday’s match at Cedartown High School.

Cedartown’s Emily Segura (left) competes for the ball against a Pickens player during last Friday’s match at Cedartown High School.

Despite being placed in one of the toughest regions in Class 4A, Cedartown’s boys and girls soccer programs have found success in 2021. Both teams picked up key non-region victories last week and are hoping that momentum will carry over into the remaining Region 7-4A schedule.

Following last week’s matches, the Bulldogs are now 5-6 on the year. Cedartown started out 3-2 with wins over Woodland (Cartersville), Darlington, and North Murray, but then lost their first three region contests against Northwest Whitfield (10-0), Central-Carroll (2-1), and Southeast Whitfield (5-1).

Cedartown’s boys were able to crush Donoho, a Single A Private school out of Anniston, Ala., 7-1 last Monday. They followed it up with a 5-2 road victory at Hiram the following day. Unfortunately, the Bulldogs could not quite close the gap late against one of the top teams in the state on Friday, falling 3-1 at home to Pickens.

Despite being close to .500 overall, Cedartown is 0-4 in region play.

“This new region for us is very good in soccer,” first-year head coach Stuart Morse said. “Every match is a fight. All of the teams are very well coached and they have great players.”

Morse stated that he is enjoying his first year leading the boys program, as the guys are talented, competitive, and a joy to coach.

“I think that Mario Maldonado has stepped up recently with his leadership. He has a lot of love for the game and he gets all the guys fired up,” Morse said. “Nery Juarez, Leo Segura, and Romario Venegas have all stepped up their game on the field. It seems like they have really developed their skill over the season and it is showing in the games.”

On the girls side, though, Cedartown has already gotten over the hump of winning region game No. 1. The Lady Bulldogs started the season 1-8, but won back-to-back contests last week to improve their overall record to 3-8.

The Lady Bulldogs returned to action in a losing effort to Donoho last Monday, as the Lady Falcons celebrated a 1-0 win at Doc Ayers Field. However, Cedartown bounced back with two wins to end last week’s play. The Lady Bulldogs shutout Hiram 2-0 on Tuesday before earning their first region win of the year with a 2-0 triumph against Pickens.

First-year head coach Nancy Flores Martinez said she is proud of the team’s effort so far in the season.

“First of all, I want to thank coach Morse and my assistant coach and sister, Ana Flores, for all the help this season,” Martinez said. “The girls are working very hard on and off the field. I’m very proud of the way they have stepped up.”

Martinez said a big reason why they defeated Pickens was due to their defense.

get Pickens offside,” Martinez said. “As for shooting, we have had trouble getting shots from our strikers. It is something we have been working on daily. We had a goal from Nancy Barrientos, who followed through until the ball hit the net, and a goal from Maritza Nunez, who took advantage of a perfect through ball and placed it perfectly.”

Although the Lady Bulldogs have several veterans on the team, some of the high impact players have been underclassmen.

“I am especially proud of Melissa Bahena, a freshman who communicates with the girls from start to finish. She is very vocal on the field and we need that. I love her leadership,” Martinez said. “She leads our defense along with Liyah Washington, who joined us midseason due to basketball. Both Melissa and Liyah are key players for us.”

While both coaches are proud of their respective squads, each side is still looking for a way to push for the playoffs late in the region schedule.

“I am looking for the senior class to really take control of this team on the field,” Morse said. “We only have a few weeks left on the season and I want that class to go out on top.”

“A big improvement we hope to see from the girls in the coming weeks is to get more shots on goal during our games,” Martinez said. “This is something we are working on daily. We need to increase the number of shots we take to be able to score.”

Panthers bet on talented underachievers at deadline with low-risk moves

Back on air after Sharon Osbourne got fired, 'The Talk' hosts explain what happened

Michigan congressman goes public on PTSD from US Capitol attack