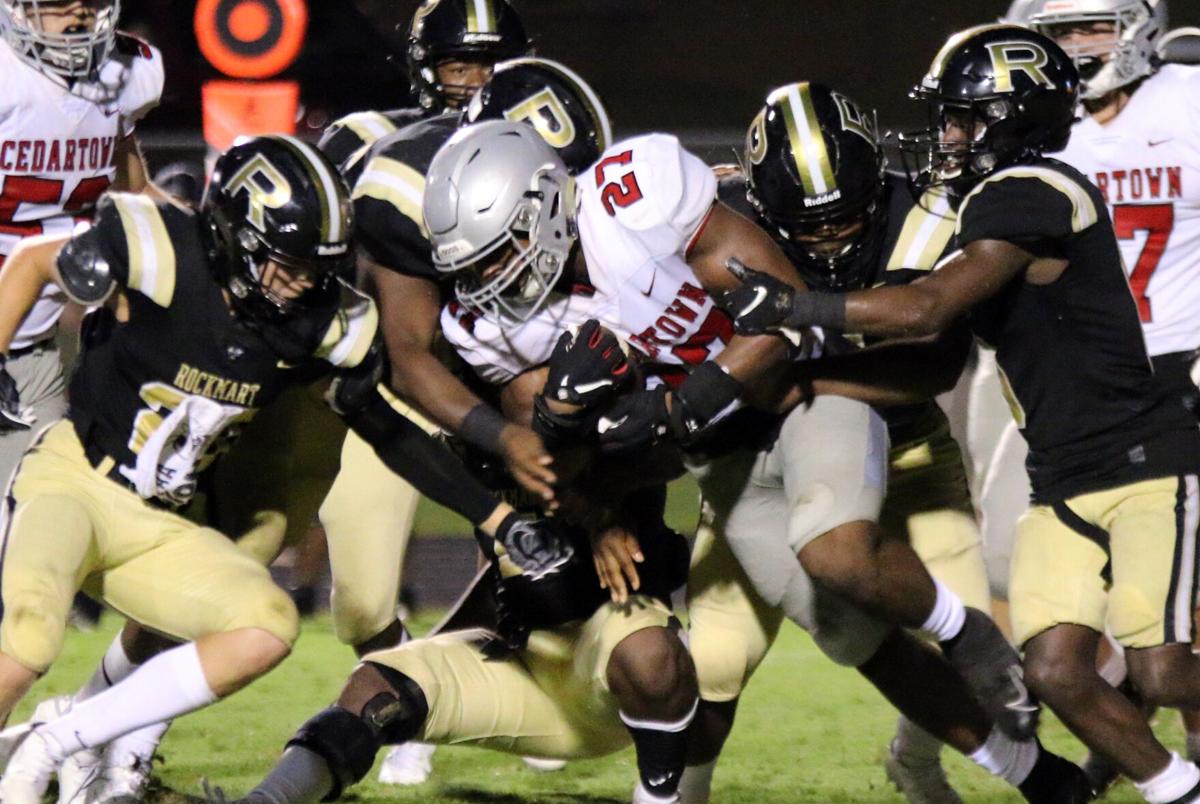 Cedartown’s CJ Washington (27) fights for yardage against a host of Rockmart defenders during Friday’s game at Rockmart High School. 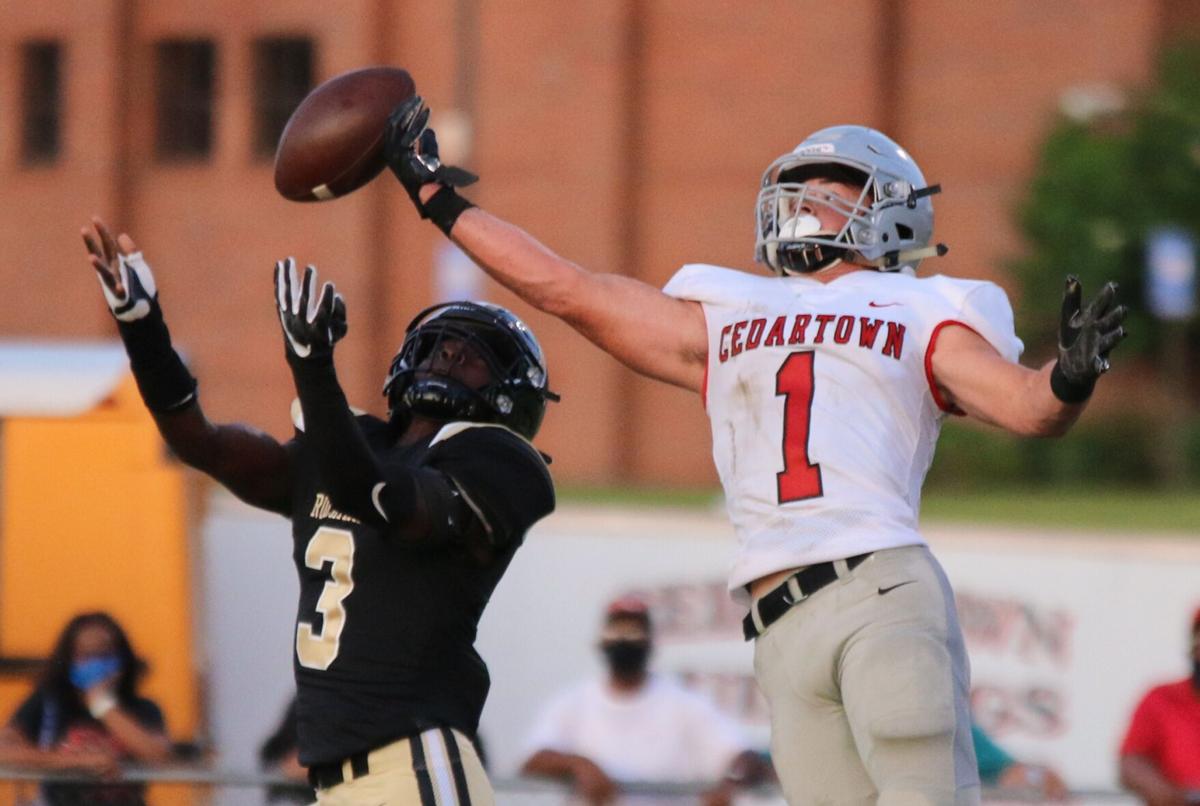 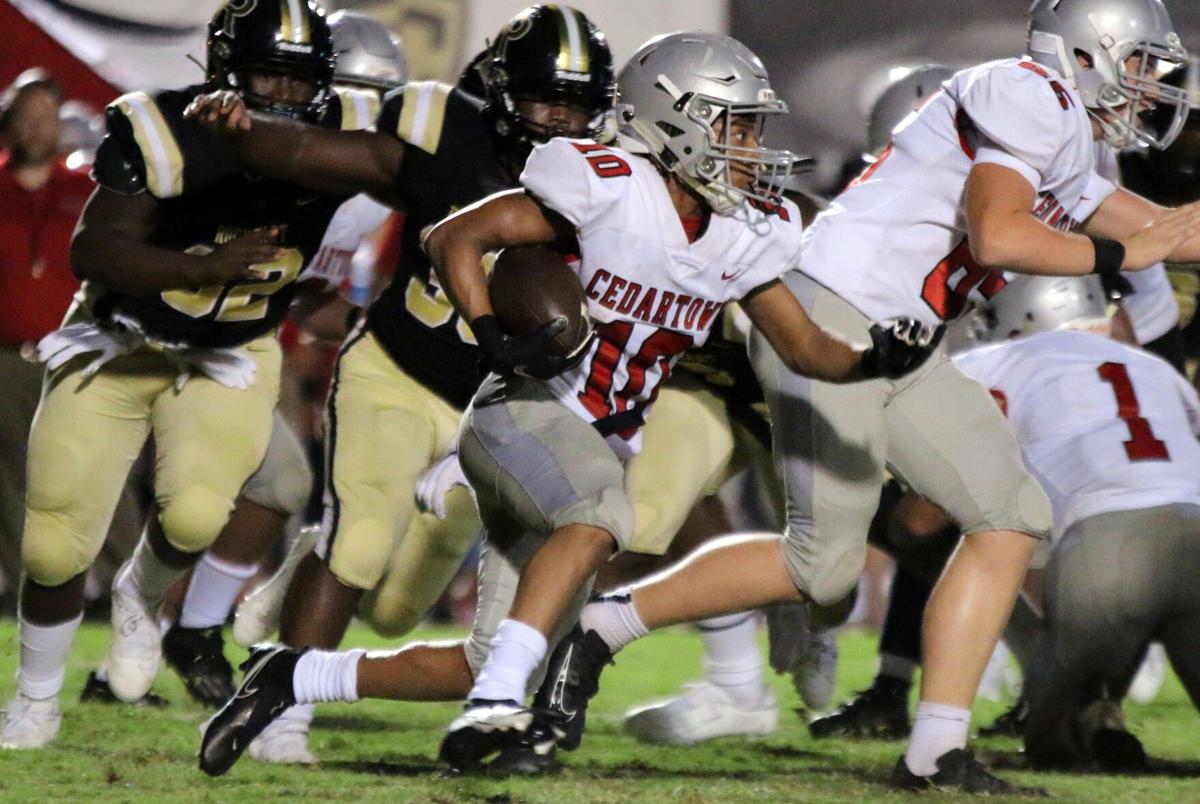 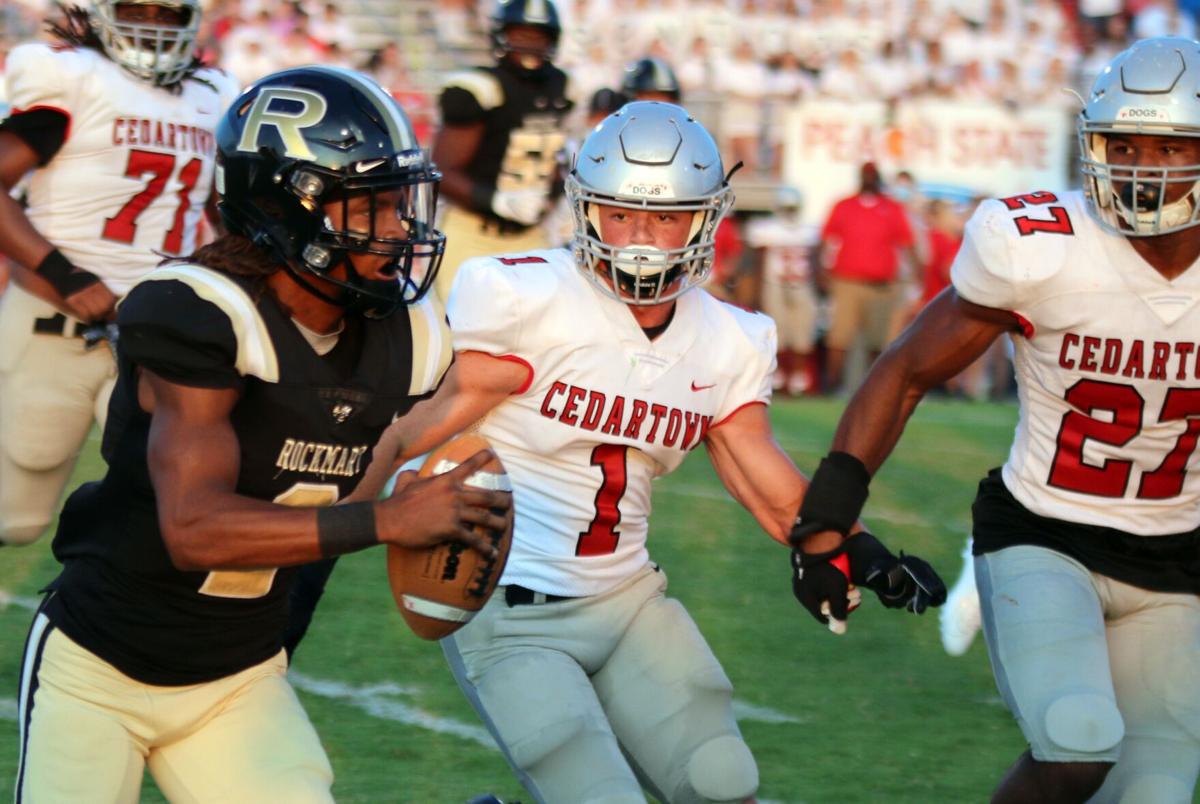 Cedartown’s CJ Washington (27) fights for yardage against a host of Rockmart defenders during Friday’s game at Rockmart High School.

A pair of touchdowns in the second quarter — one on defense — built the Rockmart charge that lasted for the rest of the game as the Yellow Jackets held on for a 21-10 win over cross-county rival Cedartown on Friday night.

The contest, held at a The Rock with a limited capacity crowd, saw both teams deal with mistakes and penalties that left the outcome up to the one that took advantage of the best opportunities.

With Cedartown up 7-0 after the first quarter, Rockmart was the first to take firm hold of an advantage in the game as Travis Brown scooped up a Bulldog fumble and sprinted about 45 yards to the end zone.

Brown then tackled Cedartown quarterback Reece Tanner on the ensuing possession for a 4-yard loss after a 15-yard penalty on the Bulldogs. Both miscues led to a punt by Corben Cuzzort that was tipped by Dalvin Millhollan and went just 8 yards to the Cedartown 30.

Rockmart quarterback Javin Whatley helped push the Jackets further into Bulldog territory and Jai Penson then ran into the end zone from 2 yards out with 16 seconds to go in the half. Jose Alegria hit his second of three extra points and Rockmart went into halftime up 14-7.

The win was Rockmart’s third straight in the series against its Polk County brethren and its first win of the season after a tough 28-21 loss to Rome High in the season opener. Afterwards, head coach Biff Parson reflected on his team’s performance.

“Oh wow, this is probably one of the … that was as bad of a game that we’ve played in four years. And it starts with me as far as, I mean, our organization, getting kids on and off the field. We just didn’t have a fire in our belly, and that concerned me with playing this game. We’ll figure it out,” Parson said.

Cedartown (0-1) got on the board first when Cuzzort capped off a short drive with a 5-yard touchdown run in the first quarter with Gia Jacobo making the point after.

Jacobo would be responsible for the Bulldogs’ only other points as he hit a 32-yard field goal with 6:10 left in the third quarter to end a labor-intensive possession for Cedartown to start the second half.

“I thought early on we did some really good things, we just didn’t capitalize on a lot of opportunities that we had,” first-year Cedartown head football coach Jamie Abrams said.

“We shot ourselves in the foot a bunch. The good thing is we can fix a lot of the things that happened tonight. We didn’t have a scrimmage and didn’t have a lot of stuff under our belt, so we’ve got to go back to work.”

Cedartown ended the night with four turnovers and 13 penalties, eight of which came in the first half for a total of 95 yards. Whatley threw two interceptions as Rockmart struggled with penalties mostly in the second half and finished with 12 total.

Rockmart’s Jakari Clark had two interceptions, while Dedric Gibson had another. Cedartown’s Cuzzort and Harlem Diamond had an interception each.

The Jackets (1-1) finished with 171 yards of offense, 90 of which came in the air, while the Bulldogs did better on the ground with 134 rushing yards compared to 57 passing.

The biggest offensive play of the night for either team came in the third quarter when Whatley connected with Dennis Sims for a 47-yard pass that brought Rockmart down to the 1-yard line. JoJo Haynes then pushed his way over the goal line on the next play with 3:05 left to set what would ultimately be the final score.

Parson said he felt his players get gassed in the second quarter as Cedartown drew out a long possession, leaving Rockmart’s defense on the field for a good amount of time.

“They were mashing us pretty good. We were winded and then we couldn’t get anything sustained offensively,” Parson said. “That was shocking for us and, you know. Credit to coach Abrams and those guys for playing hard and being physical.”

It was the first game of the season for Abrams and the Bulldogs after they were forced to cancel their original season opener against Carrollton after a couple of players tested positive for COVID-19 and were quarantined.

Cedartown will have its first home game of the season Friday hosting Calhoun, which comes into the non-region tilt at 1-1.

“I thought we did some good things. I thought we handled and dealt with the quarterback well for the most part. He’s just a heck of a player,” Abrams said. “So we’ve got to go back to the drawing board. We’ve got another really good football team staring us down the barrel.”

Rockmart will be off this week with its first of two scheduled bye weeks of the season before traveling to Dalton on Sept. 24 to open Region 6-3A play with Coahulla Creek. Parson said he hopes to be able to fix some of the mistakes he saw in the meantime.

“We’re grateful to have a win … but it was eye opening to see some of the things that we saw tonight. It’s a good thing that we’ve got an off week so we’ve got some days to fix it,” he said.