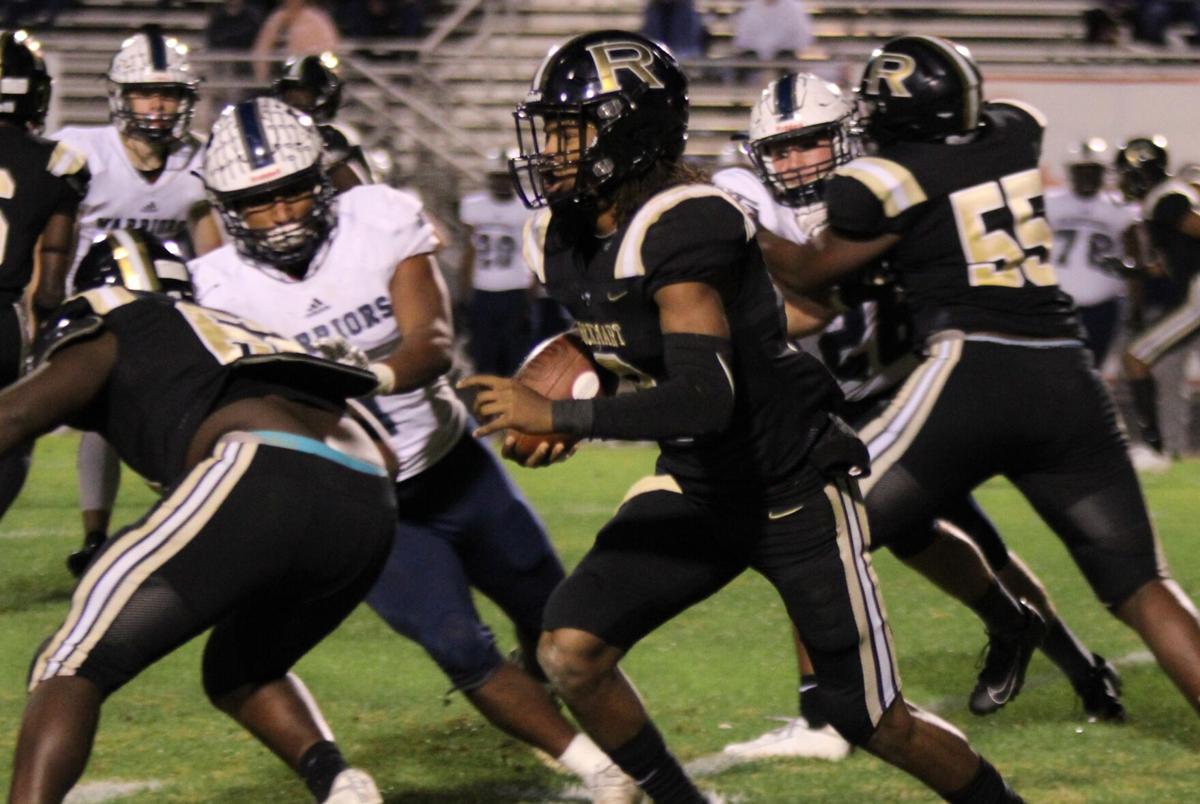 Rockmart quarterback Javin Whatley makes a move to the outside as linemen Zay Middlebrooks (left) and Sherman Davis provide the blocks in a playoff game against White County. 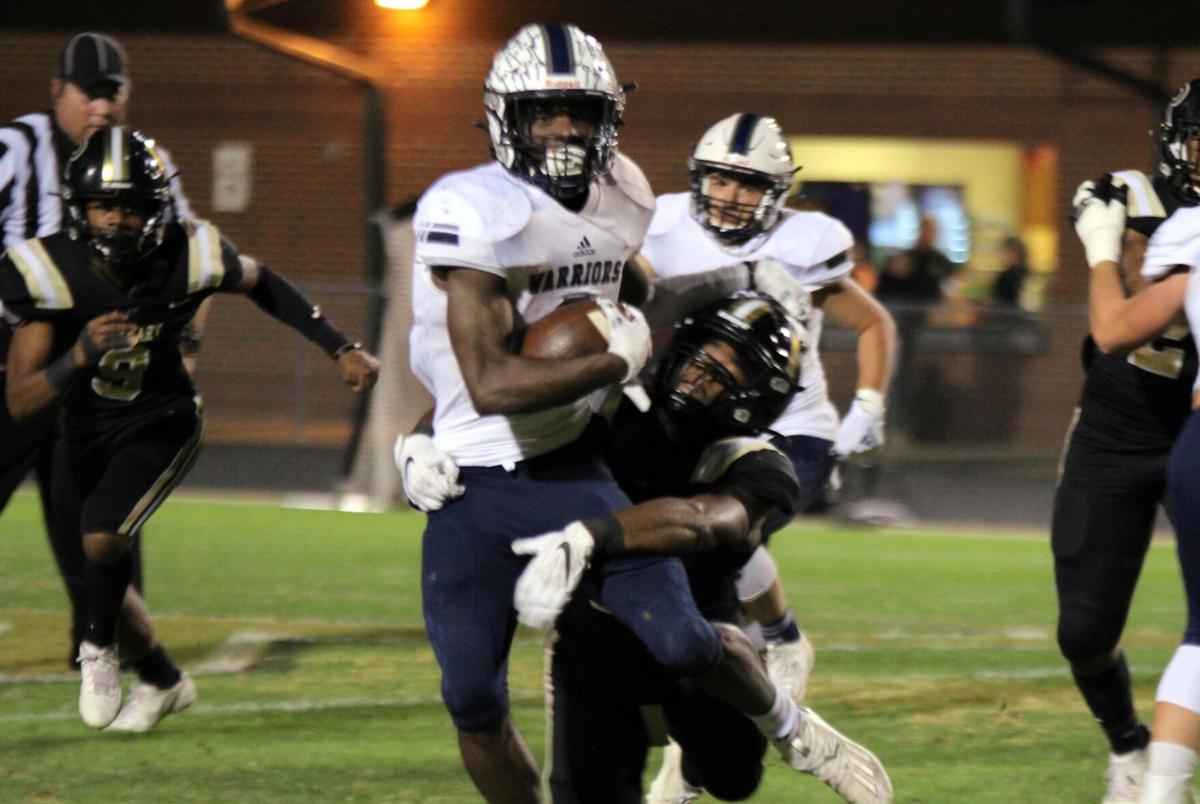 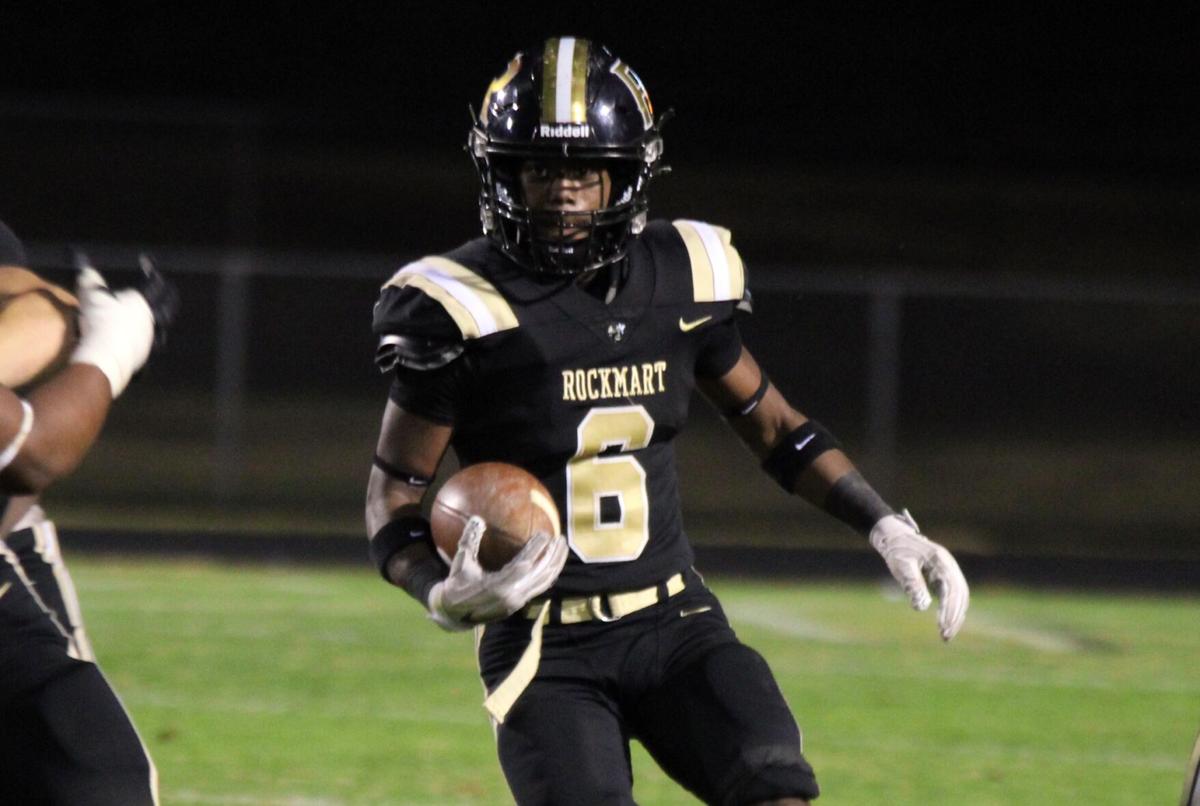 Rockmart’s Keyshaun McCullogh looks for space to run through the White County defense during Friday’s game at Rockmart High School.

Rockmart quarterback Javin Whatley makes a move to the outside as linemen Zay Middlebrooks (left) and Sherman Davis provide the blocks in a playoff game against White County.

Rockmart’s Keyshaun McCullogh looks for space to run through the White County defense during Friday’s game at Rockmart High School.

Fighting for four quarters, Rockmart had to focus to stay on the path to victory Friday night. And Javin Whatley provided the key punches.

The senior quarterback, who has exhibited speed and agility for the Jackets throughout his career, maneuvered his way to a dominating performance by being a part of six touchdowns in Rockmart’s 48-35 win over White County.

The win marks the fifth year in a row the Jackets have won in the first round of the postseason, each time in front of a home crowd.

Rockmart, the Region 6-3A champion, moves on to the second round of the Class 3A state playoffs to face what is likely to be its toughest challenge yet this season. Top-ranked Cedar Grove, which was slotted third in its region after forfeiting four games because of an ineligible player, will visit The Rock this Friday after defeating Monroe Area 31-12 in the opening round.

Against White County, however, Whatley had 280 yards rushing on 28 carries for three touchdowns, threw two touchdowns to Dennis Sims while amassing 100 yards passing, and scored on an 80 yard kickoff return in the third quarter that served as a swift answer to White County’s nine-play, 50-yard scoring drive to start the second half. That’s 460 total yards for the Rockmart signal caller.

“The thing about Javin, it’s crazy. When he knows there’s competition he rises to the occasion, and that’s a sign of a good football player. So I’m super proud of how he played and how our whole team just kind of fought through the whole game,” Rockmart head coach Biff Parson said.

The No. 7-ranked Jackets (10-1) were aware they would have their work cut our for them after getting paired up with White County, which finished the regular season as the No. 4 seed out of Region 7-3A but had gotten back its preseason All-State quarterback, J.Ben Haynes, a few weeks ago after an injury kept him out of a pair of midseason region games the Warriors lost.

Haynes was 10-of-18 for 223 yards and two touchdowns against the Jackets, while also rushing for 48 yards and another score.

“They’ve got some good football players, good coaches and they gave us a battle. We knew they weren’t gonna quit. And anytime you got somebody that can sling it like that quarterback he always can keep you in the game,” Parson said.

White County (7-3) was down 20-0 after the first quarter but recovered quickly to go into halftime down 27-14. The Warriors put together a pair of scoring drives in the third quarter that were separated by Whatley’s kickoff return touchdown to pull within six points of the Jackets.

Whatley took charge on the ensuing possession, zigging his way through the opponent’s defense to get into White County territory. He then capped the 65-yard drive with a thrilling 26-yard touchdown pass to Sims, who leaped into the air under coverage in the end zone and came down with the ball.

The Warriors appeared to be back in control on the following possession until running back Silas Mulligan coughed up the ball near the sideline and Rockmart recovered.

A 10-play, 77-yard drive included Whatley converting on fourth-and-3 with a keeper and then setting up JoJo Haynes with an 8-yard touchdown run early in the fourth quarter to put Rockmart up 48-28.

Haynes took to the air to push White County downfield and hit Reece Dockery for a 13-yard touchdown pass with 8:50 left to play, making it 48-35.

Rockmart was forced to punt, giving the Warriors a chance to close the gap with 4:35 to go. Haynes started the possession with a 41-yard pass to Cooper Turner to get to the Jacket 39-yard line only to be stalled there after a sack in part from Rockmart’s Sherman Davis and a batted down pass to the goal line on fourth-and-25.

With 3:20 left, Rockmart took over and managed the clock, having Lanear McCrary get big gains on the ground to move the chains until a final knee by Whatley sealed the win.

“One thing we can’t coach is speed, and we’ve got a lot of it and we got to showcase it tonight,” Parson said. “We’ve just got to finish the drill. I’m super proud of this organization from top to bottom. It’s a great win. Now we’ve got to move on.”

Rockmart finished with 599 yards of total offense, with McCrary finishing with 11 carries for 76 yards. White County had 359 yards total, with Mulligan getting 72 yards and two touchdowns on 15 carries.