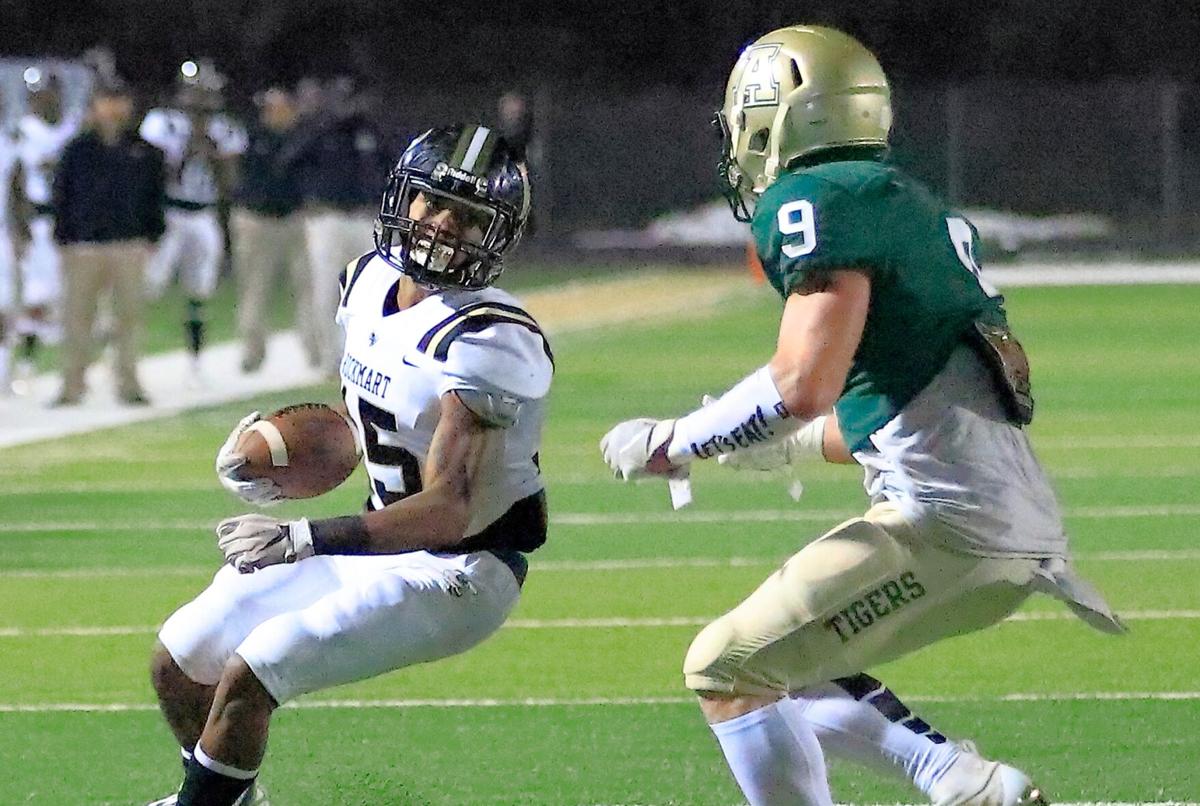 Rockmart’s Lanear McCrary (left) cuts back against Adairsville’s Eli Agnew during Friday’s game at Adairsville. The Jackets won 45-7 to stay atop the region standings. 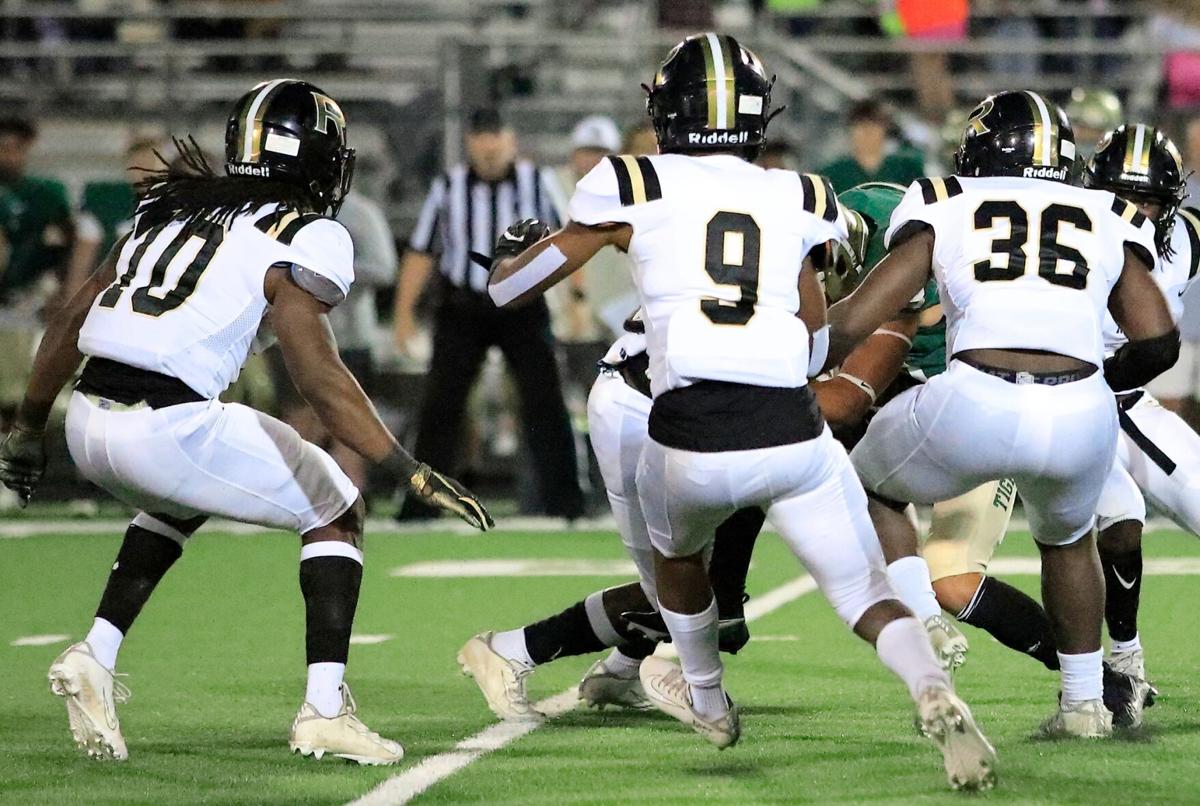 Rockmart’s Travis Brown (from left), Terrion Webb and Brent Washington all converge on an Adairsville ball carrier during Friday’s game at Adairsville. 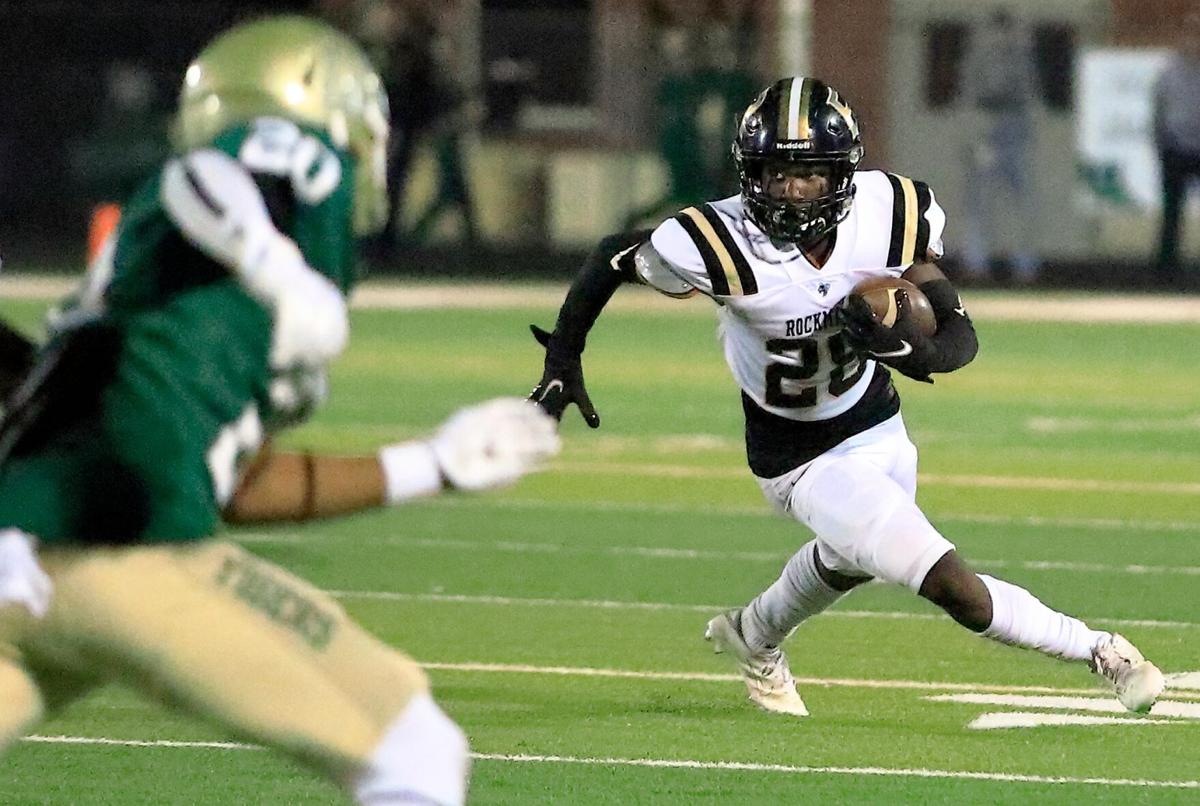 Rockmart’s JoJo Haynes runs to the outside against Adairsville during Friday’s road game in Bartow County.

Rockmart’s Lanear McCrary (left) cuts back against Adairsville’s Eli Agnew during Friday’s game at Adairsville. The Jackets won 45-7 to stay atop the region standings.

Rockmart’s Travis Brown (from left), Terrion Webb and Brent Washington all converge on an Adairsville ball carrier during Friday’s game at Adairsville.

Rockmart’s JoJo Haynes runs to the outside against Adairsville during Friday’s road game in Bartow County.

The Rockmart Yellow Jackets’ push through the final stretch of the regular season got off to a dominating start against one of their closest foes on Friday night.

Rockmart controlled the line of scrimmage early and took a 31-0 lead late into the third quarter Friday night on the way to a 45-7 win at Adairsville, which the Jackets had not played in nine years.

Rockmart used several of its weapons on both offense and defense to take the Region 6-3A road victory and pick up its seventh win in a row. The Jackets sit atop the region standings and have the inside track to a fourth consecutive region title with LaFayette and Ringgold left on the schedule.

Javin Whatley returned as Rockmart’s starting quarterback after playing at running back for most of last week’s game against Murray County. The senior scored on a 2-yard run with 3:01 left in the first half to cap a 99-yard drive.

Whatley then hit Dennis Sims on a 32-yard touchdown pass on the Jackets’ first drive of the second half to put them up 24-0 after Jose Alegria’s kick on the extra point. Alegria was a perfect 6-of-6 on PATs and ended the first half with a 19-yard field goal after Dedric Gibson intercepted an Adairsville pass with just over two minutes left.

Rockmart (7-1, 6-0 6-3A) didn’t score in the first quarter, but Lanear McCrary kept the Adairsville defenders on their toes during the first half as Rockmart scored on three of its first four possessions.

The second half saw the Jackets’ Terrion Webb score on a 32-yard fumble recovery and Keyshaun McCullough spearhead a six-play, 73-yard drive capped off with a 33-yard touchdown run by the junior to put Rockmart up 38-7 with 5:53 to play.

Adairsville (5-3, 4-2) attempted a 50-yard field goal with less than a minute to play, but the low kick was blocked by Rockmart’s Sherman Davis and Sims managed to recover the loose ball and race nearly 80 yards down the field for the final score of the game.

The Jackets managed to cut down on their penalties against the Tigers, but some still managed to disrupt scoring opportunities.

A holding call negated a touchdown run by McCrary on the opening drive of the game and led to Alegria to attempt a 44-yard field goal. A bad snap never gave the freshman specialist a shot at making the kick.

Play was stopped for about 10 minutes early in the fourth quarter when a fight broke out near the bottom of the home stands. Several Adairsville players reportedly jumped into the stands and began participating in the fight before police and spectators managed to get the situation under control.

No one was seriously hurt and the Adairsville players were allowed to return to the field and played during the remainder of the game.

After the distraction, Adairsville attempted to draw Rockmart offsides on fourth-and-1 at the Tigers’ 49-yard line, but the offense jumped first and called for a false start.

Adairsville was forced to punt and the ensuing drive was capped by McCullough’s touchdown to seal the victory for the Jackets.

Rockmart will host LaFayette at The Rock this Friday for Senior Night. The Ramblers lost to Sonoraville 42-38 on Friday night.