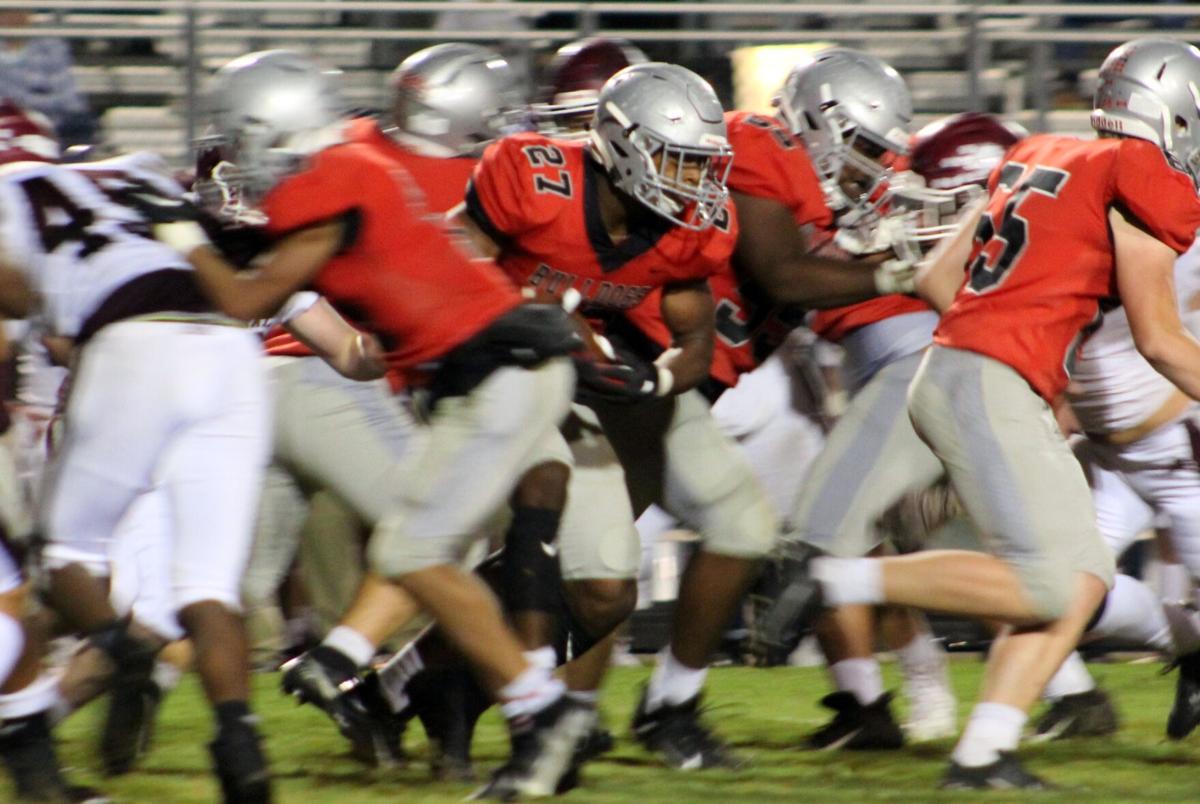 Cedartown’s CJ Washington (27) works his way through the middle of the line against Central-Carroll during Friday’s game at Doc Ayers Field at Cedartown High School. The Bulldogs won 34-7 to clinch the Region 7-4A title. 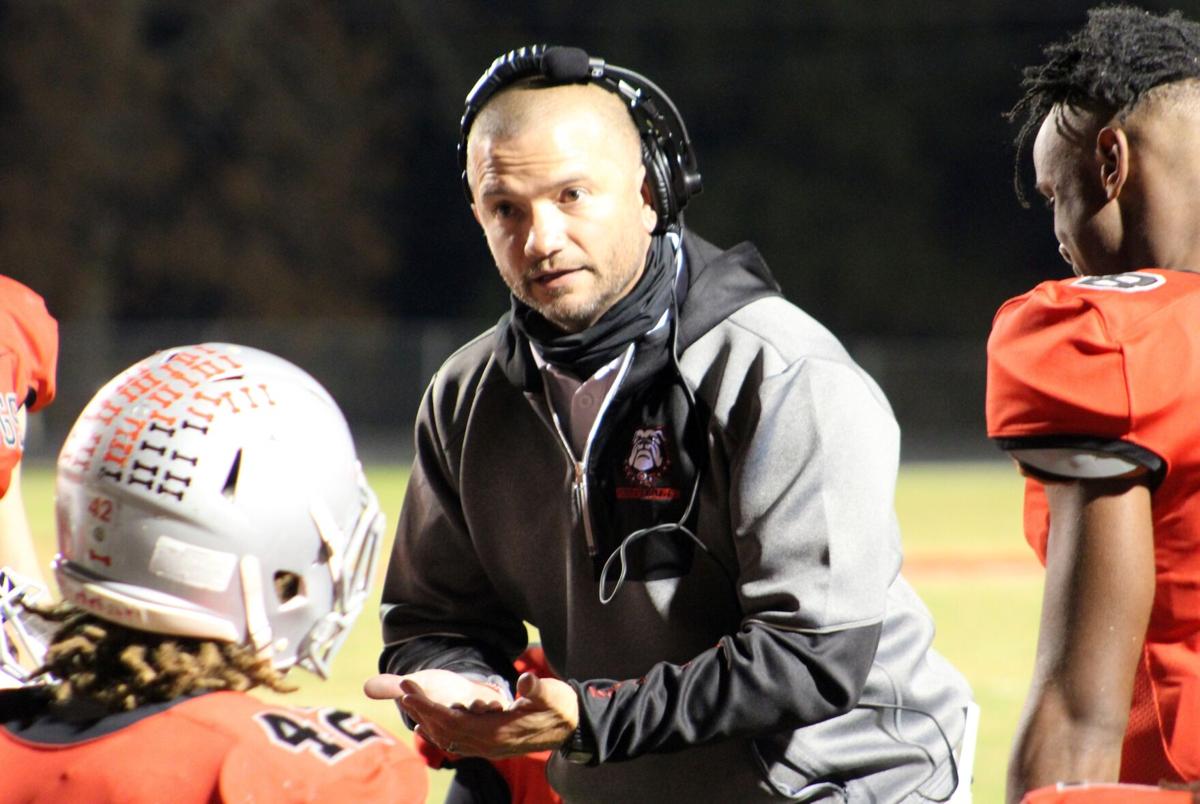 Cedartown head football coach Jamie Abrams talks to his players during a timeout late in the first half of Friday’s game against Central-Carroll. 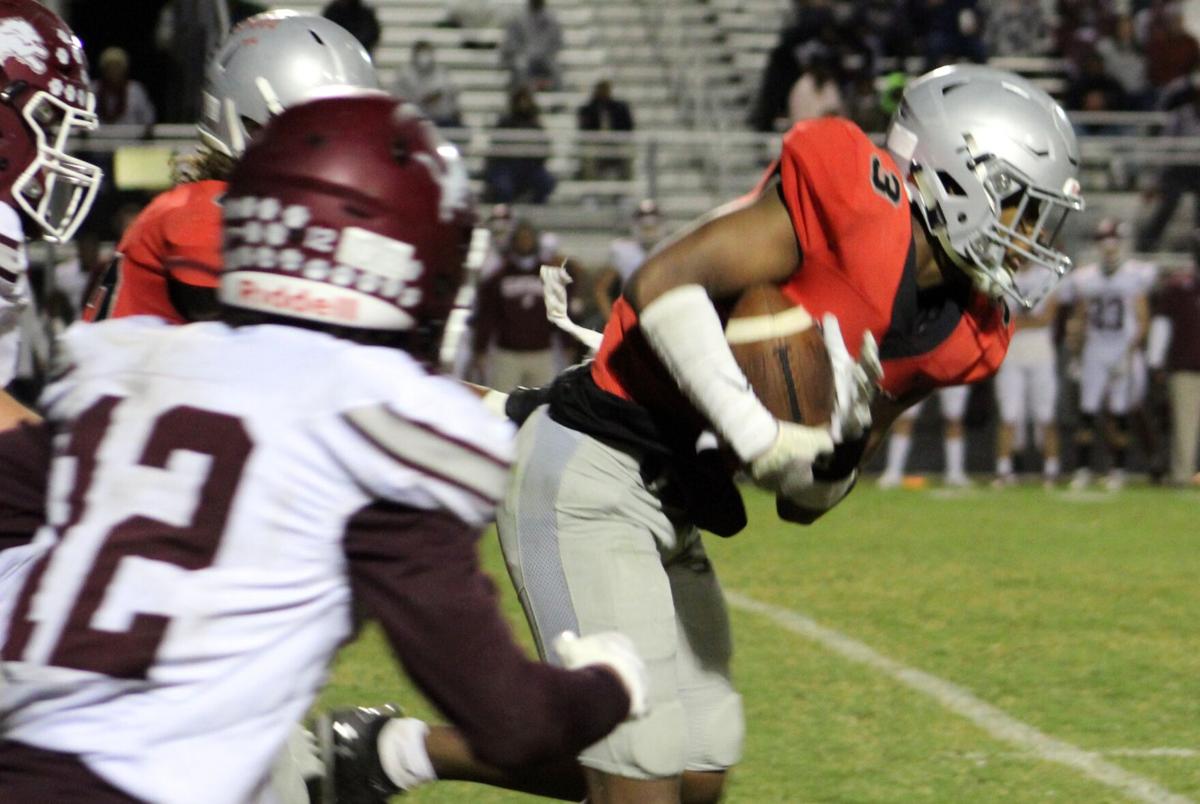 Cedartown’s Jayden Johnson get ahead of a group of Central-Carroll defenders after making a catch during Friday’s game.

Cedartown’s CJ Washington (27) works his way through the middle of the line against Central-Carroll during Friday’s game at Doc Ayers Field at Cedartown High School. The Bulldogs won 34-7 to clinch the Region 7-4A title.

Cedartown head football coach Jamie Abrams talks to his players during a timeout late in the first half of Friday’s game against Central-Carroll.

Cedartown’s Jayden Johnson get ahead of a group of Central-Carroll defenders after making a catch during Friday’s game.

The wait of 19 long years was ended with one dominating performance for the Cedartown High School football team.

Putting their mark on the first quarter and having their defense take the lead from there, the Bulldogs defeated Central-Carroll 34-7 on Friday night at Doc Ayers Field.

The win clinches the Region 7-4A championship for Cedartown, the first title of its kind for the team since 2001 and the first under first-year head coach Jamie Abrams.

“It feels good, and it ain’t about me,” Abrams said. “It’s about all these guys right here. You know, these guys have just been resilient with everything that’s been going on. So I’m just as proud as I can be. These guys, these coaches. I mean, I’m just proud of them.”

Cedartown (6-2, 4-0 7-4A) is guaranteed to host the first round of the Class 4A state playoffs on Nov. 27 against the No. 4 seed from Region 6-4A. That is likely to be Arabia Mountain, although the final week of the regular season could change that.

The Bulldogs wasted little time building a three-touchdown lead in the first quarter.

Central-Carroll (5-3, 1-2) was set to receive the opening kickoff when both of the Lions’ returners failed to get the ball. It rolled down to the 1-yard line and Cedartown’s Jordan Johnson jumped on it.

CJ Washington ran it in on the next play to give the Bulldogs the 7-0 lead with only 12 seconds ticked off the clock.

After Central was forced to punt on the ensuing possession, Cedartown struggled to move the ball at first but converted on third-and-13 with a 15-yard pass from quarterback Reece Tanner to Jayden Johnson.

Washington got the handoff on the next play and went between the tackles before shaking off one last Lion defender on a 68-yard touchdown run. Eri Velasquez made his second of four extra points to put the Bulldogs up 14-0.

Cedartown got the ball back one last time in the opening period after another Central punt. This time a one-play, 63-yard drive would give the Bulldogs touchdown No. 3 as Tanner hit Johnson for a short pass over the middle and the senior South Carolina commit took it from there.

It took Cedartown just six plays to roll up 148 yards of offense and build a 20-0 lead in its first game after having last week off.

“I was a little pleased with that because after our last bye week we played pretty poorly in the first quarter when we came back,” Abrams said. “The big thing is, and I told them this at halftime too, we’ve just got to execute things to the details of the assignment. We do things, but we don’t do the little things. So just focusing on trying to execute the details.”

The Bulldogs finished with 408 yards of offense with a balanced attack that resulted in 216 yards rushing and 192 in the air. Central finished with 116 yards of total offense as Cedartown’s defense shut their opponents down.

The Lions’ leading running back, Narada Levett, who led the state with 1,622 total yards rushing coming into the game, was held to just 19 yards on 16 carries.

Central’s longest play of the evening came on its final one as quarterback Beau Ivy managed to find Korben Waldrop in the end zone on an 18-yard pass with around three minutes left to play.

The Lions threatened to score late in the second quarter after a botched snap on a punt put the ball on the Bulldogs’ 9-yard line with 1:40 on the clock. A short pass to get down to the 7 on second down was followed by back-to-back incompletions by Ivy to turn the ball over to Cedartown on downs.

Abrams said the win was a complete team effort, but it did still show some areas where they need to improve, especially now that they have secured their spot in the state playoffs..

“We got ourselves out of some bad situations offensively by throwing the football. And defense has been playing pretty well this year. They kind of gave them some things a little bit in the way that we lined up and played them in order to take the running back away. They’re a well-coached football team, so hats off to them,” Abrams said.

Johnson finished with 187 yards receiving and two touchdowns, his second coming on a 59-yard catch-and-run to cap Cedartown’s first drive of the second half. He also had four carries for 30 yards.

Patrick Gardner had eight carries for 54 yards for Cedartown, including a 5-yard push into the end zone with 7:23 left in the third quarter for the Bulldogs’ final touchdown of the night.

Cedartown will finish out the regular season next Friday as the Bulldogs travel to Catoosa County to take on Heritage.