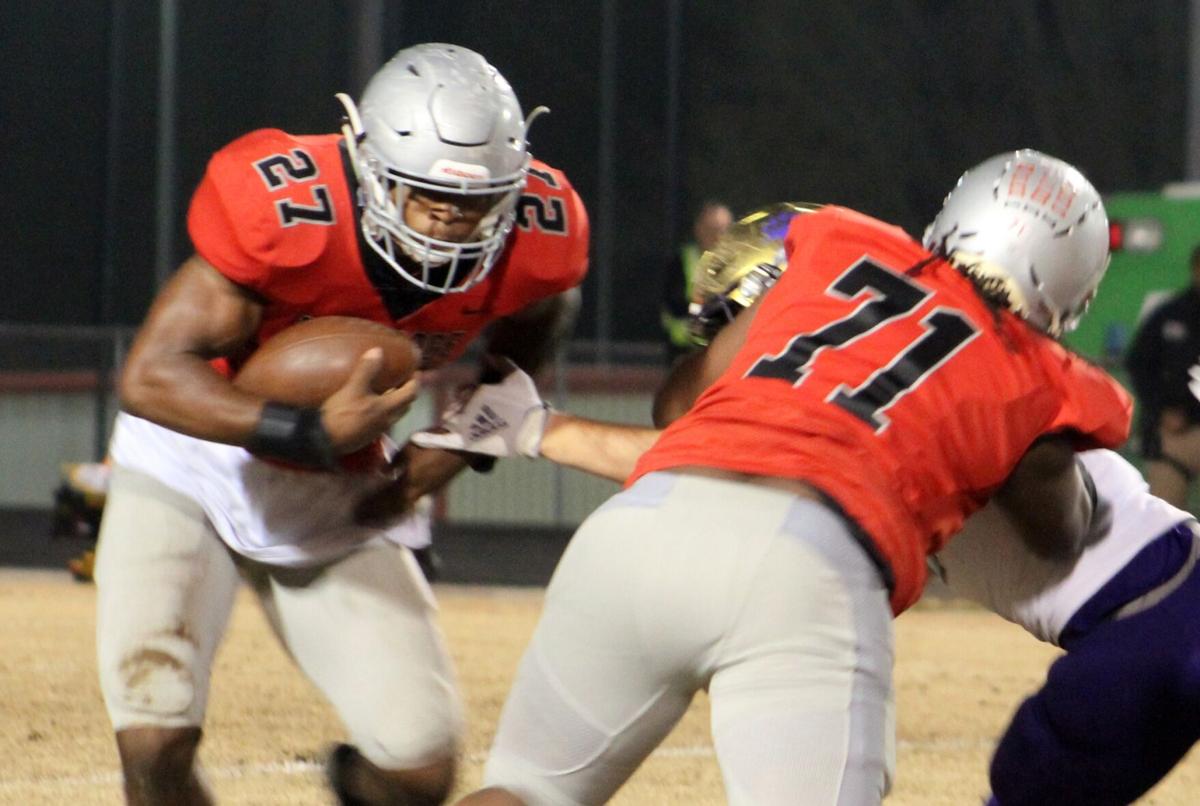 Cedartown’s CJ Washington (27) escapes a tackle from a Bainbridge player with the help of a block from teammate Jai Barnes (71) during Friday’s Class 4A quarterfinal game at Cedartown High School. 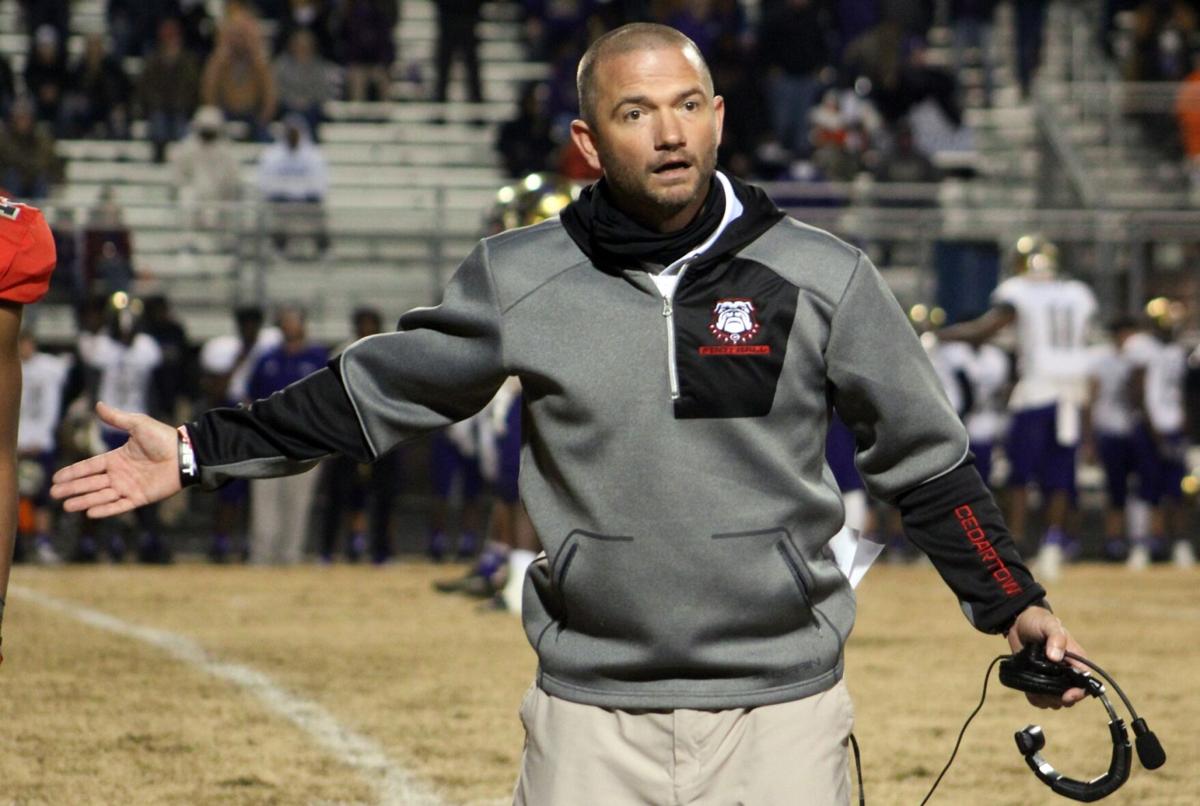 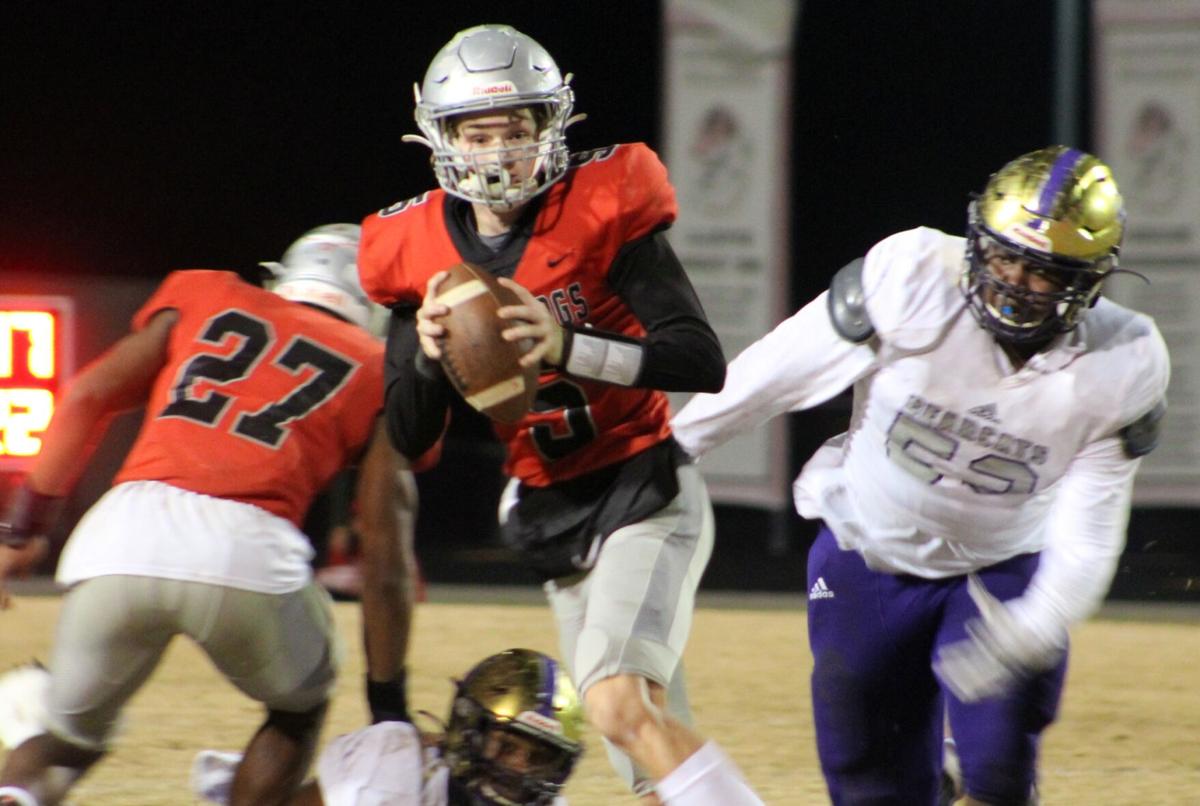 Cedartown quarteback Reece Tanner (5) moves out of trouble while looking to pass during Friday’s game against Bainbridge in the Class 4A quarterfinals.

Cedartown’s CJ Washington (27) escapes a tackle from a Bainbridge player with the help of a block from teammate Jai Barnes (71) during Friday’s Class 4A quarterfinal game at Cedartown High School.

Cedartown quarteback Reece Tanner (5) moves out of trouble while looking to pass during Friday’s game against Bainbridge in the Class 4A quarterfinals.

A team that ended one drought after another for a program that had waited for a new jolt of energy saw opportunities slip away — and stripped away — on Friday night.

Leading No. 6 Bainbridge 10-7 at halftime of the Class 4A state quarterfinal game, No. 7 Cedartown could find no offensive power in the second half as penalties and a re-energized Bearcat defense held the Bulldogs down on the way to a 21-10 win for the visiting squad.

The loss ends an eight-game winning streak and a season of renewal for Cedartown as new head coach Jamie Abrams took over and maneuvered the team through the obstacles of COVID-19 to lead them back to the Elite Eight for the first time since 2002.

The Bulldogs also won a region title for the first time since 2001, running the gauntlet to go undefeated in Region 7-4A.

“Obviously it didn’t end the way we wanted it to end. You know, the ultimate goal is the ultimate goal. But that group there that we played won a state championship two years ago, their a dang good football team. We went toe to toe with them, got banged up a little bit, didn’t get any breaks really,” Abrams said.

“Obviously, it wasn’t what we were looking for, but I’m proud of the seniors. I just told them that they left the program better than they found it and, you know, that’s what we’re trying to do is build a program, not just have a team of 2020.”

Cedartown (8-3) was down 14-10 heading into the fourth quarter and was driving after forcing Bainbridge to punt.

The Bulldogs took advantage of an offside call on the Bearcats to get a first down and closer to midfield, but Jayden Johnson, who had gone down twice with cramps in the third quarter, was caught for a 5-yard loss by Bainbridge’s Dontavious Broadnax on second-and-7.

A high snap on the next play left sophomore quarterback Reece Tanner scrambling to throw the ball away, leading to a Cedartown punt.

The Bulldogs were called on a late hit out of bounds on the first play of the next series for Bainbridge That gave the visitors a boost on a drive that covered 71 yards in 12 plays and was capped by a 3-yard pass from Quayde Hawkins to Braxton Johnson for his second touchdown throw of the game.

Cedartown got back on offense with just over five minutes left to play and opened the possession with a 19-yard pass to get to midfield. But officials called the Bulldogs for a false start penalty and moved them back to their own 26-yard line instead.

Three pass plays got Cedartown to the 39 and fourth-and-3 to go. Tanner tried to connect with Johnson but the pass went incomplete, turning the ball over on downs with 3:22 left.

Bainbridge (10-3) turned to its workhorse running back, Rashad Broadnax, who picked up yardage on every carry of the next drive, converting twice for first downs and running out the clock despite Cedartown using all three of its timeouts.

Cedartown had 264 total yards of offense in the game, but only 39 in the final two quarters.

Georgia commit CJ Washington led Cedartown with 109 yards on 17 carries and was instrumental in setting up the Bulldogs’ lone touchdown of the night.

After being held to four-and-out drives following an interception and a fumble recovery, Cedartown got the ball after a Bainbridge punt just before the end of the first quarter.

Washington and Johnson — who is committed to Arkansas — kept the chains moving as Cedartown picked up four first downs and completed an 82-yard drive with a 26-yard pass from Tanner to a wide-open Jeremiah Johnson.

“That was actually just a really good heads-up play by Reece and Jeremiah,” Abrams said. “The corner, for whatever reason, didn’t didn’t cover (Jeremiah). But Jeremiah didn’t make a scene about it, and Reece saw it and they just kind of connected on it.”

Eri Velasquez kicked the extra point, adding to his 21-yard field goal at the end of the game’s opening possession.

The ensuing drive became a grudge match between the two teams that made its way down the field and saw Bainbridge get its first big yardage of the night.

Hawkins hit Ahmari Borden for an 11-yard pass on third-and-10 that put the Bearcats on the Cedartown 4. Rashad Broadnax then caught a quick pass just outside the goal line and lunged forward as the Bulldogs’ Micah Arbuthnot tackled him. The side judge called a touchdown as Arbuthnot sat on the field in disbelief.

With just 45 seconds to go before halftime, Cedartown pushed to get more points on the board and had solid success, using a 23-yard pass from Jayden Johnson to Jordan Johnson and a 27-yard sideline sprint from Tanner to get down to the Bainbridge 11 with 4 seconds on the clock.

But Velasquez’s 27-yard field goal attempt got off to a low start and failed to get through the uprights as time expired.

Bainbridge will host No. 1-ranked Marist next week in the Class 4A semifinals, and Abrams hopes that this year’s Cedartown team has earned the program recognition from around the state after battling teams like Rockmart, Calhoun and Bainbridge this season.

“The teams that we’ve lost to, they’re kind of established programs, and to go back to this bunch right here, they’ve been doing it for a little while and they’re in the thick of things. So maybe when people mention programs in 4A, Cedartown comes up,” Abrams said.