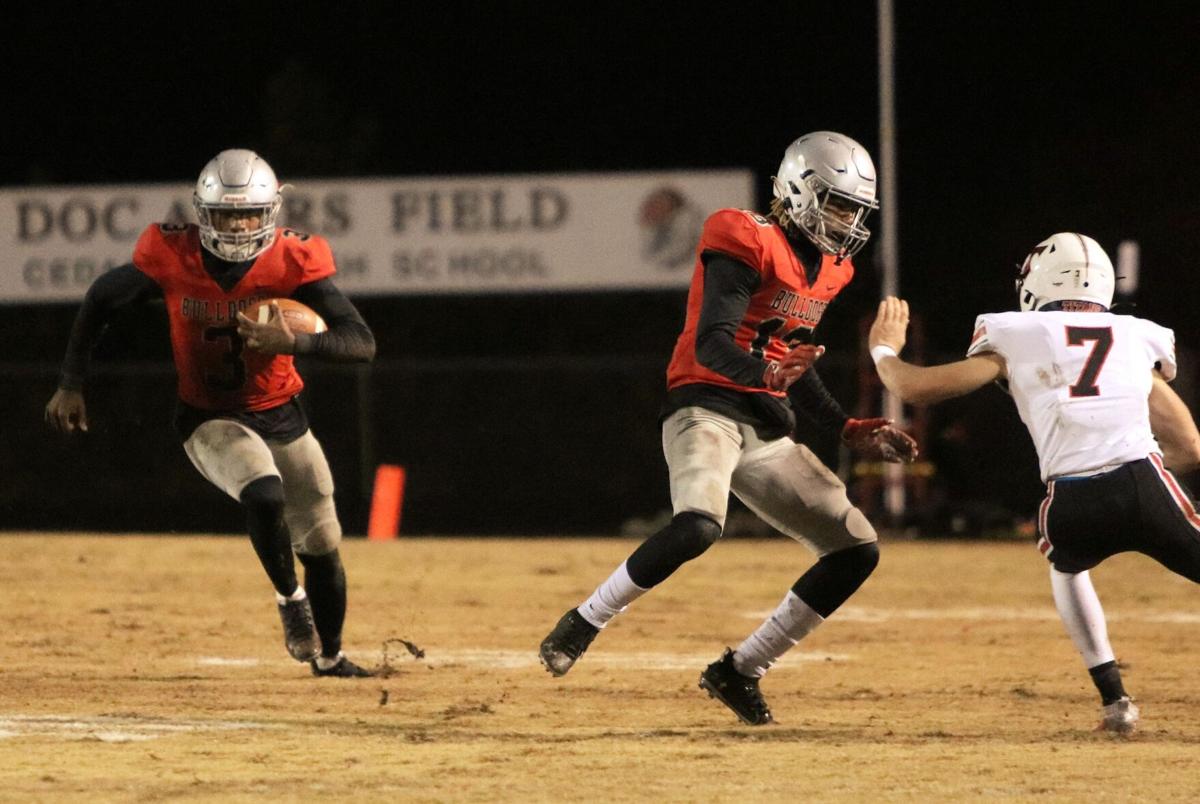 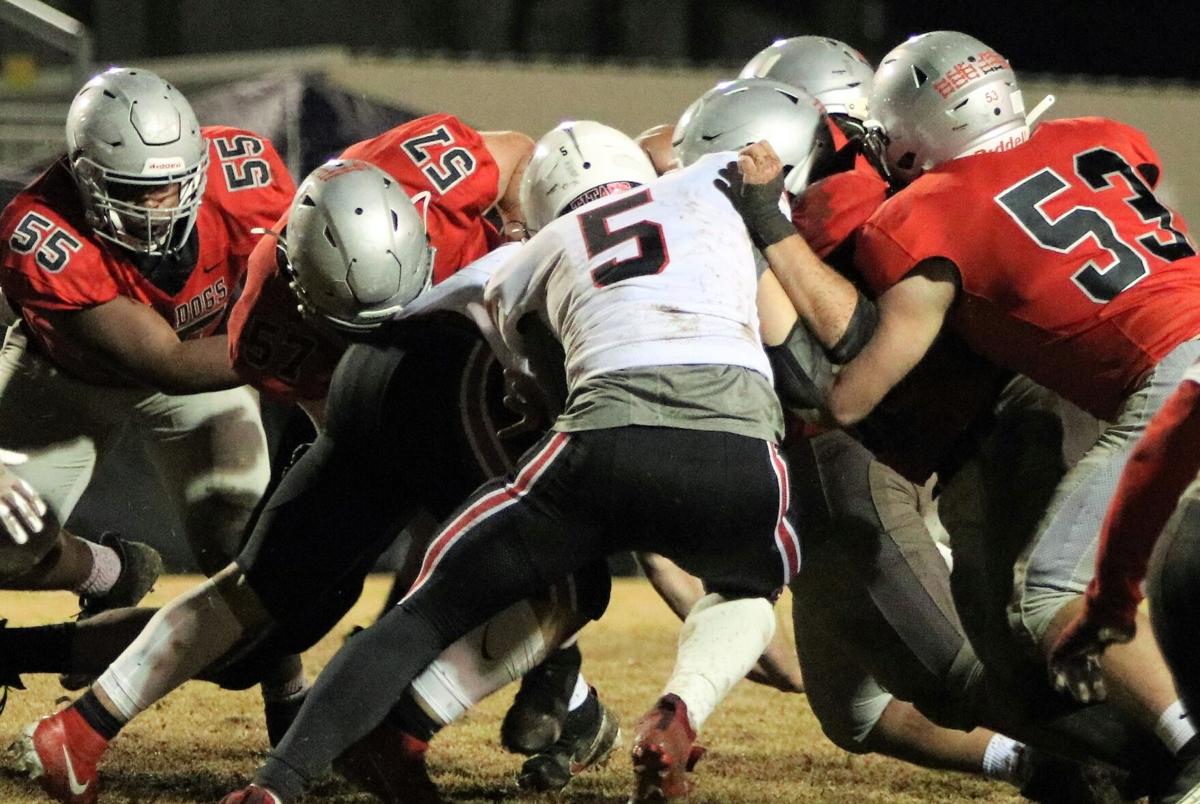 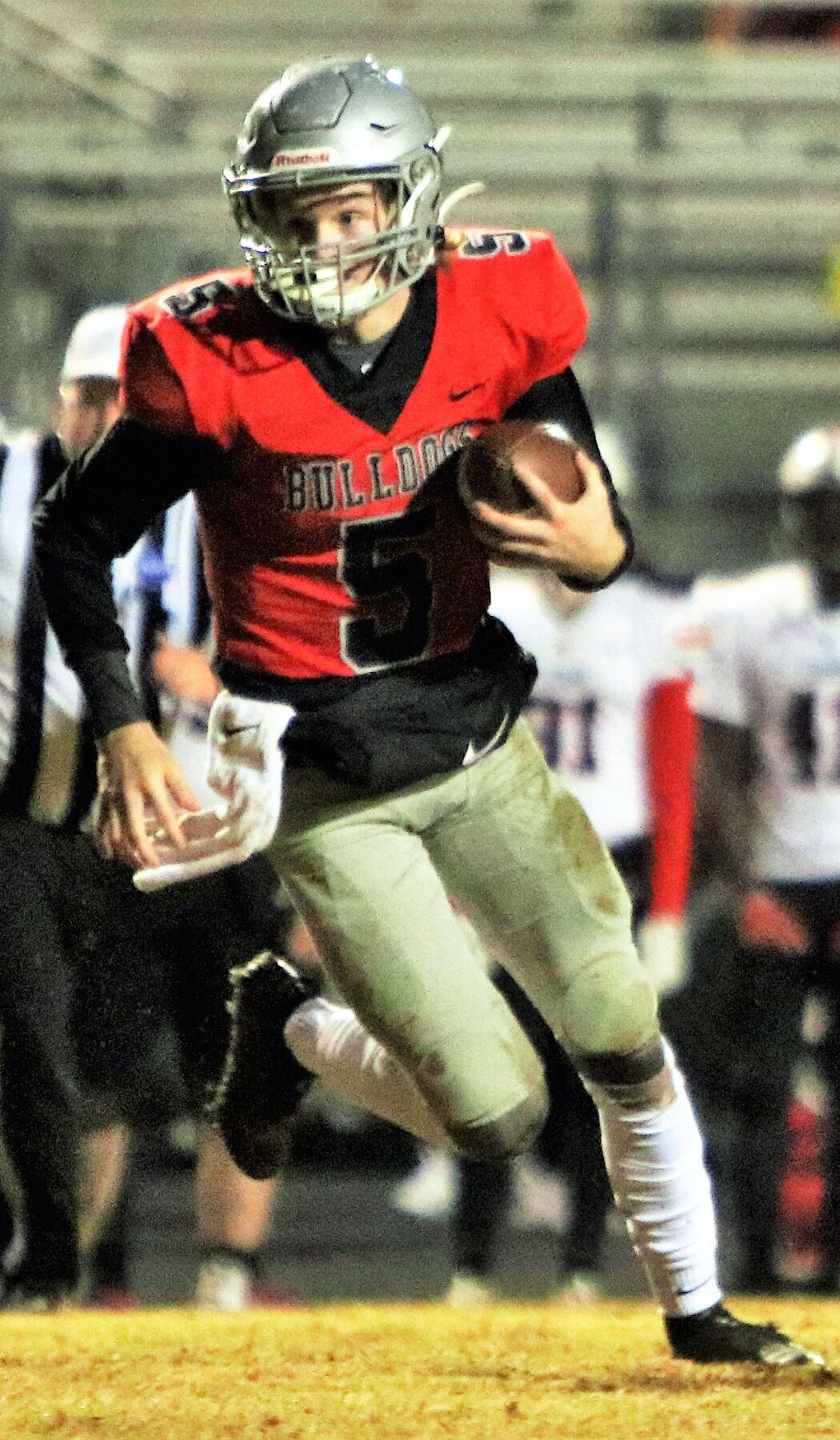 Cedartown quarterback Reese Tanner keeps the ball for a gain during Friday’s game against North Oconee in Cedartown.

Cedartown quarterback Reese Tanner keeps the ball for a gain during Friday’s game against North Oconee in Cedartown.

It was logical to call Cedartown’s second-round matchup with North Oconee a “trap game” going into the Sweet 16 contest.

But there was nothing but safe passage to be found for the Bulldogs.

Facing a Titans team that contained a stingy defense and an electrifying offense led by Clemson commit Bubba Chandler at quarterback, Cedartown struck quick and often to win 56-0 at Cedartown Memorial Stadium on Friday night.

Cedartown had not played a game in three weeks following back-to-back cancellations by Heritage-Catoosa and Arabia Mountain, but in the end none of that mattered and the Bulldogs wasted no time punching their ticket to the Elite 8.

Consecutive sacks forced a three-and-out on North Oconee’s opening drive just before a blocked punt, returned by Isaiah Johnson, saw Cedartown put the first points on the board just two minutes into the game.

On their first offensive possession, the Bulldogs found pay dirt on a 61-yard touchdown run by CJ Washington. The Georgia commit’s efforts made it 14-0 Cedartown with 4:29 left in the first, but the run game was not done yet.

Reece Tanner scored from 11 yards out on a bootleg run to put the Bulldogs up 21-0 in the first quarter.

Early in the second quarter Washington broke away for his second long touchdown run of the night — this time from 49 yards out — to create a 28-point advantage. Two more scoring scampers, a 42 yarder from Harlem Diamond and an 8-yard sweep by Tanner, gave Cedartown a 42-0 halftime lead.

North Oconee tried to sustain some drives in the second half, but their just could not keep the Bulldog offense off the field. Jayden Johnson accelerated past Titan defenders on a 71-yard run early in the third, signaling Cedartown’s seventh touchdown of the night.

Later in the third quarter, Harlem Diamond broke one tackle and was gone on a 67-yard touchdown run, creating the 56-0 score which would serve as the final.

Cedartown head coach Jamie Abrams said that he did not expect the time off to affect his team ahead of this game.

“I don’t know for sure if it was the fact that the guys were fresh without having to play the last two weeks, or what. I wish I knew, because I’d do that every time,” Abrams said with a laugh. “Our guys did a great job of staying focused, keeping themselves motivated, and it all came together.”

“Well, it’s always good to go out and get a win in the playoffs,” Abrams said after the win. “Everybody will look at the score but it doesn’t matter if it’s by one point or 100 points.”

Cedartown eclipsed 500 yards of total offense in their Sweet 16 victory. Diamond led all rushers with 166 yards and two scores on four carries, while Jayden Johnson and Washington finished with 145 and 120 rushing yards, respectively.

Sophomore signal caller Reece Tanner was 2-of-3 passing for 20 yards and one interception, but added 18 yards and two scores on three rushing attempts.

“I think the offense did some good things tonight,” Abrams said. “This was one of the best games our offensive line has played. They did a great job controlling the line of scrimmage and getting downfield and blocking, and then our skill position guys made the plays.”

Though the final score might make one think differently, the Bulldogs were facing one of the best offenses in Classification 4A.

“We knew that North Oconee had a lot of success scoring on people this year. You look at what they’ve done, they’ve scored 30 or 40 points in a lot of their games,” Abrams said. “To come out and shut them out, that’s exactly what we wanted to do.”

With the victory, Cedartown (8-2) advances to the state quarterfinals for the first time since 2002. Furthermore, it is the first time the Bulldogs have made it to the third-round in Class 4A.

“We’re going to keep doing the same things we’ve been doing as a team because it’s gotten us to this point,” Abrams said.

The first-year head coach also urged everyone in the community who can attend Friday’s quarterfinal matchup to come out.

“Our guys have put in the work and made it this far. We’re playing a really good team, and we need every advantage we can get with them coming to Cedartown.”