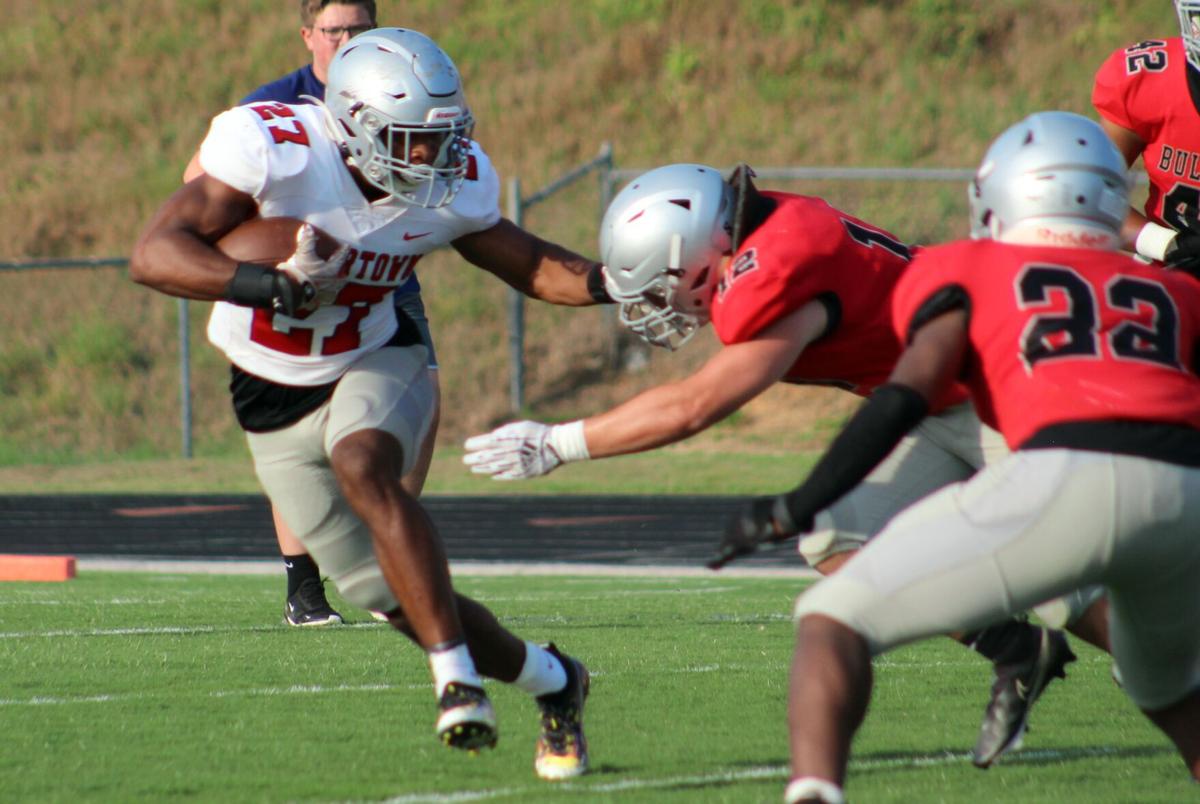 Cedartown’s CJ Washington (left) tries to push off of Eli Barrow (12) during the Bulldogs’ spring scrimmage on Friday, May 21, at Cedartown Memorial Stadium. Washington and Barrow are part of a group of returning starters for Cedartown this coming season. 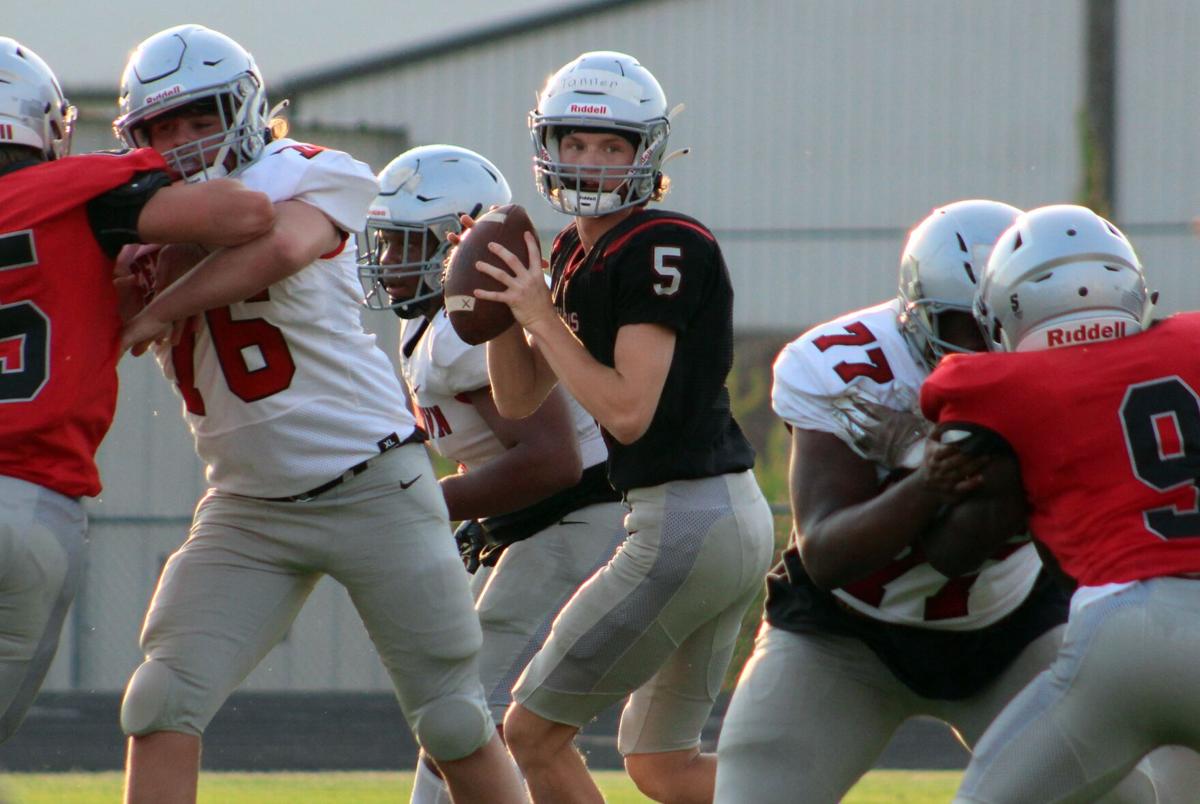 Cedartown quarterback Reese Tanner (5) looks for an open recevier during Friday’s Bulldog Brawl at Cedartown Memorial Stadium. The upcoming junior is poised to start his second season behind center. 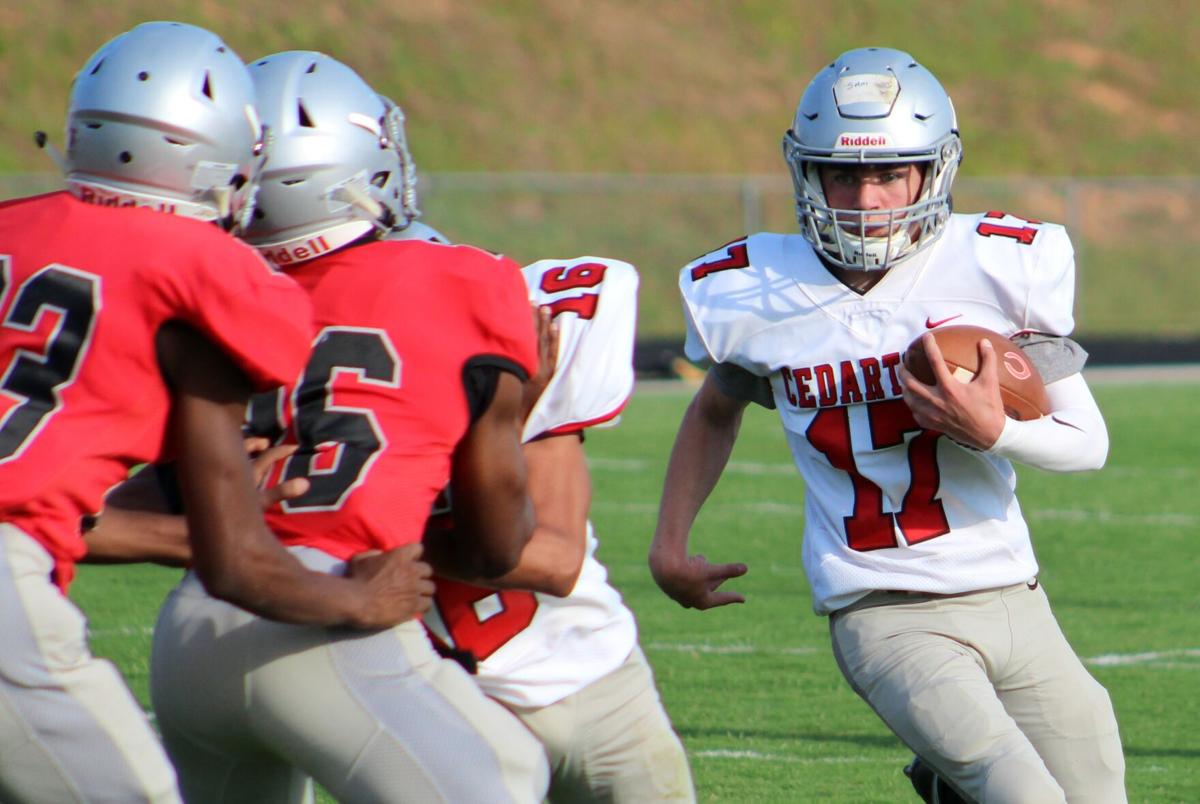 Cedartown’s Sam Smith, a rising freshman, runs to the outside for a gain during Friday’s Bulldog Brawl spring scrimmage at Cedartown High School.

Cedartown’s CJ Washington (left) tries to push off of Eli Barrow (12) during the Bulldogs’ spring scrimmage on Friday, May 21, at Cedartown Memorial Stadium. Washington and Barrow are part of a group of returning starters for Cedartown this coming season.

Cedartown quarterback Reese Tanner (5) looks for an open recevier during Friday’s Bulldog Brawl at Cedartown Memorial Stadium. The upcoming junior is poised to start his second season behind center.

Cedartown’s Sam Smith, a rising freshman, runs to the outside for a gain during Friday’s Bulldog Brawl spring scrimmage at Cedartown High School.

Passersby on East Avenue have had a sense of familiarity in the last several weeks.

As they approached the turnoff to Frank Lott Drive, they heard the sounds of whistles and pads clashing together. They saw up-downs, sprints, and Oklahoma Drills.

The boys in Red and Black are back, as signaled by Friday night’s “Bulldog Brawl” intra-squad scrimmage at Cedartown High School.

The Bulldogs’ first spring football game in a number of years drew a solid crowd over the weekend. Cedartown fans packed the stands at Cedartown Memorial Stadium and enjoyed a competitive contest that saw the White Team take down the Red Team 23-14.

Virtually every player on the roster received playing time and, more importantly for the coaching staff, nobody appeared to sustain any injuries. To hear it from head coach Jamie Abrams, just having a chance to hit the field was priceless.

“It felt very good to get out there with the team,” Abrams said. “Spring is all about helping them understand who we are as a team and what our mindset should be. We want to be physical and tough, therefore we designed practices to find out who the physical and tough players are. Some have done an excellent job and some have some work to do. Fortunately, we still have some time to work on it.”

Cedartown football will look to build upon the massive strides they made in 2020. The Bulldogs are coming off the first year of the Abrams era in which they took home the Region 7-4A title, advanced to the state quarterfinals, and finished with an 8-3 overall record.

The impressive part within all that is the fact that Cedartown achieved those successes without a true offseason after the 2019 season. Due to COVID restrictions, the Bulldogs did not have a full practice until late in the summer.

The lack of practice and live-action led to back-to-back losses to Rockmart and Calhoun before the Bulldogs went on an eight-game winning streak from late-September until their Elite 8 loss to Bainbridge.

This time around, Cedartown is going to take advantage of having a full offseason.

“It should allow us to concentrate on fundamentals a little more,” Abrams said. “We had to put everything in on the run last year, so a full summer will allow us to focus and concentrate on areas that may have been a little neglected with the nature of practices last summer.”

Looking ahead to the new season, one thing to note is that Cedartown is no longer the underdog in their region or in Class 4A. After making waves in 2020, all of Georgia has their eyes on Polk County to see what the Bulldogs can accomplish in Abrams’ second year.

However, with returning starters like quarterback Reece Tanner, running back Harlem Diamond, and fullback Patrick Gardner that know the system along with defensive thumpers like linemen CJ Washington and Jai Barnes and linebacker Eli Barrow, Cedartown appears to be built for another solid campaign.

As spring practices came to a close, the second-year head coach said he feels the process has been progressing as he has hoped.

“Spring practices have been productive this year,” Abrams said. “Spring is about finding guys you can depend on in the fall and finding weaknesses so we can work on them in the summer, and we’ve been able to do that.”

Just like in 2020, the 2021 schedule will include a non-region gauntlet that should have Cedartown battle-tested by the time region play rolls around. The Bulldogs open the season with a scrimmage at Cass on Aug. 13 before they travel to Denmark High School in Marietta for the season opener on Aug. 20.

Cedartown’s home opener will come on Aug. 27 as they host cross-county rival Rockmart. Following a Sept. 3 trip to Calhoun, the Bulldogs host New Manchester on Sept. 10 before traveling to Heard County one week later.

Following a bye, Cedartown will head to Pickens on Oct. 1 for their region opener. They will host Northwest Whitfield on Oct. 8 and Ridgeland on Oct. 15 before having another bye week.

The season will conclude with a trip to Central-Carroll on Oct. 29 and Senior Night at Doc Ayers Field against Heritage-Catoosa on Nov. 5.

Cade Cunningham holds plenty of promise, but Pistons are ‘going to be diligent’

Medal dream: D'Amour wants to do more than compete in Tokyo