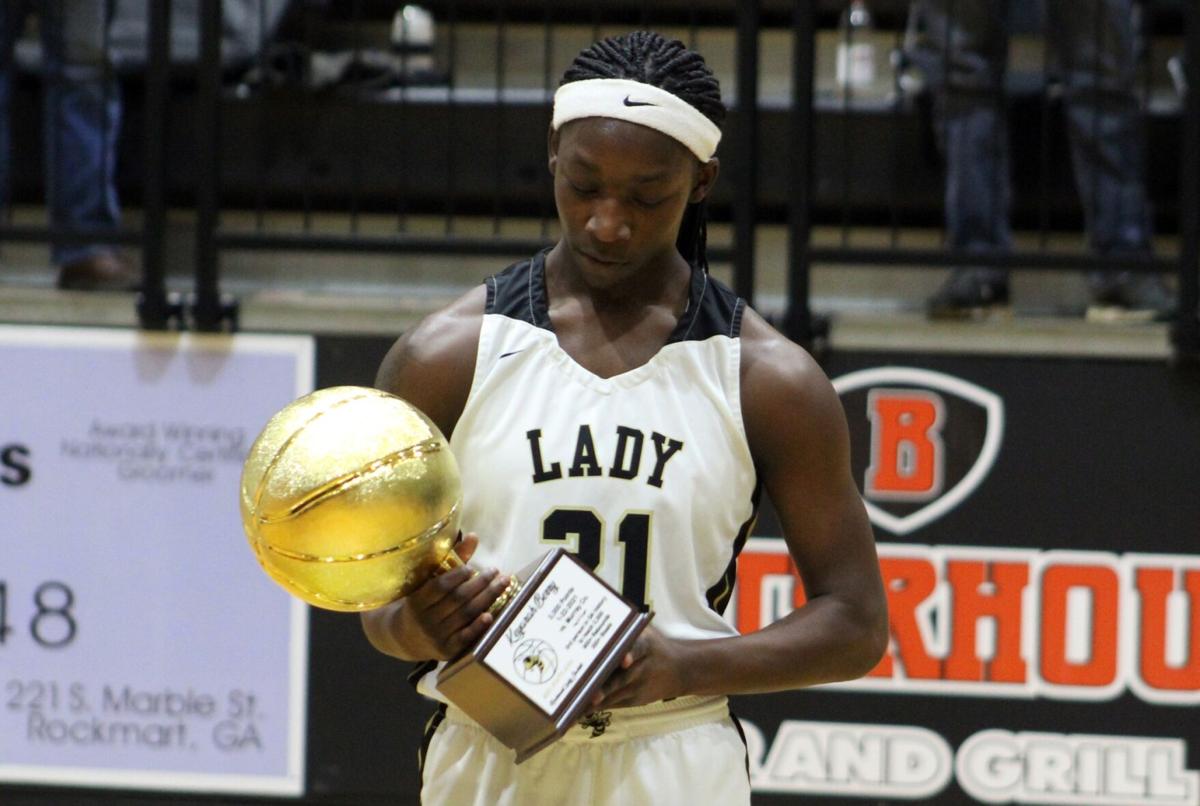 Rockmart’s Keyarah Berry looks at the trophy given to her after scoring her 3,000th career point during Friday’s game against Murray County at Rockmart high School. 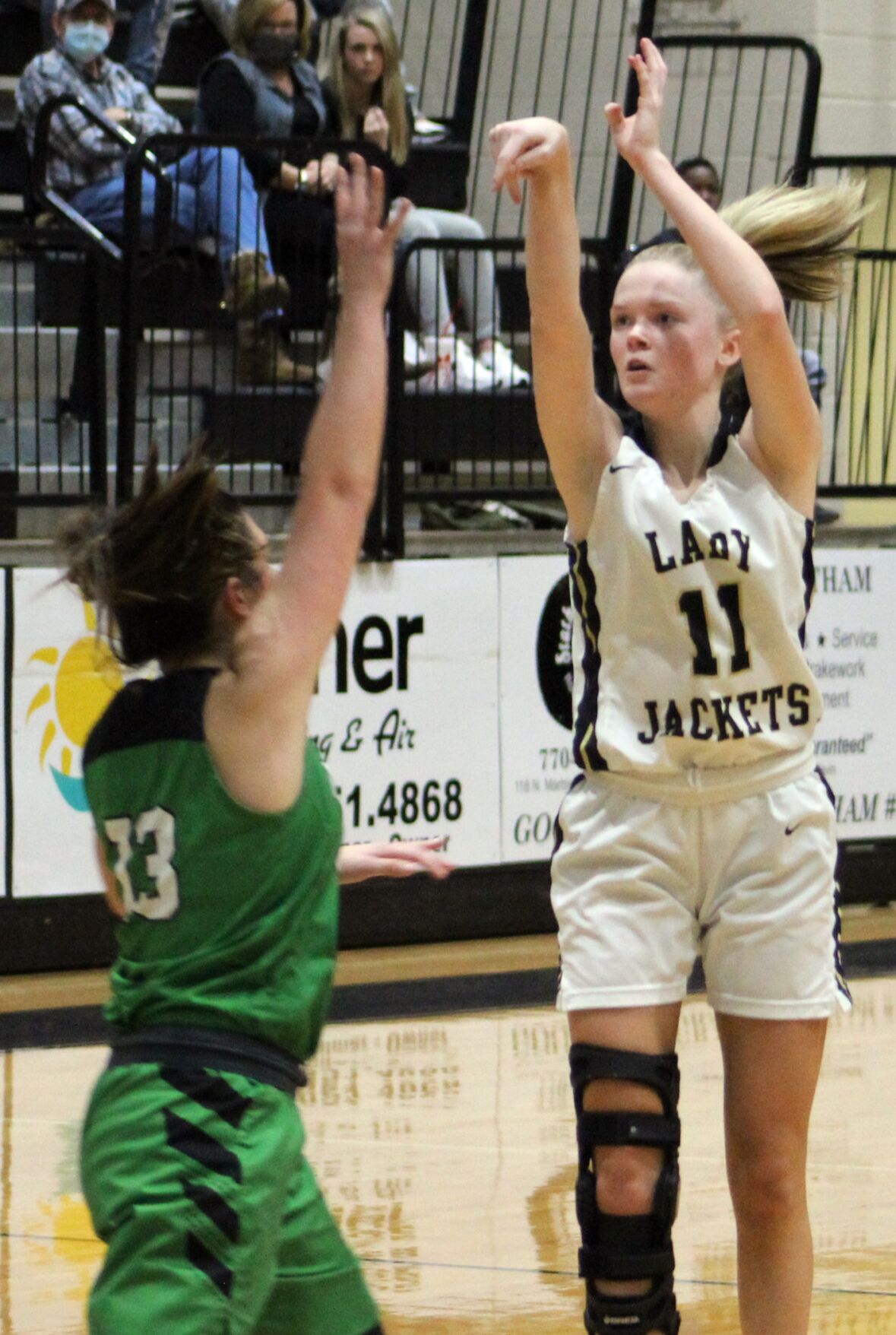 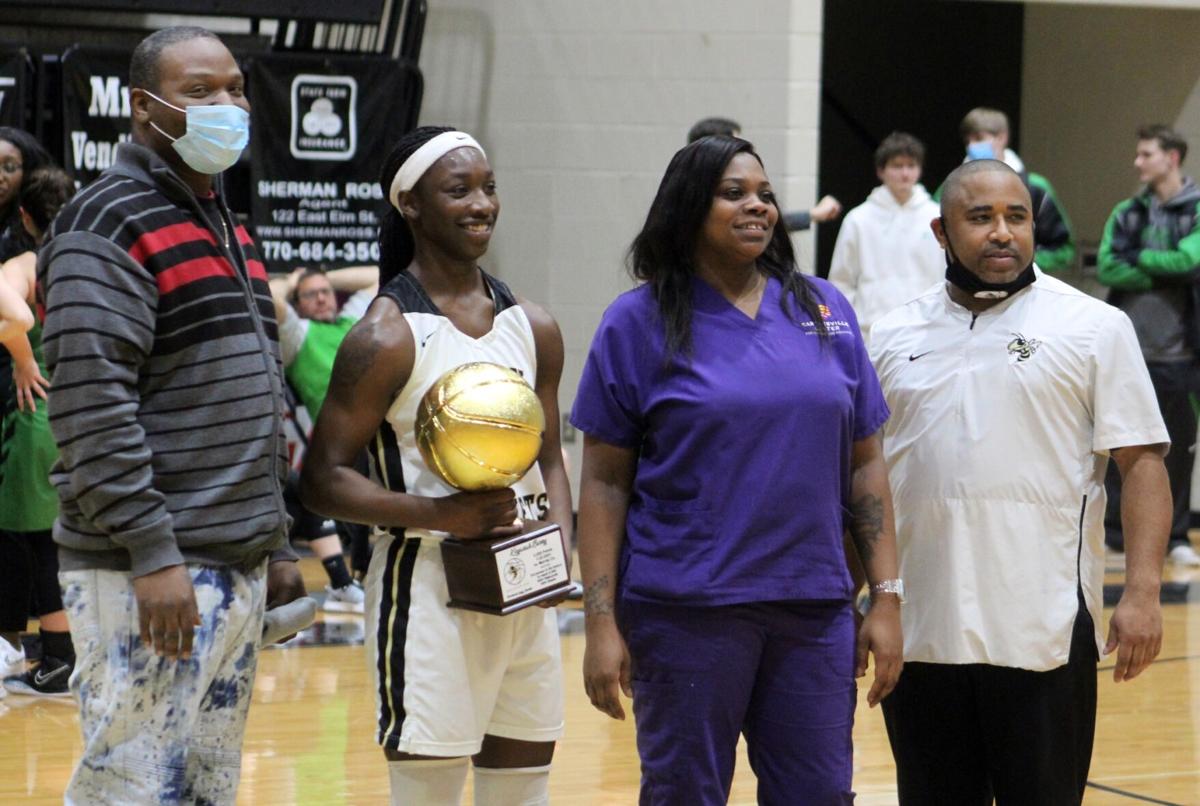 Rockmart’s Keyarah Berry looks at the trophy given to her after scoring her 3,000th career point during Friday’s game against Murray County at Rockmart high School.

Keyarah Berry has set herself apart from the competition on the basketball court plenty of times during her career at Rockmart High School.

On Friday night, she was recognized for joining a very exclusive club.

With a driving layup with 2:49 left in the second quarter of the Lady Jackets’ Region 6-3A contest against Murray County, Berry became just the third girl in Georgia high school basketball history to reach 3,000 points.

The moment was recognized with a short ceremony as the game was stopped a few seconds after the basket and the senior was presented with a trophy in the style of a golden basketball and a base marking the points scored as well as her more than 900 rebounds and 350 steals.

Berry said she was surprised with the trophy, expecting the more traditional basketball with the point total printed on it.

Rockmart girls’ coach Andre Clark said it was something special to mark something that doesn’t happen every day.

“It’s amazing. It’s great to have her on our team. She’s really going to be missed when she leaves.”

Berry, who signed with Indiana just before the start of the season, has already topped several all-time lists at Rockmart. She finished Friday’s 58-53 win over the Lady Indians with 32 points, and then scored 28 in a non-region road win over Towns County on Saturday.

She was second among all-time Georgia girls basketball scoring with 3,048 when Rockmart traveled to Lakeview-Ft. Oglethorpe on Tuesday.

Friday’s game proved to be a tough one for Berry and the Lady Jackets to get through as Murray County took advantage of several Rockmart mistakes to stay close in the final minutes.

Murray County fought back and Berry fouled out with 3:11 left to play, leading to the Lady Indians to take a 53-52 lead with 2:20 remaining.

But Rockmart rallied on defense and senior Megan Little took control of the offense to help the Lady Jackets avoid an upset at home.

Little finished with 17 points in the game.