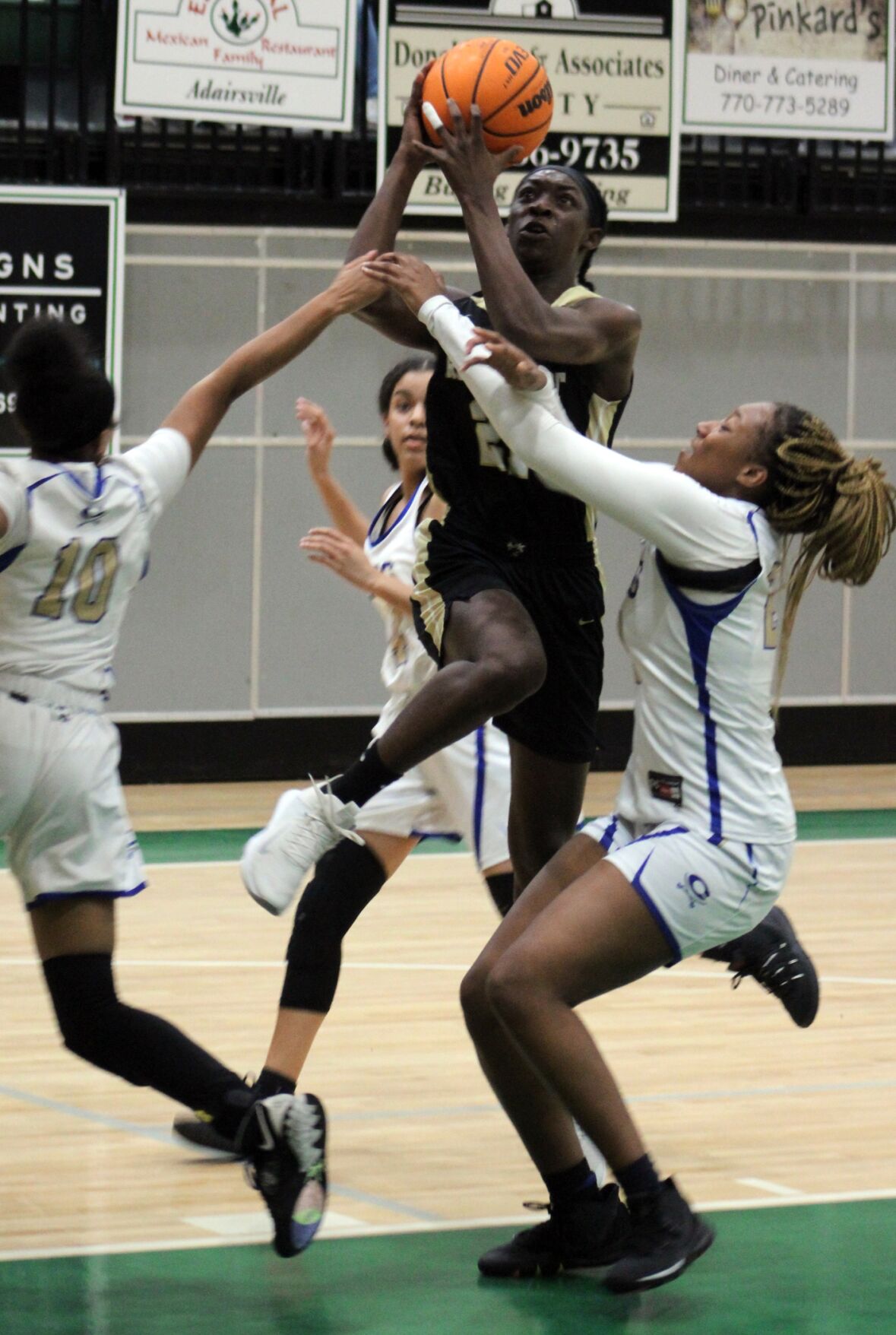 Rockmart’s Keyarah Berry goes up for a shot against a pair of Cass players during the championship game of the Adairsville Ace Christmas Clash on Thursday, Dec. 31, at Adairsville High School. 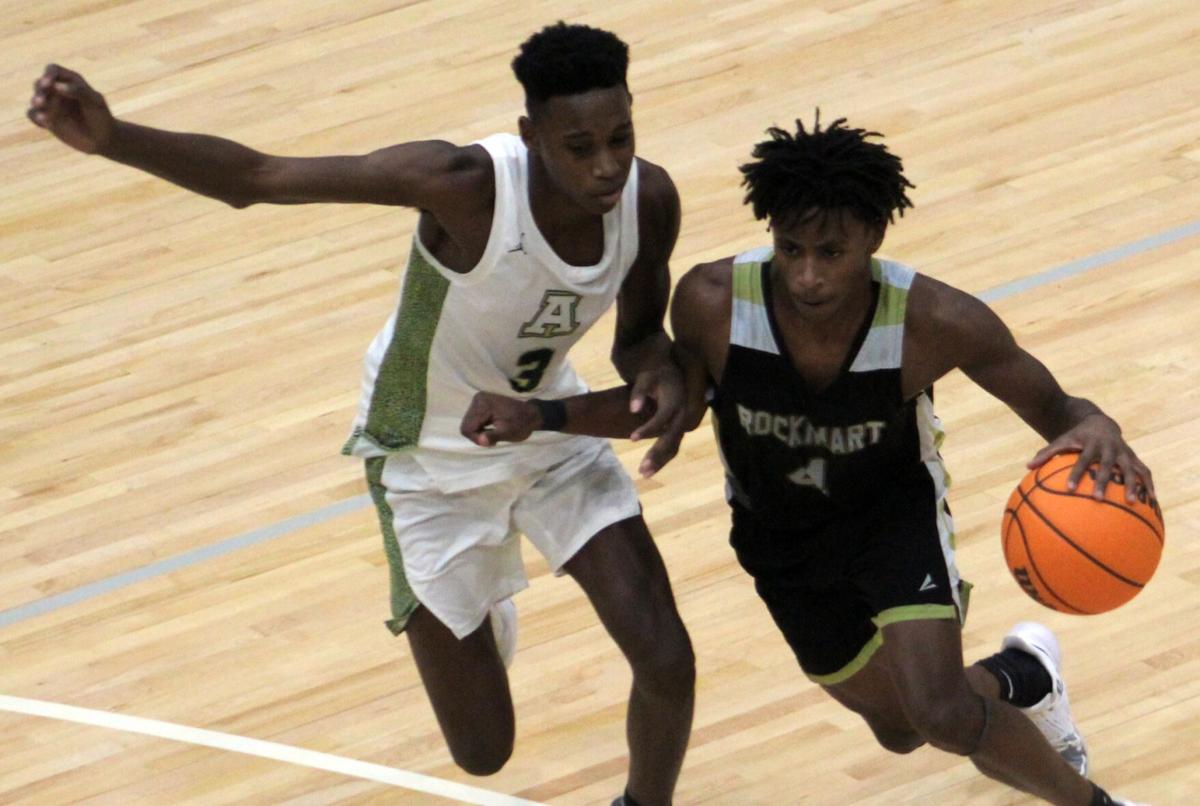 Rockmart’s Jakari Clark (right) drives to the inside against an Adairsville player during the third-place game of the Adairsville Ace Christmas Clash on Thursday, Dec. 31, at Adairsville High School.

Rockmart’s Keyarah Berry goes up for a shot against a pair of Cass players during the championship game of the Adairsville Ace Christmas Clash on Thursday, Dec. 31, at Adairsville High School.

Rockmart’s Jakari Clark (right) drives to the inside against an Adairsville player during the third-place game of the Adairsville Ace Christmas Clash on Thursday, Dec. 31, at Adairsville High School.

The Christmas break gave the Rockmart High School basketball teams some workouts on the court as they took part in the Adairsville Ace Christmas Bash.

Playing Dec. 29-31, the Jackets and Lady Jackets took on competition at Adairsville High School. Rockmart’s girls advanced to the championship game before falling to undefeated Cass 76-53, while the boys started with a win but fell in their final two games to finish fourth.

For the Lady Jackets, wins over Cartersville (69-56) and Armuchee (57-49) paved the way for a showdown with 5A Cass in the tournament’s girls’ title tilt.

Rockmart battled early on and kept Cass in check through the first period until a scoring drought in the second quarter pushed the Lady Colonels out to a 39-20 lead at halftime that was hard to overcome.

“Right there in the first quarter, I thought that’s the best we’ve played all year,” Rockmart girls’ coach Andre Clark said. “It again kind of went away from us in the second quarter.”

Senior guard Keyarah Berry continued her dominance with a 35-point performance against Cass. The Indiana signee was named to the all-tournament team after posting 40 points against Armuchee and a double-double against Cartersville with 31 points and 10 rebounds.

Also making all-tourney was Rockmart’s Megan Little, who had 19 points and six 3-pointers against the Lady Canes, and Zori Williams, one of the young guns of the team who continues to find her footing as the season continues.

“There is some stuff we’ve got to work on, you know, but again I thought we played well. We’re learning how to handle when teams faceguard Megan and double-team Keyarah. Other girls have got to make shots. And I thought tonight we made good passes and took good shots,” Clark said.

The holiday break concluded for the Lady Jackets (8-4, 5-2 6-3A) with a 67-60 win over Christ Church Episcopal out of South Carolina in the She Got Game Classic in Atlanta on Jan. 2.

Berry was named the game MVP with 39 points, followed by Little’s 12 points. Analee Morris and Williams each had six.

Rockmart got back to Region 6-3A action last Tuesday, Jan. 5, hosting North Murray. The girls took a 48-37 win over the Lady Mountaineers with Berry leading all scorers with 28 points and eight rebounds.

For the Rockmart boys, they started the Adairsville tournament with a 61-39 win over Mount Paran Christian. Sherman Davis and Javin Whatley led the team in scoring with 15 and 12 points, respectively.

Rockmart played from behind for most of the game and got within one of Adairsville with 1:25 left to play, but defensive miscues led to a 56-50 loss. Davis and Whatley were both named to the all-tournament team.

The Jackets suffered two region losses last week as they fell to Sonoraville on the road Jan. 4, 56-42, before dropping a home game to North Murray the following evening, 52-47.

Rockmart will host Sonoraville on Tuesday, Jan. 12, and then host 6-3A foe LaFayette on Friday.