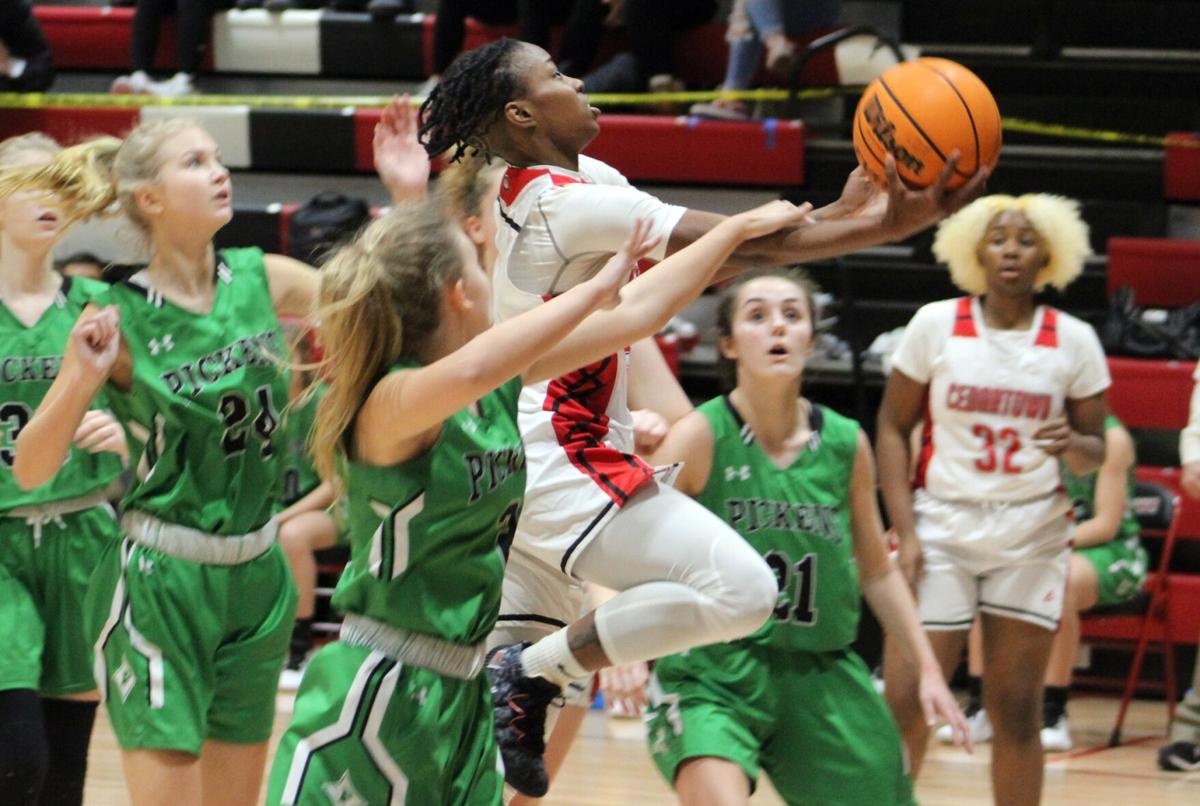 Cedartown’s KeKe Turner rises up from the middle of a group of Pickens players to make a layup during last Friday’s game against the Region 7-4A squad at Cedartown High School. 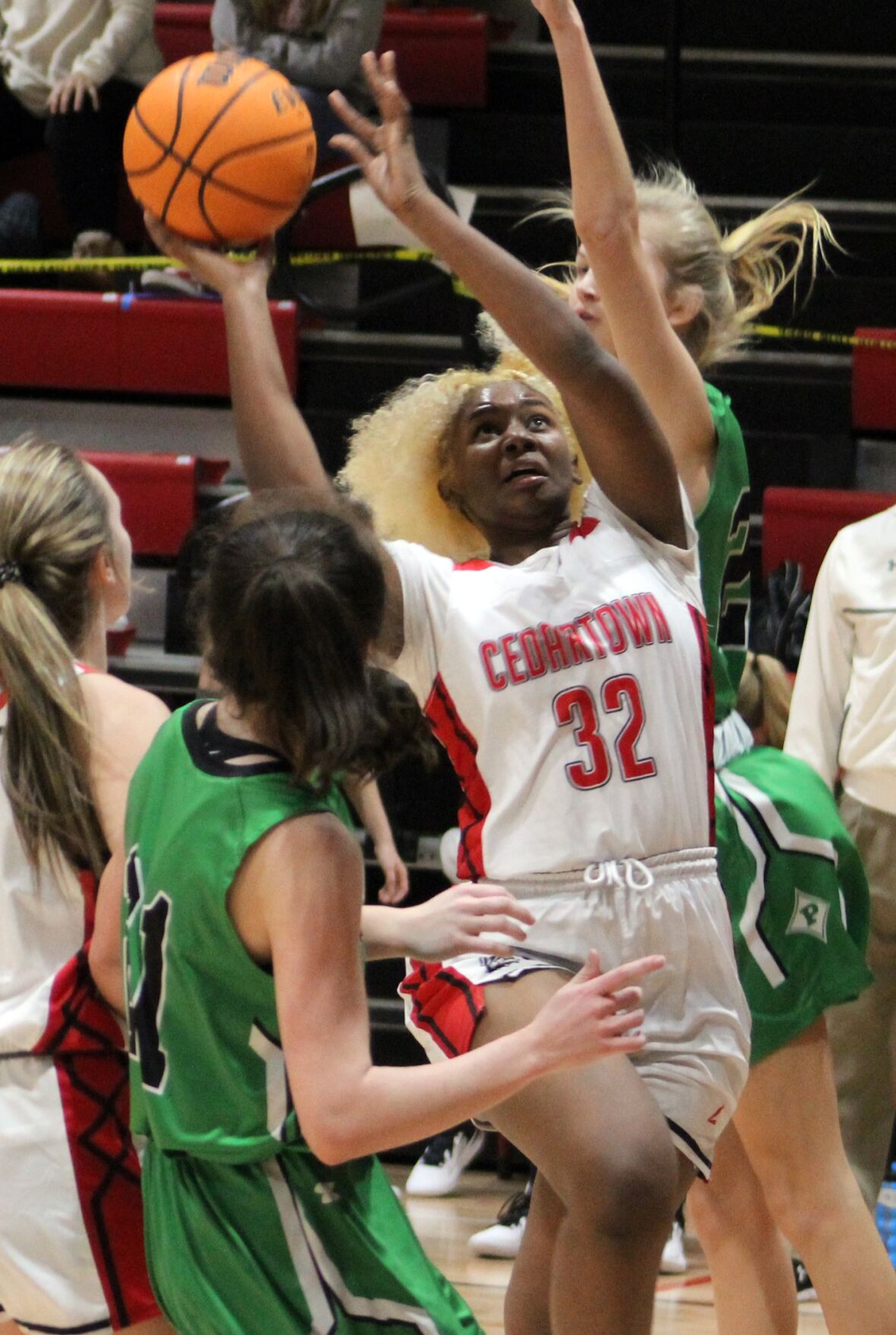 Cedartown’s KeKe Turner rises up from the middle of a group of Pickens players to make a layup during last Friday’s game against the Region 7-4A squad at Cedartown High School.

How do you follow up winning the 45th Annual Hilburn-Patterson Haralson County Invitational? Well, if you are the Cedartown Lady Bulldogs, you garner two huge wins before running into some stiff competition.

Cedartown’s girls basketball squad returned to action on Jan. 2 at home, hosting one-win Paulding County. As expected, the Lady Bulldogs built a 30-plus point lead in the first three periods before delegating the final quarter to reserve players.

In the end, Cedartown reigned victorious, 49-29, against the Lady Patriots. Keke Turner and Qiana Watson led the team in scoring with 18 and 14 points respectively.

A road trip to Rossville on Jan. 5 resulted in similar success for the Lady Bulldogs. In their first matchup with new region opponent Ridgeland, first-year head coach Levi Wigley had Cedartown’s girls ready to go from the opening tip.

Their efforts never slowed down, pulling away early and continuing to pour it on late in their 79-28 win. Watson finished with 19 points, Makayla Jordan scored 15, and Zoe Diamond-Pasley had 13 points in the game. Turner, who recently received an offer from Massasoit Community College in Brockton, Massachusetts, added 11 points against the Lady Panthers.

After becoming ranked in the Top 15 of the MaxPreps Class 4A Girls Basketball State Rankings, Cedartown understood they would have a massive target on their back for the rest of region play.

As fate would have it, though, their next game would come against a higher-ranked team. The Pickens Dragonettes, the state’s No. 10-ranked squad, visited Cedartown High School on Friday night. Despite a great effort by the Lady Bulldogs they could not overcome a late deficit against the depth-filled Dragonettes, falling 55-50 at home. Watson and Turner had standout performances again, scoring 18 points and 13 points.

“I can’t be more proud of my team right now. And I told him that in the locker room,” Wigley said after the Region 7-4A loss. “You know they did everything they had to do to give themselves a chance to win. And, you know, that’s all you can ask. And they did that tonight, and unfortunately we came up short.”

Cedartown pulled within three of the visitors with four minutes left in the game and then made it 45-44 after a pair of free throws by Turner. Pickens got back to a three-point lead in the final minute, with Watson knocking down a shot to make it 51-50, but that would be as close as the Lady Bulldogs would get.

“Tonight,” for four quarters, we were who I think we are, who I think we’re capable of being every night, and that’s a team that comes out, plays hard, does their job, is unselfish, outworks the person in front of you and wants to win,” Wigley said.

On Saturday night, Cedartown looked like a team that had played four games in seven days. The Lady Bulldogs suffered a surprising 43-38 defeat versus visiting Cartersville, a team that Cedartown beat by 20 points in early December.

The Lady Canes created just enough separation in the final period and held on for a five-point win that would serve as their third victory of the season. Turner and Watson scored nine points each and Kam Cochran added six points in the loss.

Sitting at 7-3 overall through ten games, Cedartown is ranked fourth in the region standings with a 2-2 record against Region 7-4A opponents. They will have an opportunity to improve their standing with wins this week.

Cedartown’s girls traveled to Heritage-Catoosa on Tuesday night to start another week packed with region games. They will host Southeast Whitfield on Friday night before taking on Central-Carroll at home on Saturday.