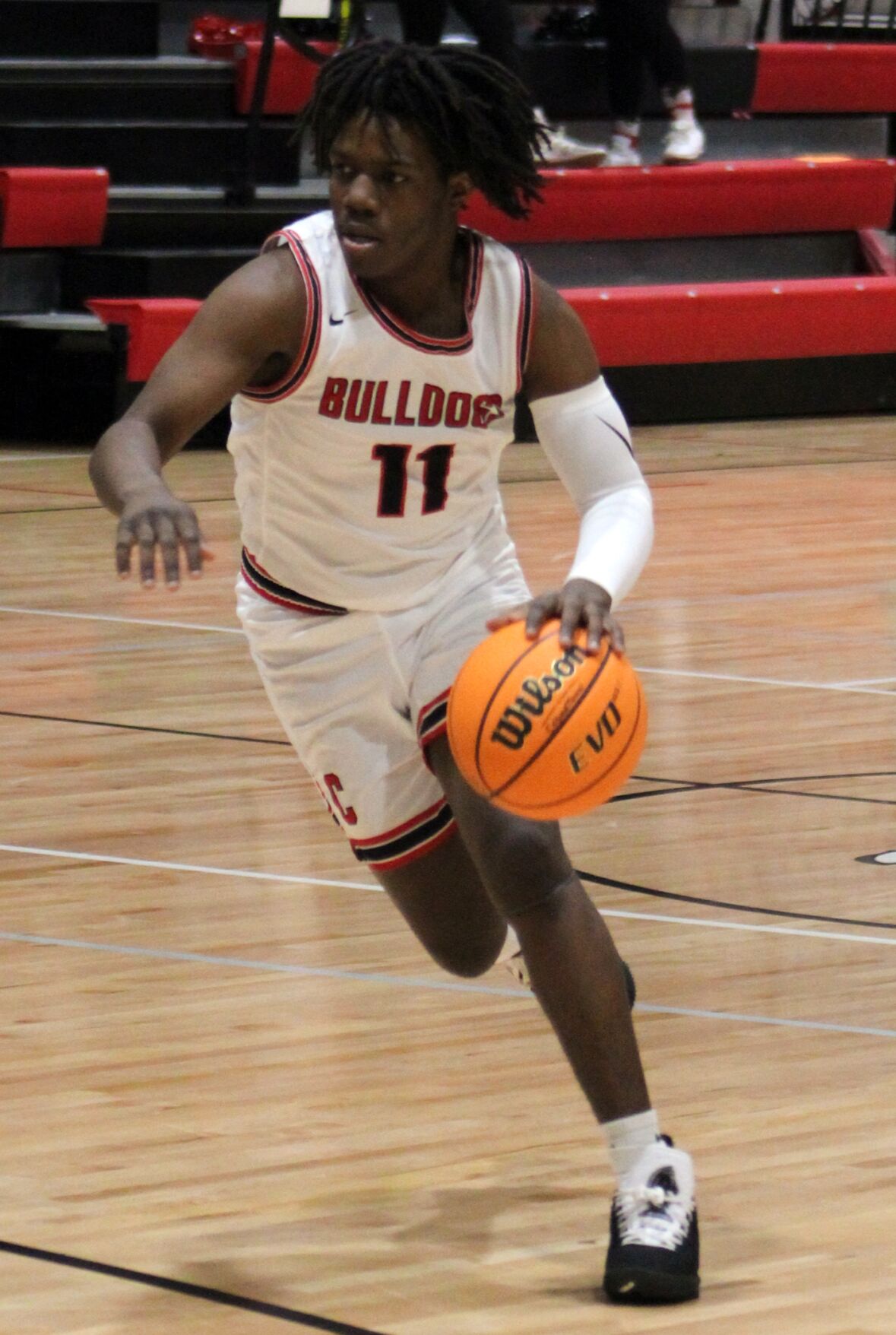 Cedartown’s MJ Holiday (11) drives to the outside against Northwest Whitfield during a Region 7-4A game Friday at Cedartown High School. 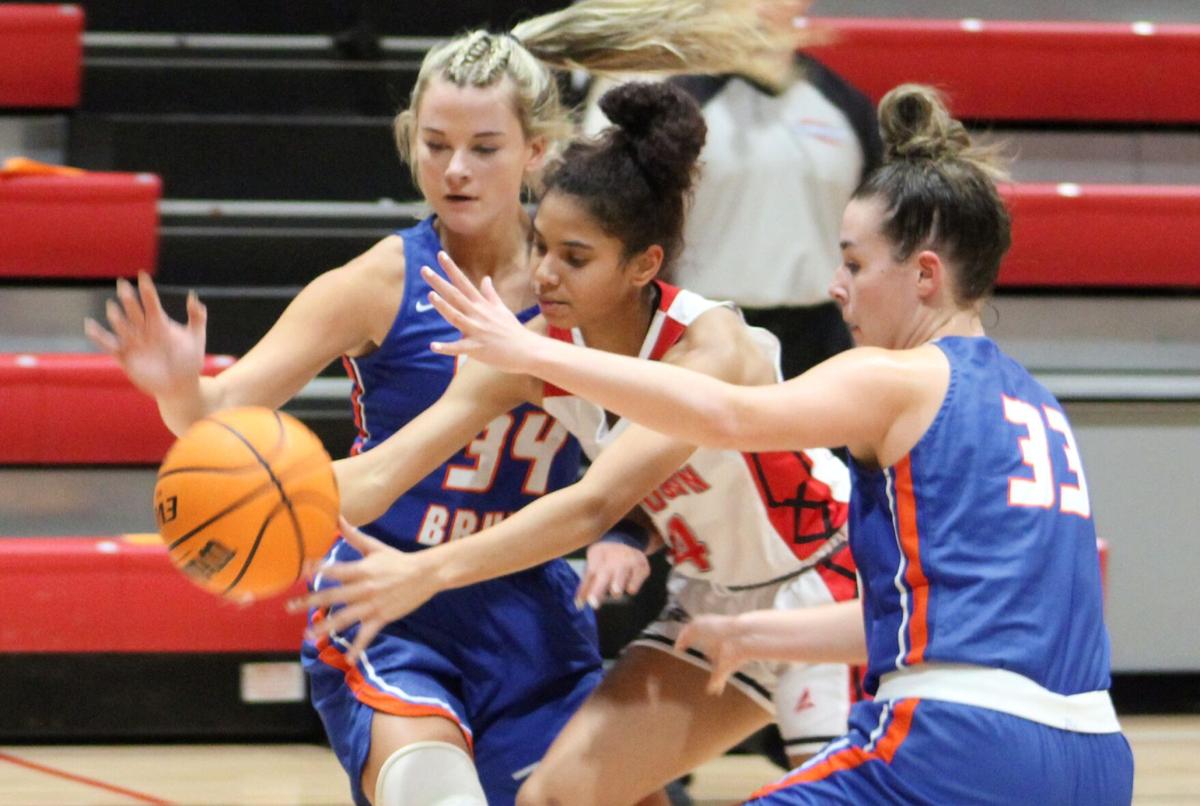 Cedartown’s Makayla Jordon (center) reaches for a loose ball while being hemmed up by Northwest Whitfield’s Autumn Wiley (34) and McKenzie Brueckner (33) during Friday’s game at Cedartown High School. 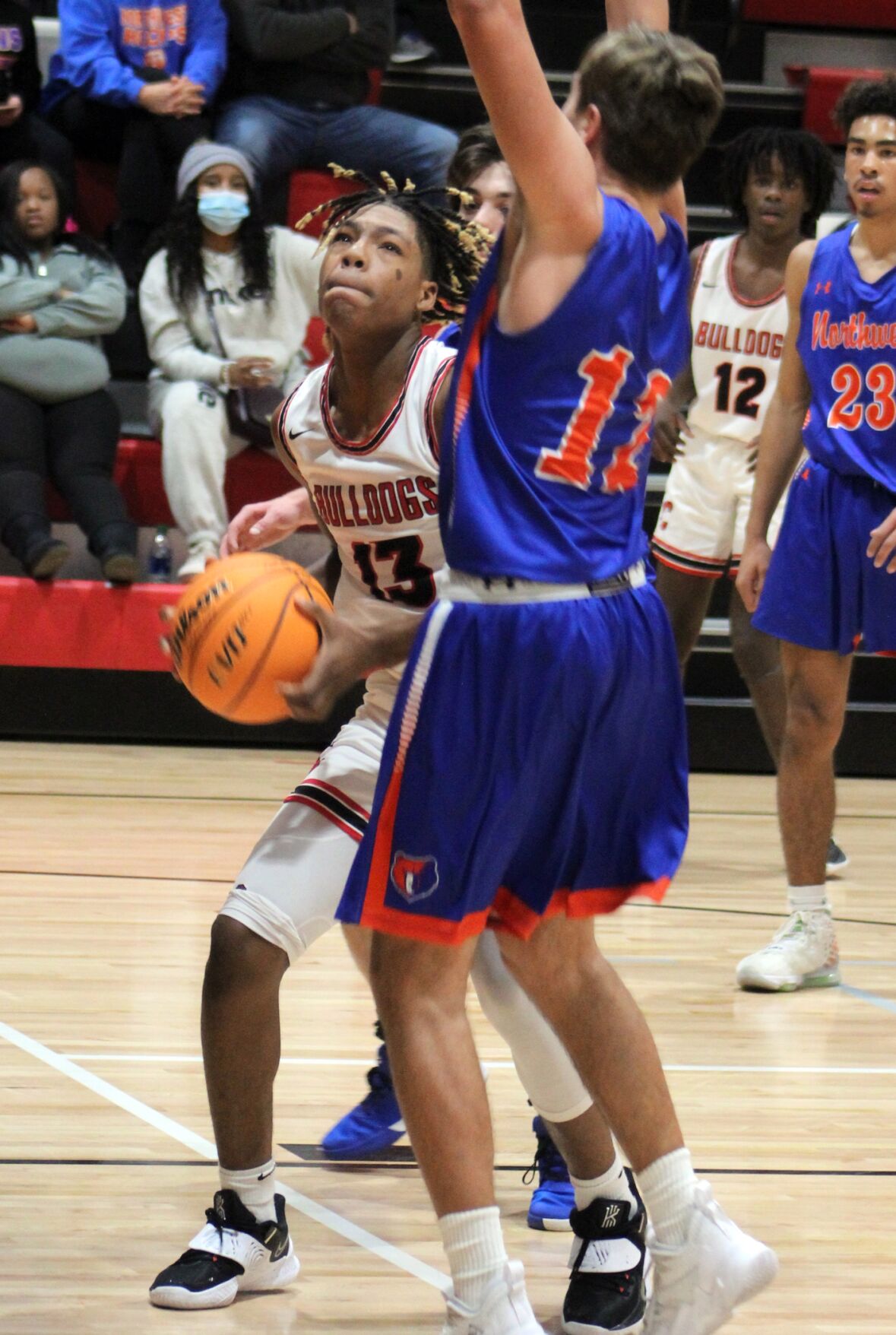 Cedartown’s MJ Holiday (11) drives to the outside against Northwest Whitfield during a Region 7-4A game Friday at Cedartown High School.

Cedartown’s Makayla Jordon (center) reaches for a loose ball while being hemmed up by Northwest Whitfield’s Autumn Wiley (34) and McKenzie Brueckner (33) during Friday’s game at Cedartown High School.

Both Cedartown High School basketball teams had paths to victory on Friday night, but in the end they couldn’t keep their opponents down.

The Bulldogs, playing their first home game of the season on their new gym floor, lost a back-and-forth battle with Northwest Whitfield, 53-50, while the Lady Dawgs let a first period lead slip away in a 52-33 loss to the Lady Bruins.

Cedartown’s boys kept their game close with the Region 7-4A opponent, trailing 23-21 at the half and 43-39 after the third period.

The Bulldogs (1-3, 1-1 7-4A) had their biggest run of the night to start the final quarter — a 9-0 stretch that gave Cedartown it’s biggest lead, 48-43, with five minutes to play. Unfortunately, the home team’s advantage shrank as Northwest Whitfield put together a 10-2 run in the final five minutes of the game.

Cedartown boys coach Benjie Frazier said the outcome was tough to swallow, but he understands his players gave their best effort.

“It’s like I told them, I was proud of them because whenever we were down by 10 points we fought back. We got back in the game. But it just seemed like it would be when we got back in the game and we took the lead, we lost our focus. Like we became satisfied,” Frazier said. “But you know, my kids play hard and that’s all I ever ask.”

MJ Holiday led the Bulldogs with 18 points, which included four 3-pointers, while his brother, Xavier Holiday, added 10 points. Jeremiah Johnson was next with seven points.

Cedartown had two chances to tie the game in the final 30 seconds. Johnson missed a trey with 25 seconds left, and then Donald Knight got the ball to MJ Holiday outside the arc who shot it and missed at the buzzer.

The Lady Bulldogs (2-1, 1-1) were only down 24-19 at halftime of their game with Northwest Whitfield, but an unfortunate run where everything seemed to go in for the Lady Bruins and nothing went in for the home team led to a 22-0 run for the visitors and put the game well out of hand.

“We came out like we wanted to but just kind of ran out of steam there at the end of the first half and let them get a little run on us. That was kind of tough going into the locker room down by five. Mentally, I think that kind of took a toll on us,” Cedartown girls’ coach Levi Wigley said.

It was the first loss of the season for the Lady Dawgs, who have responded quickly to the change in coach after Eddie Gambrell stepped down just before the start of the season.

Senior guard Keke Turner picked up her second foul early in the second period and sat out the rest of the half. She led Cedartown with 11 points, all of which were scored in the opening quarter.

Qiana Watson was next for the Lady Dawgs with seven points.

Both Cedartown teams are playing in the 45th Annual Haralson County Invitational this week. Games started Monday, Dec. 28, with the Cedartown girls taking on East Paulding at noon and the Cedartown boys playing Sonoraville at 1:30 p.m.

Both teams will play on Day 2 of the tournament with opponents and game times to be determined.