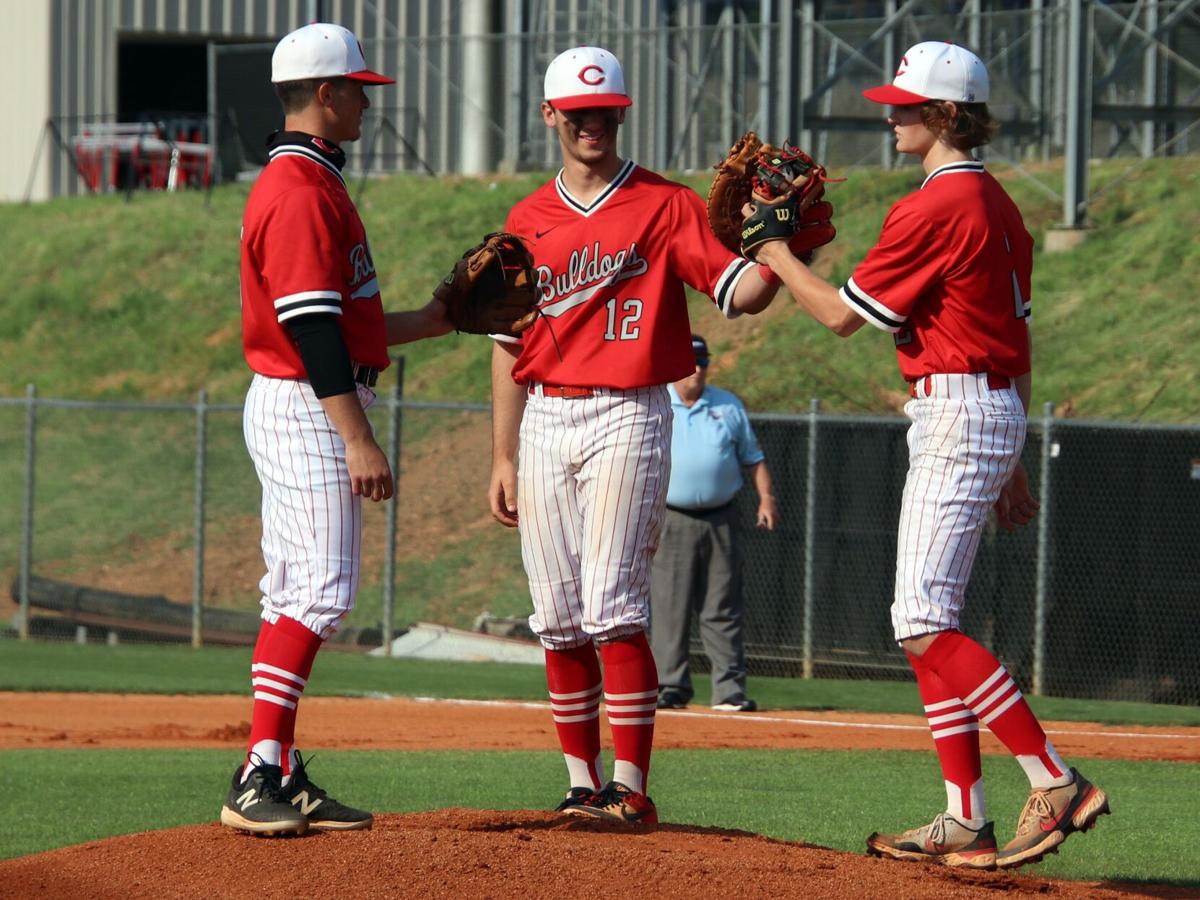 Cedartown’s Corben Cuzzort (from left), Zane Barrow and Reece Tanner meet on the mound before the Bulldogs’ first game against Heritage-Catoosa on Tuesday, April 20, at Cedartown High School. Cedartown will host the first round of the state playoffs starting with a doubleheader on Wednesday with Game 3 on Thursday if needed. 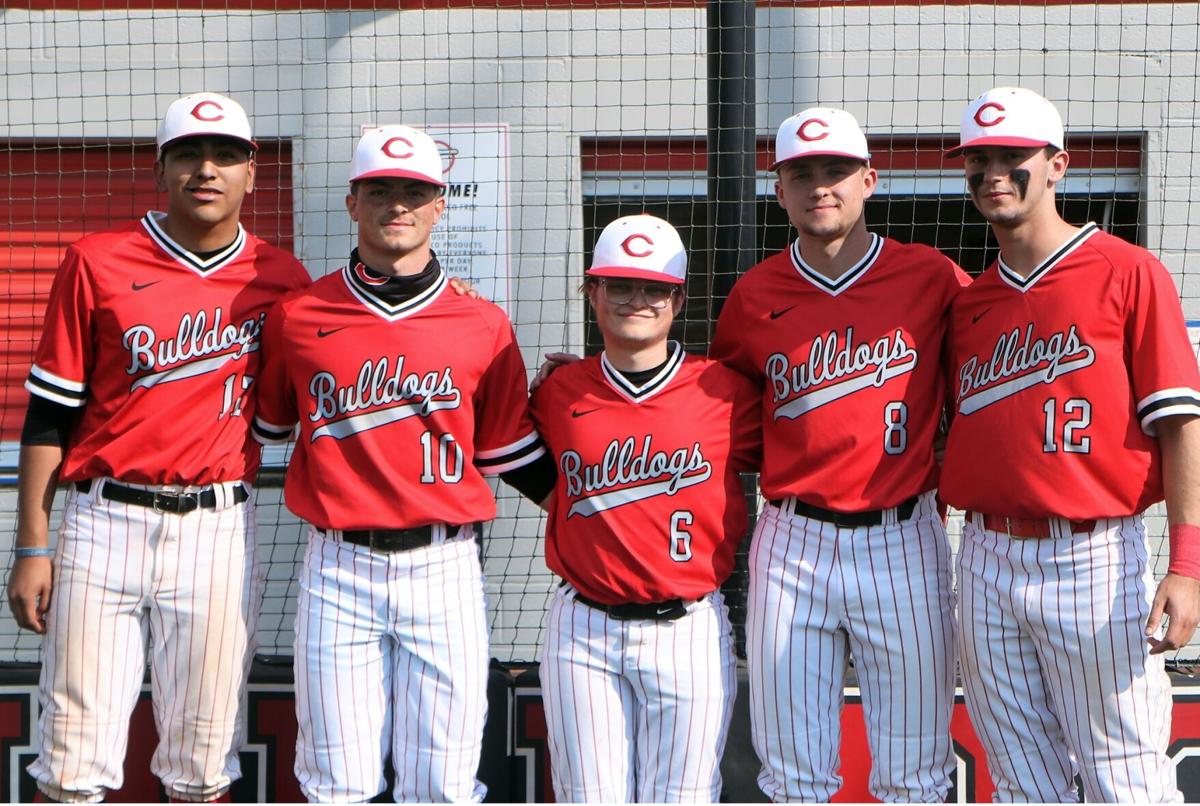 Cedartown’s Corben Cuzzort (from left), Zane Barrow and Reece Tanner meet on the mound before the Bulldogs’ first game against Heritage-Catoosa on Tuesday, April 20, at Cedartown High School. Cedartown will host the first round of the state playoffs starting with a doubleheader on Wednesday with Game 3 on Thursday if needed.

For the first time since 2016, the Bulldogs are region champions.

Cedartown baseball defeated Heritage-Catoosa in two out of three games last week to secure the Region 7-4A title and advance to the GHSA state playoffs as a one-seed.

Cedartown won last week’s lone contest at the Dawg Pound 5-1 on Tuesday. Several seniors stood out on Senior Night at Cedartown High School, including Cade Dingler, who finished 2-for-3 with three runs batted in. He drove in the game’s first run on a single in the bottom of the fourth, bringing home sophomore Dylan Cupp from third base.

Cedartown struck for four runs the following inning. Cupp batted in Cole Dingler to start the scoring, Jack Roper scored on a passed ball, then Cade Dingler produced a two-run double with two outs that drove in Cupp and Reece Tanner to make it 5-0. Heritage’s offense was held in check by starter Tanner, who struck out four batters and gave up just one walk and three hits in four innings.

Cupp came in to relieve the fellow second-year Bulldog and struck out three, allowing one run on one walk and three hits in three innings.

Cupp was 1-for-3 with two runs and one RBI while Cole Dingler was 1-for-2 with a run scored. Tanner and Roper each scored once, and Denver Nale, Eli Barrow, and Xavier Holiday all tallied one hit versus the Generals.

The Bulldogs made the long drive to Ringgold for a doubleheader on Friday night needing just one victory to clinch the region. Cedartown would waste no time doing so, knocking off the Generals in an instant classic to start off the evening.

Corben Cuzzort and Cupp combined for a no-hitter in a 3-0 victory. Cuzzort struck out two and gave up just three walks in 6 2/3 innings. Cupp came in to record the game’s final out with runners at the corners. Cuzzort, an uncommitted senior, saved his best performance of the season for last by completely shutting down the No. 7 team in Class 4A and earning the first region title for head coach Gevin Johnson.

Cupp (2-for-3 with an RBI) and Tanner (2-for-4) led the Bulldogs on offense in Game 1 in Ringgold. Cade Dingler was 1-for-3 with a run scored and a run batted in, while Cole Dingler and Zane Barrow each finished 1-for-3 with a run. Xavier Holiday scored in the game, while his brother MJ Holiday was able to come back from injury and serve as a designated hitter in the victory.

Johnson elected to give reserves playing time in the final game at Heritage High School on Friday night. Upperclassmen Alex Cornejo and Trent Johnson earned a start in the final game of the regular season along with youngsters like Matt Henslee, Britt Baxter, and Jack Roper. Cedartown gave up five runs in the bottom of the first and ten in the bottom of the second inning, falling 15-0 in three innings.

Tony Ware (1-for-1) was the only Bulldog to get a hit while Henslee earned a walk. Starter and Shorter University commit Camden Jackson allowed five earned runs in the first inning, while Eli Barrow and Baxter gave up nine combined earned runs in the bottom of the second.

By taking the series over the Generals, the Bulldogs earned the region title and some recognition. Cedartown is the only team in Region 7-4A ranked in the Georgia Dugout Preview Top 10, debuting in the final regular season poll as the No. 9 squad in Class 4A.

Cedartown (19-9, 14-4) won its first baseball region title since 2016, the year the Bulldogs won Region 5-3A and advanced to the Final Four of the State Tournament.

Qualifying as a one-seed in the playoffs, CHS will host for at least the first two rounds of the state tournament if they advance.

The Bulldogs are set to host the No. 4 seed from Region 6-4A in the first-round series starting with a doubleheader Wednesday, April 18. Their opponent was yet to be determined as of press time, but it will be either Arabia Mountain or Mays. Arabia Mountain was scheduled to play its last region game on Monday.

A Game 3 for the first-round series will be played Thursday at Cedartown High School if necessary.