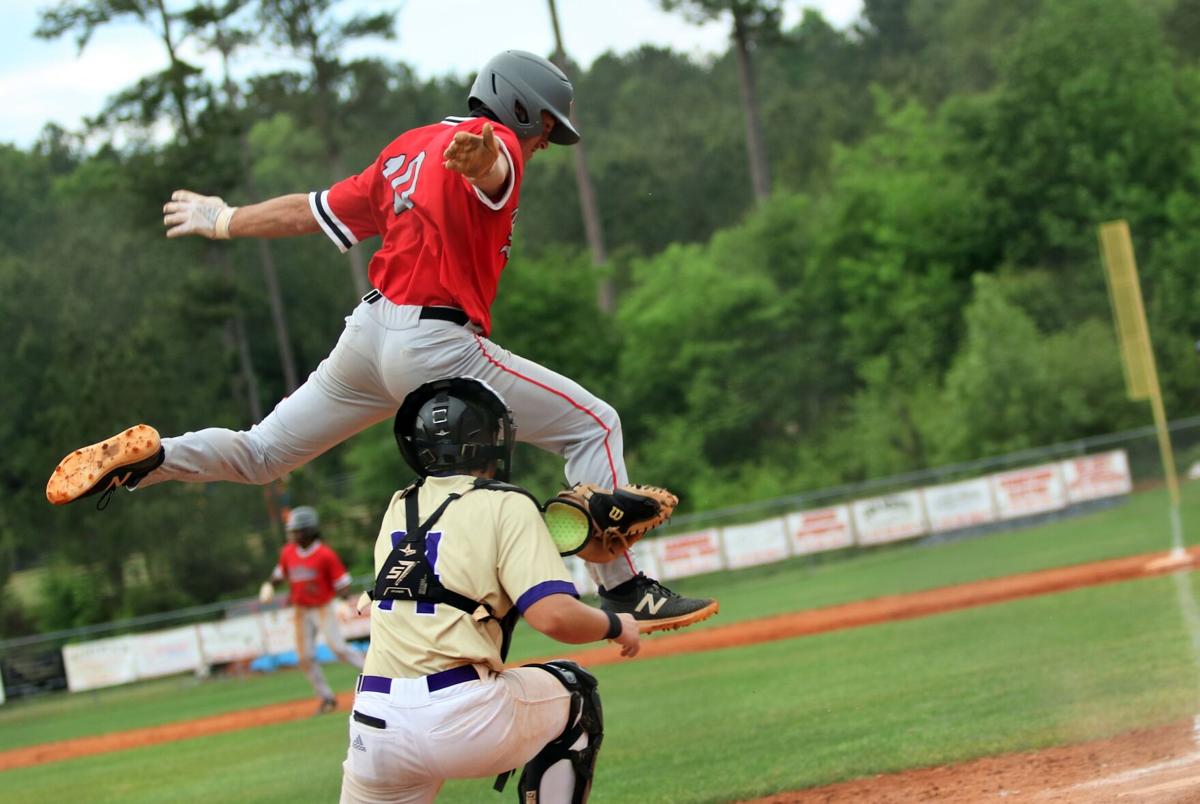 Cedartown’s Corben Cuzzort leaps to try to avoid the tag by the Bainbridge catcher at home plate during Game 2 of a doubleheader in the GHSA Class 4A Elite Eight at Cedartown High School on Tuesday, May 11. 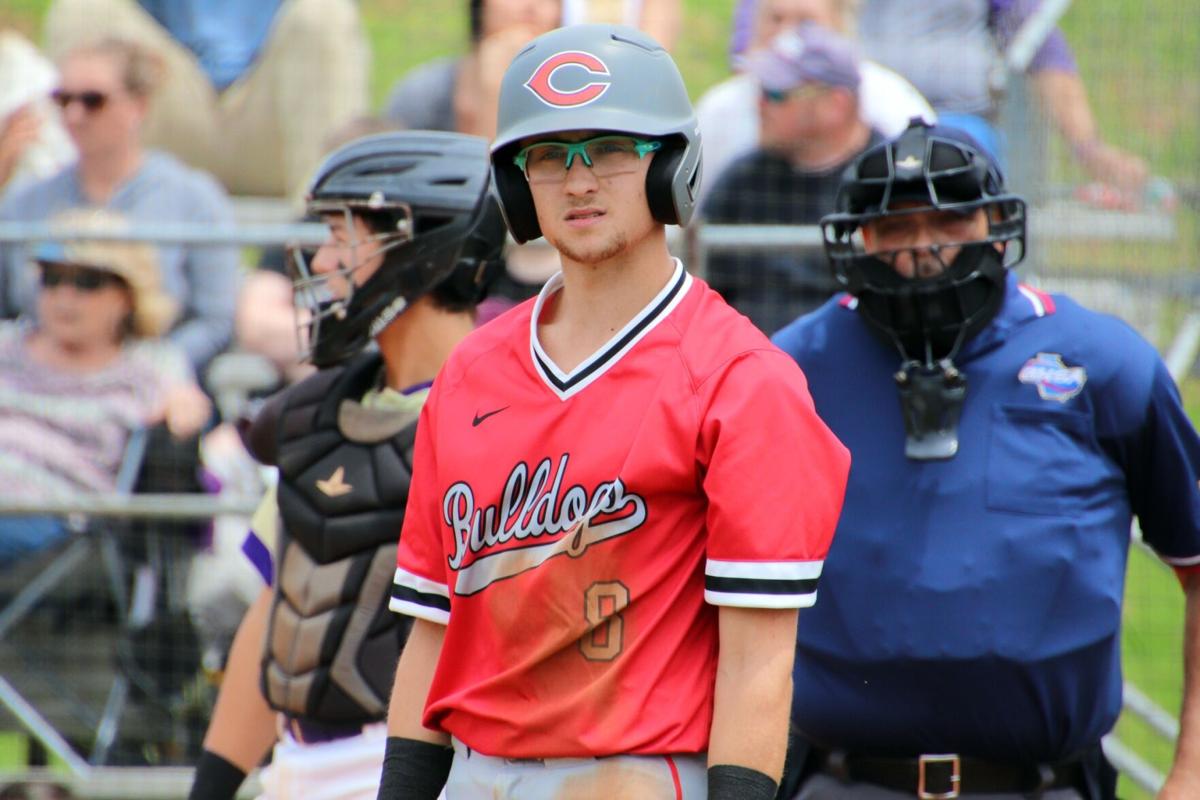 Cedartown’s Cade Dingler looks for instructions from the dugout during an at-bat in the Elite Eight series against Bainbridge last Tuesday at Cedartown High School.

Cedartown’s Corben Cuzzort leaps to try to avoid the tag by the Bainbridge catcher at home plate during Game 2 of a doubleheader in the GHSA Class 4A Elite Eight at Cedartown High School on Tuesday, May 11.

Cedartown’s Cade Dingler looks for instructions from the dugout during an at-bat in the Elite Eight series against Bainbridge last Tuesday at Cedartown High School.

After advancing to the Elite 8 following playoff victories over Mays and Flowery Branch, Cedartown baseball saw their season come to a close last week in the state quarterfinals as the Bulldogs were swept at home on May 11, losing 6-3 and 8-4 to visiting Bainbridge.

Coach Gevin Johnson’s squad had a solid chance to win the opening game against the Bearcats.

Unfortunately for the Bulldogs, their biggest mistakes came at the very end of Game 1. After generating two quick outs in the top of the seventh, a baserunner reached on an error. Two walks and two errors followed, plating three runs for Bainbridge who held on in the home-half of the seventh to win 6-3.

Corben Cuzzort and Reece Tanner picked up one hit each, and Cupp touched home plate once in the loss. Cuzzort allowed just two earned runs on six hits and six walks while striking out four in 6 2/3 innings. Dylan Cupp recorded the final out, a strikeout, to stop the bleeding in the top of the seventh.

Game 2 was similarly heartbreaking for the Bulldogs. Cedartown could not seem to catch a break against Bainbridge in an 8-4 defeat. The Bearcats raced out to a 2-0 lead in the second inning, but the Bulldogs came within one when a groundout from Cole Dingler scored Cade Dingler from third base.

Bainbridge then struck for four in the following half inning, creating a 6-1 advantage and essentially pulling away from Cedartown. The Bulldogs added a run on a RBI single from Holiday that brought across Cuzzort in the top of the sixth.

With their backs against the wall in the top of the seventh, CHS scored two more runs. Cade Dingler grounded out but scored Jack Roper and a passed ball allowed Tanner to come home, but it was too little, too late for the Cedartown offense. A two-out groundout to shortstop by MJ Holiday brought a close to the 2021 CHS baseball campaign.

Denver Nale led the team in hits by going 2-for-3, but Cuzzort finished his high school career with a 1-for-2 performance with one run scored and one run batted in. Cade Dingler was hitless but scored once and drove in one run. Holiday was 1-for-4 with one RBI while Cupp went 1-for-2. Tanner came home once in the season-ending loss.

Tanner struck out two batters in four innings and gave up four earned runs on six hits and three walks. Camden Jackson allowed just one hit in one inning. Cade Dingler surrendered two runs on two hits and two walks in 2/3 of an inning but did strike out two Bearcat batters. Britt Baxter retired the final out of the bottom of the sixth inning.

With the loss, Cedartown’s season ends in the Elite 8. The Bulldogs finished with a 23-11 overall record. This was a fantastic season for CHS baseball though, and one that will certainly be remembered for years to come.

Cedartown was considered a dark horse in a top-heavy Region 7-4A and found a way to win the Region Championship over quality teams like Heritage-Catoosa and Northwest Whitfield. The Bulldogs blasted past Mays and upset no. 5 Flowery Branch in the Sweet 16 before falling in the Quarterfinals to no. 8 Bainbridge.

Even still, it was the deepest playoff run Cedartown baseball has had in five years.

“I have to say this was definitely a season to remember,” Johnson said in a Facebook post following the series loss. “I am so proud of what our team accomplished and the spark they brought back to Cedartown baseball. Our guys set a goal and they reached it plus more. Thank you to the Cedartown community for coming out and showing your support for these guys. We will be back next year ready to work.”