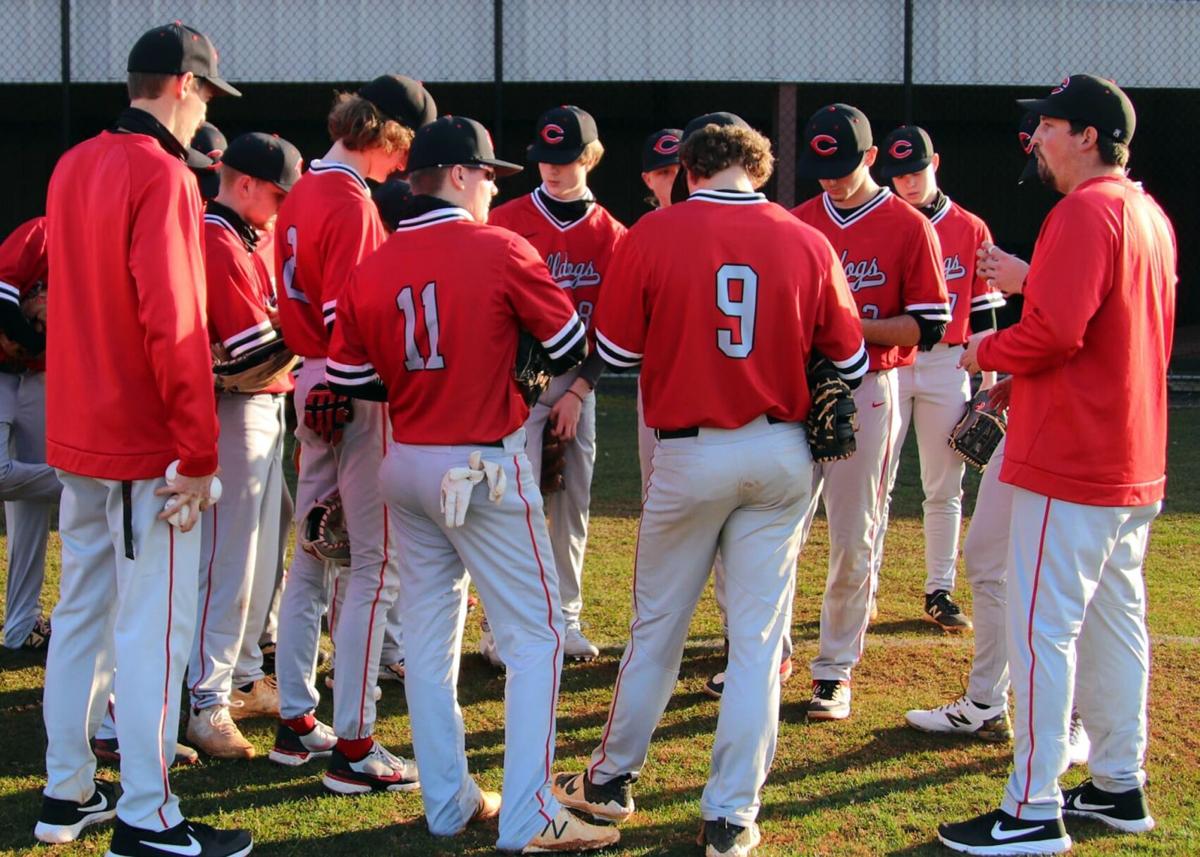 Cedartown head baseball coach Gevin Johnson (far right) talks to his team prior to last Wednesday’s preseason game against Darlington. The Bulldogs have high hopes for 2021 and are glad to be back on the field. 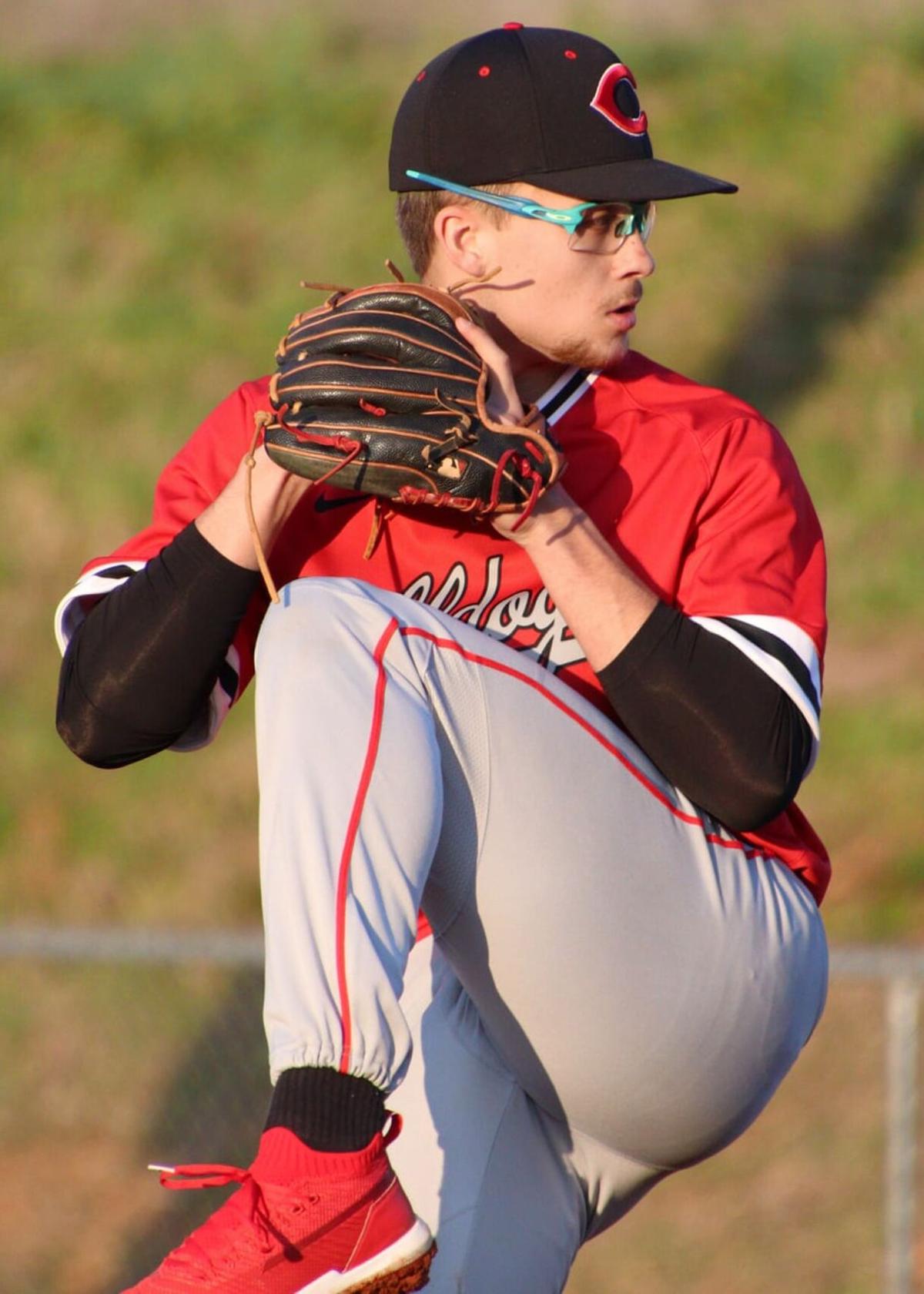 Cedartown pitcher Cade Dingler is part of a solid group of pitchers ready to take the mound for the Bulldogs this season.

Cedartown head baseball coach Gevin Johnson (far right) talks to his team prior to last Wednesday’s preseason game against Darlington. The Bulldogs have high hopes for 2021 and are glad to be back on the field.

Cedartown pitcher Cade Dingler is part of a solid group of pitchers ready to take the mound for the Bulldogs this season.

Get ready to smell the fresh cut grass and hear the familiar sounds of bats making contact and balls hitting leather as this week marks the start of Cedartown baseball.

After a 2020 season cut short due to the COVID-19 pandemic, the Bulldogs are looking forward to getting after it as a member of the new Region 7-4A.

Head coach Gevin Johnson returns to lead CHS in 2021. The third-year leader is in his seventh season overall at Cedartown High School and is incredibly excited to hit the diamond.

“The guys have been working harder than ever, and I think the main reason for that is because it’s been a long time since they’ve taken the field,” Johnson said. “It was very tough having the season canceled because I felt like we were just getting hot and could’ve done some serious damage in the region. I also felt bad for our seniors because not only did their season get canceled, but they also missed out on home games.”

The Bulldogs, who went 4-7 last year before play was halted, had zero home games. An unbelievable number of rainouts and would-be home games switched from Cedartown High School to LakePoint Sporting Complex forced the Bulldogs to play every game in 2020 either on the road or at a neutral site.

Cedartown’s last regular season home baseball game took place on April 17, 2019. That all changes this week, though, as the Bulldogs host Haralson County on Tuesday, and Johnson and the Bulldogs could not be happier.

“We are hoping to see a lot of familiar faces in the stands supporting the guys this year, especially since we couldn’t have home games in 2020,” Johnson said.

Looking at this season, Johnson believes this could be a season to remember for Bulldog baseball.

“My expectations for the team have always been high. I tell my guys each day to compete and that each player has a certain role,” Johnson said. “So, if we do the things we are supposed to do I have no doubt that this could be a great season.”

Cedartown hosted Darlington in a preseason scrimmage last Wednesday, knocking off the visiting Tigers 14-9. Sophomore infielder Dylan Cupp was 2-for-2 at the plate with a triple and three runs scored while sophomore Reece Tanner finished 1-for-1 with two runs.

“I think we will have a great season,” Johnson said. “I was just telling my coaches that we had seven sophomores starting against Darlington, so the future is bright for CHS.”

Although the scoreboard lit up in the preseason bout, Johnson’s biggest takeaway was Cedartown’s defense.

“I thought our pitchers did really good. Cade (Dingler), Reece (Tanner), Corben (Cuzzort), Jack (Roper), and Dylan (Cupp) threw really, really good,” Johnson said. “Our seniors, Cade and Zane (Barrow) had a great day at the plate, combining for four RBI’s. Cupp and Denver Nale played great infield and made some big throws, as did Harlem Diamond and Britt Baxter.”

Johnson serves as the head coach of the Bulldogs, but will be joined by returning assistant coaches Josh Davenport, Jeff Dingler, Dustin Little and Austin Pope.

After Tuesday’s season-opener against the Rebels at home, the Bulldogs will travel to Darlington on Wednesday with first pitch set for 4 p.m. They finish this week on the road, traveling to play Arabia Mountain in Stonecrest on Saturday afternoon.

Cedartown hosts Rockmart on Feb. 24 and will play at the Jackets on March 6. Cedartown competes in the Georgia Dugout Club Tournament at LakePoint Sporting Complex on Feb. 26-27 against the likes of North Paulding, West Forsyth, and Pope.

Region play for the Bulldogs begins at Ridgeland on March 9, before they return home to host the Panthers for a doubleheader on March 12. Alumni Night will be held during the Apr. 16 doubleheader against Southeast Whitfield before Apr. 20’s Senior Night doubleheader versus Heritage-Catoosa.

Fans unable to attend CHS baseball games can hear the broadcast on WGAA Radio and watch via Facebook Live.