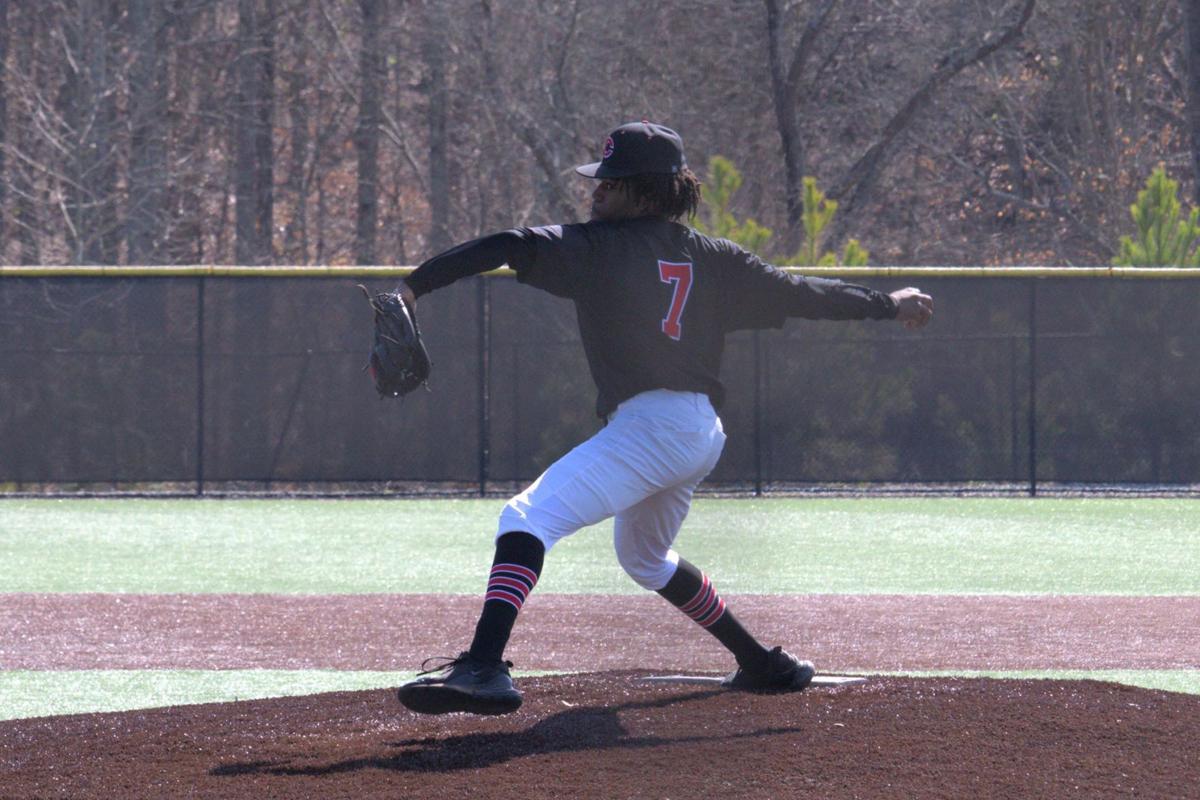 Cedartown pitcher MJ Holiday was on the mound during the team’s outing at LakePoint this past weekend. 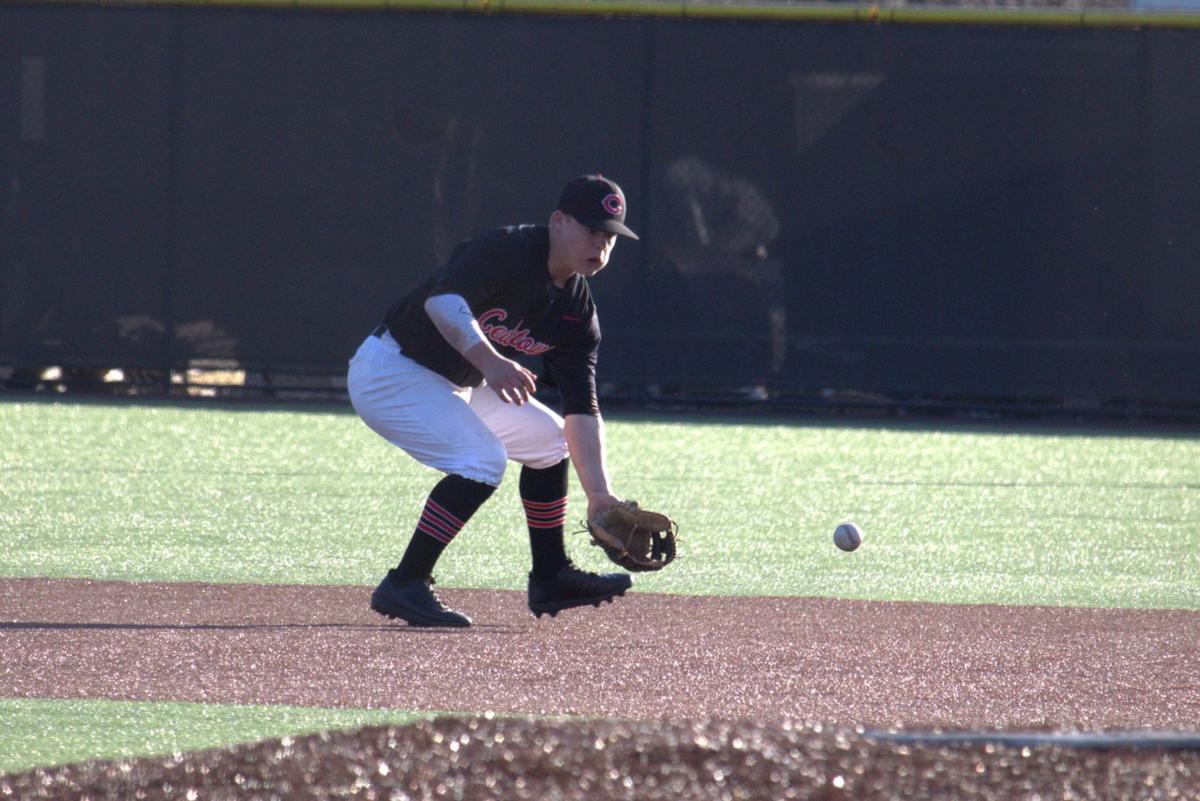 The Cedartown Bulldogs were on the road for a tournament at LakePoint in Bartow County over the weekend. 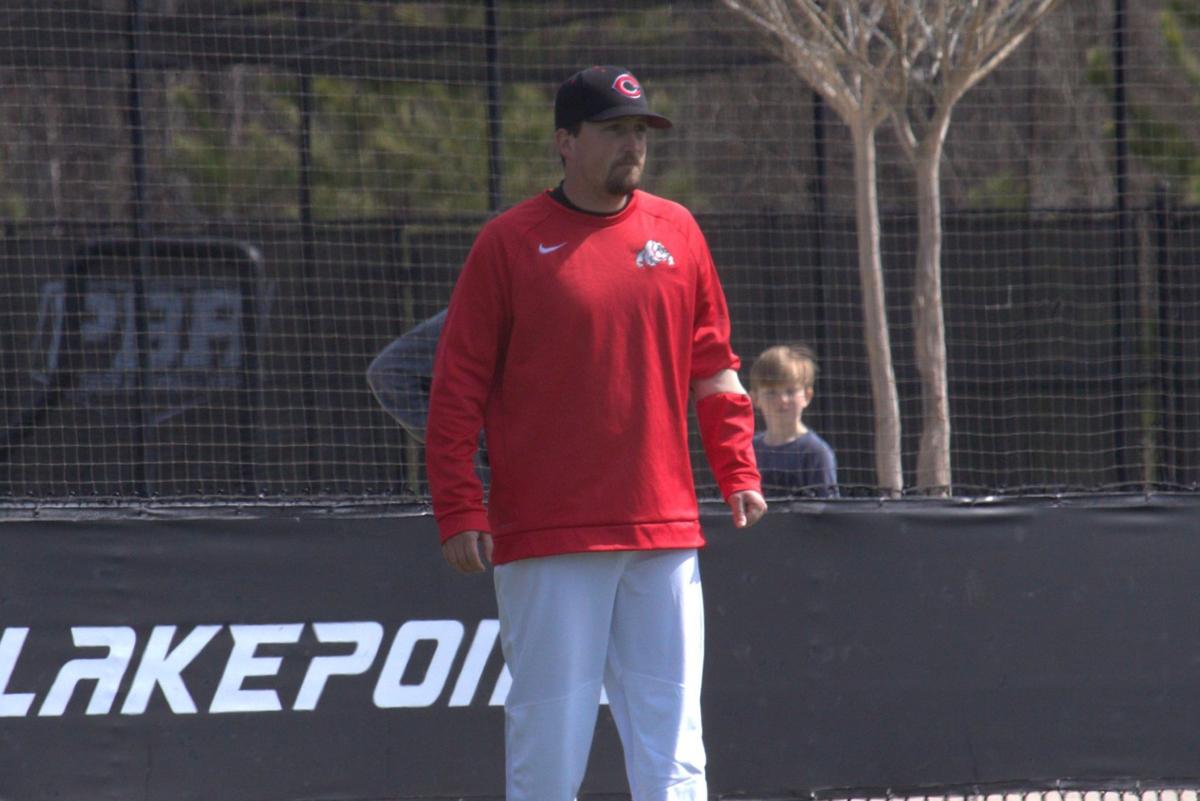 Bulldogs head coach Gevin Johnson looks on from his position at third base waiting to give the signal for runners to go during an outing over the weekend at LakePoint in Bartow County.

Cedartown pitcher MJ Holiday was on the mound during the team’s outing at LakePoint this past weekend.

The Cedartown Bulldogs were on the road for a tournament at LakePoint in Bartow County over the weekend.

Bulldogs head coach Gevin Johnson looks on from his position at third base waiting to give the signal for runners to go during an outing over the weekend at LakePoint in Bartow County.

Cedartown baseball held on for a big victory on Saturday.

The Bulldogs knocked off 3A powerhouse Cook (out of Adel, Ga.) 7-6 in the Georgia Dugout Club Tournament at LakePoint Sporting Community on Saturday afternoon. Cedartown narrowly escaped blowing a 6-run lead down the stretch of the game.

The Cook Hornets opened the game on a triple by Omar Pickett. The center fielder scored on a sacrifice fly by Hart Griffin, but that was all the damage starting pitcher MJ Holiday would give up in the first frame.

In the bottom of the first, Cedartown’s offense showed they were ready to play. Dylan Cupp, Easton Oxenreider, and Cade Dingler each picked singles to load the bases with nobody out. Cupp came home on a Jacob Bradshaw fielder’s choice, but that was all the Bulldogs could manage in the home-half of the first.

Holiday allowed a lead off base-hit to Cook’s Grant Bagley, but three quick outs retired any threat of scoring by the Hornets. Through an inning and a half, the two squads were tied 1-1.

Cedartown picked up two baserunners via walks in the bottom of the second, but a fielder’s choice and a double play retired the side.

In the top of the third, sophomore MJ Holiday recorded a three-up, three-down inning. Unfortunately, the Diamond Dawgs could not take advantage of it: Jacob Bradshaw’s double was the only success CHS found in the third.

Holiday was not done shutting down Cook batters, though. He once again faced three batters and sent each back to the dugout in the fourth inning.

Cedartown was finally able to break the scoreless streak in the bottom of the fourth. Zane Barrow singles and would score on a RBI hit by Dylan Cupp. This gave CHS a 2-1 lead through four innings.

Holiday retired the side again in the fifth to represent nine consecutive outs in-a-row for the starting pitcher.

The Bulldog offense had their best inning all season in the home-half of the fifth versus the Hornets. Cedartown completely batted around and forced Cook pitching to face eleven Bulldog batters in the fifth inning. Cade Dingler reached on an error and scored on a Corben Cuzzort sacrifice fly to give the Bulldogs a 3-1 advantage.

They were far from done. Jacob Bradshaw came around on a RBI double by Griffin Elder just a few pitches laters. Elder touched home on a bloop single by Jerry Simmons to make it a 5-1 ballgame. Cook pitching walked in runs from Simmons and MJ Holiday to pad CHS’s lead going into the sixth inning.

Holiday finally showed signs of fatigue in the sixth inning. Cook batters came with a better approach at the plate and it paid dividends for the Hornets. Omar Pickett and Hart Griffin each tallied singles to start the sixth before KJ Manning brought Pickett home on a single.

After MJ allowed his second run of the game, Coach Gevin Johnson decided to pull his young starter and put in senior reliever Seth Davis. Davis was masterful against Bremen and truly shut down the Blue Devil offense.

Davis did not have a similar outing against Cook. The Hornets scored three more runs in the inning before Davis worked out of the jam.

Cedartown went 1-2-3 in the bottom of the sixth to head into the final inning up 7-5.

Freshman Dylan Cupp came in as a closer against the Hornets. Although Cupp struggled initially with walks and allowed a run on a sacrifice fly, the Mississippi State commit picked up the final two outs to earn Cedartown a hard-fought one-run win.

Cupp was 2-3 at the plate with two singles, a run scored, a RBI, and a hit-by-pitch. Jacob Bradshaw went 2-4 versus the Hornets as he tallied a single, a double, a run scored, and a RBI. Zane Barrow also went 2-3 in the game as he picked up two singles, a walk, and a run scored. Starting pitcher MJ Holiday had arguably his best outing as a Bulldog by allowing three runs and five hits over 5 innings. The sophomore did not issue a walk in the win.

It wasn’t all great for the Bulldogs. Early in tournament play and wrapping up their three-game stint over the weekend, the Bulldogs fell to First Presbyterian Day and Metter.

The Bulldogs tried their best to come back but fell short to First Presbyterian Day in a 7-3 loss to start the tournament.

After a quick top of the first for Cedartown’s offense, FPD took a 1-0 lead in the home half of the inning when Hudson Mimbs scored on a wild pitch. Starting pitcher Cade Dingler allowed no hits but walked four batters in the bottom of the first before working out of a bases-loaded jam.

CHS tied it in the following inning. Senior third baseman Jacob Bradshaw led off the second with a double and scored after an error by FPD’s right fielder. Although Cedartown put two more base runners aboard, the offense could not capitalize and entered the bottom of the second tied 1-all.

First Presbyterian Day picked up two base runners to start the home-half of the second. Hudson Mimbs crushed a pitch from reliever Reece Tanner that scored Jackson Moore and Dylan Cox. Mimbs scored later in the inning on a single by Coleman Cauley. The successful second inning would put the Vikings in the lead for the remainder of the matchup.

Neither side found much success in the third inning. Cedartown managed a walk but Easton Oxenreider could not advance past first base before the third out was recorded. Freshman Reece Tanner tallied a three-up, three-down third inning to keep the game at 4-1.

The Bulldogs found more offensive success in the fourth. Corben Cuzzort led off the inning with a walk and came around when Jerry Simmons batted into a fielder’s choice. His score made it 4-2, but CHS could not draw any closer despite Griffin Elder and Simmons advancing into scoring position.

After another good fourth inning by Tanner, Cedartown entered the fifth knowing the game was still in reach. Unfortunately, this did not lead to hits. Bradshaw reached on an error before the side was retired.

Easton Oxenreider came in to pitch in the bottom of the fifth. The senior walked only one batter and allowed no hits to keep the game right where it was to begin the sixth inning. Offensively, Cedartown had some success in attempting to close the gap.

Griffin Elder walked and scored after a fielder’s choice by MJ Holiday to make it a one-run ballgame in the next-to-last inning. Even though Jerry Simmons made it to third base, the outfielder could not score as FPD closer Barrett Barkley shut down the rest of the offense.

The senior Shorter commit Oxenreider tried to make it up with a leadoff triple in the seventh, but he never scored as Barkley recorded three straight outs.

Nobody for Cedartown recorded more than one hit in the loss at LakePoint.

Signs of fatigue were evident throughout the Bulldogs’ 9-1 loss to Metter. Their second game of the day was did not go as positively as the game one triumph.

The Bulldogs brought across their only run of the game in the top of the sixth when Zane Barrow drove home Oxenreider.

Multiple backups earned playing time versus Metter including players such as Reece Tanner and Denver Nale.

Cedartown is back in action this week against Villa Rica on Monday after press time, and then head to Landmark Christian on Wednesday and then begin another round of tournament play on Friday against Woodland in the Battle for Bartow.

Police across US speak out against Minneapolis custody death

The Latest: UN urges $2.4 billion in aid for war-torn Yemen

Chinese grad students may be next hit by US-China tensions

Debate over $600 in jobless aid to intensify as claims rise