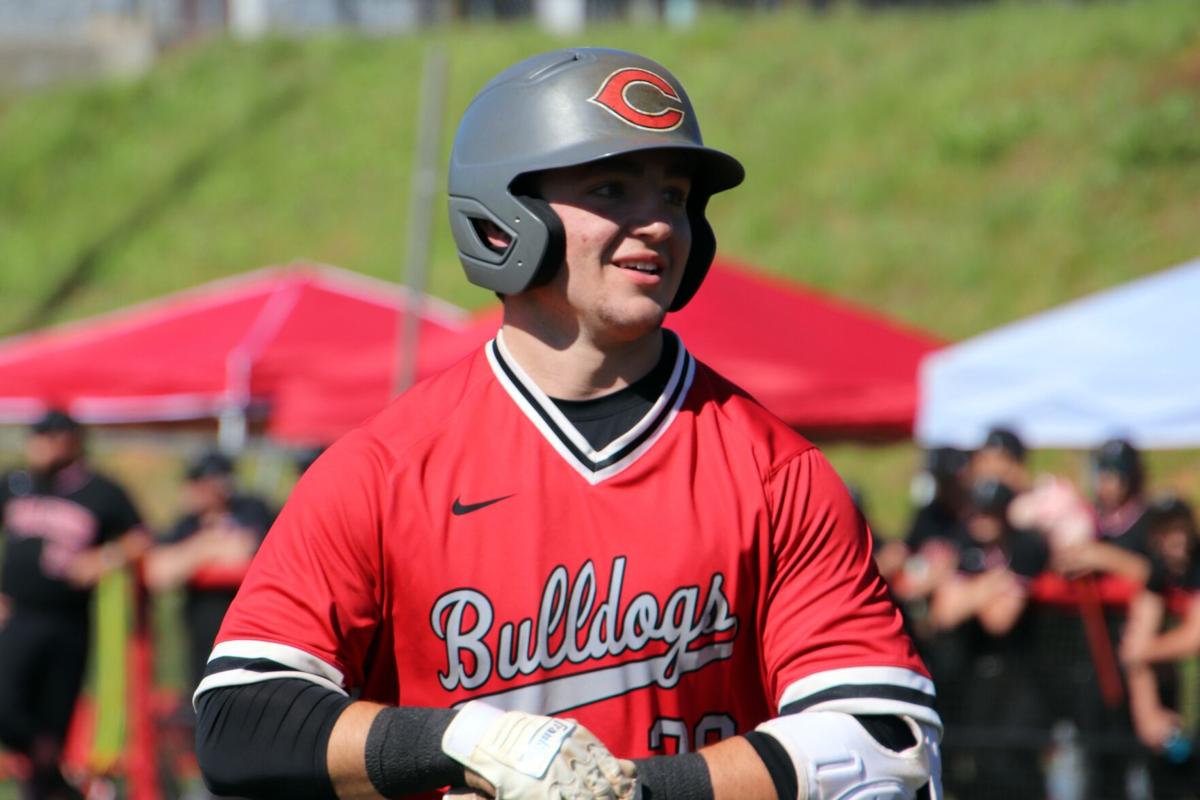 Cedartown's Eli Barrow flashes a smile to his teammates while removing his batting glove during the Bulldogs' doubleheader against Flowery Branch in the second round of the Class 4A state baseball playoffs in Cedartown on Thursday, May 6, 2021. 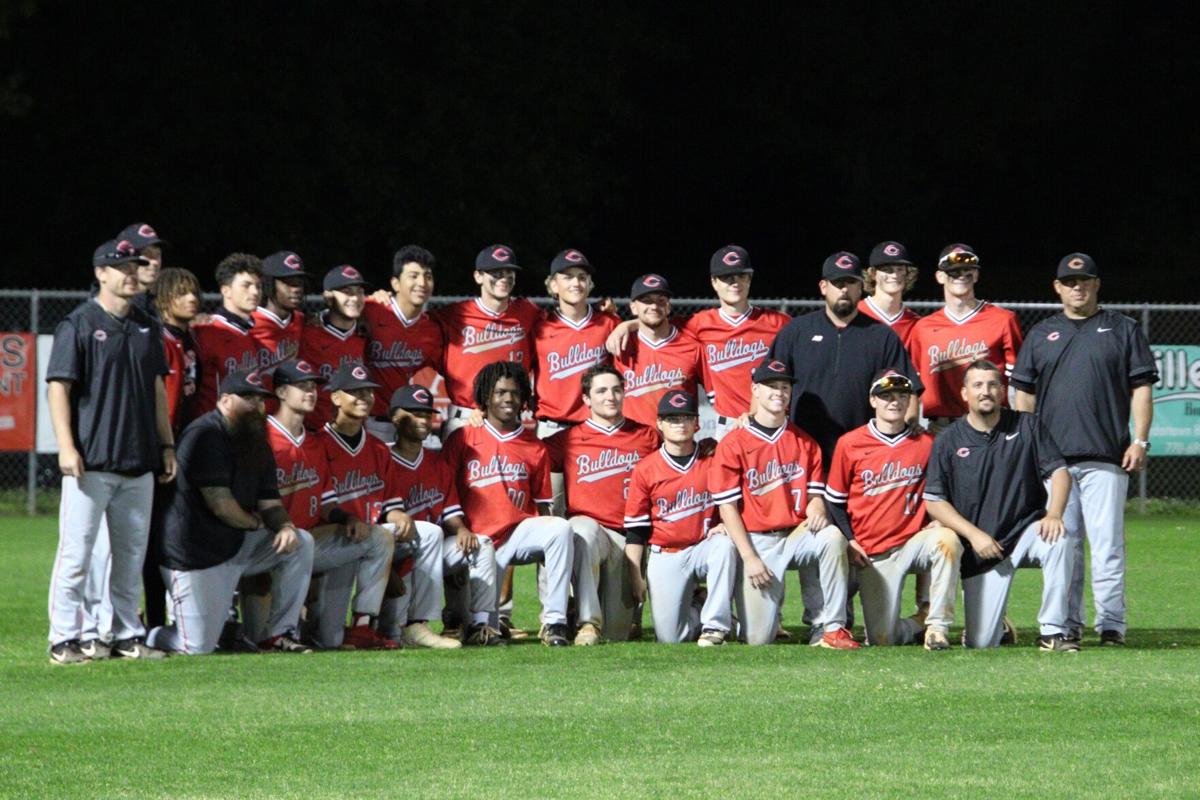 The Cedartown High School baseball team poses for a team photo after sweeping Flowery Branch in the second round of the Class 4A state playoffs on Thursday, May 6, 2021.

Cedartown's Eli Barrow flashes a smile to his teammates while removing his batting glove during the Bulldogs' doubleheader against Flowery Branch in the second round of the Class 4A state baseball playoffs in Cedartown on Thursday, May 6, 2021.

The Cedartown High School baseball team poses for a team photo after sweeping Flowery Branch in the second round of the Class 4A state playoffs on Thursday, May 6, 2021.

Once again, when the chips were stacked against the Cedartown Bulldogs they got it done when it mattered the most.

Hosting Flowery Branch in the Class 4A Sweet 16 last Thursday, Cedartown baseball pulled off a sweep of the visiting Falcons, winning 4-0 in Game 1 and 4-3 in extra innings in Game 2 to put them in the Elite Eight for the first time since 2016.

As has been a trend in the last several weeks, pitching willed Cedartown to a win in the first matchup of Thursday’s doubleheader. Senior Corben Cuzzort, just two weeks removed from a no-hitter against Heritage-Catoosa, tossed a three-hit shutout of the Falcons to win Game 1 4-0.

The Bulldog offense managed just five hits off Flowery Branch sophomore Mason Compton, who threw a perfect game at Fayette County in the first round, but found a way to push across two runs in the third inning and two runs in the fourth inning.

Eli Barrow brought home his brother Zane with an RBI single to break up the scoreless tie. Later in the third, courtesy runner Jack Roper scored on an error by the catcher. In the next inning, another defensive error resulted in two runs as Denver Nale and MJ Holiday touched home plate.

Cade Dingler led the team in hits with a 2-for-3 performance in Game 1. Eli Barrow was 1-for-2 with one RBI, Zane Barrow was 1-for-3 with one run scored, and Dylan Cupp was 1-for-3 versus the Falcons. Nale and Holiday were hitless but did score in the victory. Cuzzort recorded a complete game shutout, giving up just four walks to go along with the three aforementioned hits. He struck out one Flowery Branch batter in the win.

The second game of the Sweet 16 series was much tighter. Cedartown, visitors in Game 2 of the playoff series, jumped out in front in the top of the third inning when a sac fly from Eli Barrow scored Zane Barrow once again. The Bulldogs would add two more runs the following inning as a single from Holiday scored Cuzzort and Dingler.

Flowery Branch would not go down without a fight though. The Falcons scored their first run of the series in the bottom of the fourth before scoring again in the sixth inning. Then, down to their final two outs, the No. 5 team in the state benefitted from a sacrifice fly to score the tying run.

The Falcons actually had the bases loaded with two outs but could not bring the winning run home to walk it off in the seventh.

Reece Tanner got aboard thanks to an error in the top of the eighth, worked his way around the bases, and scored with ease on a RBI single from Cuzzort. Holiday came in to pitch in the bottom of the eighth, and the senior righty put together a quick 1-2-3 inning to win the series at Cedartown High School.

Tanner started on the mound, striking out two and giving up one earned run on one hit and three walks in four innings. Cupp gave up two earned runs on four hits and one walk but did strike out four batters in three innings. Holiday pitched the last inning, recording one strikeout.

“This was a huge win for our guys,” head coach Gevin Johnson said after the Game 2 victory. “I’m so proud of them. They just keep fighting, and we have to keep it up because once you get this deep in the playoffs, everyone is here for a reason.”

With the hard-fought sweep, Cedartown (23-9) moves further in the GHSA Class 4A Baseball State Tournament.

The Bulldogs will host southwest Georgia power Bainbridge (26-3) in the third round. Bainbridge is considered the No. 8 team in Class 4A by The Georgia Dugout Preview, so No. 9 Cedartown will have another top-ten playoff meeting at home.

Like CHS, the Bearcats came in undefeated in the postseason after sweeping Spalding and Columbus. The winner of this series will move to the Final Four to play the winner of the Marist-West Laurens series.

The Elite 8 series was scheduled to start after press time on Monday with a doubleheader and the if-necessary Game 3 on Tuesday. Check out next week’s edition of the Polk County Standard Journal for an update on how the Bulldogs fared.