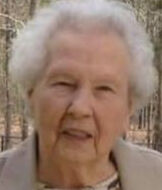 Mrs. Flossie Lujean Fowler Ferguson, age 91, of Rockmart, GA passed away Wednesday, November 4, 2020 at her residence. She was born on February 28, 1929 in the Sand Mountain community of Etowah county, Alabama a daughter of James Augustus Fowler and Minnie Shaw Fowler. Mrs. Ferguson had lived the greater part of her life in Cobb county before moving to Rockmart eighteen years ago. She was a very active member of the Rockmart First United Methodist Church. Mrs. Ferguson loved to cook and her family was of very great importance to her. She had once worked for the Georgia State Patrol where she was a type setter and she had also worked for the F.W. Woolworth Company. In addition to her parents she was preceded in death by her husband, William Rayford Ferguson, II , nine siblings and a son, William (Bill) Rayford Ferguson, III. Survivors include her two daughters: Sandra Jones and her husband Jimmy and Vicki Ferguson all of Rockmart; six grandchildren, seven great grandchildren and one great great grandson. A private family graveside service was held in the Powder Springs Memorial Gardens with Rev. Jeanette Dickens officiating. Pallbearers included: Jimmy Jones, Jimmy Jones, II, Michael Newton, Jacob Newton, Maggie Newton, William Ferguson and Brett Crawford. Sandi Atkins served as an honorary pallbearer. The Alvis Miller & Son Funeral Home & Crematory was in charge of arrangements for.

To plant a tree in memory of Flossie Ferguson as a living tribute, please visit Tribute Store.
+1
Plant a tree

'THIS IS ME': Rioters flaunt involvement in Capitol siege

Biden walking a high wire with Russia ahead of Putin call

Trump impeachment goes to Senate, testing his sway over GOP

This movie group is bringing the Sundance Film Festival to Atlanta

After a deadly week, who's to blame for vaccine woes?

Students return to Cobb classrooms after a week of remote learning