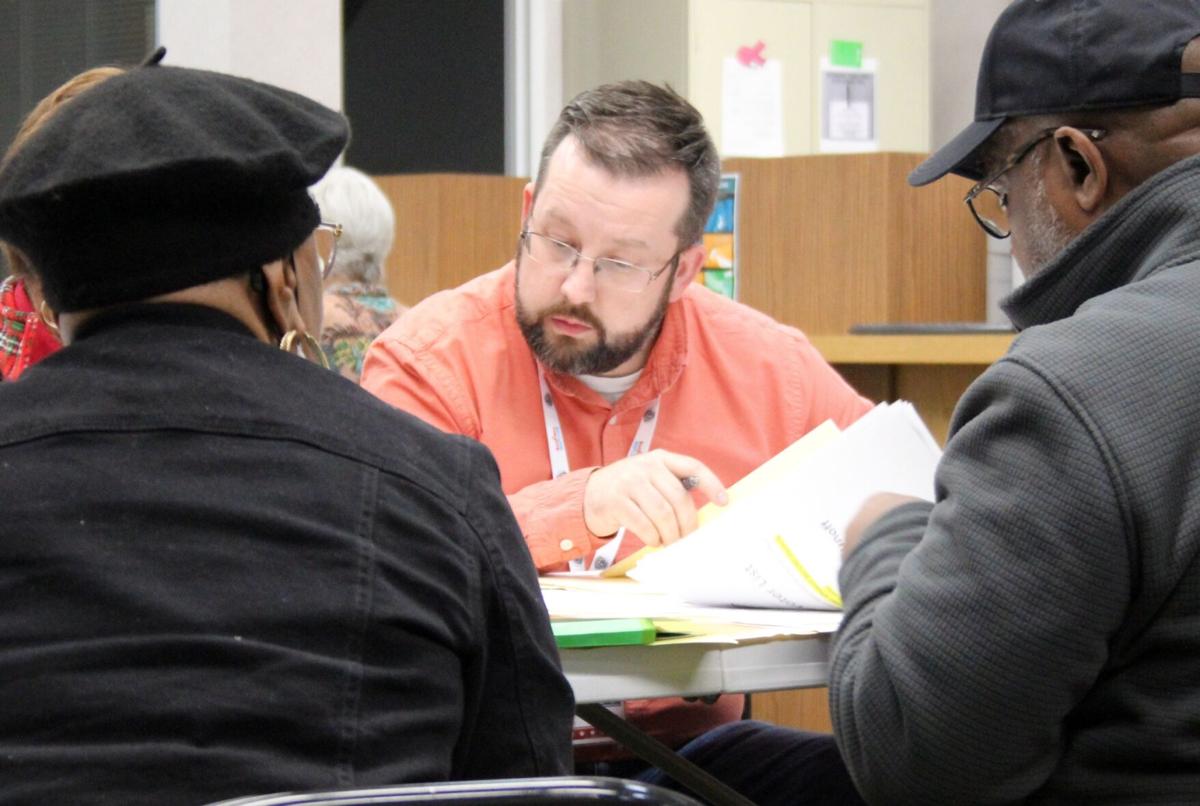 Polk County Board of Elections member Ryan Robinson looks over the returns from the Lake Creek precinct after polls closed on Tuesday, Jan. 5, for the Georgia state runoffs. 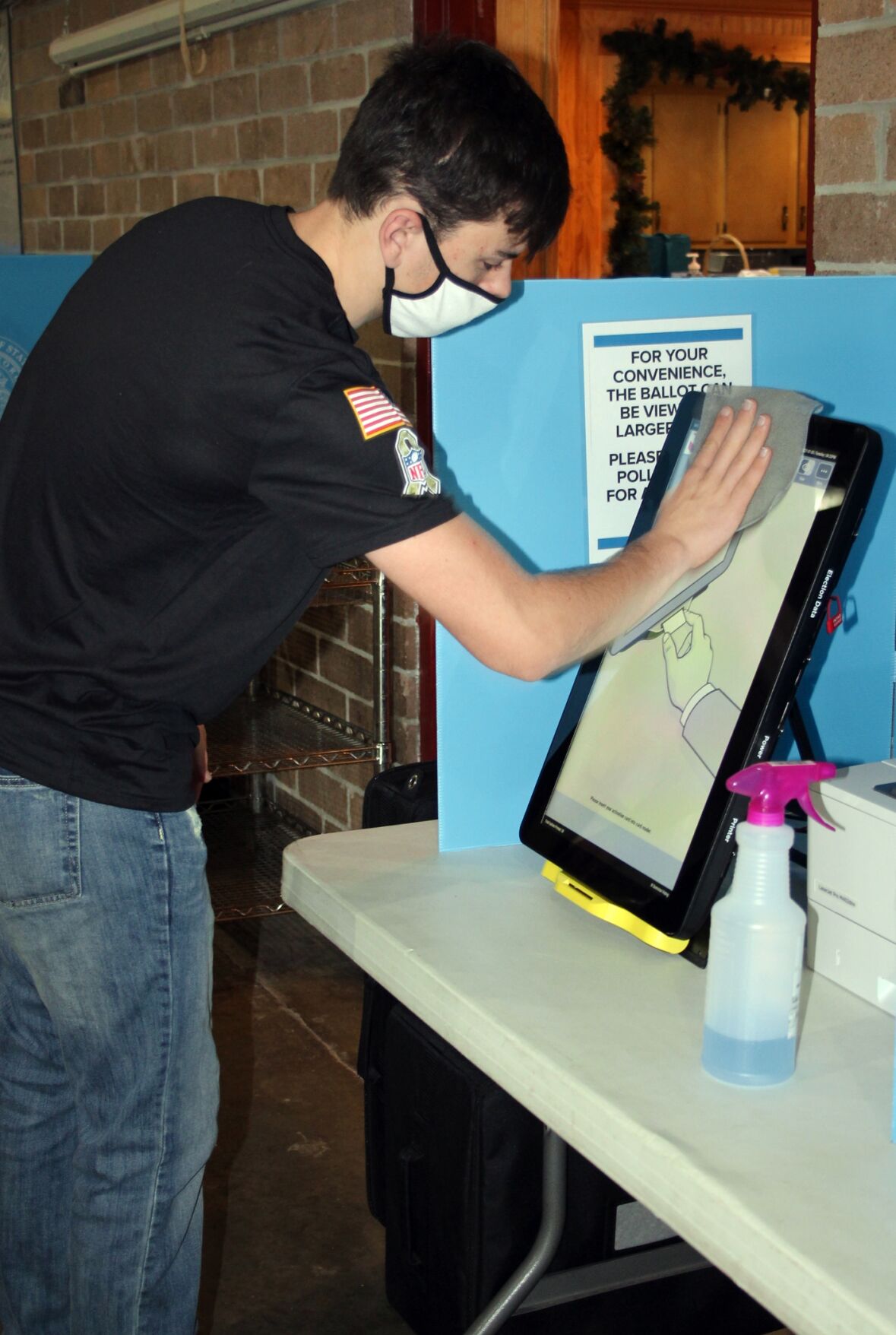 Poll worker Caleb Terrill wipes down one of the voting machines at the Blooming Grove precinct to sanitize it between voters during the Georgia state runoff on Jan. 5.

Polk County Board of Elections member Ryan Robinson looks over the returns from the Lake Creek precinct after polls closed on Tuesday, Jan. 5, for the Georgia state runoffs.

Poll worker Caleb Terrill wipes down one of the voting machines at the Blooming Grove precinct to sanitize it between voters during the Georgia state runoff on Jan. 5.

Capping off an election year so expansive that it went over into 2021, Georgia’s final election day of the 2020 cycle came and went in Polk County without much fanfare Tuesday, Jan. 5, as the more than 10,000 ballots cast early or absentee alleviated any long lines at the polls.

Nearly 70% of ballots cast in the statewide runoff elections by Polk County voters were through advanced in-person voting or by absentee ballot, a percentage that helped things go smoothly with little to no waiting at the county’s seven precincts.

“We were very pleased with how things went,” said Brande Coggins, election coordinator for Polk County.

As far as overall turnout, the high-interest in both U.S. Senate races led to a record-breaking election for Polk County in terms of runoff elections. A total of 14,780 voters cast ballots, meaning around 57% of Polk County’s active registered voters participated in the election.

In comparison, a little more than 4,200 voted in the Aug. 11, 2020, runoff for state house and senate primaries, which was about 1,600 more than the previous Polk County runoff record set in the 2018 gubernatorial runoff.

Polk County elections officials reported 8,119 people voted in-person during the advance voting period for Tuesday’s runoffs, while 2,093 absentee ballots were returned. The county board of elections is scheduled to gather Wednesday, Jan. 13, to officially certify the results and report them to the Georgia Secretary of State’s office.

Coggins said the Polk County Office of Elections and Registration had heard a few complaints about voters being told they had already voted when they went to the polls on Jan. 5, but she explained these were due to situations where the cards used to load the ballots onto the voting machines were not encoded properly.

Coggins said each one of the instances were corrected and the voter was able to cast their ballot.

While the battle for Georgia’s two U.S. Senate seats came down to slim margins, Polk County voters made their choices clear with Republican incumbents David Perdue and Kelly Loeffler winning by wide margins.

Perdue finished with 77.75% of the vote in Polk County, getting 11,546 votes to Democratic challenger John Ossoff’s 3,305. Loeffler nearly mirrored Perdue’s margin of victory, getting 77.61% over Raphael Warnock as the Democratic candidate got 3,325 votes to Loeffler’s 11,525.

However, both Republican candidates would concede to their Democratic counterparts later in the week as both fell behind in the overall vote count.

Perdue conceded to Ossoff on Friday afternoon, limiting the Sea Island Republican to just one term that ended on Jan. 3. His announcement came a day after Loeffler conceded to Warnock after only a year in office.

Ossoff, a 33-year-old Atlanta native who runs an investigative journalism company, is set to become the Senate’s youngest member and Georgia’s first Jewish representative in the chamber. He held a slim but insurmountable lead of nearly 50,000 votes with a few thousand ballots left to be counted late Friday.

Warnock, a Savannah native and the senior pastor of Atlanta’s Ebenezer Baptist Church, had built up an even stronger lead than his co-campaigner by roughly 83,000 votes Friday. He will become Georgia’s first Black senator after preaching from the same pulpit once held by Dr. Martin Luther King Jr.

With voter turnout hovering at 4.5 million, the runoffs solidified Georgia’s position as a battleground state with closely fought elections for at least the next decade and particularly in 2022, when Gov. Brian Kemp will likely face Democrat Stacey Abrams in a rematch of the heated and close 2018 gubernatorial election.

McDonald, who served 20 years in the Georgia House of Representatives before joining the PSC in 1998, fended off a series of criticisms from Blackman, an environmental advocate who also lost to McDonald in 2014.