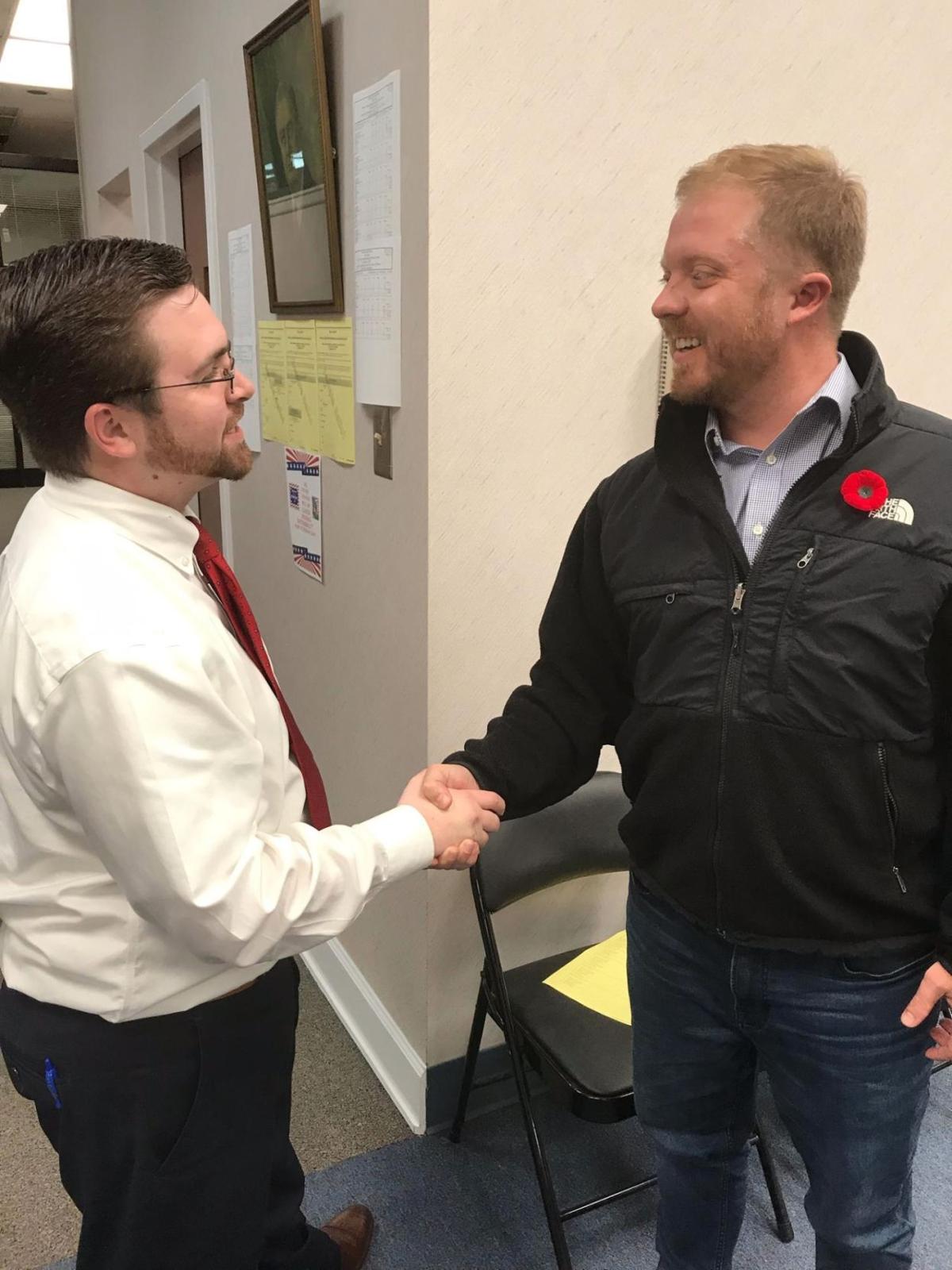 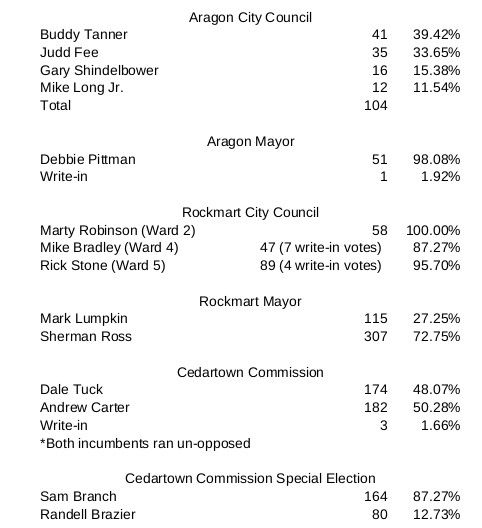 The above numbers represent the results provided by the Polk County Board of Elections on Tuesday night, November 5, 2019.

The above numbers represent the results provided by the Polk County Board of Elections on Tuesday night, November 5, 2019.

The returns came back fast in Polk County for municipal elections that saw a new commissioner, new mayor and new council member ahead for Cedartown, Rockmart and Aragon.

With less than 1,000 ballots cast in 2019 municipal elections, voters chose Cedartown’s Sam Branch to take over a seat on the Commission, Sherman Ross to serve as Mayor of Rockmart, and Buddy Tanner to serve on the Aragon City Council. Council member Judd Fee also retained his seat in a four-candidate race for two seats.

Branch with 164 votes won over Randell Brazier with 80 votes for the seat formerly held by Jordan Hubbard. Branch will be sworn in and take over the remaining time on the seat during the November Cedartown City Commission meeting.

“I’m very excited about the future and what I think we’ll be able to do as a City Commission. It’s already a great board, and I’m extremely honored to have the opportunity to be a part of that board,” Branch said. “I just want to take the time to thank the citizens of Cedartown for trusting in me... This is one of the greatest little cities in Georgia, and we’re going to keep it that way.”

Branch said one of his first priorities will be to work with recreation and youth after hearing from Cedartown Youth Baseball representatives at the city’s recent work session on Nov. 4.

“Every small town tries to do, and this is something that Cedartown has done and we’re going to continue to do this: is focus on our youth, our children,” he said. “The Cedartown Youth Baseball board has done a phenomenal job with that program, and one thing I want to do is to continue to support that program and take a lot of what they’ve done and see if we can apply it to our other programs, like softball, football and of course with soccer coming up with that complex being built.”

With a 307-115 win, Ross will begin a four year term as the new Mayor of Rockmart in January. He won out 72.75 to 27.25% over WZOT co-owner and Polk School District administrator Mark Lumpkin.

Ross said he was thankful for all those who helped him with his campaign, from stuffing envelopes to placing his signs out in their front yards. He said his win in the race was a team effort.

“I look forward to working with the new council — especially new members — and the department heads to keep Rockmart moving forward in a positive direction,” Ross said.

He said one of his first action items coming into office in January will be to gather stakeholders in the community to tackle a growing homeless problem within Rockmart. He seeks to work with Rockmart Police Chief Randy Turner and other organizations like Crossview Community Church, Mosaic Place and more to help with the problem.

“One of the first steps is to help find avenues to put people on the right path,” he said. “I look forward to working with several people and groups in the community to make this situation better.”

Ross said he wants find ways to help Rockmart’s homeless population without having to cause people any additional trouble in their lives.

Tanner will join the board in January when he is sworn into office to take over the seat being vacated at year’s end by Debbie Pittman, who will be the new mayor after seeking the seat without any competition.

Additional uncontested races included the two commission seats in Cedartown held by Dale Tuck and Andrew Carter, and council seats in Rockmart including incumbent Rick Stone, and new council members Marty Robinson and Mike Bradley. Stone keeps his Ward 5 seat on the council, while Bradley replaced Ross without opposition to take on the remaining time on the Ward 4 seat, and Robinson takes over the Ward 2 seat from James Payne, who elected not to run for a new term.

With this year’s election over, Polk County polling places will re-open come March for presidential primaries, and then in May for state and local primaries. Next November will also mark the first election utilizing new voting machines within the state.

Judge rules against Florida on felons paying fines to vote

Skiing in Colorado to resume amid coronavirus pandemic