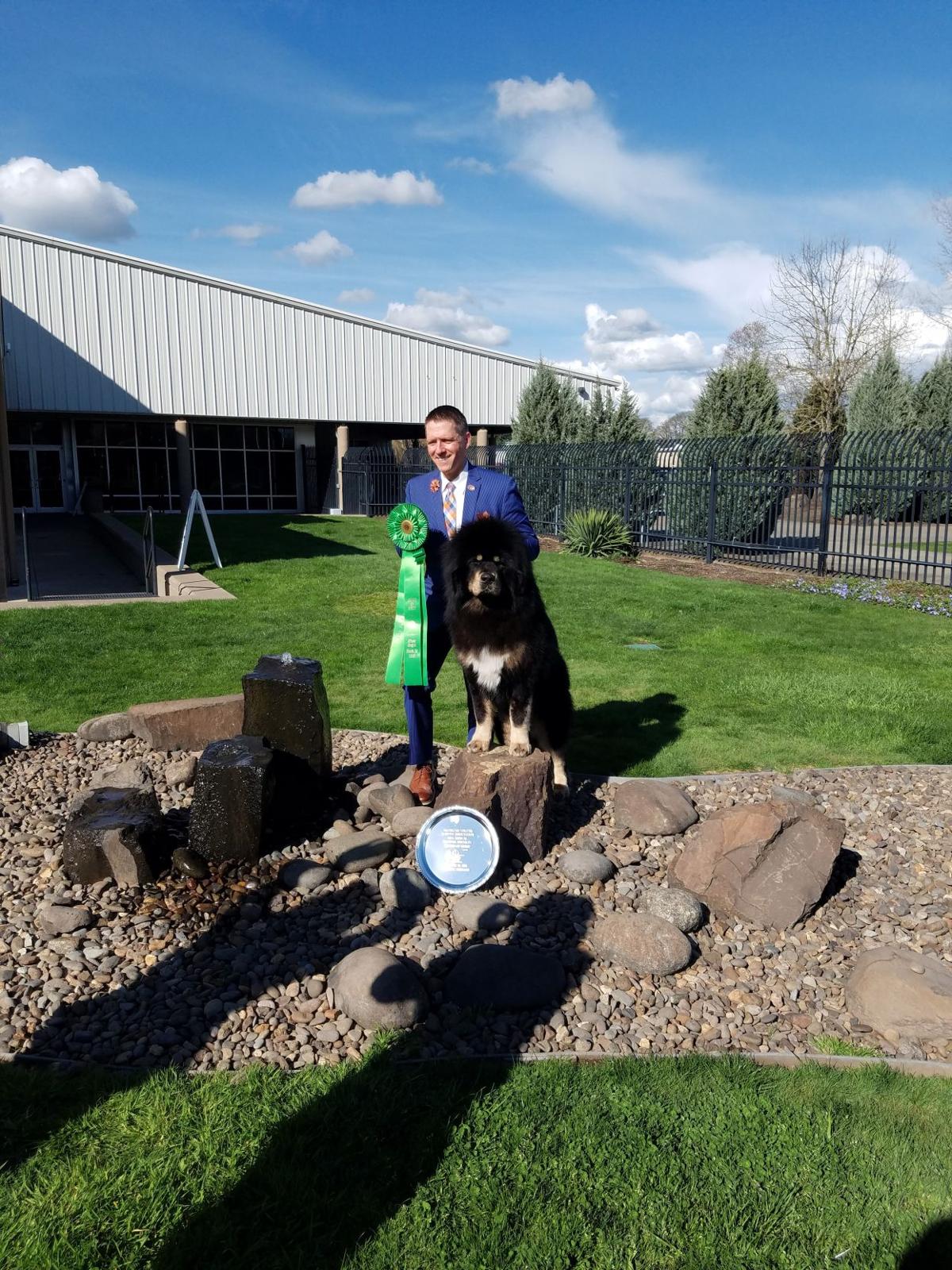 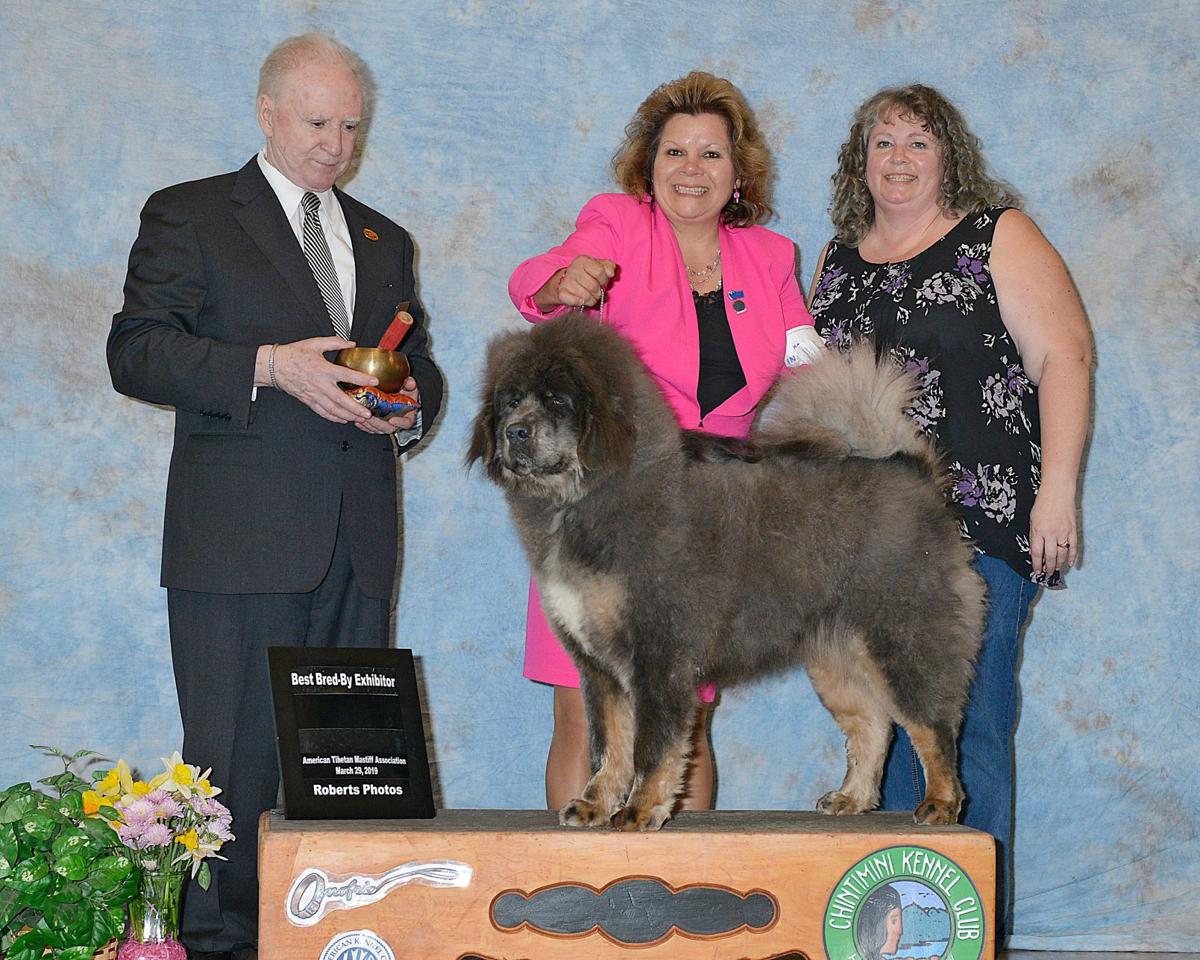 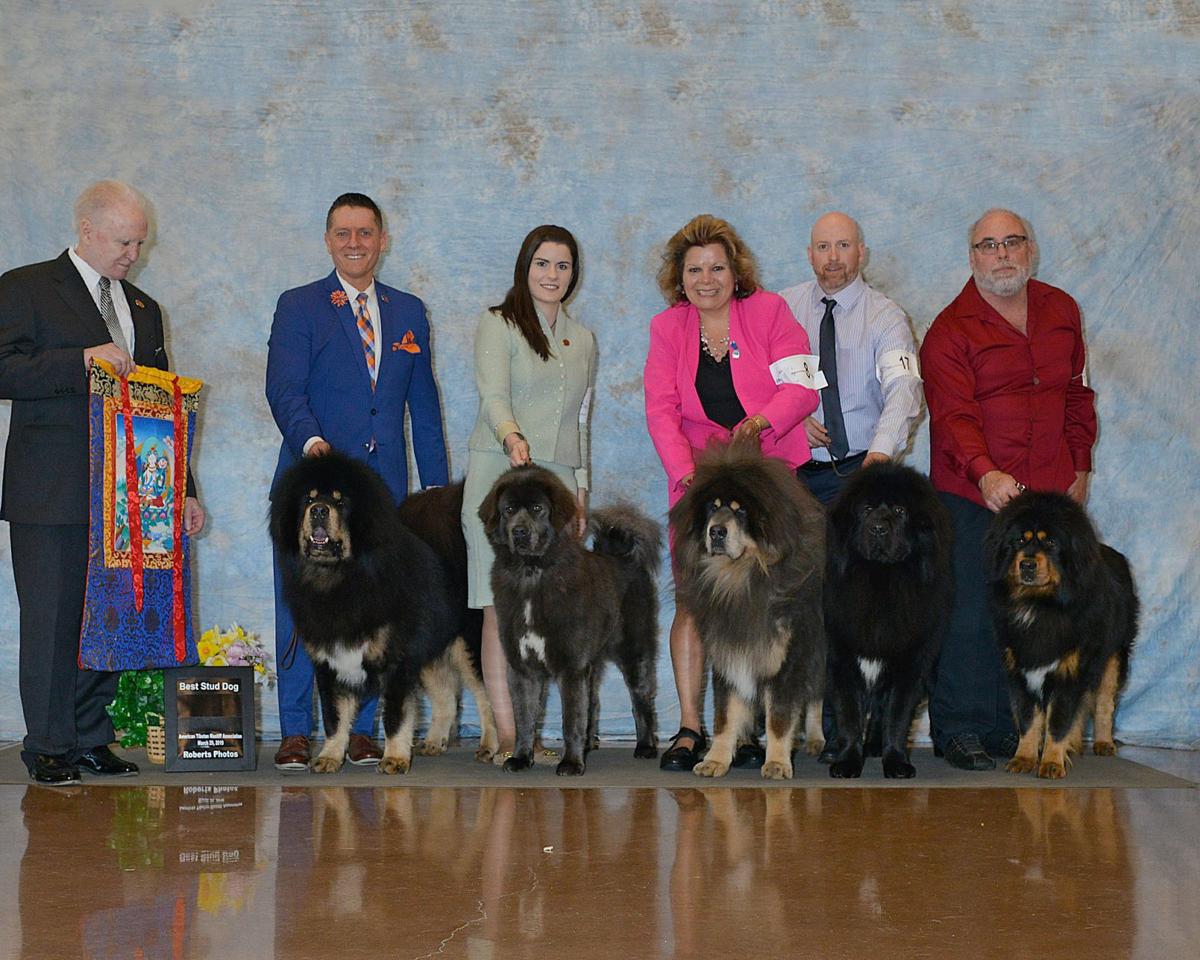 Best Stud Dog at the American Tibetan Mastiff Association’s National Specialty “”Evo GRCHS CH Dreamcatcher Cairbre To Lokis Major At Aujudon Pictured with his offspring. The Stud dog is judged on the merits of his offspring. Pictured are Judge Dr John A. Reeve-Newson, Tony Carter with Evo, Amie McLaughlin with Saoirse, Audrey Lee with Moksha, Joe Youngloncoln with Dorje and Pat Connelly with Jaxx. / Contributed 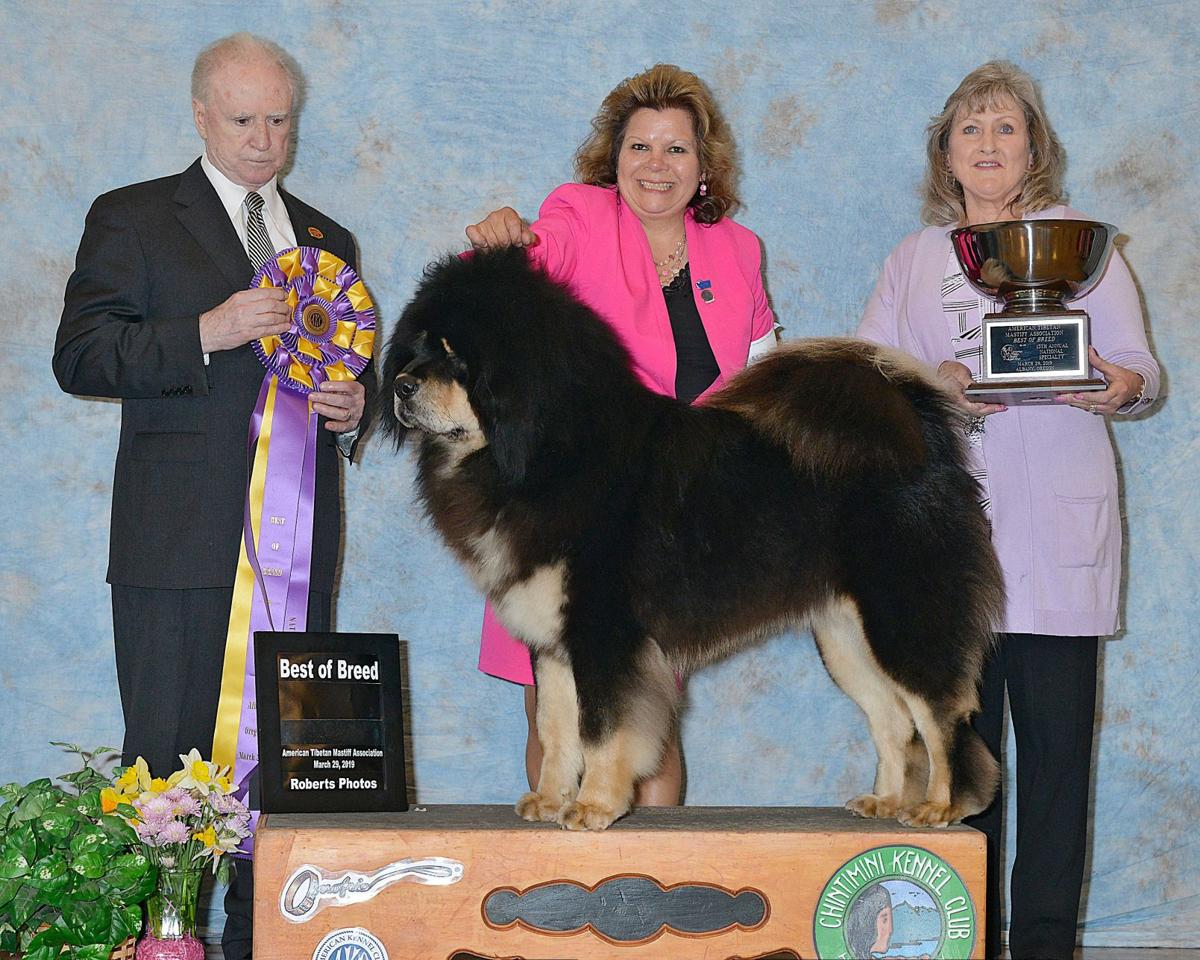 Best Stud Dog at the American Tibetan Mastiff Association’s National Specialty “”Evo GRCHS CH Dreamcatcher Cairbre To Lokis Major At Aujudon Pictured with his offspring. The Stud dog is judged on the merits of his offspring. Pictured are Judge Dr John A. Reeve-Newson, Tony Carter with Evo, Amie McLaughlin with Saoirse, Audrey Lee with Moksha, Joe Youngloncoln with Dorje and Pat Connelly with Jaxx. / Contributed

Coming on the heels of a huge win of Best of Breed and Best of Opposite Sex to Best of Breed at Westminster Dog Show, local business owner Audrey Lee is celebrating again.

The top honor of Best of Breed went to Aine, (pronounced An-ya), who’s official name is Dzhozias Aine Dreamcatcher At Aujudon, handled by Lee, and owned by Lee and Debbie Slayton of Dreamcatcher Tibetan Mastiffs of Graham, Washington.

She was handpicked by Slayton to come to the United States, after careful research and forming a relationship with top breeders in Russia. Aine arrived in the United States at 5 months old and lives with Lee.

“She has been a very exciting addition,” says Lee.

In addition, Lee and Aine won Best Owner-Handled Best of Breed at the Chintimini show the same weekend, and went on to win first place in the Owner Handled Working Group. Advancing to compete in Owner Handler Best in Show, the honor went to another lovely exhibitor.

“It was great to get that far! Just to win and advance to the Best in Show ring was a big honor,” Lee said.

Since her arrival, Aine has made her mark in the show world! She is groomed, trained and handled by Lee. She finished her AKC Championship at 7 months old, her AKC Grand Championship at 8 months old, and Best of Breed at the Central Florida Working Dog Specialty, all at under a year old.

“It’s been a whirlwind and dream come true,” Lee said.

Disappointingly, co-owner Slayton was unable to attend Westminster and see Aine’s big win there, due to the bizarre snowstorm that blanketed the PNW at the time. It grounded flights from Seattle to NYC.

Slayton was ecstatic to see Aine in action in the ring in Albny.

She said that “Aine was THE talk of the show and has definitely made a big splash in the Pacific Northwest this weekend!”

In addition, Lee’s Tibetan Mastiffs enjoyed other awards at the American Tibetan Mastiff’s National Specialty. “Evo,” handled by professional handler Tony Carter, (Seattle, WA) won Select male in Breed and for the third time in a row was Best Stud Dog in Breed.

Evo was the No. 1 Tibetan Mastiff in the US for 2018. Carter also piloted Evo to Best of Breed this year and last year at Westminster Dog Show. Evo’s official name is GCHS CH Dreamcatcher Cairbre To Lokis Major At Aujudon, bred by Debbie Slayton, Brad Slayton and Tony Carter

Lee enjoyed further success, winning Best Bred By Exhibitor in Breed with “Sorcha” at the Specialty show. The Bred By Exhibitor class denotes Lee was the breeder, owner and handler of the dog exhibited. Sorcha’s official name is AUJUDONS SORCHA ENCHANTRESS O THE KEEP RIVERHAVEN. Sorcha resides with co-owners Carole and Brian Hughes of Ravensdale, WA.

Lee and her Tibetan Mastiffs will attend a few more shows this spring, and have the summer off while the dogs are in summer coat. Lee states, “We have just a few weeks left for the dogs to be in competitive winter coat, then they will shed all their undercoats and be in a much sparser summer coat.”

Audrey Lee is the founder and owner of Cedartown Pet Boutique, which was established 1993. She and husband Don Lee reside in Polk County.

The Latest: Dems debate whether ultrawealth is anti-American

The Hill criticizes, but does not recant, Solomon articles

Lawyer: Assange was offered US pardon if he cleared Russia