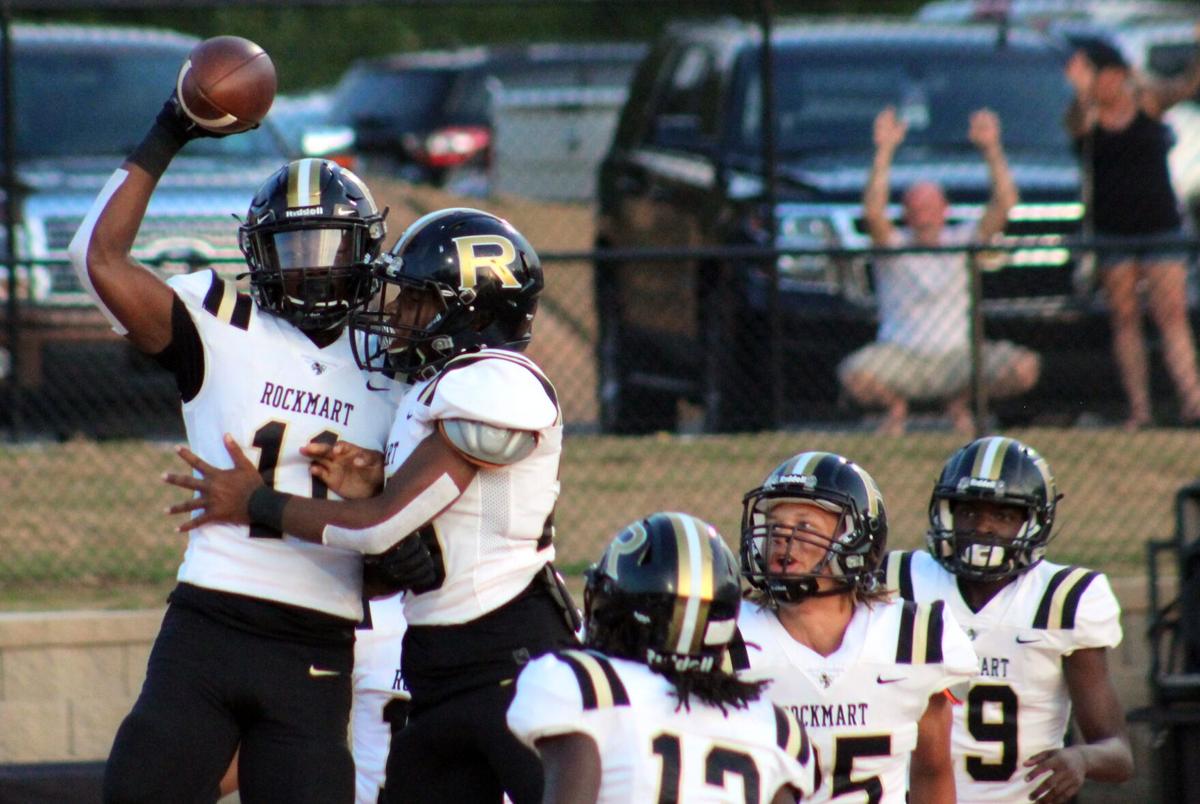 Rockmart’s Dennis Sims (11) celebrates with teammate Nyreon Cooper in the end zone after returning a punt 45 yards for a touchdown in the first quarter of Saturday’s game at Villa Rica High School. 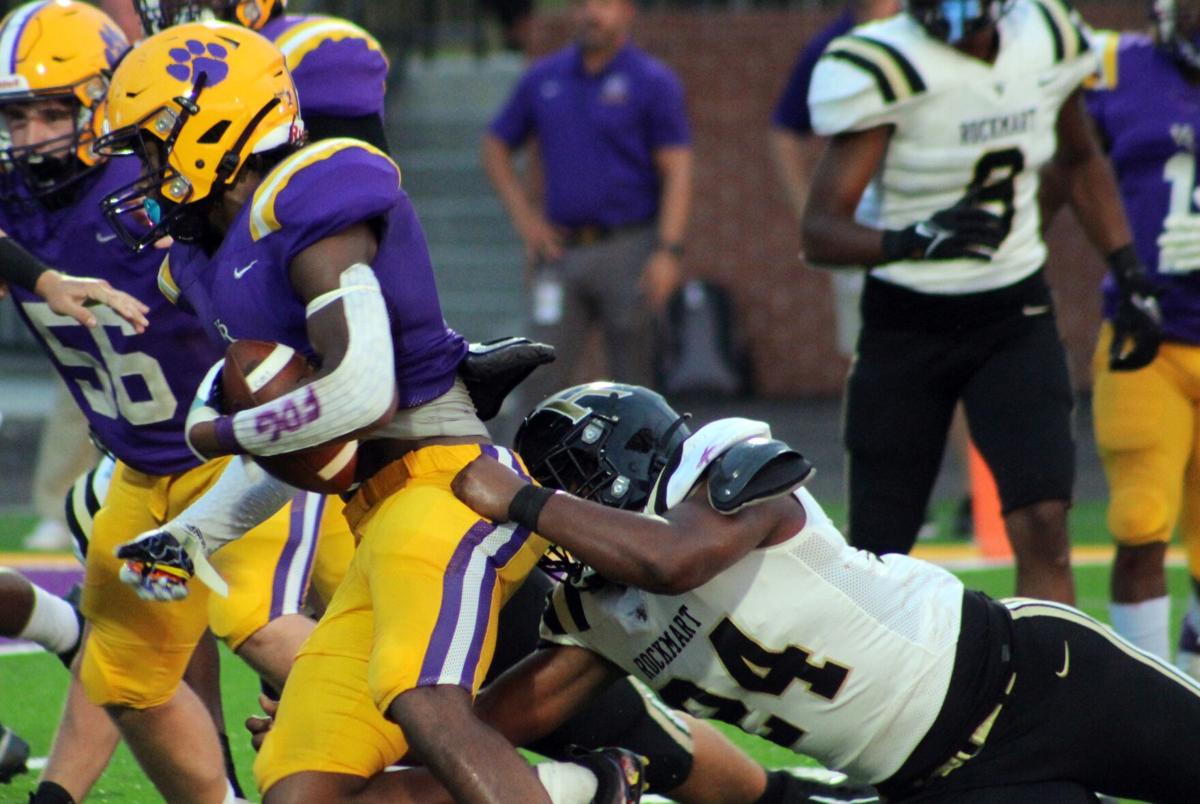 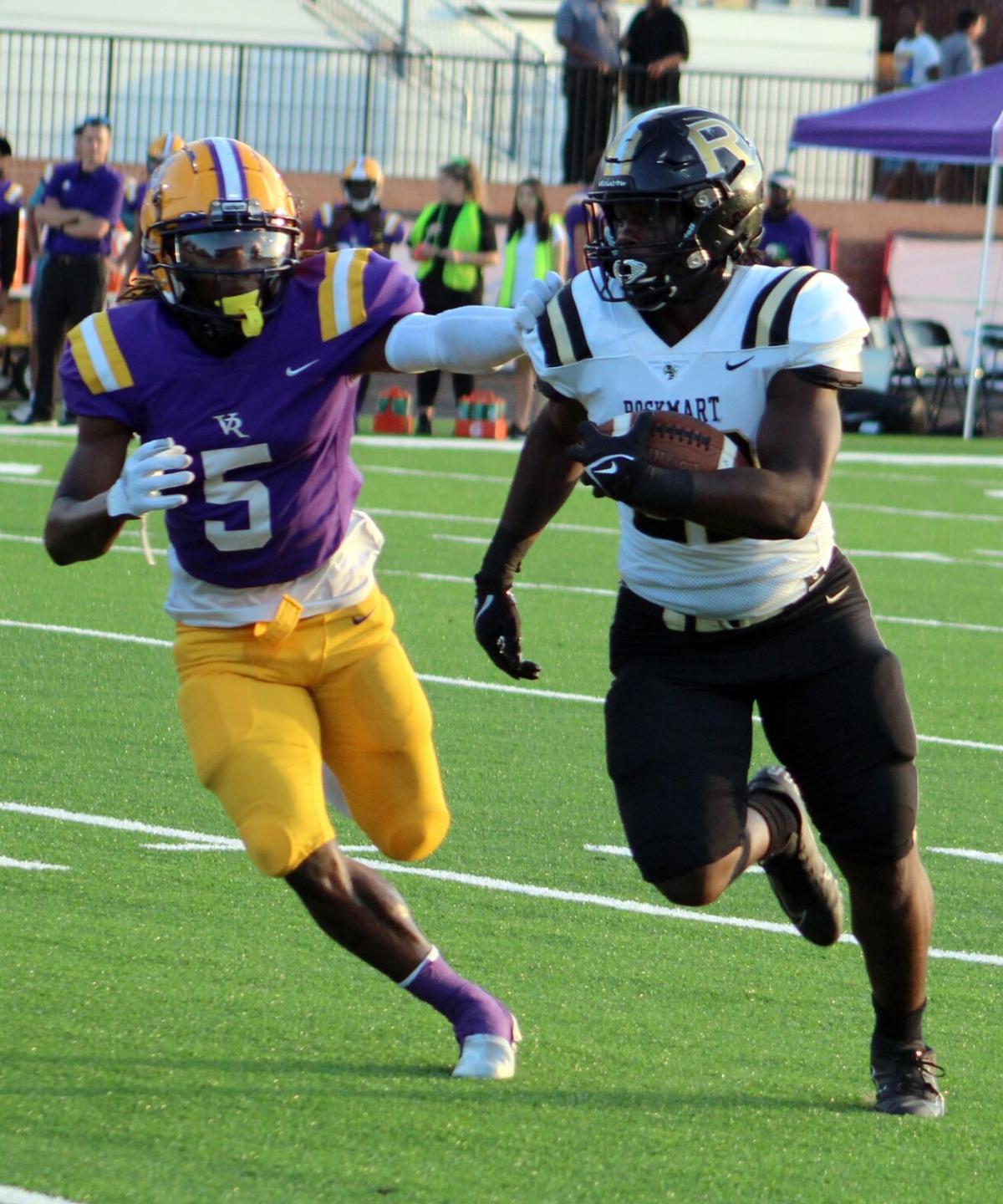 Rockmart's Brent Washington (right) is run down by Villa Rica's Ty McKey during the first quarter of Saturday's game in Villa Rica.

Rockmart’s Dennis Sims (11) celebrates with teammate Nyreon Cooper in the end zone after returning a punt 45 yards for a touchdown in the first quarter of Saturday’s game at Villa Rica High School.

Rockmart's Brent Washington (right) is run down by Villa Rica's Ty McKey during the first quarter of Saturday's game in Villa Rica.

VILLA RICA — Dennis Sims put Rockmart on the board first and then sealed the victory for the Jackets on Saturday in a game that didn’t exist until three days before it was played.

The junior playmaker returned a punt 45 yards for a touchdown midway through the first quarter and then intercepted a Villa Rica pass with less than a minute left in the game as Rockmart defeated the host Wildcats 28-21.

Rockmart head coach Biff Parson talked about how even though his team has been able to continue to prepare, they have dealt with injuries and illness in the last two weeks, with some coaches and players not able to be 100% at practice or at games.

Some of the Jackets’ reliable players like Keyshaun McCullough, Lanear McCrary and JoJo Haynes were sidelined Saturday night.

“You talk about adversity. You talk about teaching these kids to overcome and have some resiliency,” Parson said. “I mean we’re just down. But these kids fought and battled and scratched and clawed, and we didn’t do a lot of things well, but what we did is we finished and played for four quarters.”

Up until Wednesday, Rockmart (1-1) had been preparing to play their cross-county rival in Cedartown on Friday before an increase in COVID-19 cases among the Bulldogs forced school officials to put the program on a 10-day no-activity list to try and halt the spread of the disease.

“And it was in their eyes when I told them Wednesday that that game wasn’t going to happen, and they were mad,” Parson said.

It just so happened that Villa Rica had its Week 2 game against Temple canceled after the Tigers’ program came up with COVID concerns, leaving the Wildcats looking for a game to fill the gap in the schedule.

The non-region contest saw Rockmart have to overcome penalties and some tough match-ups against the Class 5A squad. But the Jackets went into halftime tied 14-14 and knew they would need to reach down to try and win their first game of the 2021 season.

“We put ourselves in a position for a football game and gave those guys hope,” Parson said of his team’s standing at the half. “They were looking for some hope and we gave them hope. Because we didn’t play well in the first half. And I told them that we’re going to find out a lot about our team these next two quarters, and we found out how tough they are.”

Villa Rica (0-2) missed a 49-yard field goal at the end of the first possession of the second half. Rockmart held the Wildcats to a three-and-out on their next possession, but the snap on the punt went over the punter’s head.

With no Villa Rica player attempting to recover it or kick it out of the back of the end zone, Rockmart’s Jake Bailey scooped it up as it tumbled across the goal line for a touchdown. Jose Alegria connected on his third of four extra points on the night to put the Jackets up 21-14.

Rockmart found itself back in a tie game minutes into the fourth quarter as Villa Rica quarterback Colby Nalley completed an 11-yard touchdown pass to Caleb Odom to cap the Wildcats’ next drive.

Both teams punted on their next possessions, leading to a gritty performance by the Jackets as they started a drive at the Villa Rica 49-yard line and converted on fourth-and-2 on the way to a 29-yard touchdown run by Nahzir Turner with 1:13 left on the clock.

The Wildcats nearly bobbled away the ensuing kickoff, but recovered to start at their own 22. After Deidric Gibson broke up a Nalley pass to Odom on the first play of the drive, Sims found his way in front of a pass intended for Villa Rica’s Ty McKey on the next play.

With less than a minute to play, Rockmart was able to run out the clock after Brent Washington had a 6-yard run on third-and-5 to convert.

Washington finished with 102 yards on 13 carries, while Jacket quarterback JD Davis passed for 62 yards and ran for another 56, including a 35-yard touchdown on a one-play drive in the second quarter.

Villa Rica was held to 95 yards rushing total, with Nalley throwing for 115 yards and two touchdowns.

The victory was the Jackets’ first over Villa Rica since 1985, according to the Georgia High School Football Historians Association. Rockmart had not played Villa Rica since 2003 prior to Saturday’s game, with the Wildcats having won the last 10 meetings.

Rockmart will now head into its first open week of the season before diving into region play on Sept. 10 hosting 6-3A foe Coahulla Creek. The game will also mark Rockmart’s Homecoming.

James Barron: District 2-3A just might be the toughest district in the state