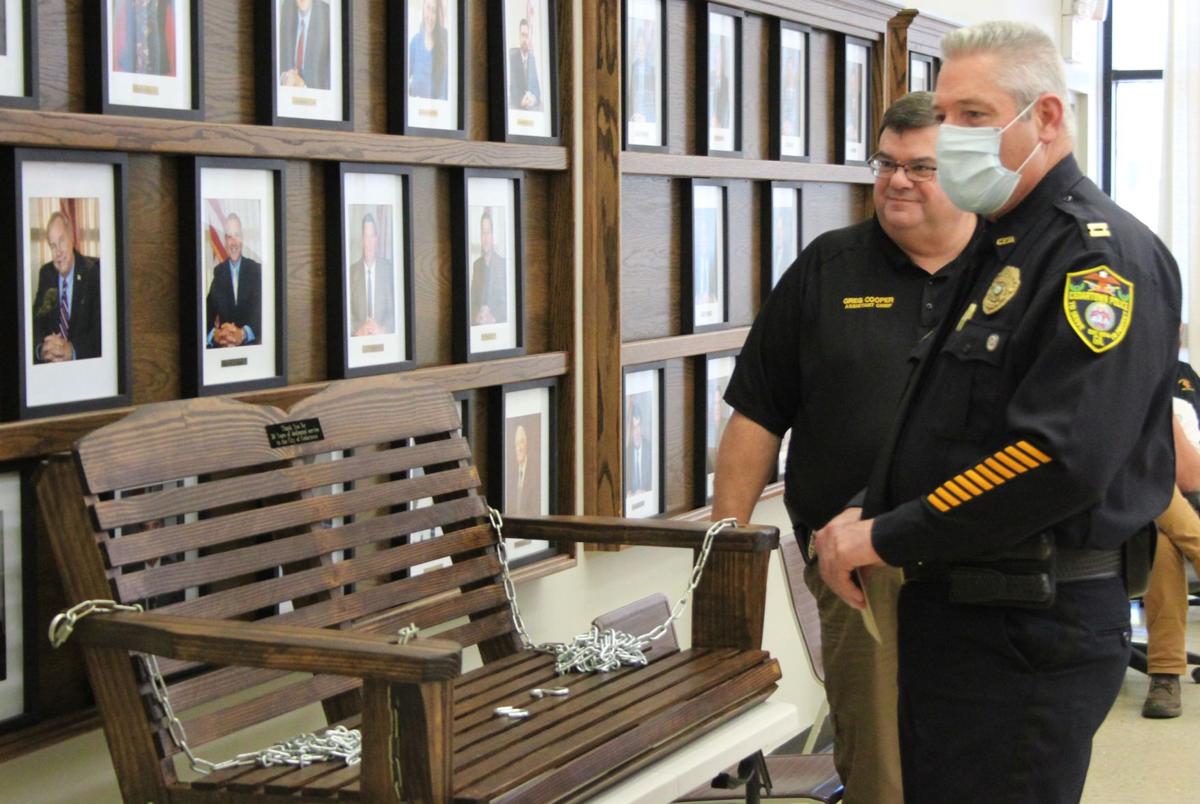 Cedartown police Capt. Henry Runyan (right) thanks Cedartown Chief Jamie Newsome (not pictured) and Assistant Chief Greg Cooper after being presented with a handmade wooden swing in honor of his retirement during the meeting of the Cedartown City Commission on Monday, July 13. 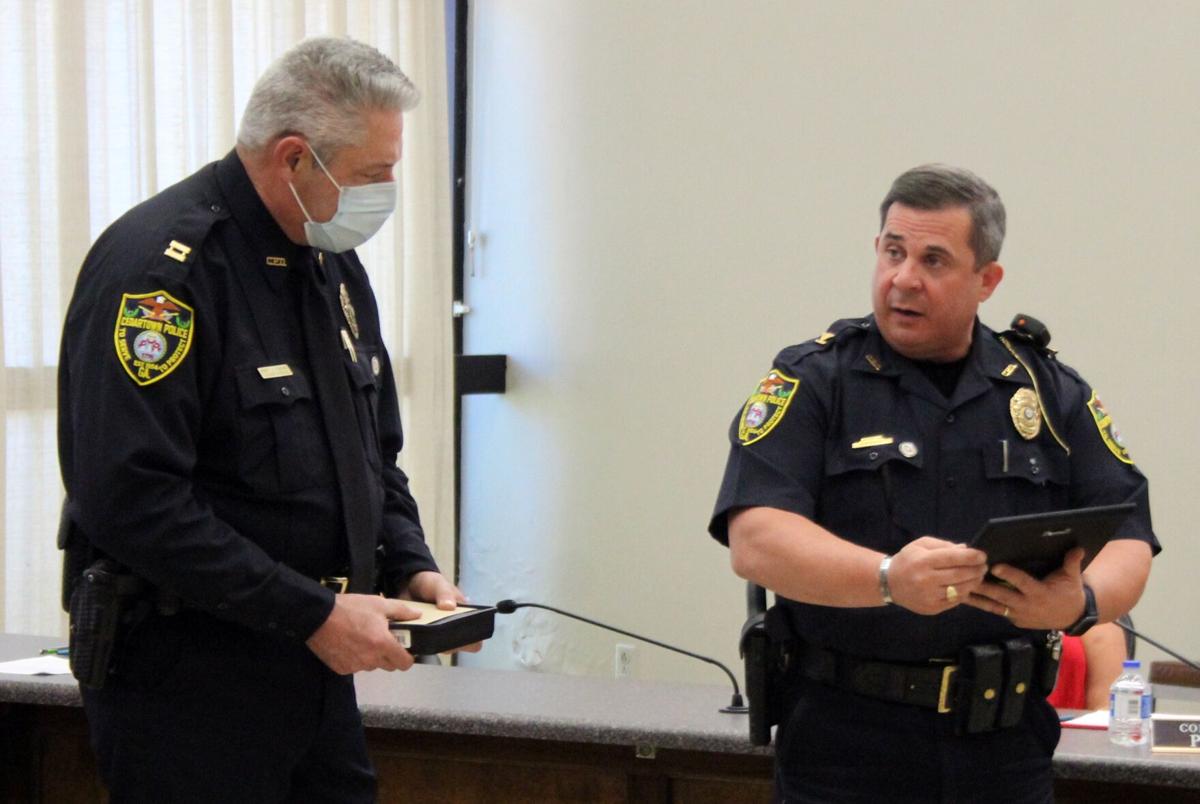 Cedartown Police Chief Jamie Newsome (right) reads a plaque featuring the badge of Capt. Henry Runyan while honoring the retiring officer during the meeting of the Cedartown City Commission on July 13. 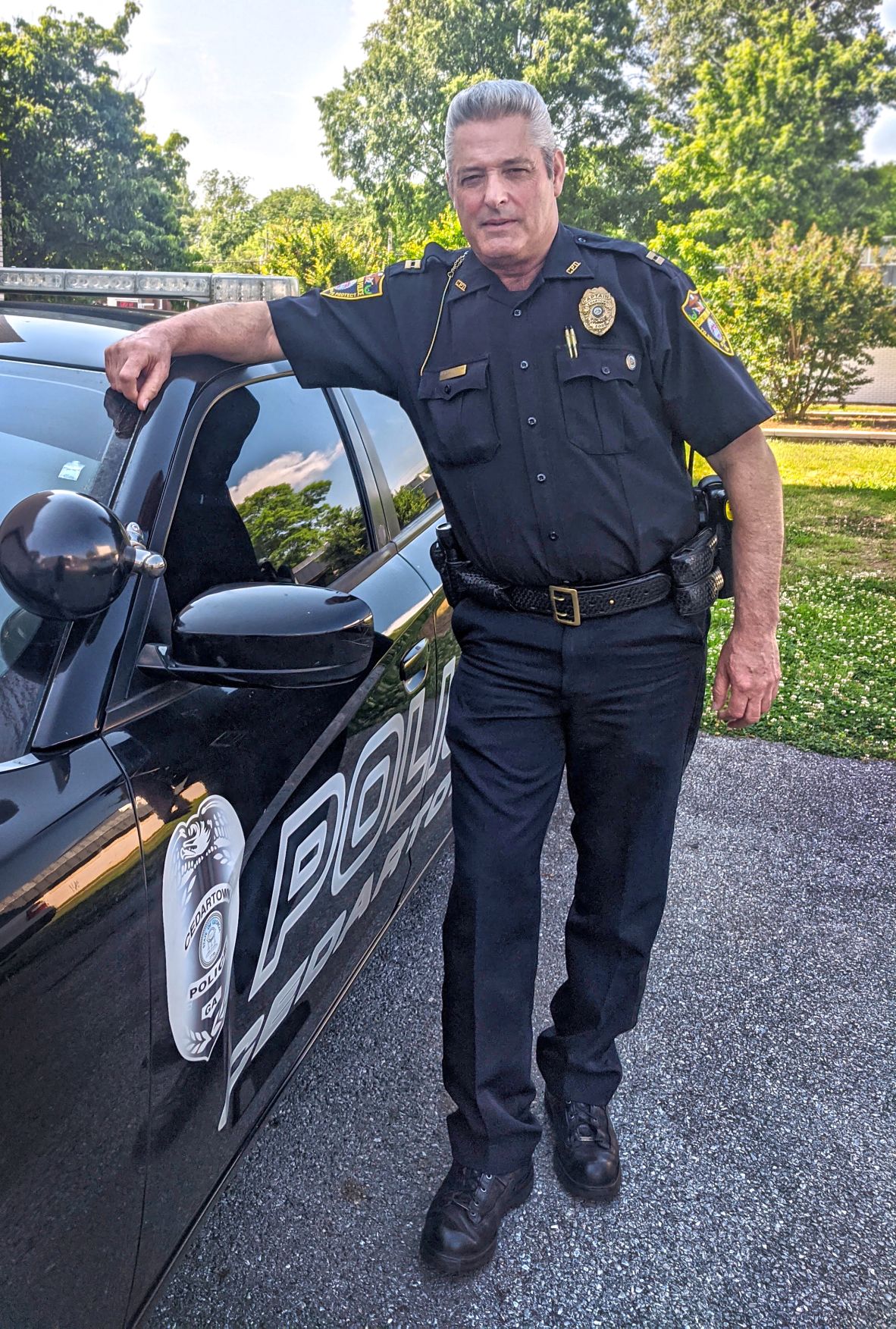 Capt. Henry Runyan has served under four different Cedartown Police chiefs during a career spanning three decades. He will officially retire from the department at the end of the month.

Cedartown police Capt. Henry Runyan (right) thanks Cedartown Chief Jamie Newsome (not pictured) and Assistant Chief Greg Cooper after being presented with a handmade wooden swing in honor of his retirement during the meeting of the Cedartown City Commission on Monday, July 13.

Cedartown Police Chief Jamie Newsome (right) reads a plaque featuring the badge of Capt. Henry Runyan while honoring the retiring officer during the meeting of the Cedartown City Commission on July 13.

Capt. Henry Runyan has served under four different Cedartown Police chiefs during a career spanning three decades. He will officially retire from the department at the end of the month.

For Capt. Henry Runyan, community policing can be summarized in one word — helping.

“When I go out on a call, I think to myself, someone’s got a problem, maybe I can help,” explained the 30-year veteran of the Cedartown Police Department.

His way of thinking has earned him the respect of many in the community, as well as admiration from his fellow officers. Runyan’s dedication to the job and his devotion to service above self makes his pending retirement a huge loss to the CPD family and Cedartown as a whole.

“Captain Runyan is the epitome of a true street cop who cares about his community,” City Manager Bill Fann said. “We will miss his smiling face and positive attitude.”

Runyan was honored for his dedication and service to the community during the July meeting of the Cedartown City Commission on July 13. City Commissioner Dale Tuck spoke about his demeanor.

“When Henry Runyan walks in a room, you feel comfort,” Tuck said. “He is the epitome of what the city of Cedartown produces. He raises the bar.”

Runyan has gone from being the youngest officer on the roster to the oldest, or “most experienced” officer on the force. He stepped into his career in law enforcement by happenstance.

“I was working as a salesman at Bruner Oil Company. I worked with a lady who was a relative of the current police chief and she mentioned that there was a job opening with the department. I put my name in, was hired and here I sit,” Runyan said matter-of-factly.

He was hired in the early 1990s. Back then, he explained, equipment was far and few between. Officers supplied their own gun and, according to Runyan, the one he managed to procure was “older than he was.”

Times have changed, and the difference in equipment now versus 30 years ago is like night and day. Though toting a gun comes with the job, Runyan’s equipment of choice during his years of service is one that housed no bullets.

“Mediation is the best thing you’ve got as an officer. Of course, you have to be a people person for that, you can’t talk down to people, you’ve got to listen and you’ve got to be able to handle people that get mad, people that say things that aren’t nice. If you can’t take that, then you don’t need to be a police officer,” Runyan said. “Many times, you can mediate a situation and not have to make an arrest.”

With three decades of policing under his duty belt, Runyan has seen a lot. He’s quick to point out that his moments of lending a hand to someone in need are the memories he will treasure the most.

“I remember there was a couple in town that needed gas money. I just happened to have $20 and I gave it to them and they went on their way. Sometime later, I was in Rome doing some shopping and a man approached me and said, ‘you were the officer that gave us gas money’ and made me take $20 back.”

Another highlight of his career came in 1996, when the Olympic swim team came to Cedartown to train in the city’s pool.

“I had the honor of escorting them from the pool to Cow Bell Farm, where they were staying while in town,” he recalled. “I also remember being downtown when the Olympic torch came through. Someone gave me a commemorative lapel pin while I was directing traffic.”

Newsome and Assistant Chief Greg Cooper presented Runyan with a handmade wooden swing at the commission meeting with a plaque attached to the back thanking him for his years of dedication to the city.

“I’ve had the privilege of working with many outstanding people over the years, but Henry is among the best of the best,” Newsome stated. “He excels in the qualities that can’t be taught through training — honor, integrity, ethics, and most especially love for others. He will be sorely missed.”

Runyan takes pride in being a part of those administrations and in leaving Cedartown a better place.

“I was part of Operation Street Sweep that rid the city of corner drug dealers. We were very aggressive during that operation. I learned a lot during that time,” Runyan said. “I know I wouldn’t be the same person I am today had I worked anywhere else other than the Cedartown Police Department. I am grateful for those that helped me along the way and gave me the advice of ‘youngun, learn all you can.’”

With his policing days coming to an end — his last official day is July 31 — he is excited for a change of pace.

“Being on my own schedule, being able to do things I couldn’t do before due to work, that’s what I am looking forward to,” said Runyan, who has stepsons and grandchildren that range in age from 25 to 2 years.

Runyan sits back in his chair and takes a moment to reflect on his long career.

“Just the opportunity to help people, I am going to really miss that. But I can still help people even after I retire because of what I learned as my time spent as an officer.”

Postal Service warns states across US about mail voting