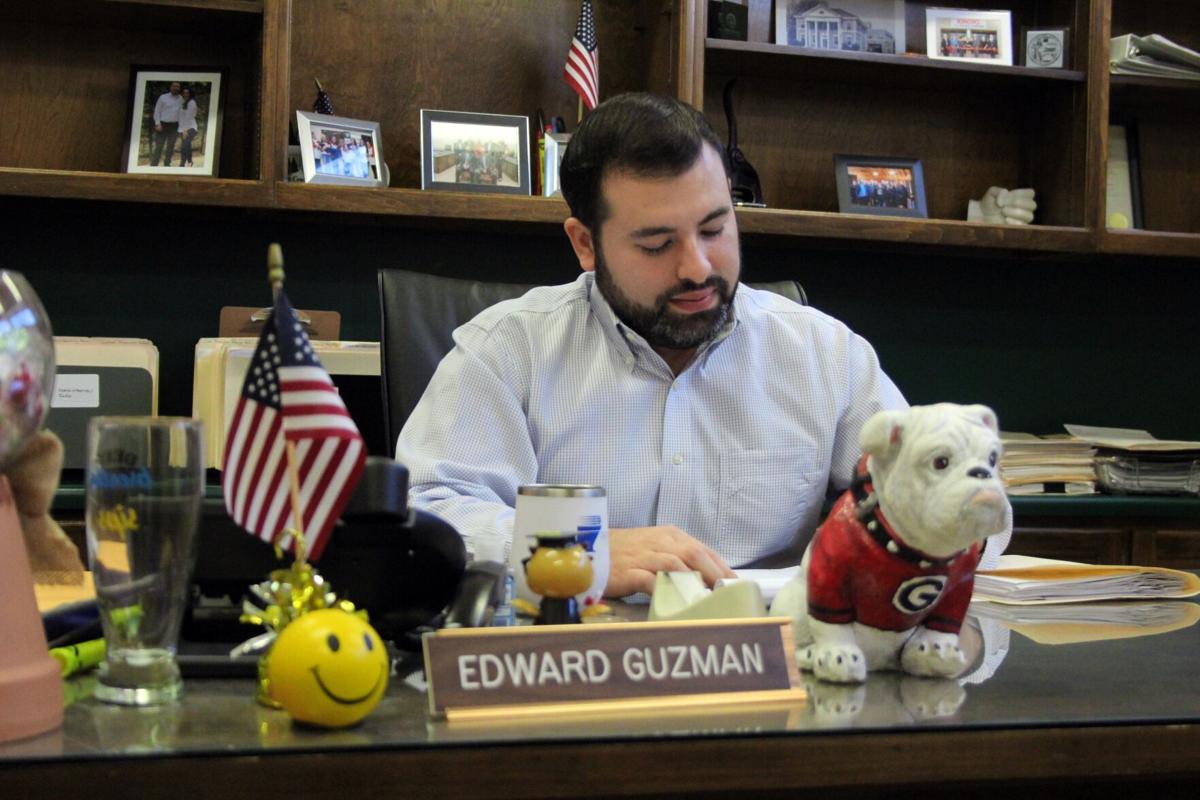 Edward Guzman began as Cedartown’s city manager on Oct. 1 after being unanimously approved by the city commission, continuing his time serving his hometown. 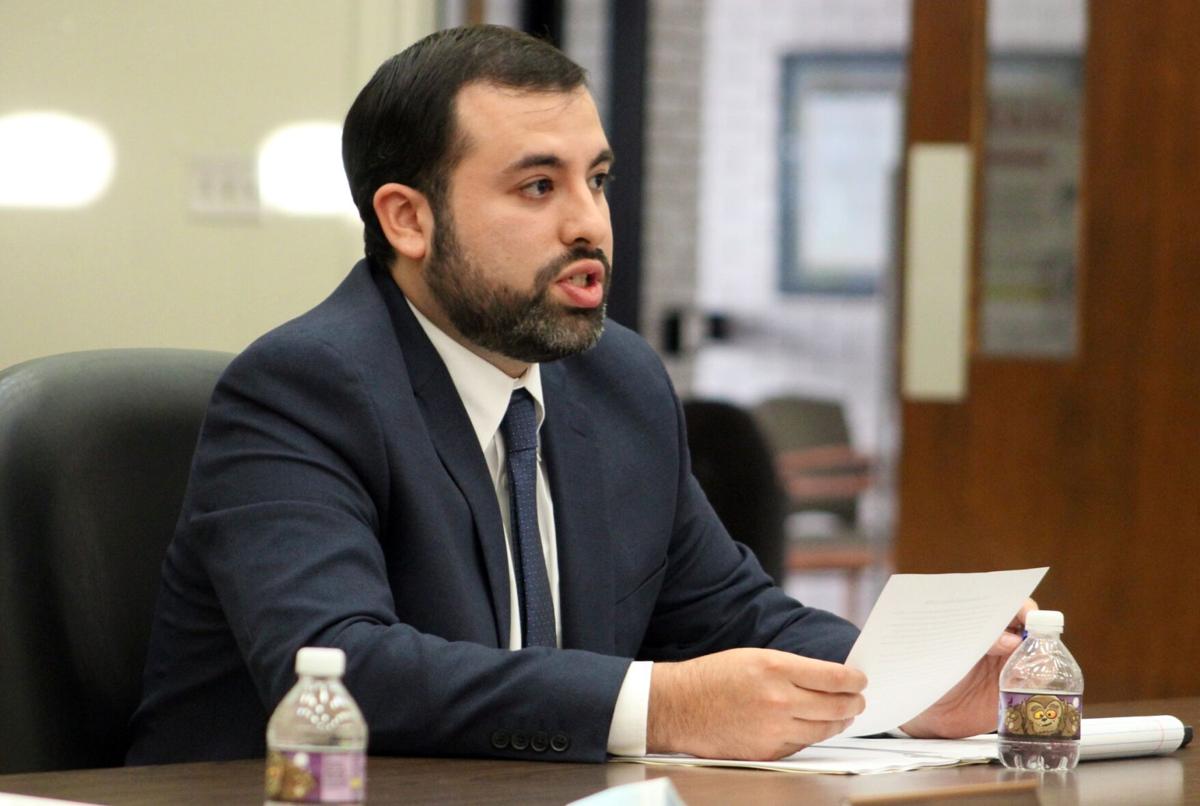 Cedartown City Manager Edward Guzman gives his first report to the city commission in his new role during the board’s Oct. 12 meeting.

Edward Guzman began as Cedartown’s city manager on Oct. 1 after being unanimously approved by the city commission, continuing his time serving his hometown.

Cedartown City Manager Edward Guzman gives his first report to the city commission in his new role during the board’s Oct. 12 meeting.

Edward Guzman had other plans, other paths that he had aspired to take.

But feeling compelled to stay in his hometown and help the residents and businesses he had grown up knowing, Guzman made the decision to stay on the path home.

That path has led him to not only become Cedartown’s new city manager, but it’s first Hispanic city manager, a distinction not lost on him as he winds up his first month in his new position.

“It is a massive honor. And I’m so thankful to the city commission for putting their faith in me,” Guzman said.

“My parents are immigrants. They came here from Mexico when my mother was pregnant with me. Seeing where they came from and how hard they worked to get where they’re at now. And then raising me the way they did. That is seriously the American dream. That’s what I love.”

Guzman, a first generation college student, went to the University of Georgia and majored in political science. After graduating, he came home to Cedartown and took some time to regroup before applying to law school.

In the meantime, he got a job as an office clerk for the city of Cedartown, handling business and alcohol licenses. He had planned to get some experience working for a government and save up some money.

“I always joke around with people and I tell them this — I honestly had no idea I was going to stay here,” Guzman said. “Obviously, from where I’m at right now, that definitely did not happen, and I’m thankful for that.”

It just so happened that the day Guzman started with the city — Sept. 21, 2011 — was also the first day for Bill Fann, who was hired to be the public works director after serving as a city administrator in Piedmont, Alabama.

“Even back then he was always willing to give advice and just kind of talk about what he’s done in his history. And just knowing what he did on a day-to-day basis, knowing what the government has to do to just keep services going in a community, I got more and more passionate as the years went by.”

Guzman began moving up through the city. He became assistant city clerk under former Cedartown City Clerk Carol Crawford, who just retired last year. Fann went on to be appointed city manager in September, 2012, and served in that capacity until his retirement last month.

“I got to see what she did on a daily basis, along with what Bill Fann was doing, and that passion for law school turned into a passion for wanting to continue to be involved especially here in Cedartown because this is my hometown,” Guzman said.

Guzman was named assistant city manager in June, 2018, and continued to learn under Fann and in the classroom, earning a master’s degree in public administration from Kennesaw State University.

Guzman said 2020 was supposed to have been the year for both him and Fann to have taken the time to go through each city department and determine a good plan for the next five or 10 years.

Then the new coronavirus did what it has done in nearly every facet of life across the planet.

“We were out there trying to decipher what we needed to do to not just protect the public but also protect our people that worked for the city,” Guzman said. “Protecting our employees and also making sure that the public understands and is aware of what was going on with COVID. it’s not over yet. It’s still going on.”

As he begins as city manager, Guzman wants to make sure he continues the fiscally responsible approach that the city’s management has adopted in the last decade and helped pull the city out of financial trouble and develop a fund balance that seemed unfeasible in the days after the Great Recession in 2008.

“They got a plan together, and we still have that plan in place. We are as responsible as we can be with not just local tax dollars, but also any federal and state funds that may come down to the city, because that’s important.”

Those funds have helped improve or expand the city’s infrastructure, both in neighborhoods and for economic development, like the Appalachian Regional Commission grant earmarked to help develop about 240 acres the city owns in the North Business Park off of the Cedartown Bypass.

But Guzman is mindful of the 110 full-time employees that the city has, as well as part-time employees, that he is responsible for and who continue to maintain the services and departments that residents rely on every day.

“This governmental entity … it is successful because of all the employees that work in every one of these departments. No one person is going to change the world, change the city. It’s a big team effort, and everybody’s involved in that team effort. It doesn’t matter what department they’re in,” Guzman said.

“Having the nine years that I’ve had here, I’ve had the opportunity to, little by little, get settled in before I even got to this position. I really do feel like I’ve got a head start and I’m so thankful for that. Because I know the department heads. I’ve worked with them for years now. Our business partners, our residents, our industrial partners, our school district. And so I am thankful for that, and it’s why I stuck around my hometown.”

The Latest: Raimondo says she's not set to be HHS secretary

Senate confirms Christopher Waller to serve on Fed's board

Trump honors football coach Holtz as 'one of the greatest'