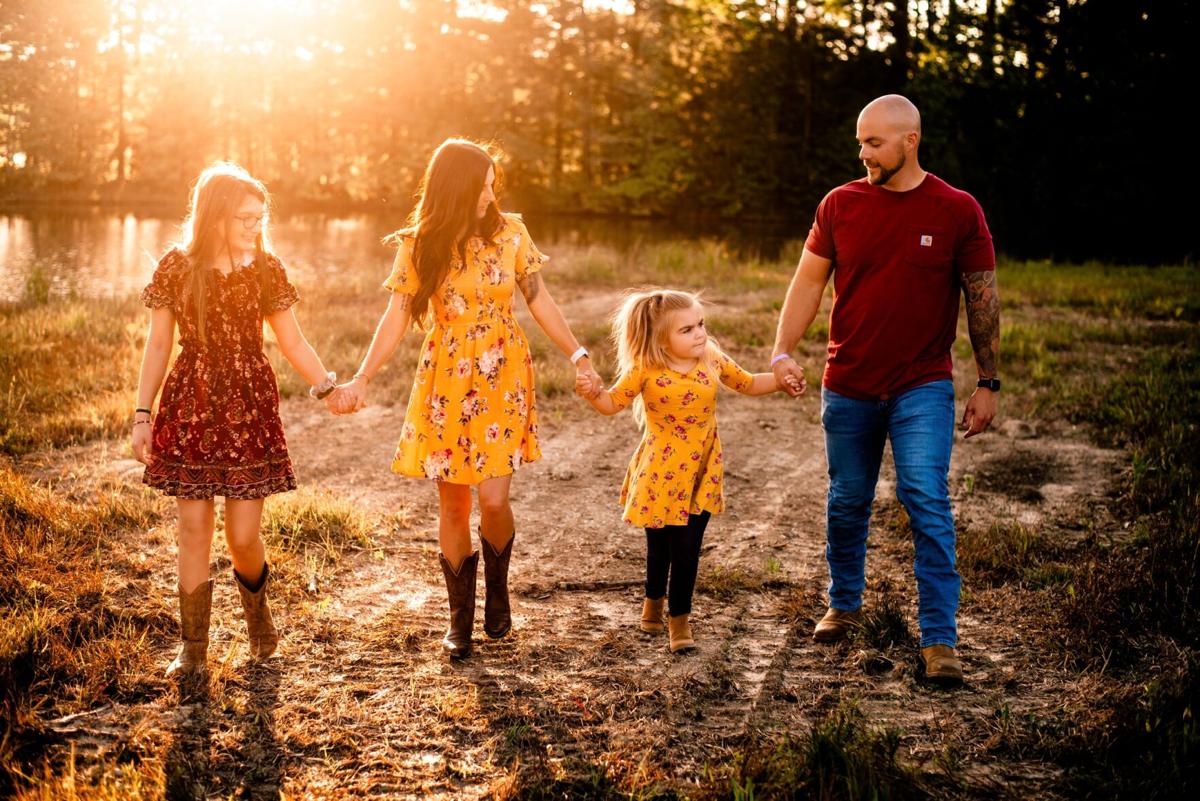 Haidyn Fowler (second from right) walk with her father Caleb (right), mother Carrie (second from left) and stepsister Braelynne. Haidyn was diagnosed in March with Sanfilippo Syndrome, a rare genetic disorder that affects her brain and nervous system. 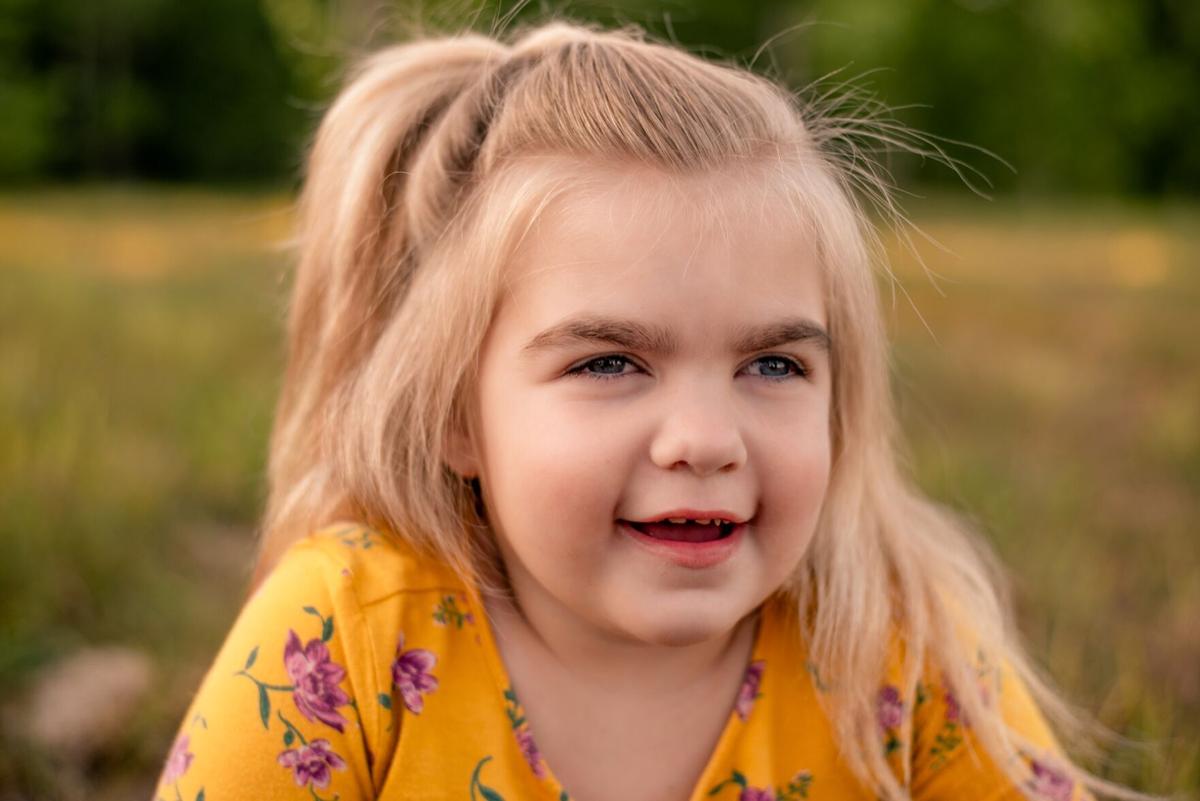 Haiden Fowler has continued to be a bright presence in her family’s life despite dealing with the effects of Sanfilippo Syndrome.

Haidyn Fowler (second from right) walk with her father Caleb (right), mother Carrie (second from left) and stepsister Braelynne. Haidyn was diagnosed in March with Sanfilippo Syndrome, a rare genetic disorder that affects her brain and nervous system.

Haiden Fowler has continued to be a bright presence in her family’s life despite dealing with the effects of Sanfilippo Syndrome.

Carrie Fowler and her family can regularly see skydivers from their rural Cedartown home gliding down from the sky with parachutes.

She used to watch them often and think, “I’ll never do that.”

But then her biggest fear was replaced in March when her 5-year-old daughter Haidyn was diagnosed with a rare and aggressive genetic disease called Sanfilippo Syndrome.

Now Carrie is getting ready to take on one of her longest phobias and skydive this Saturday along with friends and family — including her husband, Caleb — to help raise awareness of the debilitating disease and show her daughter that people can overcome what they fear.

“My husband knows how scared I am of heights,” Carrie Fowler said, mentioning moments when flying or even driving through the mountains. “But I told him now I’m more scared of my daughter having a disease that will likely take her by her teenage years that has no cure.”

Sanfilippo Syndrome is a degenerative disease that has been compared to Alzheimer’s but for children. It affects the brain and nervous system with no treatment options currently.

Haidyn will slowly lose her ability to speak, walk, and eat over the next few years, but they continue to make her life as happy as possible. Fowler said from what her family has learned about Sanfilippo Syndrome they understand Haidyn is in a lot of pain but she can’t communicate it to them very well. She shows signs of getting tired easier and not being able to talk as much as she once could.

“But she is one of the happiest kids overall. She laughs at things that we might not think are quite as funny, and of course that makes us laugh,” Fowler said. “Our motto is if she can be this happy when she has every right to cry with pain, then we can be the light for her during this struggle.

“All we want her to know is happiness.”

Haidyn and her family moved to Cedartown just over a year ago. At the time she had been diagnosed with severe autism for about eight months and had been seeing speech, physical and occupational therapists.

After about a year of Haidyn going to therapy, her mother could see that she was not improving at the same rate as other children with autism that she knew.

“So my mom instincts kicked in and I begged Haidyn’s pediatrician for a referral to a geneticist,” Fowler said.

After their first visit, Fowler left with some paperwork that listed what they would be testing Haidyn for and what the diagnoses could be.

“I’m a researcher, I like to know what I’m up against,” Fowler said. “So I came home and started Googling things until I came to the diagnostics for Sanfilippo Syndrome. That’s when I knew.”

It was Haidyn’s prominent features, such as her thick eyebrows and hair, that seemed to point towards the rare disease. It took a few weeks for the blood work to come back, and that’s when they got the official diagnosis.

Fowler has a 12-year-old daughter, Braelynne, who has taken an initiative to research Sanfilippo Syndrome on her own to understand what Haidyn is going through. She also helps look after her around the house.

“She’s just a great big sister and has taken her time with Haidyn,” Fowler said. “You would understand in some way how a sibling could feel jealousy because Haidyn has become the priority in our lives, but Braelynne has been understanding through all of it.”

While researching Haidyn’s condition, Fowler found a Facebook group that has helped her connect with parents of children with Sanfilippo Syndrome from all over the world. She said they have not only educated her but also been a means of support during difficult times.

Through them she discovered the Cure Sanfilippo Foundation, which raises funds for research to help develop treatment and, ultimately, a cure. It’s that organization that Fowler is helping raise money with her skydive this week.

She and her husband are working with Skydive Georgia, which is based at the Polk County Airport-Cornelius Moore Field. She said they have had a lot of her husband’s co-workers, along with other friends and family, volunteer to jump with them. They also have heard from some people they don’t even know who want to jump after reading about it on Facebook.

“How cool would it be to have a day of skydiving for Haidyn,” Fowler said.

Fowler’s fundraising page can be found by visiting https://give.curesanfilippofoundation.org/fundraiser/2799911. Donations can also be made through Haidyn’s Facebook page at facebook.com/HaidynsHope.

For pandemic jobless, the only real certainty is uncertainty

10 most vulnerable House members in 2020

Two women run down outside of Johns Creek bar