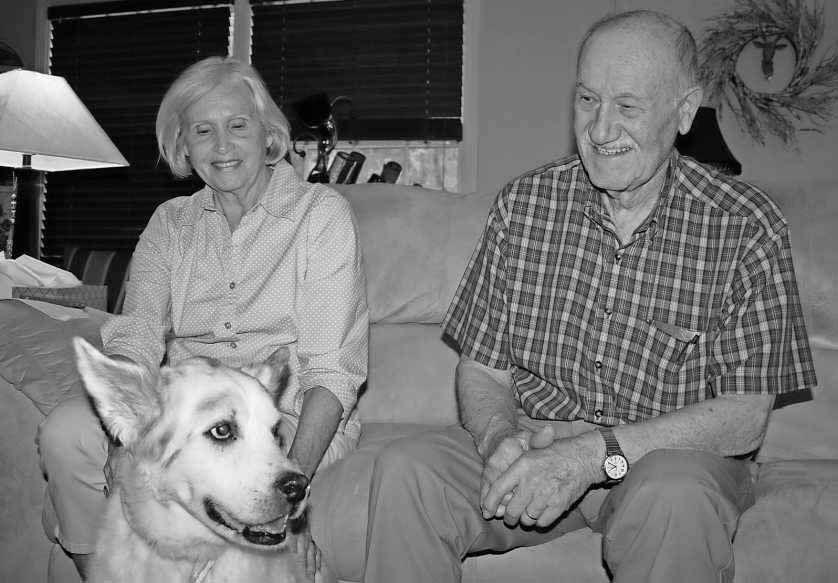 Pat and Wayne Niederhuth of Rome enjoy a moment with their rescue dog Happy in their living room.

Sammy is a 7-year-old pure-bred long-haired Chihuahua. Tish and Fred Redwine bought her when she was 6 weeks old.

One of Misfit Haven Animal Rescue's eligible adoptees pokes his nose through the gate of their enclosure.

Pat and Wayne Niederhuth of Rome enjoy a moment with their rescue dog Happy in their living room.

Sammy is a 7-year-old pure-bred long-haired Chihuahua. Tish and Fred Redwine bought her when she was 6 weeks old.

One of Misfit Haven Animal Rescue's eligible adoptees pokes his nose through the gate of their enclosure.

She and her husband Wayne Neiderhuth took Happy in after responding to a notice put out by her previous owners who, with a young child and another one on the way, couldn't give her the best care.

"(Her previous owners) went to the pound one day to look for a dog. They wanted a puppy, and they were looking at another dog, about to close in on the other one, and she had a yellow sticker on her kennel," Pat said. "They asked about it, and they said, 'That was her last day,' so they said, 'We'll take her!"'

Though Pat and Wayne are older, they both said Happy has been the perfect company.

They've had Happy for five years. Now that she's getting older, Happy's hips have been acting up on her. Pat said their neighbors were worried about Happy after hip surgery when they didn't see her outside for a while.

They have a special modified step stool that Happy uses to get into the back of their van.

Pat and Happy spend evenings curled up in front of the couch watching TV. It's their "usual position," Wayne said.

Wayne and Pat know the benefits of pet ownership, but they want others to know the commitment before they buy or adopt.

"I think if people are physically able to do it, yes." Pat said. "A lot of older people do have pets, a lot of single men and single women do, who live by themselves, and they are a tremendous amount of company."

Seven-year-old Sammy, a feisty chihuahua, has been with Frank and Tish Redwine nearly since his birth.

"We've always had dachshunds, this is the first non-dachshund we've had," Frank Redwine said. "He fits in her lap a lot better than dachshunds did."

Tish Redwine wanted to make sure he was the right size, and drove all the way to Tuscaloosa to pick him up from the breeder.

"It took me a while to find him because I wanted one that was less than five pounds," she said. "He's nice because he doesn't require a lot of exercise. You can just walk him down five or six houses and that's enough for him.

"We do that at least twice a day, but bigger dogs require a lot more activity."

Smaller dogs might be something to consider for older potential pet owners, she said. Making preperations for the dog should you pass is also important, Frank Red-wine said.

In fact, after their last dachshund Minerva died, they began looking.

"We started searching right away because we don't like to be without one," he added.

They both also said to know what's involved in pet ownership before you commit.

"It is a responsibility too, and it might limit some of their activites," Tish said.

"And it can get to be expensive if they have a lot of medical problems," Tish Redwine added. "So you don't want to go into it lightly."

View from an animal rescue owner

Coming on six years and 4,000 adoptions, Nick Adams, founder and president of Misfit Haven Animal Rescue, 718 Kingston Ave., said that in just the past few months he has overseen four adoptions by older adopters, and he hopes to see more.

"She'd been in three different homes," Adams said. "This was a dog I would've homed with anybody that was older that had hip problems, knee problems, because I know this dog is not going to jump."

"Before I let him adopt, he said that he was unsure what his kids or his grandkids would say," Adams said. The man went and brought back his son who agreed they were a good match.

Adams first priority is always his dogs. He said he has negotiated fees and training options if adopters can offer a safe and permanent home.

"As long as the dog is taken care of, I'm okay," Adams said. "If you don't think that the dog is doing well after the gentlemen passes away or if there's no one there that can step up and take the dog, bring the dog back."

While he loves each and every one of his dogs — his pets and those he hopes to see adopted, his heart belongs to a 13-year-old beagle named Betsy.

Abandoned at Murray County Animal Control in the snow, Betsy the beagle soon gave birth to a litter of three. One was stillborn, one died after three weeks. When Adams took her to Misfit Haven, he said the security cameras would record her walking back and forth between the kennels, watching over any puppies who had come in.

As much as he loves her, he wants to see her in a permanent home.

"Betsy going to a home would probably be one of the best things in the world for me," Adams said. "Every day I come in here and I hope that there is somebody that I showed (who) got her like I did."

"I don't want the dog to be placed somewhere where she's going to come back and forth or be yelled at."

He knows what Betsy's been through and wants her to be happy. He also said he needs for her owners to understand that she sleeps a lot and waits to relieve herself when no one is looking.

"It's finding somebody that just wants a companion who'll lay there with you," Adams said. "And she may or may not have accidents. I don't want Betsy to go to a home unless it's understood that this is what happens and this is what she does."

Adams has many other dogs available for adoption and he gives special attention to every one.

"These are rescue dogs that are spayed and neutered and vaccinated at the time of adoption. These dogs are loved ... It's a lot of work, but it's a lot of passion."