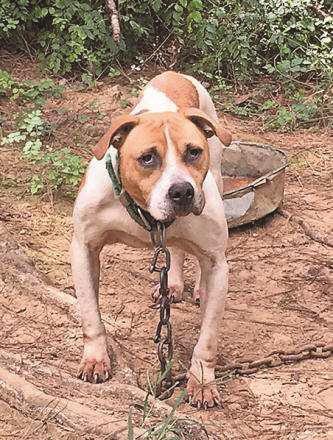 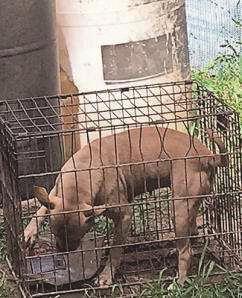 This is one of 35 more dogs found by Polk County police on Tuesday following the execution of a search warrant.

This is one of 35 more dogs found by Polk County police on Tuesday following the execution of a search warrant.

A second group of dogs was found in Polk County on Tuesday as dogs from a first larger group were all finding homes at surrounding area rescues and shelters.

Dodd said "we did take some into custody" but no charges have yet been filed as interviews were still ongoing as of press time.

As they did on the previous night, Polk County police officers stayed with the dogs found Tuesday until rescue organizations could be brought in to find them shelter space, since the Polk County Animal Control facility can't take them all at one time.

Some 39 of the 70 dogs have been taken in by a number of rescue groups after their discovery on the basis of a tip on Monday, according to Dodd. His hopes were that rescue groups would be able to take in all the dogs before the end of the day as of his last update. Police stayed with the dogs until they could be taken in, and by late Tuesday afternoon all of the dogs found Monday had at least temporary homes until adoption efforts can be undertaken. Dodd said he was still working on a full list of agencies that had thus far provided help in placing the dogs.

The same plan is being worked out for the dogs found at Puckett Road, with the hopes that additional rescue groups will be found to find homes for the dogs, mainly pitbull-based or bulldog-based breeds.

It brings the total to 105 dogs found in two days, and came with one arrest on Monday of Devecio Ranard Rowland, 32, of a Jones Ave nue address in Rockmart. He was officially charged later in the day with 70 counts of misdemeanor cruelty to animals.

He remained in jail today without bond, waiting for a Superior Court hearing on the matter.

District Attorney Jack Browning said he would be opposing any bond in the case, citing a previous charge against Rowland in the case. He added his office has already been involved in the case as well.

"On this case, our office was contacted by Polk County Police Department to come to the crime scene as the investigation began, to provide prosecution assistance and support to law enforcement investigators to ensure that, this time, justice is done for these poor defenseless dogs and the case against Mr. Rowland a solid one," Browning said.

Rowland was previously charged with possession of marijuana and a controlled substance, dog fighting and cruelty to animals in a 2010 case that was set to go to trial after others had plead guilty to charges they faced in relation with it.

In 2010 police raided the Cashtown Road address. It was a result of an investigation prompted by a tip in February to an Atlanta private investigation firm, Norred and Associates, who brought their evidence at the time to the Polk County Police Department.

Browning said the previous case against Rowland was set to make it to court in 2012 after he took office, but when a key witness in the case died they lost much of the evidence they planned to present at trial via testimony.

Probe: Top US official misused office to get son-in-law job

The Latest: Portugal eases restrictions after no virus spike