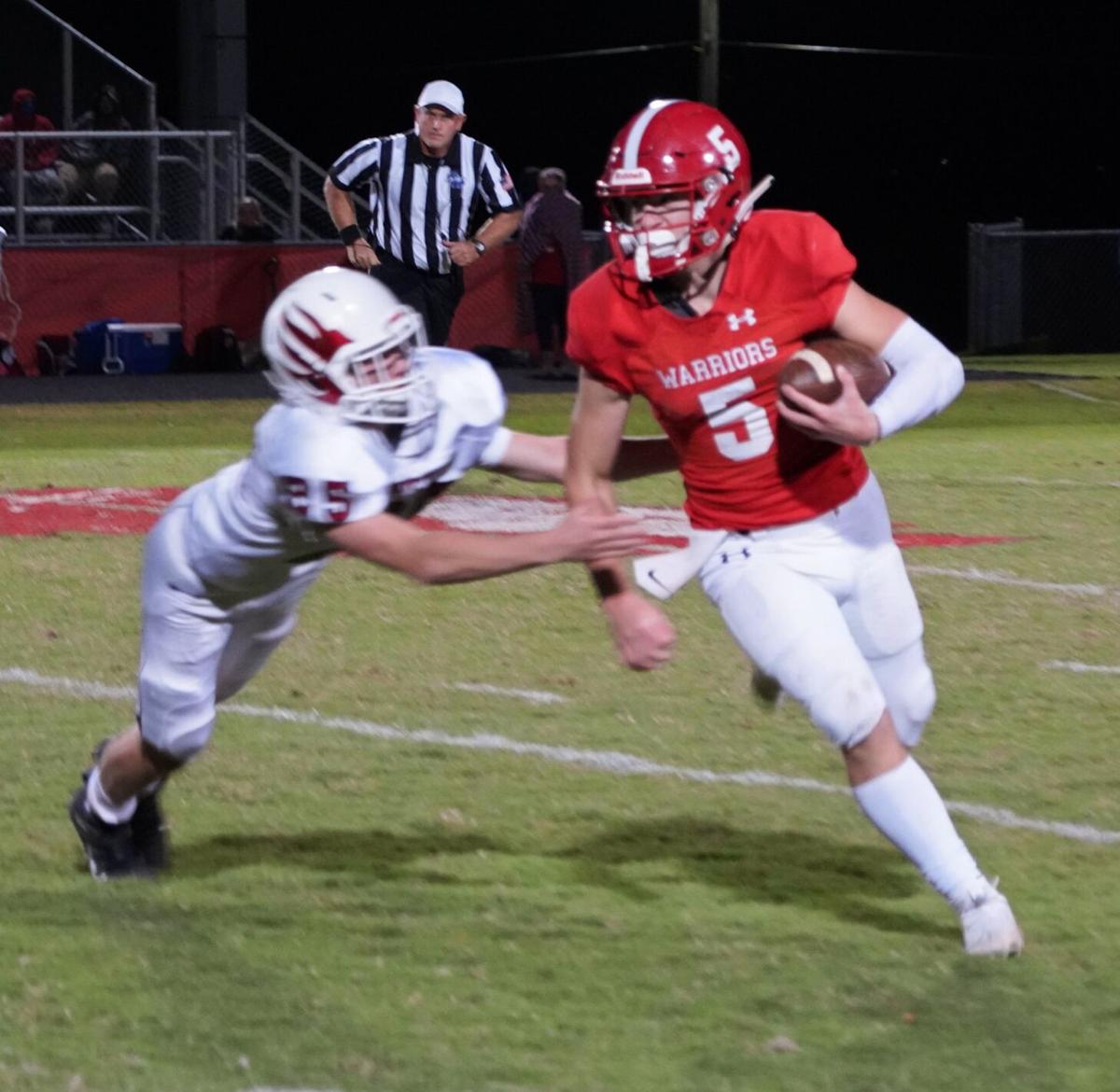 LFO quarterback Will Carroll tries to turn the corner against Sonoraville’s Wyatt Springfield during Friday’s game in Fort Oglethorpe. The Warriors had over 500 yards, with more than 450 on the ground, as they won a 44-37 shootout in a Region 6-AAA contest.

Toe meets leather as LFO’s Al Hastick gets his foot into a kickoff during Friday’s game against Sonoraville.

LFO quarterback Will Carroll tries to turn the corner against Sonoraville’s Wyatt Springfield during Friday’s game in Fort Oglethorpe. The Warriors had over 500 yards, with more than 450 on the ground, as they won a 44-37 shootout in a Region 6-AAA contest.

Toe meets leather as LFO’s Al Hastick gets his foot into a kickoff during Friday’s game against Sonoraville.

After four tough losses to start the season, and an extra week to stew about it, the LFO Warriors got their offense rolling in a big, big way on Friday night and knocked off Sonoraville, 44-37, in a Region 6-AAA battle at Tommy Cash Stadium.

The 508 yards rolled up by the Warriors included 456 on the ground, both season-highs, while the 44 points scored by LFO equaled the combined total that the Red-and-White had put up in their first four games of the season.

LFO (1-4, 1-2) scored on its first two possessions of the night to build a 14-0 lead. Quarterback Will Carroll ran one in from eight yards out and fullback Benji Valdes plowed in the endzone on 3-yard run.

Sonoraville (2-3, 0-3) would answer with their first touchdown of the night, set up by an LFO fumble. The Warriors responded with a 1-yard TD run by Malachi Powell make it 21-7, but the Phoenix scored again on their next possession to narrow the gap to 21-14 at intermission.

The visitors would tie the score at 21 apiece early in the third quarter, but a lengthy drive by the Warriors would result in Powell’s second 1-yard plunge of the game as they went ahead, 27-21.

Both teams exchanged field goals late in the third quarter. LFO’s came on the leg of Alec Gentry, whose 28-yarder kept the Warriors in front, 30-24. But on the very first play of the fourth quarter, the Phoenix found the endzone, while the PAT gave them their first lead of the night, 31-30.

Undaunted, the Warriors would chew up several minutes off the clock on another long touchdown drive, this one capped by Powell’s third 1-yard scoring dive of the evening. A two-point conversion attempt failed, but LFO was able to regain a 36-31 lead.

Sonoraville would answer again as quarterback Brady Lackey connected on his fourth touchdown pass of the night. However, the Phoenix would also fail on a two-point conversion try as they held a narrow 37-36 lead with just over four minutes to play.

However, that lead would too be short-lived as running back Jacob Brown, already with over 150 yards rushing to that point, broke loose for a 53-yard TD scamper as LFO took a seven-point lead late in the game.

The Warriors would ice it moments later as Sonoraville fumbled the ensuing kickoff. LFO would drive deep into Phoenix territory before taking a knee to run out the clock.

Brown finished with 18 carries for 201 yards. Carroll picked up 127 yards on 24 rushes, while Jevonnie Womble gave the Warriors three runners with over a 100 yards as he picked up 110 on 12 carries.

Carroll also completed 4 of 6 passes for 52 yards. Valdes had a team-best 37 yards on two receptions, while LFO was a sparkling 9 of 10 on third down.

The Warriors will play the first of two consecutive road games this Friday night when they make the long drive to Rockmart to take on the region frontrunner. The Jackets took over first place in the 6-AAA standings this past Friday with a 49-42 win over North Murray.