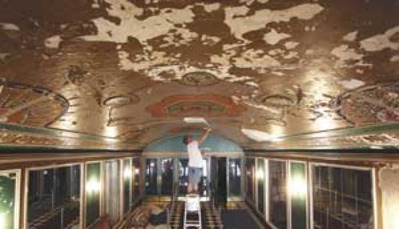 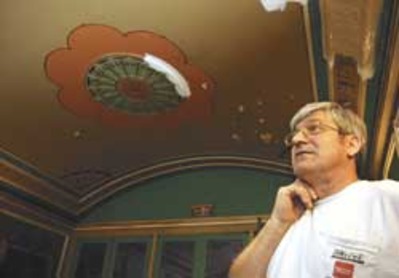 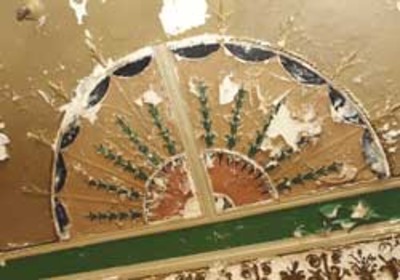 The historic DeSoto Theater will undergo a revitalization program announced by the Fox Theatre Institute.

The DeSoto and 14 other sites were selected out of 260 historical theaters to participate in the first-ever restoration and theater revitalization program.

Were really honored we would be selected and to be one of the 15, said Paul Griffin, Rome Little Theatre president.

Immediate advice and funds are part of the partnership, along with preserving the integrity of Romes 80-year-old DeSoto. At this time, the money allotted and resources are unknown.

Independent of the partnership, local resident Charles Goulding, who specializes in ornate and decorative plastering, is working as a one-man team, creating molds and fixtures for the entryway ceiling.

He is applying a polymer rubber, scurrying up a ladder with a paintbrush to set the molds for the arcade. Once his decorative work dries, the Atlanta-area team will come in and paint the remainder of the entrance hall.

I get pleasure out of it because people appreciate the

work I do, he said. The ceiling is worth saving.

Goulding estimates the Fox Theatre crew can come in and paint in three to four weeks.

The DeSoto Theater, which opened in 1929, was the first movie palace equipped with talkies for motion pictures  most other theaters around that time were adapted.

It boasts Adams-style architecture, a reflection of colonial times and an ornate arcade with colorful Greco-Roman medallions stretching across the arched ceiling of the arcade hall.

Roman Chip Tilly, 35, who began at age 10 collecting artifacts on the DeSotos history, has independently taken up the role of theater historian on a volunteer basis. He has compiled a scrapbook containing compelling and lost details of the theaters past.

The DeSoto has such a long history, spanning over three generations, said Tilly. The sound equipment in 1927 was the same as they used in the Roxy in New York City, and even the seats were duplicated from there.

The production of Cats is an example of the theaters innovative design to produce a Broadway show on a smaller sized venue, said Tilly. We try and take what we have and always make the best out of it.

Much work and money is still needed to preserve the theater.

In the past, because people dont see the immediate changes, they arent convinced something is happening, said Griffin. Around $40,000 was spent on heating and air conditioning, and other funds have gone into roof repair over the arcade entrance hall.

But with the Atlanta-based partnership, the community will see visible changes that will help bring people inside the DeSoto.

A Brief Timeline of the DeSoto Theater

with some interesting facts ...

*According to Chip Tilly, O.C. Lam and his brother traveled all across the U.S. for six to eight months before selecting their theater equipment and seating.

*According to Tilly, this is not the original marquee, and other theater locations around Broad Street made similar changes around the same time.

Victorian home next to Napa's Fuller Park to get new owner

OPINION: Americans get taken to the woodshed by lumber costs