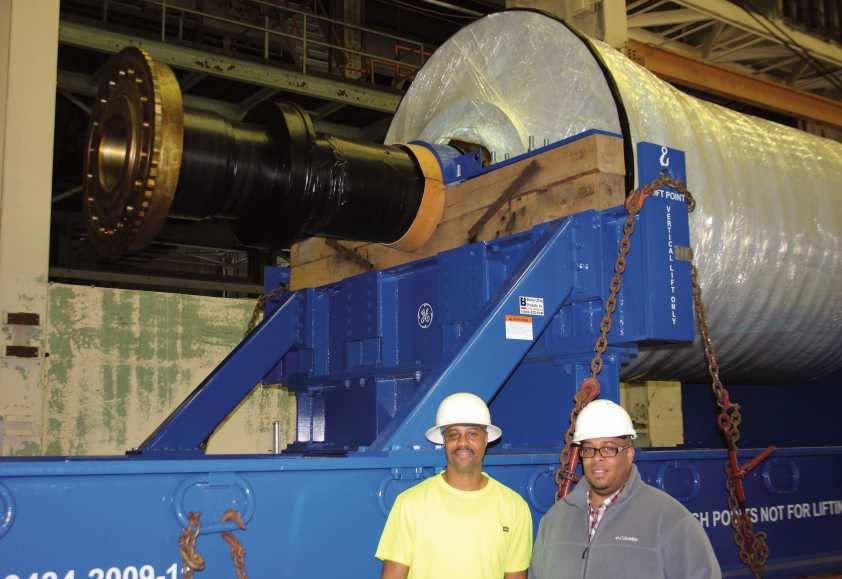 Twyman Gilbert (left) who will be driving the megaload from Rome to Atlanta, stands with Shannon Barber, GE logistics and planning leader, in front of the 200-ton turbine that is ultimately destined for Argentina. 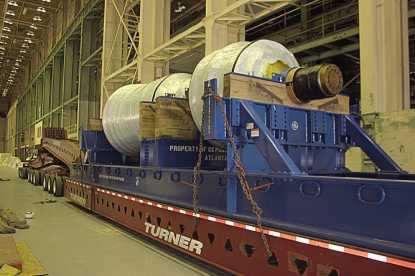 The load is set to leave Rome Friday night around 10 p.m.

Twyman Gilbert (left) who will be driving the megaload from Rome to Atlanta, stands with Shannon Barber, GE logistics and planning leader, in front of the 200-ton turbine that is ultimately destined for Argentina.

The load is set to leave Rome Friday night around 10 p.m.

Traffic in Rome on a Friday can be challenging so logistics personnel from the General Electric plant in West Rome will wait until 10 p.m. to start another 200-ton megaload.

A mammoth power turbine is slated to be moved from the facility, through Adairsville, to Harts-field-Jackson International Airport on Friday night and Saturday morning.

Its ultimate destination is Argentina.

The GE power services division is now using a 33,000-square-foot bay in the former medium transformer plant on Redmond Circle as a warehouse and staging center.

It is being carried on a trailer that is a little more than 200 feet long, 12 feet wide and 15 feet high — the length of about three large semi trucks.

Hauling 200 tons down the highway is almost old hat for Twyman Gilbert, a veteran transportation engineer from Charlotte, North Carolina. Dealing with traffic is the most challenging part of the job for Gilbert.

"People are not used to seeing something like this going down the road," Gilbert said. "They ride beside you and admire what's going on but they don't realize they are drifting into you."

People who cut in front of the rig on the highway are also a pain for Gilbert, who said braking a tractor-trailer that size is no small task.

Gilbert has been driving megaloads for the past 16 years.

"It's very stressful, but if you've got people working together you get a plan," he said. "Usually, if everybody sticks to the plan it goes fairly smoothly."

Shannon Barber, the GE logistics and planning leader, said inspectors from the Georgia Department of Transportation will be at the facility today to inspect the load and its rigging.

The load is scheduled to leave Rome around 10 p.m. Friday, travel on Veterans Memorial Highway to Ga. 53 North. It will then cross Ga. 140 to 1-75 in Adairsville and head south.

Construction on 1-75 will force a detour in Cobb County. It will leave the highway at Wade Green Road and take George Busbee Parkway to Chastain Road, where it will get back on 1-75 to Exit 239, the Charles Grant Parkway, to the airport.

Transporting the power turbine to Argentina may be even more impressive, Barber said.

It will travel on a six-engine Ukrainian-built Antonov AN-225 cargo aircraft — the largest such aircraft in the world. The nose cone of the aircraft is tilted back so the turbine, lifted by a crane, can be slid into its belly.

Barber said that GE would be busy with shipments in and out of the facility for the remainder of the year.

Read this story online to see a Google map of the GE plant and to see images of the Antonov AN-225 cargo plane that will take the turbine to Argentina.

Olympic debut of women’s park skateboarding has a Japanese flavor

The Mets are struggling. Blame the failure to add more pitching.

Analysis: Don’t want a vaccine? Be prepared to pay more for insurance