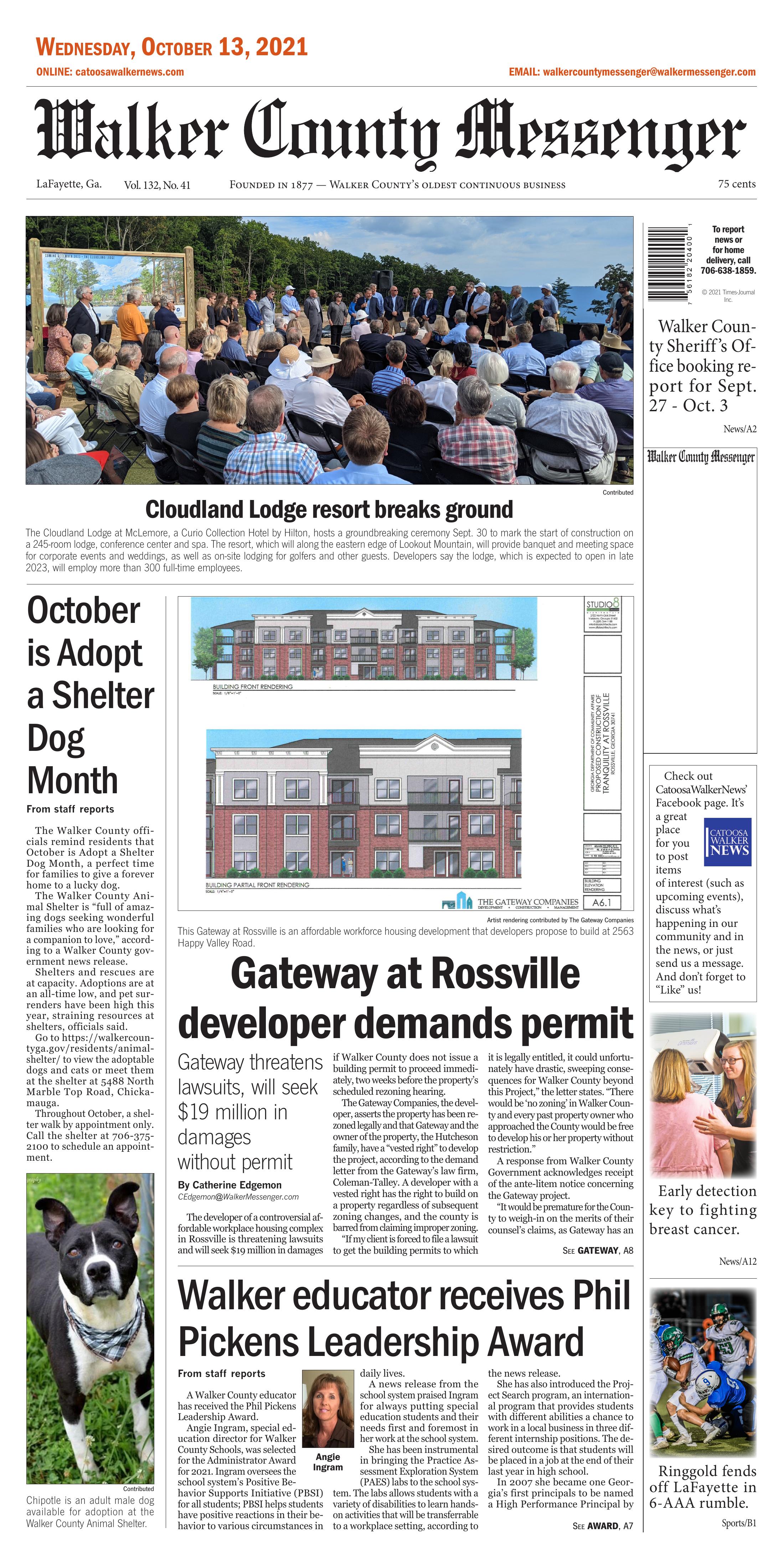 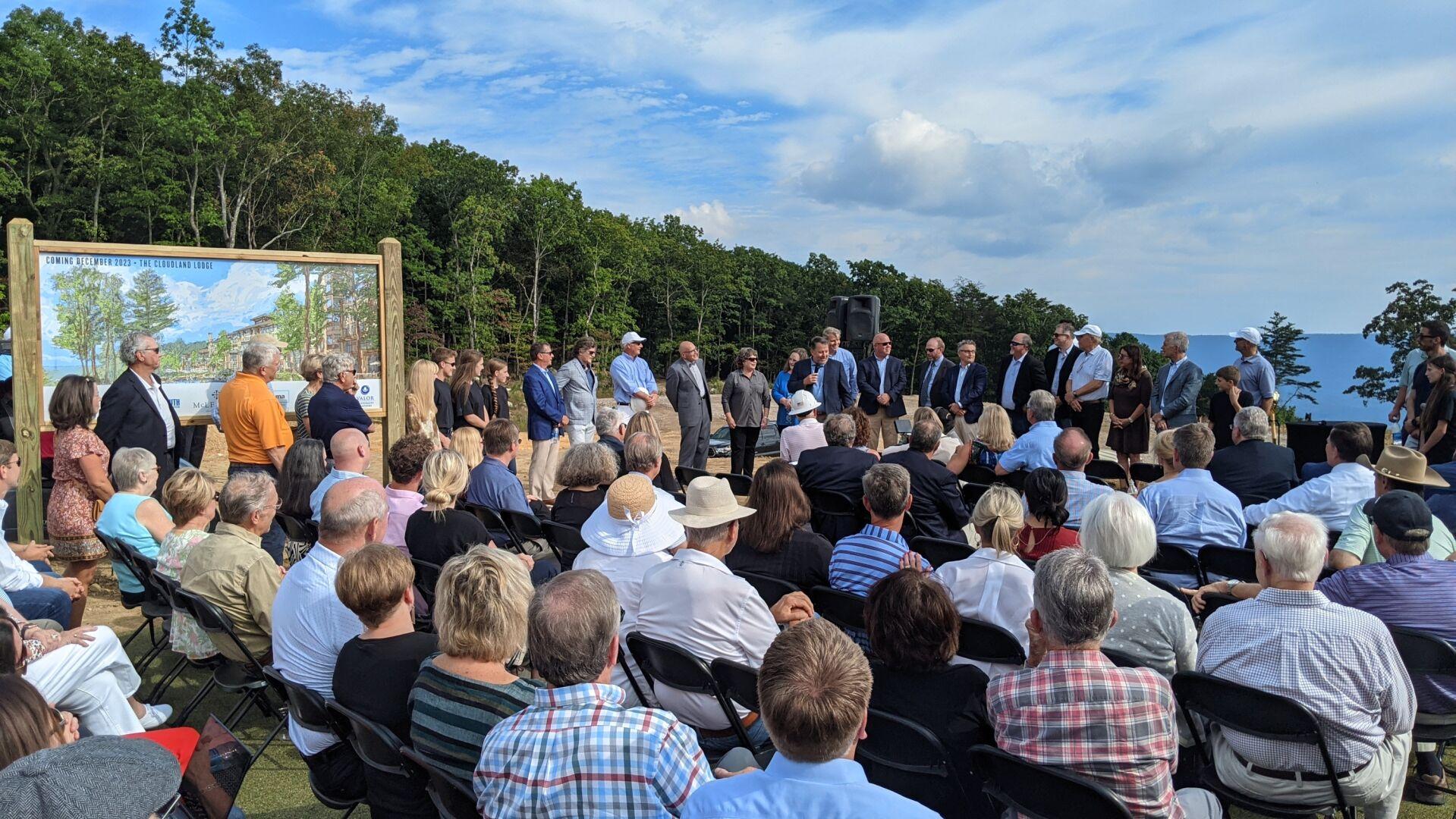 The Cloudland Lodge at McLemore, a Curio Collection Hotel by Hilton, hosts a groundbreaking ceremony Sept. 30 to mark the start of construction on a 245-room lodge, conference center and spa. The resort, which will along the eastern edge of Lookout Mountain, will provide banquet and meeting space for corporate events and weddings, as well as on-site lodging for golfers and other guests. Developers say the lodge, which is expected to open in late 2023, will employ more than 300 full-time employees.

The developer of a controversial affordable workplace housing complex in Rossville is threatening lawsuits and will seek $19 million in damages if Walker County does not issue a building permit to proceed immediately, two weeks before the property’s scheduled rezoning hearing.

The Gateway Companies, the developer, asserts the property has been rezoned legally and that Gateway and the owner of the property, the Hutcheson family, have a “vested right” to develop the project, according to the demand letter from the Gateway’s law firm, Coleman-Talley. A developer with a vested right has the right to build on a property regardless of subsequent zoning changes, and the county is barred from claiming improper zoning.

“If my client is forced to file a lawsuit to get the building permits to which it is legally entitled, it could unfortunately have drastic, sweeping consequences for Walker County beyond this Project,” the letter states. “There would be ‘no zoning’ in Walker County and every past property owner who approached the County would be free to develop his or her property without restriction.”

A response from Walker County Government acknowledges receipt of the ante-litem notice concerning the Gateway project.

“It would be premature for the County to weigh-in on the merits of their counsel’s claims, as Gateway has an active zoning request to be decided by the Board of Commissioners on October 14,” the county’s letter states.

The letter is dated Sept. 29, one week after the Walker County Messenger reported that former sole commissioner Shannon Whitfield, now chairman of the Board of Commissioners, notified the developer that the property was zoned residential two weeks before he rezoned it in the commissioner’s meeting to allow construction of 156 units of affordable workforce housing.

The demand letter is a marked change in tone towards the community since Josh Mandell, president and chief operating officer at The Gateway Companies, spoke Sept. 13 at a public information meeting and then appeared with Whitfield on Judy O’Neal’s “Night Talk” program on UCTV to discuss the project.

“We believe this was a valid rezoning, and we think this was done properly, but we also think if we are going to play the long game here, we ought to do this in a way that is the most open and friendly and best-foot-forward way to be in a community that we want to be in for a long time,” Mandell said when asked about repeating the rezone process.

Two weeks later the company’s demand letter states the county would violate the Fair Housing Act and Gateway’s due process and equal protections, and Gateway is preparing for “no less than four lawsuits” against the county, of which two would be in the Northern District federal court. Because Walker County does not have a valid zoning map or a valid land development ordinance, the letter says, Gateway “is entitled to a building permit as a matter of right without further zoning or plat approval.”

“My client(s) hereby request the County to: 1) declare that there is no zoning preventing the development of this project, 2) remove this from the zoning calendar as it is not required to be rezoned, 3) issue building permits based on the plans that have already been submitted, and 4) identify any impact or building permit fees that must be paid so my client may promptly tender the fees,” according to the letter.

The letter refutes the opponents’ argument that the development would exacerbate existing traffic problems surrounding the intersection of Ga. 2 and Happy Valley Road, explaining that rezones were issued for a commercial development and construction of 700 single-family houses in that area. The letter explains why Gateway contends project opponents have no standing to appeal Whitfield’s rezoning of the property.

The letter threatens damages “in excess of $19 million, not including attorney’s fees” after spending roughly $725,000 in market studies, as well as funding, legal, architect, civil engineering and design fees. Gateway staff have spent hundreds of man-hours on the project.

The Walker County Development Authority issued $19 million in bonds for the project before the rezoning misstep’s discovery.

Rental rates will be structured for households in the $26,055 to $47,100 income bracket, with rents anticipated to be $760 for a one-bedroom, $910 for a two-bedroom and $1,050 for a three-bedroom unit. Mandell has insisted the project is not Section 8 housing as some people may think.

The following is a timeline of events related to the property's rezoning.

The Walker County Planning Commission conducted Feb. 20, 2020, the first public hearing and recommended denying the request. The Hutcheson family, on behalf of the developer, requested the rezone from agricultural and commercial to residential (R-2).

The county’s planning and development staff — citing 15 traffic accidents near the property from Jan. 1, 2018, through Jan. 1, 2020 — also recommended denying the request.

An informational meeting Oct. 22, 2020, at the Walker County Civic Center addressed traffic concerns about the project. The meeting was not a public hearing and was not conducted as one. The second hearing was not rescheduled.

More than 20 residents participated in a march in downtown LaFayette Aug. 26, 2021, and later that evening addressed Whitfield during the commissioners’ meeting about the county’s failure to follow the legal process for rezoning. Whitfield acknowledged the mistake and denied attempting to ram through the project without public input.

More than 40 people attended the public information meeting Sept. 13, which was hosted by the county, at the Walker County Civic Center. Project opponents at that meeting peppered Mandell with questions and concerns about traffic, school capacity, trespassing and other issues if the development proceeds.

The planning commission at its Sept. 16 meeting heard from concerned citizens and received a petition with the names of more than 100 opponents — including many property owners in the adjoining Mission Glen subdivision — before unanimously voting not to recommend the rezone.

Many residents in the area have opposed the development because of the increased traffic it would bring. Within the last year, the county also approved a planned unit development of nearly 500 houses, to be built over the next five to seven years, at the corner of Happy Valley Road and Battlefield Parkway.

She has been instrumental in bringing the Practice Assessment Exploration System (PAES) labs to the school system. The labs allows students with a variety of disabilities to learn hands-on activities that will be transferrable to a workplace setting, according to the news release.

She has also introduced the Project Search program, an international program that provides students with different abilities a chance to work in a local business in three different internship positions. The desired outcome is that students will be placed in a job at the end of their last year in high school.

In 2007 she became one Georgia’s first principals to be named a High Performance Principal by Gov. Sonny Perdue.

The Parent Mentor Partnership, a Georgia Department of Education Family Engagement initiative that places a parent of a special needs student in the school system to act as a liaison between the parents and the school system and to offer resources to parents, awards the Phil Pickens Leadership Award. Pickens created the partnership and dreamed that every school system in Georgia would have this liaison in place.

Chipotle is an adult male dog available for adoption at the Walker County Animal Shelter.

The Walker County officials remind residents that October is Adopt a Shelter Dog Month, a perfect time for families to give a forever home to a lucky dog.

The Walker County Animal Shelter is “full of amazing dogs seeking wonderful families who are looking for a companion to love,” according to a Walker County government news release.

Shelters and rescues are at capacity. Adoptions are at an all-time low, and pet surrenders have been high this year, straining resources at shelters, officials said.

Go to https://walkercountyga.gov/residents/animal-shelter/ to view the adoptable dogs and cats or meet them at the shelter at 5488 North Marble Top Road, Chickamauga.

Throughout October, a shelter walk by appointment only. Call the shelter at 706-375-2100 to schedule an appointment.