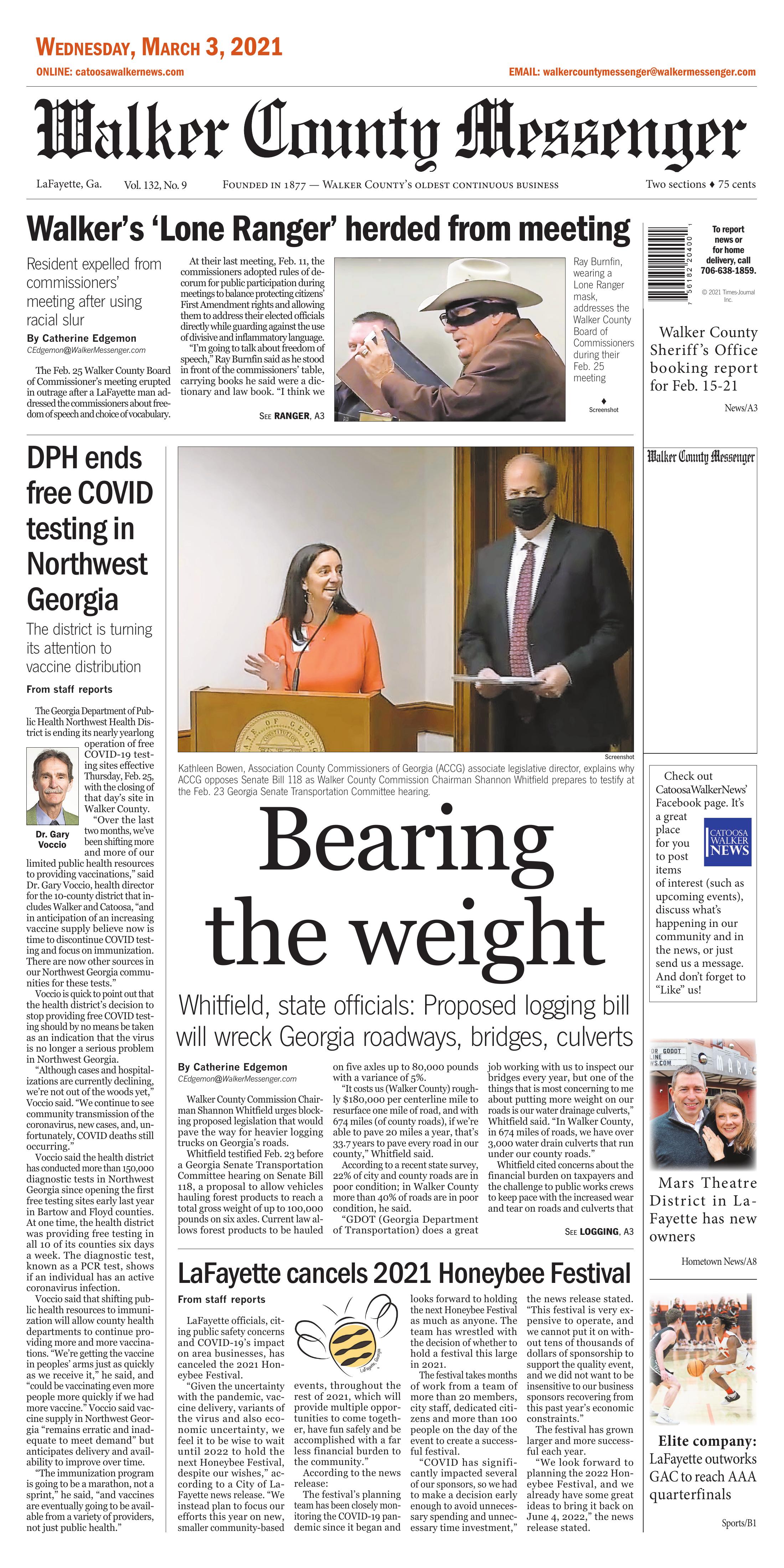 Ray Burnfin, wearing a Lone Ranger mask, addresses the Walker County Board of Commissioners during their Feb. 25 meeting.

The Feb. 25 Walker County Board of Commissioner’s meeting erupted in outrage after a LaFayette man addressed the commissioners about freedom of speech and choice of vocabulary.

At their last meeting, Feb. 11, the commissioners adopted rules of decorum for public participation during meetings to balance protecting citizens’ First Amendment rights and allowing them to address their elected officials directly while guarding against the use of divisive and inflammatory language.

“I’m going to talk about freedom of speech,” Ray Burnfin said as he stood in front of the commissioners’ table, carrying books he said were a dictionary and law book. “I think we may have to identify exactly what freedom of, what speech exactly consists of. I’m going to ask for some agreements from some of you fellows. Do you believe that when we speak English and we are in an English-speaking country...?”

At that point, Chairman Shannon Whitfield interrupted Burnfin to advise him, as a point of order, he should stand at the podium to address the commissioners. “Don’t call me out of order until I’ve identified what speech we are going to use,” Burnfin responded.

He said he could not find the term “N-word” and other politically-correct terms in the English language dictionary.

“The word ‘n-----’ is in here,” Burnfin said, adding that he does not believe using words in the dictionary is out of line; simultaneously the room erupted with shouts from commissioners and audience members for Burnfin to stop talking. At least one audience member looked at Burnfin and called him a racist.

Whitfield banged his gavel, told Burnfin he was out of order and ordered him to exit the building. Walker County Sheriff Steve Wilson and an officer walked to the podium, and the officer then escorted him away from the podium.

When Burnfin lingered near the room’s door, Whitfield instructed him, “Mr. Burnfin, you need to leave the building.”

Burnfin also chastised the commissioners for not yet responding to his request to talk privately with them and asked when he would get to do so.

Burnfin’s conduct during the Jan. 28 commissioners’ meeting prompted Whitfield to make a public statement the next day to apologize that the language was used on his watch; Whitfield and other speakers stated that the comments do not reflect the community’s viewpoints or values. Commissioner Robert Stultz read a letter from Burnfin’s child, which stated Burnfin has a history of mental illness, the statements reflect his mental state, the family does not support his statements and they are working to get him help.

The commissioners sat during their Jan. 28 meeting in apparent stunned silence as Burnfin, after urging racial harmony and forgiveness, uttered the N-word. He said he didn’t see anything wrong with using the word, and any word can be used derogatorily. He said he did not understand how Black folks use the word on each other, but it is hateful when White folks use it. He then walked away from the podium singing “Happy Trails.”

Burnfin was released on his own recognizance after his arrest Feb. 23 for misdemeanor theft by taking and criminal trespass on property.

County commissioners plan to adopt a formal ordinance outlining rules of decorum after the county completes its overhaul of the existing ordinances to clean up any inconsistencies and to ensure the ordinances are consistent with state law; the draft of the update will probably be ready for the commissioners and public to review in late summer, said Joe Legge, Walker County public relations director.

Whitfield testified Feb. 23 before a Georgia Senate Transportation Committee hearing on Senate Bill 118, a proposal to allow vehicles hauling forest products to reach a total gross weight of up to 100,000 pounds on six axles. Current law allows forest products to be hauled on five axles up to 80,000 pounds with a variance of 5%.

“GDOT (Georgia Department of Transportation) does a great job working with us to inspect our bridges every year, but one of the things that is most concerning to me about putting more weight on our roads is our water drainage culverts,” Whitfield said. “In Walker County, in 674 miles of roads, we have over 3,000 water drain culverts that run under our county roads.”

Whitfield cited concerns about the financial burden on taxpayers and the challenge to public works crews to keep pace with the increased wear and tear on roads and culverts that the extra weight would cause.

S.B. 118 was the only legislative bill discussed in a recent meeting of the Northwest Georgia Regional Commission, which represents 15 counties and 49 municipalities. The group unanimously passed a resolution opposing S.B. 118, he said.

“It is proven the heavier the truck, the greater the stopping distance and stopping time,” Vickery said. A fully-loaded, 80,000-pound truck traveling at 65 mph in ideal conditions needs almost the length of two football fields to stop.

Logging truck drivers are not subject to the hours-of-service rules other commercial truck drivers must obey to prevent fatigue while driving, meaning they can operate 24 hours per day, seven days a week if they operate solely within Georgia, he said. Fatigue increases reaction time.

“An out-of-service condition is a safety deficiency that is deemed so severe and unsafe when such conditions exist, it is immediate removal from the roadway to guarantee the safety of our public,” he said.

Meg Pirkle, GDOT’s chief engineer, cautioned, “What looks like a pro-economic development bill may not be.”

Forty percent of Georgia bridges are 50 years or older, their design lifespan, Pirkle said. If S.B. 118 becomes law, 1,464 Georgia bridges (16%) will be added to the load-restricted list, which already includes 1,232 local bridges.

Replacing bridges to accommodate the 100,000-pound limit will cost $1.5 billion, she explained. Trucks this size are prohibited on federal interstate highways.

With more bridges added to the load-restricted list, commute times will increase, not decrease, because of the alternate routes the heavier vehicles must take, she said.

Kathleen Bowen, Association County Commissioners of Georgia associate legislative director, shared concerns that producers of other commodities who now receive the 5% variance will want similar treatment if this increase passes for the logging industry. She also provided a history of the times Georgia code has been changed to accommodate requests from cotton, solid waste and other commodities.

Other states allow greater gross vehicle weights on their roadways, and the lower weight limits put the state at a competitive disadvantage because of the increased transportation costs, he said.

Vallegas emphasized forestry’s role in Georgia’s economy, stating Georgia is the nation’s No. 1 forestry state, and 21% of all U.S. forest products are exported from Georgia.

“Given the uncertainty with the pandemic, vaccine delivery, variants of the virus and also economic uncertainty, we feel it to be wise to wait until 2022 to hold the next Honeybee Festival, despite our wishes,” according to a City of LaFayette news release. “We instead plan to focus our efforts this year on new, smaller community-based events, throughout the rest of 2021, which will provide multiple opportunities to come together, have fun safely and be accomplished with a far less financial burden to the community.”

According to the news release:

The festival’s planning team has been closely monitoring the COVID-19 pandemic since it began and looks forward to holding the next Honeybee Festival as much as anyone. The team has wrestled with the decision of whether to hold a festival this large in 2021.

The festival takes months of work from a team of more than 20 members, city staff, dedicated citizens and more than 100 people on the day of the event to create a successful festival.

“COVID has significantly impacted several of our sponsors, so we had to make a decision early enough to avoid unnecessary spending and unnecessary time investment,” the news release stated. “This festival is very expensive to operate, and we cannot put it on without tens of thousands of dollars of sponsorship to support the quality event, and we did not want to be insensitive to our business sponsors recovering from this past year’s economic constraints.”

The festival has grown larger and more successful each year.

“We look forward to planning the 2022 Honeybee Festival, and we already have some great ideas to bring it back on June 4, 2022,” the news release stated.

The Georgia Department of Public Health Northwest Health District is ending its nearly yearlong operation of free COVID-19 testing sites effective Thursday, Feb. 25, with the closing of that day’s site in Walker County.

“Over the last two months, we’ve been shifting more and more of our limited public health resources to providing vaccinations,” said Dr. Gary Voccio, health director for the 10-county district that includes Walker and Catoosa, “and in anticipation of an increasing vaccine supply believe now is time to discontinue COVID testing and focus on immunization. There are now other sources in our Northwest Georgia communities for these tests.”

Voccio is quick to point out that the health district’s decision to stop providing free COVID testing should by no means be taken as an indication that the virus is no longer a serious problem in Northwest Georgia.

“Although cases and hospitalizations are currently declining, we’re not out of the woods yet,” Voccio said. “We continue to see community transmission of the coronavirus, new cases, and, unfortunately, COVID deaths still occurring.”

Voccio said the health district has conducted more than 150,000 diagnostic tests in Northwest Georgia since opening the first free testing sites early last year in Bartow and Floyd counties. At one time, the health district was providing free testing in all 10 of its counties six days a week. The diagnostic test, known as a PCR test, shows if an individual has an active coronavirus infection.

Voccio said that shifting public health resources to immunization will allow county health departments to continue providing more and more vaccinations. “We’re getting the vaccine in peoples’ arms just as quickly as we receive it,” he said, and “could be vaccinating even more people more quickly if we had more vaccine.” Voccio said vaccine supply in Northwest Georgia “remains erratic and inadequate to meet demand” but anticipates delivery and availability to improve over time.

“The immunization program is going to be a marathon, not a sprint,” he said, “and vaccines are eventually going to be available from a variety of providers, not just public health.”