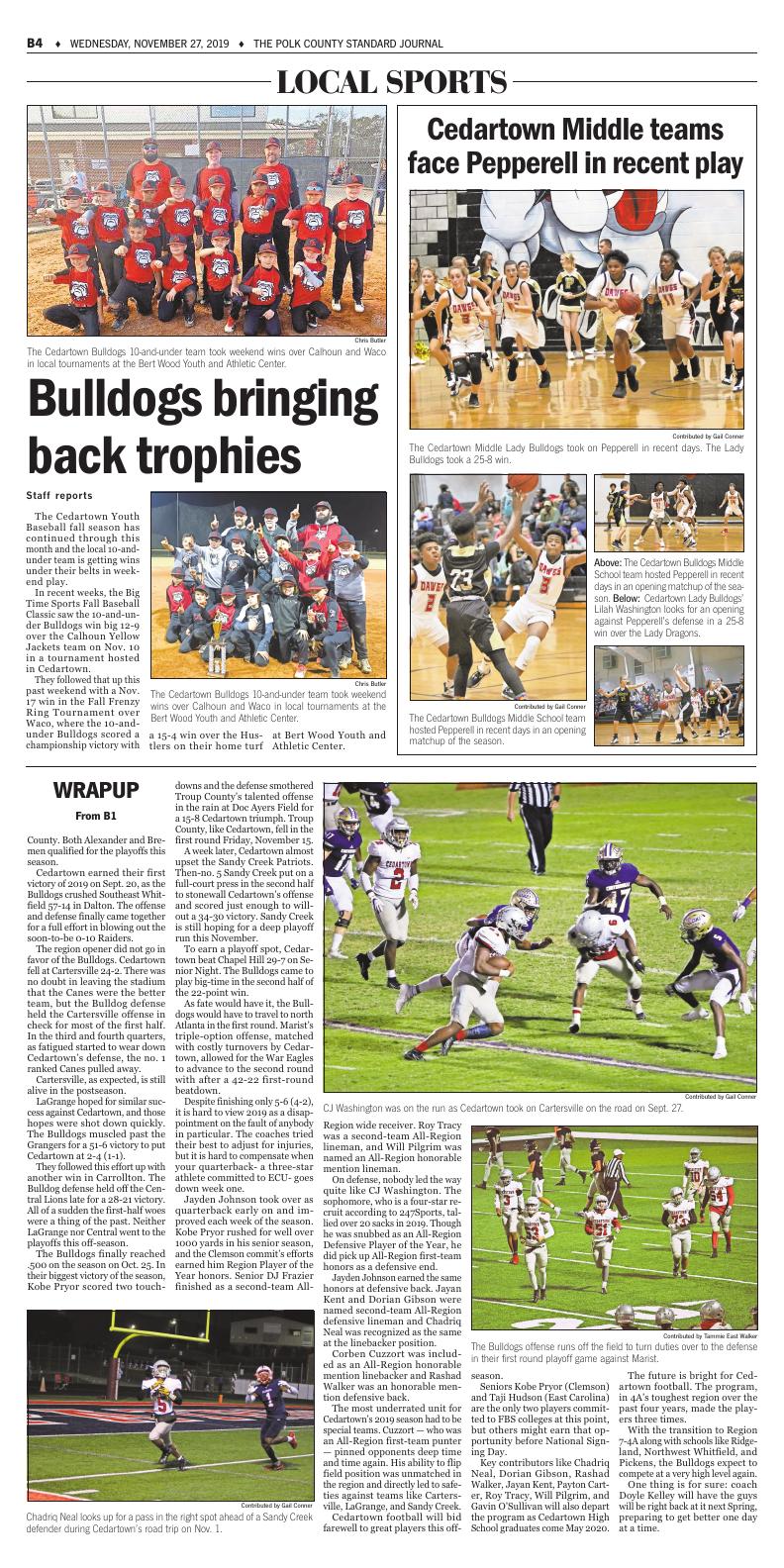 The Cedartown Bulldogs 10-and-under team took weekend wins over Calhoun and Waco in local tournaments at the Bert Wood Youth and Athletic Center.

The Cedartown Bulldogs 10-and-under team took weekend wins over Calhoun and Waco in local tournaments at the Bert Wood Youth and Athletic Center.

The Cedartown Youth Baseball fall season has continued through this month and the local 10-and-under team is getting wins under their belts in weekend play.

In recent weeks, the Big Time Sports Fall Baseball Classic saw the 10-and-under Bulldogs win big 12-9 over the Calhoun Yellow Jackets team on Nov. 10 in a tournament hosted in Cedartown.

They followed that up this past weekend with a Nov. 17 win in the Fall Frenzy Ring Tournament over Waco, where the 10-and-under Bulldogs scored a championship victory with a 15-4 win over the Hustlers on their home turf at Bert Wood Youth and Athletic Center.

Chadriq Neal looks up for a pass in the right spot ahead of a Sandy Creek defender during Cedartown’s road trip on Nov. 1.

Jayden Johnson scrambles toward the out of bounds line to stop the clock near the end of the first half as the Bulldogs drove for a late touchdown over Chapel Hill.

The Bulldogs offense runs off the field to turn duties over to the defense in their first round playoff game against Marist.

Quarterback Jayden Johnson tucked the ball and ran toward the goal line and a first down against Troup County.

CJ Washington was on the run as Cedartown took on Cartersville on the road on Sept. 27.

The Cedartown Bulldogs will have to try again next season after their hopes of an extended season came to an end against Marist.

Though it started off rocky, Cedartown battled through adversity this season to qualify for the playoffs.

Cedartown started preseason play with a 21-0 win in a scrimmage against 6A Morrow. The Mustangs finished 6-5 and lost in the first round of the GHSA 6A Football State Playoffs. The Bulldogs followed this up with one more scrimmage win: a 55-0 thumping of 2A Chattooga. The Indians of Summerville went 5-6 in 2019 and also fell in the first round of the playoffs on Friday night.

We all know how the official season opener went.

Rockmart, coached by Biff Parson, entered Cedartown 0-0 and left 1-0. The Yellow Jackets controlled the game for the most part and walked away with a 31-12 victory.

Even bigger than the rivalry game loss was the loss of Cedartown starting quarterback Taji Hudson. The senior left the game in the third quarter with season-ending internal injuries that required treatment at the Erlanger in Chattanooga.

The Bulldogs struggled to find a signal-caller after Hudson’s unexpected injury. Sophomore MJ Holiday, freshman Reece Tanner, and junior Jayden Johnson all received playing time in the following weeks as head coach Doyle Kelley, offensive coordinator Benjie Frazier, and the rest of the coach staff got a feel for their quarterback situation.

In week two, Cedartown fell at 6A Alexander 27-20. After a bye week, the Bulldogs came just short of knocking off Bremen. Instead, the Blue Devils beat Cedartown 10-7 on a last-second field goal in Haralson County. Both Alexander and Bremen qualified for the playoffs this season.

Cedartown earned their first victory of 2019 on Sept. 20, as the Bulldogs crushed Southeast Whitfield 57-14 in Dalton. The offense and defense finally came together for a full effort in blowing out the soon-to-be 0-10 Raiders.

The region opener did not go in favor of the Bulldogs. Cedartown fell at Cartersville 24-2. There was no doubt in leaving the stadium that the Canes were the better team, but the Bulldog defense held the Cartersville offense in check for most of the first half. In the third and fourth quarters, as fatigued started to wear down Cedartown’s defense, the no. 1 ranked Canes pulled away.

Cartersville, as expected, is still alive in the postseason.

LaGrange hoped for similar success against Cedartown, and those hopes were shot down quickly. The Bulldogs muscled past the Grangers for a 51-6 victory to put Cedartown at 2-4 (1-1).

They followed this effort up with another win in Carrollton. The Bulldog defense held off the Central Lions late for a 28-21 victory. All of a sudden the first-half woes were a thing of the past. Neither LaGrange nor Central went to the playoffs this off-season.

The Bulldogs finally reached .500 on the season on Oct. 25. In their biggest victory of the season, Kobe Pryor scored two touchdowns and the defense smothered Troup County’s talented offense in the rain at Doc Ayers Field for a 15-8 Cedartown triumph. Troup County, like Cedartown, fell in the first round Friday, November 15.

A week later, Cedartown almost upset the Sandy Creek Patriots. Then-no. 5 Sandy Creek put on a full-court press in the second half to stonewall Cedartown’s offense and scored just enough to will-out a 34-30 victory. Sandy Creek is still hoping for a deep playoff run this November.

To earn a playoff spot, Cedartown beat Chapel Hill 29-7 on Senior Night. The Bulldogs came to play big-time in the second half of the 22-point win.

As fate would have it, the Bulldogs would have to travel to north Atlanta in the first round. Marist’s triple-option offense, matched with costly turnovers by Cedartown, allowed for the War Eagles to advance to the second round with after a 42-22 first-round beatdown.

Despite finishing only 5-6 (4-2), it is hard to view 2019 as a disappointment on the fault of anybody in particular. The coaches tried their best to adjust for injuries, but it is hard to compensate when your quarterback- a three-star athlete committed to ECU- goes down week one.

On defense, nobody led the way quite like CJ Washington. The sophomore, who is a four-star recruit according to 247Sports, tallied over 20 sacks in 2019. Though he was snubbed as an All-Region Defensive Player of the Year, he did pick up All-Region first-team honors as a defensive end.

Jayden Johnson earned the same honors at defensive back. Jayan Kent and Dorian Gibson were named second-team All-Region defensive lineman and Chadriq Neal was recognized as the same at the linebacker position.

The most underrated unit for Cedartown’s 2019 season had to be special teams. Cuzzort — who was an All-Region first-team punter — pinned opponents deep time and time again. His ability to flip field position was unmatched in the region and directly led to safeties against teams like Cartersville, LaGrange, and Sandy Creek.

Cedartown football will bid farewell to great players this off-season.

Seniors Kobe Pryor (Clemson) and Taji Hudson (East Carolina) are the only two players committed to FBS colleges at this point, but others might earn that opportunity before National Signing Day.

The future is bright for Cedartown football. The program, in 4A’s toughest region over the past four years, made the players three times.

With the transition to Region 7-4A along with schools like Ridgeland, Northwest Whitfield, and Pickens, the Bulldogs expect to compete at a very high level again.

One thing is for sure: coach Doyle Kelley will have the guys will be right back at it next Spring, preparing to get better one day at a time. 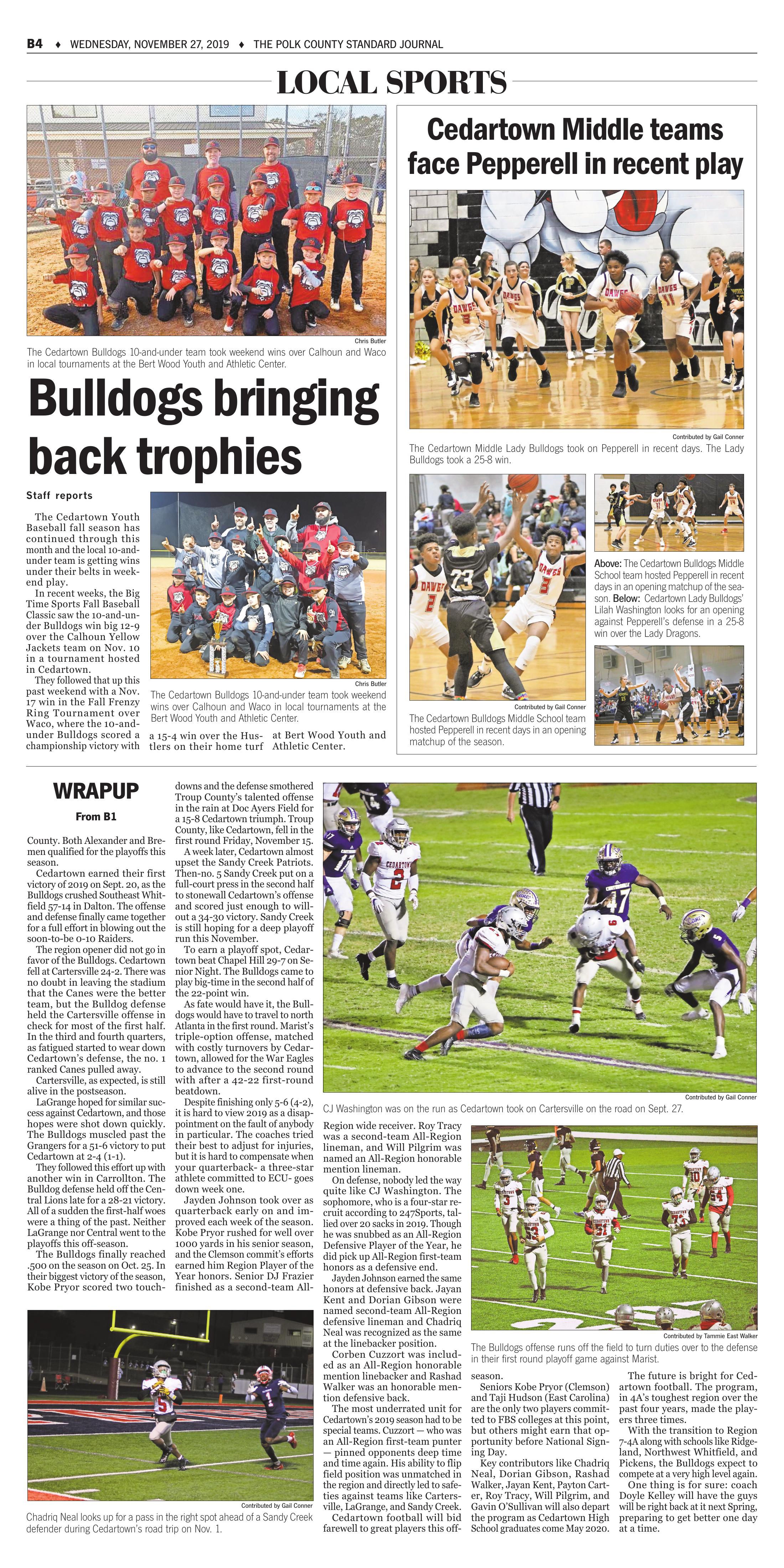