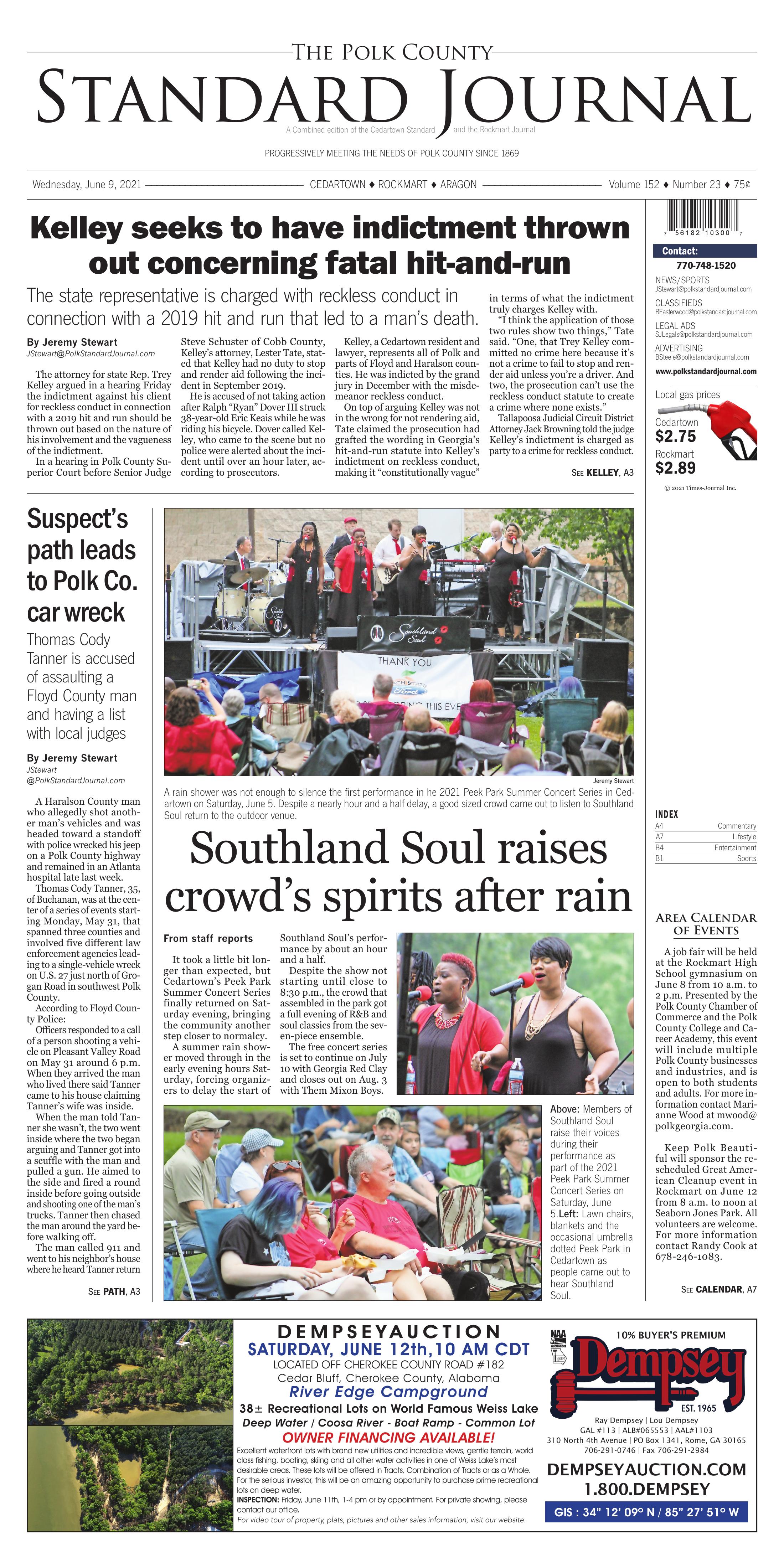 Rep. Trey Kelley (left) stands with his attorney Lester Tate at the conclusion of a motion hearing in Polk County Superior Court on Friday, June 4, 2021.

The attorney for state Rep. Trey Kelley argued in a hearing Friday the indictment against his client for reckless conduct in connection with a 2019 hit and run should be thrown out based on the nature of his involvement and the vagueness of the indictment.

In a hearing in Polk County Superior Court before Senior Judge Steve Schuster of Cobb County, Kelley’s attorney, Lester Tate, stated that Kelley had no duty to stop and render aid following the incident in September 2019.

He is accused of not taking action after Ralph “Ryan” Dover III struck 38-year-old Eric Keais while he was riding his bicycle. Dover called Kelley, who came to the scene but no police were alerted about the incident until over an hour later, according to prosecutors.

Kelley, a Cedartown resident and lawyer, represents all of Polk and parts of Floyd and Haralson counties. He was indicted by the grand jury in December with the misdemeanor reckless conduct.

On top of arguing Kelley was not in the wrong for not rendering aid, Tate claimed the prosecution had grafted the wording in Georgia’s hit-and-run statute into Kelley’s indictment on reckless conduct, making it “constitutionally vague” in terms of what the indictment truly charges Kelley with.

“I think the application of those two rules show two things,” Tate said. “One, that Trey Kelley committed no crime here because it’s not a crime to fail to stop and render aid unless you’re a driver. And two, the prosecution can’t use the reckless conduct statute to create a crime where none exists.”

Tate relayed the events of the evening to the court as Schuster said he had no previous knowledge of the case. Browning said that recitation of the events squared with the charges.

“In taking Mr. Tate’s facts, Mr. Dover called (Kelley) to the scene. When he got to the scene, there was a period of time during which the hit and run was never reported,” Browning said. “That’s where Mr. Kelley’s involvement comes into it.”

Keais was riding his bike on North Main Street near Frances Drive in Cedartown on the evening of Sept. 11, 2019, when he was allegedly struck by a vehicle driven by Dover.

Not sure what he had hit, Dover continued to drive to a nearby business where he then called Kelley.

Dover and Kelley were waiting across the street from the incident location in the Dollar General parking lot in Cedartown after the incident happened, the report stated.

According to prosecutors Keais was struck at 8:20 p.m., but the first police on the scene calling for ambulance and fire service didn’t happen until 9:26 p.m.

It was only after Turner arrived that Keais’ body was found in the ditch some 75 to 100 feet away from the bicycle in the roadway. Emergency medical personnel were called, and Keais was taken to the hospital where he died.

A Georgia State Patrol investigation noted “there had not only been a hit and run aspect to this (Motor Vehicle Accident/Fatality) but there was a breach in the dispatch of assistance to our victim, Eric C. Keais.”

Dover was indicted on charges of felony hit and run and reckless conduct. He is currently free on bond pending a trial.

Schuster requested that both Browning and Tate present him with proposed orders that he will consider and present his ruling at a time in the next six weeks.

A rain shower was not enough to silence the first performance in he 2021 Peek Park Summer Concert Series in Cedartown on Saturday, June 5. Despite a nearly hour and a half delay, a good sized crowd came out to listen to Southland Soul return to the outdoor venue.

Members of Southland Soul raise their voices during their performance as part of the 2021 Peek Park Summer Concert Series on Saturday, June 5.

Miles Dittmer, 5, of Cedartown, enjoys running through the fountain at Peek Park during a weather delay of the opening performance of the 2021 Peek Park Summer Concert Series on Saturday, June 5.

Lawn chairs, blankets  and the occasional umbrella  dotted Peek Park in Cedartown as people came out to hear Southland Soul on Saturday, June 5.

A summer rain shower moved through in the early evening hours Saturday, forcing organizers to delay the start of Southland Soul’s performance by about an hour and a half.

Despite the show not starting until close to 8:30 p.m., the crowd that assembled in the park got a full evening of R&B and soul classics from the seven-piece ensemble.

The free concert series is set to continue on July 10 with Georgia Red Clay and closes out on Aug. 3 with Them Mixon Boys.

A Haralson County man who allegedly shot another man’s vehicles and was headed toward a standoff with police wrecked his jeep on a Polk County highway and remained in an Atlanta hospital late last week.

Thomas Cody Tanner, 35, of Buchanan, was at the center of a series of events starting Monday, May 31, that spanned three counties and involved five different law enforcement agencies leading to a single-vehicle wreck on U.S. 27 just north of Grogan Road in southwest Polk County.

According to Floyd County Police:

Officers responded to a call of a person shooting a vehicle on Pleasant Valley Road on May 31 around 6 p.m. When they arrived the man who lived there said Tanner came to his house claiming Tanner’s wife was inside.

When the man told Tanner she wasn’t, the two went inside where the two began arguing and Tanner got into a scuffle with the man and pulled a gun. He aimed to the side and fired a round inside before going outside and shooting one of the man’s trucks. Tanner then chased the man around the yard before walking off.

The man called 911 and went to his neighbor’s house where he heard Tanner return to the home and shoot his other truck before leaving.

Floyd County Police were able to determine Tanner lived in Haralson County and notified the Haralson County Sheriff’s Office. Sheriff Stacy Williams said when his deputies assessed the situation as well as the involvement of an AR-15 rifle they obtained a search warrant for Tanner’s home on Lee Road in the Felton community.

Williams said they got word of the list and took action to ensure the safety of Lim, who lives in Haralson County, as well as other judges in the county.

Williams said they contacted Paulding County SWAT to assist with serving the search warrant at Tanner’s home. By the time they arrived late that night, Tanner had left. When they conducted a search they found the house set up to be barricaded in preparation for a possible standoff with police.

According to the Georgia State Patrol, Tanner was reportedly driving his 2001 Jeep Wrangler north on U.S. 27 south of Cedartown around 1:40 a.m. Tuesday, June 1, when the vehicle ran off the road into the median and struck a culvert. The jeep then overturned three times before coming to a rest on the west side of the highway.

Tanner was air flighted to Grady Hospital in Atlanta where he remained in critical condition at last check prior to press time.

Floyd County has active warrants for Tanner on charges of aggravated assault, battery, second-degree criminal damage to property and reckless conduct. Neither Polk County Police nor the Haralson County Sheriff’s Office have charges pending against Tanner. 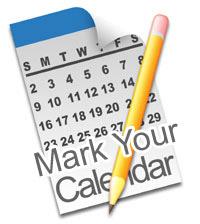 A job fair will be held at the Rockmart High School gymnasium on June 8 from 10 a.m. to 2 p.m. Presented by the Polk County Chamber of Commerce and the Polk County College and Career Academy, this event will include multiple Polk County businesses and industries, and is open to both students and adults. For more information contact Marianne Wood at mwood@polkgeorgia.com.

Keep Polk Beautiful will sponsor the rescheduled Great American Cleanup event in Rockmart on June 12 from 8 a.m. to noon at Seaborn Jones Park. All volunteers are welcome. For more information contact Randy Cook at 678-246-1083.

The Good Neighbor Center Food Pantry in Cedartown serves Polk County residents. Located next to the Cedartown Seventh-day Adventist Church at 71 Woodall Road, the pantry will be open Sunday, June 13 from noon to 3 p.m. Recipients still remain in their vehicle when getting food boxes. For for information call 678-901-9184.

The Cedartown High School class of 1971 will celebrate its 50th reunion on June 19 with a tour of Cedartown High School, followed by visits to the Polk County Historical Society Museum, Doug Sanders Golf Museum and Remix at Moore’s. A reception will be held at 6:30 p.m. at the Cedartown Coca-Cola Museum. For more information, contact Patty Rogers at progers9253@gmail.com

Kresge United Methodist Church’s clothing bank is moving to McBrayer Furniture at 502 Main St. in Cedartown beginning July 1. The clothing bank is open the first Thursday of each month from 10 a.m. to noon. The church offers free clothing for ages birth to 5 years old.

Sons of the American Legion Post 12 in Rockmart is hosting a $5 All-You-Can-Eat spaghetti and meatball supper the third Wednesday of the month from 5-7 p.m. at 1 Veterans Circle. Each meal comes with garlic bread, salad and tea, and all proceeds got to veterans’ and children’s programs.

Tallatoona CAP is accepting appointments for the LIHEAP Cooling Assistance Program for households with seniors age 65 or older. Appointments are on a first-come, first-serve basis and can me made online at www.tallatoonacap.org or by calling 770-817-4666 or 770-773-7730 and selecting option 2. Applicants must qualify based on the FY 2021 annual income guidelines.