Santa and Mrs. Claus read a Christmas story to Beth Abbott’s kindergarten class at St. Mary’s Catholic School on Thursday after surprising the kids with a visit for donating personal care items to the Open Door Children’s Home.

Amanda Adams (left), a board member at the Open Door Children’s Home, surprises Beth Abbott’s kindergarten class with a visit from Santa Claus at St. Mary’s Catholic School on Thursday.

The students collected personal items to donate to Open Door Children’s Home. Amanda Adams, a board member at the home and a room mom in Abbott’s classroom, said it was heartwarming to see the kids be so generous.

The kids were thrilled when Santa and Mrs. Claus came into the classroom to visit them.

The couple read them the story of Rudolph, the red-nosed reindeer.

Usually, Adams is in charge of a Christmas party at the school and parents contribute items for the party. While she still plans to host a party at another time, she thought it would be a good idea to help the kids who are in the group home during the holidays.

“They’re kids, they shouldn’t have to worry about these things,” said Adams. The class collected items like toothbrushes, deodorants, and soap.

“When I was a kid, there were things you didn’t want to ask for, for Christmas, but you need,” she said. “I know that these are items the kids at the home need and might not have.”

They’ve been collecting items since the beginning of December. In that short time, the kids brought in crates full of personal care items. Tracie Ball, the executive director of the Open Door Children’s Home, said the gesture is appreciated.

“We’re just grateful for the support of the community,” said Ball.

She also said that it’s important students learn to be good stewards of their community at an early age.

“They don’t have a lot of stuff,” said kindergartner Thomas Lemming, when asked why it was important to give back.

The children’s home can use monetary donations throughout the year, Ball said.

She also said they like to keep kids, who range from age 12 to 18, busy by taking them outside and doing things.

On Wednesday, Rome’s Historic Preservation Commission approved the final additions atop the historic building on the corner of South Broad Street and First Avenue, despite the fact that the roofing extending over the clerestory’s outdoor patio was done before final approval.

The Rome Historic Preservation Commission debated whether there should be penalties for projects that are completed without final approval — such as was done with additions atop the historic building at 100 S. Broad St.

Although the commission was fine with the look of a railing and a covering over the outdoor patio of the rooftop clerestory done by property owners Tim and Molly Vicchrilli, at least one HPC member and City Commissioner Evie McNiece expressed reservations over approving the project after the fact, without imposing some sort of fine.

“Have we ever considered — and it may even be illegal — fining any of these people who just go and do whatever the Hades they want to do?” HPC member Mary Sib Banks asked after the project was given unanimous approval. “The way I look at it is, we’re condoning their not coming to us by just overlooking whatever they do.”

Longtime member Roger Wade said he didn’t think the problem was prevalent enough to start imposing fines — and even if they did, it would be difficult to keep track of everything.

“You’ve got someone spending, in this case in particular, almost a million dollars on that doggone building on the end of Broad Street that is added to the tax base,” Wade said of the Vicchrillis, who also own the Pro Performance Fitness Coaching business on the first floor. “They’re doing a conscientious job. Why penalize somebody? It just seems like bureaucratic red tape to me.”

McNiece said she agreed with Banks’ concern and cautioned the commission about future projects where the property owners are asking for forgiveness later.

Chief Building Official James Martin asked commissioners if they would actually deny applicants if they had to come back for approval after already completing projects.

Martin said it was not uncommon for projects to stray from their original design.

“If I went through them piece by piece, a lot of them would have to come back to us,” Martin said. “I don’t know if the commission wants me to fine people, but if that’s what they want we can do it, but that’s not what I want to do.”

Wade said that in his 16 years of being on the commission, he could only recall one project that was completed without approval where the commission required the applicant to remove the unapproved portions.

“There was the time we forced that young man to take those blasted stacked rocks off the front of the building next to The Forrest,” Wade said.

Wade said that although the Vicchrillis did go ahead and extend the railing on the rooftop to reach all the way across the front — instead of only halfway, as was in the original plan — he thought it looked better that way, anyway.

The covering over the clerestory’s rooftop porch also was done in a fashion that was attractive and did not detract from the historic facade of the building built in the early 1900s, the commission agreed in the end.

The project’s contractor, Ron Goss, thanked the commission for allowing his client’s vision to proceed despite the fact that they had Goss apologize to the commission at the start of Wednesday’s meeting.

“On behalf of the messenger, thanks for not shooting me,” Goss said, prompting laughter from the commission. 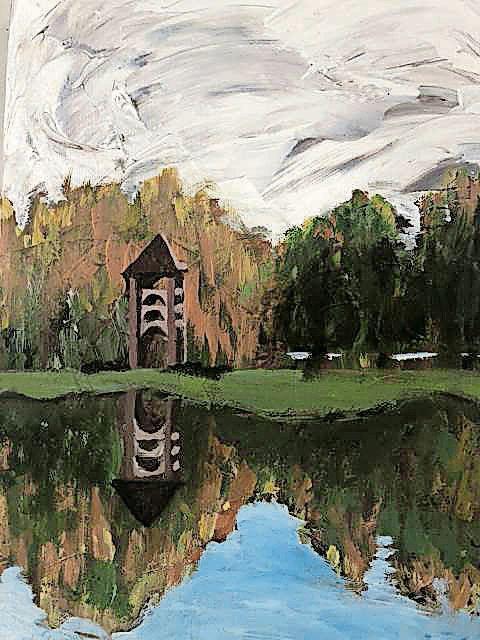 A man who shot a 74-year-old during a get together earlier this year was convicted of voluntary manslaughter Thursday but won’t be sentenced until January.

According to information presented in Floyd County Superior Court:

Wallace Chambers Jr., 46, got into an argument with Johnny Lewis Price over a game of horseshoes at a Hardy Avenue block party in late May.

The argument devolved into challenges to a boxing match. But when Price said he was going to his vehicle to get boxing gloves, Chambers shot Price in the back four times, killing the older man.

Rome Circuit Public Defender Jonathan Speiser reiterated several times in his closing arguments that Chambers believed his life was in danger and that Price had a gun in his vehicle.

Investigators found a firearm in a black bag in Price’s truck. Earlier that day, witnesses testified Price had shown the bag to Chambers, saying, “I got something for you, but I ain’t going to use it on you.”

Speiser argued that Chambers shot Price to protect himself as well as his girlfriend and 3-year-old daughter.

However, Assistant District Attorney Luke Martin argued that Chambers didn’t know for sure that Price had a gun and that Price had said he wasn’t going to use it anyway.

Martin also reminded jurors, in his closing argument, that none of the other witnesses thought Price had a gun readily on him and didn’t believe that the fight would escalate that much.

Martin also said none of the other witnesses heard Price threaten Chambers with death or great bodily injury — they were just going to box.

In addition to voluntary manslaughter, Chambers was also convicted of possession of a weapon during the commission of a crime and aggravated assault. Judge Kay Ann Wetherington scheduled his sentencing hearing for Jan. 28.

In this 2016 file photo a Cessna Citation business jet sits at Floyd County's Richard B. Russell Regional Airport, in front of the main runway that is slated to be extended to 7,000 feet from 6,000 feet to accommodate larger planes.

The Richard B. Russell Regional Airport runway extension project has been in the works for well over a year — and 2020 just might be the year the project starts coming to fruition.

Once the project is completed, McCord said, it will be the second-longest runway in North Georgia, excluding Hartsfield-Jackson Atlanta International Airport. The extension would increase the current runway to roughly 7,040 feet, which would create a safer runway for planes. That’s long enough to accommodate most corporate jets and all but the largest planes.

According to McCord, extending the runway past 7,000 feet will also decrease insurance costs for the airport and, hopefully, increase traffic and fuel sales.

The extension is being funded by the 2013 special purpose, local option sales tax for $5.7 million and was originally up for bid as a single all-encompassing project — including grating, drainage, base and paving and electrical.

However, when the project went up for bid in July 2018, there wasn’t much competition and the responses were over the available budget.

To attract more bidders and gain better offers, the airport commission decided to split the single project into three separate projects: grating and drainage, base and paving and electrical — which includes lighting and instrument landing system.

Currently airport consultants are working on revisions and will then send the projects to the Georgia Department of Transportation for approval. McCord said they hope to have the project specifications ready for bid in February and open the bidding in March.