Bigstory
Another spike: COVID-19 cases in Floyd County rise by 24 in one day
By John Bailey JBailey@RN-T.com

This chart shows the cumulative and daily COVID-19 cases in Floyd County.

The number of new COVID-19 cases reported in Floyd County in one day eclipsed the previous record set earlier this week.

The Georgia Department of Public Health reported 24 people had tested positive Wednesday for the disease caused by the coronavirus. The previous highest number of cases was reported on Monday, at 22.

The number hasn’t been that high since May 19, when over 20 people were reported positive in a single day. Over the past seven days, Floyd County has had 77 more people confirmed positive for COVID-19.

However, hospitalizations have stayed flat. The number of people being treated at local hospitals remained at seven, according to Floyd County Emergency Management Agency Director Tim Herrington. Overall, just 51 of the 457 local residents who have tested positive needed in-patient care.

The number of young adults testing positive for COVID-19 has increased in recent weeks across many states, according to Georgia Health News reports.

The age group in Georgia with the most new infections is people from ages 18 to 29, according to state data.

Officials said the recent spike — among those ages 20-39 — could be explained by a combination of increased testing, rejection of social distancing and masks, and a continued misconception among young people that they’re not likely to become infected.

While younger people rarely get seriously ill or die from the virus, they often catch it and can spread it to more vulnerable populations.

In the 10-county Northwest Georgia Health District, which includes Floyd County, there has been anecdotal evidence that the number of young adults infected with COVID-19 has increased. 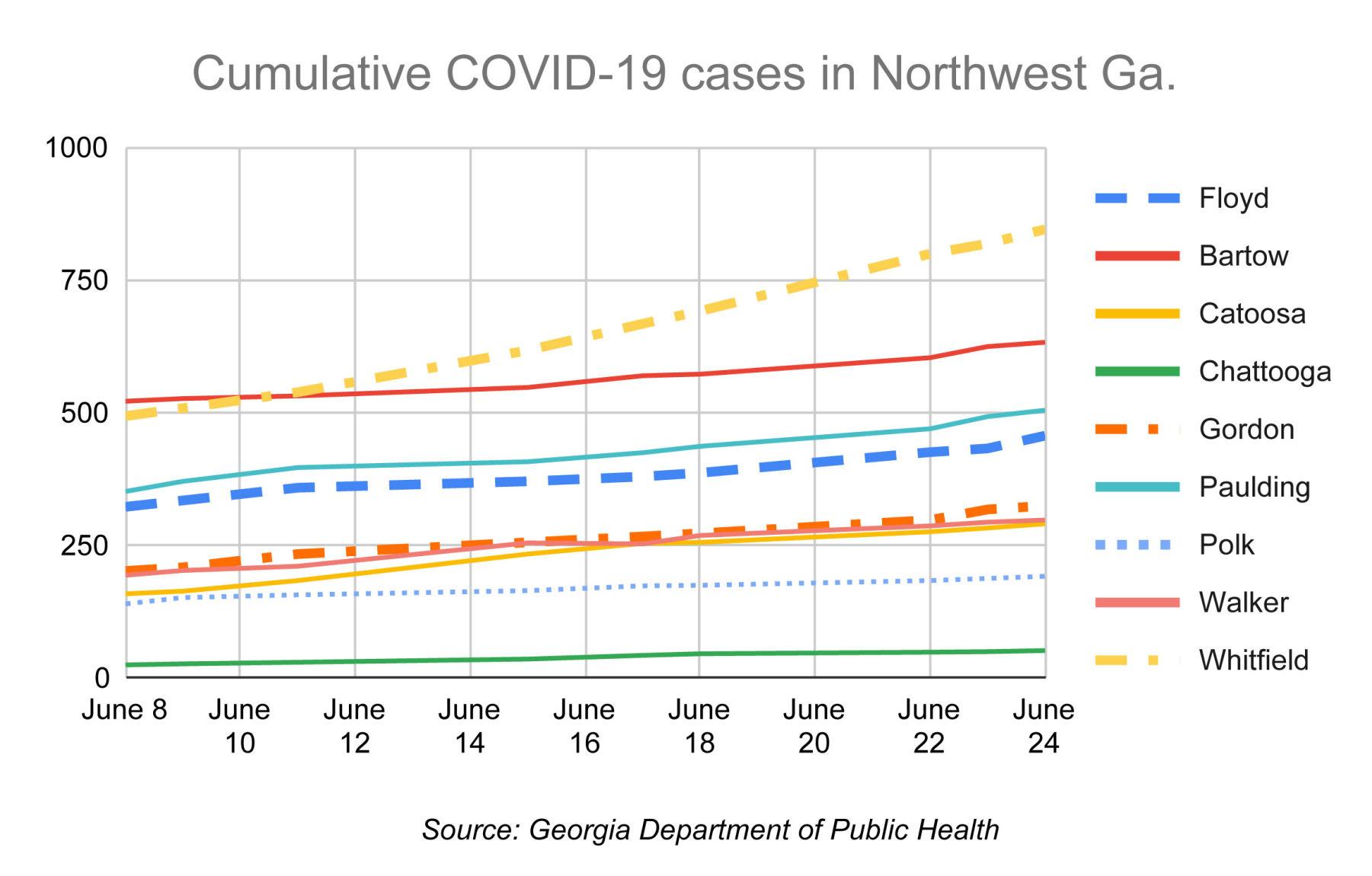 Source: The Department of Public Health

A look at cumulative number of COVID-19 cases in Northwest Georgia on June 24, 2020. The number of new cases reported in several counties — including Floyd and Gordon — have begun to show an uptick, while Whitfield County at the top is gaining a significant amount of new COVID-19 infections. The number of new cases in several counties in Northwest Georgia has remained relatively flat over this time period.

Floyd County has a total of 15 fatalities attributed to COVID-19, but no deaths since May 26. The people who have died were between the ages of 56 and 81 and all had preexisting medical conditions, according to DPH statistics.

Those with less risk less likely to take precautions

Georgia Health News reports that a CDC survey of attitudes toward stay-at-home orders and social distancing guidelines showed people aged 18-24 were significantly less likely than other groups to agree that nonessential workers should stay home.

Less than 30% said they were consistently staying 6 feet away from other people, and only 44.4% said they always wore a mask in public.

Dr. Mark Ebell, a professor of epidemiology at University of Georgia’s College of Public Health, told GHN that up to 90% of younger people who have the virus don’t show symptoms. Plus, “they tend to be willing to take more risks,” he said.

In the beginning of the outbreak, only people with symptoms got tested, if a test was available. Now many places offer tests to anyone who wants one.

But public health experts point out that because younger people are more likely to ignore restrictions, they’re making it easier for coronavirus to spread.

Floyd County school board members voted Wednesday to tentatively keep the millage rate unchanged at 18.25 mills until the state passes a budget.

Prior to passage, board member Chip Hood recommended reducing the millage rate to 18.24 mills in order to lessen taxes on county residents.

Board Chair Tony Daniel and board member Melinda Jeffers disagreed, however, saying they didn’t want to send mixed messages to staff and Floyd residents.

“This sends a wrong message if we were to reduce revenue and then furlough teachers,” Daniel said in the discussion. Daniel said they’ve cut the millage rate five of the six years he’s been on the board, but this doesn’t seem to be the right time to cut back.

Gov. Brian Kemp initially asked for 14% cuts to all state agencies but later changed it to 11%. Superintendent Jeff Wilson said the recent announcement would likely save “hundreds of thousands” but the cut still amounts to millions out of their budget.

And, even after the governor approves the state budget, they may face mid-year cuts if the economy doesn’t improve, Wilson said.

In the interim, he said, lottery revenue has not been affected much by shutdowns and it appears the pre-kindergarten programs would not be affected by cuts. Georgia’s Pre-K programs are funded by the state lottery.

Wilson also told the board the dates for in-person graduation ceremonies have been set for July 23 and 24 but they won’t be inside a facility.

Looking at Department of Public Health recommendations, the school system is planning to keep those ceremonies outside — although a venue has not yet been determined.

They will likely be held in the evening, Wilson said, since that’s when summer temperatures begin to drop.

“Everything is still up in the air,” he told the school board.

Also on Wednesday, the school board approved the purchase of two special education buses. The buses were available at a reduced price after another school system ordered them from the manufacturer and then backed out of the order.

The price of the two buses came in at around $96,000 each but Wilson said the school system needs them to protect and transport one of their most vulnerable populations.

“Those kids will be the most vulnerable kids we have,” Wilson said.

Those policies could include randomized drug screening or training seminars for staff members. 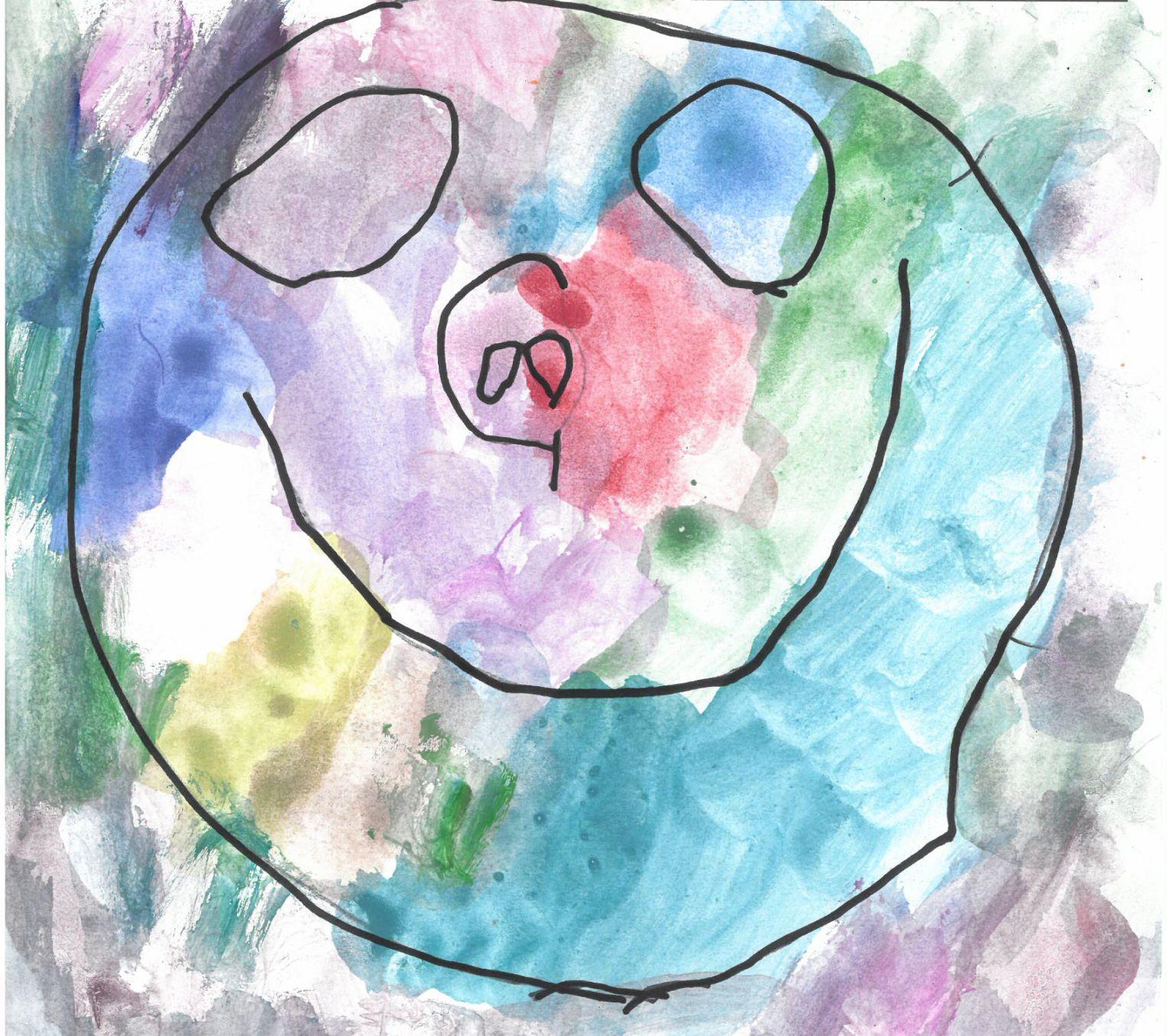 Framing is well underway on the new Northwest Georgia Housing Authority duplex townhomes at Charlton Street and Martha Berry Boulevard. Roof trusses should go up in the next week, according to Construction and Modernization Director Howard Gibson.

The Northwest Georgia Housing Authority has paid off the debt associated with the Rome Children’s Academy, a preschool facility in the John Graham Homes complex in East Rome.

Executive Director Sandra Hudson said the last of the debt on the school was cleared from the books when they closed on financing for the construction of replacement apartments at Altoview Terrace.

The school and daycare center has been closed since the outset of the COVID-19 pandemic locally.

Hudson said she was not sure, at this time, when it would reopen.

“Most of our clients are coming from John Graham Homes and those residents are not taking it (COVID-19) seriously at all,” she said. “They are out and about in groups.”

Housing Authority Chairwoman Lee Hight said the authority might be better off to keep the school closed for now because the cost of keeping it disinfected for small children and staff might be almost prohibitive.

Construction and Modernization Director Howard Gibson said the renovation of the Park Homes complex is nearing completion and framing for the new townhouse apartments on Charlton Street is now going up.

Roofing trusses on the Summerville Park development will start as soon as the weather permits.

The first site work related to the Altoview Terrace project — which will be known as Sandra D. Hudson Villas — is already underway.

The authority will take over management of 96 rental assistance demonstration units at Willingham Village on July 1. Those were the first public housing units that got a major facelift to convert to RAD units in Rome.

The authority partnered with Vantage, out of Northeast Alabama, on the renovation of those homes. When it takes over management, it will receive a fee of 6% of the gross revenue. Finance Director Felicia Redden said that should amount to approximately $36,000 a year. The revenue is considered nonfederal funds, which can be used for a variety of future projects.

Hudson also told the board she is working with Rome City Schools on a grant to provide WiFi service to as many as 200 housing units where students in the city system live.

“Even if they are back in school we can utilize funds that we received from HUD,” Hudson said. “We’re going to provide the funding for our kids to work from home, or if they go back to school they can still do their homework.”

The authority has approximately $200,000 left in a special CARES Act funding grant for the project. The money must be spent by the end of the year.

Some of the CARES Act money is also being allocated for special assistance to elderly residents of public housing units who are at risk for COVID-19. Hudson said they will get a bag with hand wash, masks, sanitizer and a gift card to Chick-fil-A.

Senior administrative assistant Dawn Booke wraps up the cheesy ham potato bakes to store in the fridge at the Kerry plant’s research and development kitchen Wednesday. Booke and other employees planned to deliver 100 meals to Restoration Rome.

Kerry Plant employees volunteered time out of their day to make 100 meals Wednesday in their research and development kitchen to donate to Restoration Rome for foster families.

Lindsey Ellerbee, an employee with the Kerry plant’s research and development department, measures out cheese for the cheesy ham potato bake dishes. The 100 meals will be donated to Restoration Rome to give to foster families.

Kerry plant research and development scientist Dilshad Akrayee opens a new bag of frozen potatoes to add to the cheesy ham potato bake. The meal is part of a food delivery to Restoration Rome to give to foster families on Wednesday.

Elliott Rank, an employee in the Kerry plant’s human resources department, pours rice into boiling water to begin preparing smothered chicken enchiladas. Plans were to deliver 100 meals to Restoration Rome to give to foster families.

Employees at the Kerry Ingredients and Flavours plant in Lindale spent their Wednesday putting together 100 take and bake meals to be donated to Restoration Rome.

Since opening, the plant has been partnering with local organizations to give back to the community. They also helped create the Kerry Kitchen at Restoration Rome, where foster kids can reconnect with their biological parents.

Last year Kerry employees spent a day there, cooking lasagna and spaghetti for foster families to help feed them for the night. However, according to human resources employee Elliott Rank, they had difficulty cooking large batches of food in the average-sized kitchen.

This year, they decided to move their cooking volunteer day to their own research and development kitchen to make 100 pans of take and bake meals for the families. They made 50 pans of two recipes: cheesy ham and potato bake and smothered chicken enchiladas.

“Basically what we’re doing is assembling, then it goes in a freezer. Then the families put it in their ovens for the final cooking,” Rank said.

Each department had volunteers coming into the kitchen to help prepare the meals. While assembling the pans, the employees wore masks and remained 6 feet apart as much as possible.

Booke planned to deliver the meals Wednesday night to Restoration Rome on Crane Street, for them to distribute to foster families.

Kerry employees also volunteer their time by taking part in Keep Rome-Floyd Beautiful’s Adopt-A-Mile program. They recently adopted Old Lindale Road, according to Booke, and make their way out to the road every three months to clean it up.

Booke, Rank and the rest of the Kerry employees hope to continue working with Restoration Rome and other county programs to help give back to the community.