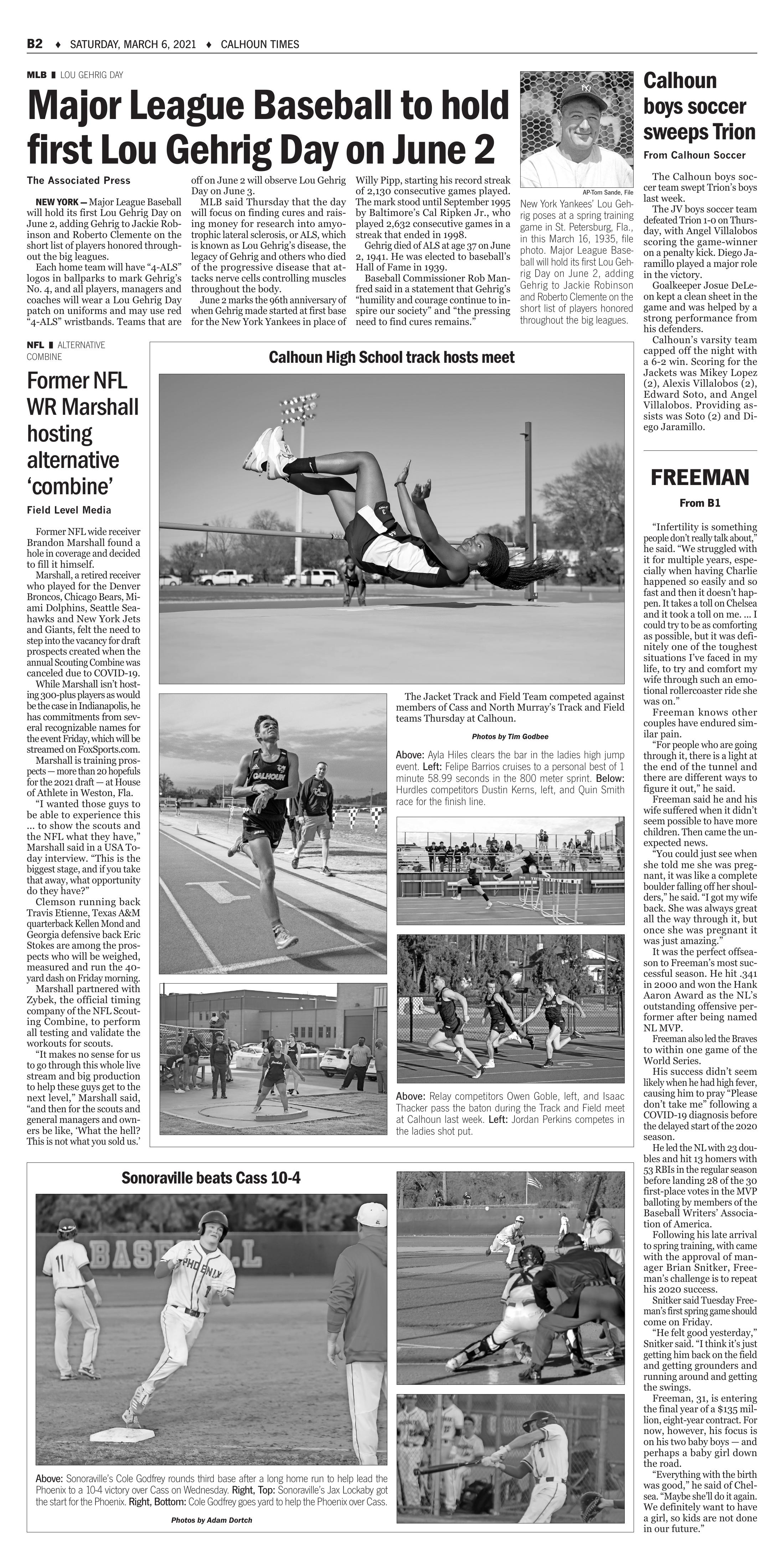 The JV boys soccer team defeated Trion 1-0 on Thursday, with Angel Villalobos scoring the game-winner on a penalty kick. Diego Jaramillo played a major role in the victory.

Goalkeeper Josue DeLeon kept a clean sheet in the game and was helped by a strong performance from his defenders.

Calhoun’s varsity team capped off the night with a 6-2 win. Scoring for the Jackets was Mikey Lopez (2), Alexis Villalobos (2), Edward Soto, and Angel Villalobos. Providing assists was Soto (2) and Diego Jaramillo.

Former NFL wide receiver Brandon Marshall found a hole in coverage and decided to fill it himself.

Marshall, a retired receiver who played for the Denver Broncos, Chicago Bears, Miami Dolphins, Seattle Seahawks and New York Jets and Giants, felt the need to step into the vacancy for draft prospects created when the annual Scouting Combine was canceled due to COVID-19.

While Marshall isn’t hosting 300-plus players as would be the case in Indianapolis, he has commitments from several recognizable names for the event Friday, which will be streamed on FoxSports.com.

Marshall is training prospects — more than 20 hopefuls for the 2021 draft — at House of Athlete in Weston, Fla.

“I wanted those guys to be able to experience this ... to show the scouts and the NFL what they have,” Marshall said in a USA Today interview. “This is the biggest stage, and if you take that away, what opportunity do they have?”

Clemson running back Travis Etienne, Texas A&M quarterback Kellen Mond and Georgia defensive back Eric Stokes are among the prospects who will be weighed, measured and run the 40-yard dash on Friday morning.

Marshall partnered with Zybek, the official timing company of the NFL Scouting Combine, to perform all testing and validate the workouts for scouts.

“It makes no sense for us to go through this whole live stream and big production to help these guys get to the next level,” Marshall said, “and then for the scouts and general managers and owners be like, ‘What the hell? This is not what you sold us.’

“We’re trying to continue this thing for years to come, and we went over it and want to make sure that when the scouts and general managers tune in, they’re getting the real, real.”

In addition to results confirmed by Zybek, Marshall hired a professional film crew to capture all workouts, which will be sent to every NFL team.