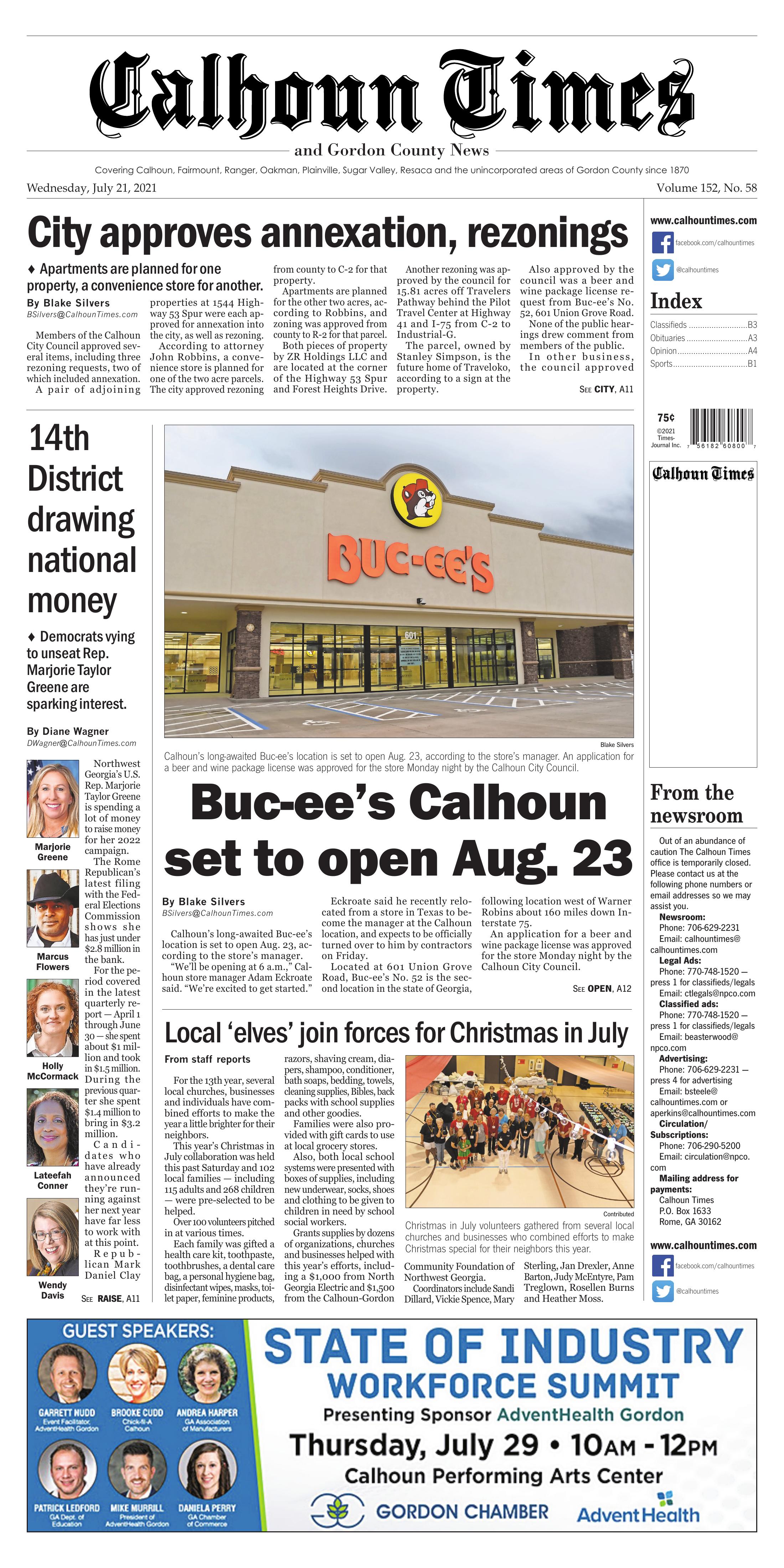 The annexation and rezoning from county to R-2 was approved for a two acre parcel of property on Forest Heights Drive. Apartments are planned for the site.

A rezoning was approved by the council for 15.81 acres off Travelers Pathway behind the Pilot Travel Center at Highway 41 and I-75 from C-2 to Industrial-G. The parcel, owned by Stanley Simpson, is the future home of Traveloko, according to a sign at the property.

A convenience store is planned for a two acre piece of property at the corner of Highway 53 Spur and Forest Heights Drive. The parcel was annexed into the city and rezones for commercial use.

A rezoning was approved by the council for 15.81 acres off Travelers Pathway behind the Pilot Travel Center at Highway 41 and I-75 from C-2 to Industrial-G. The parcel, owned by Stanley Simpson, is the future home of Traveloko, according to a sign at the property.

A pair of adjoining properties at 1544 Highway 53 Spur were each approved for annexation into the city, as well as rezoning.

According to attorney John Robbins, a convenience store is planned for one of the two acre parcels. The city approved rezoning from county to C-2 for that property.

Apartments are planned for the other two acres, according to Robbins, and zoning was approved from county to R-2 for that parcel.

Both pieces of property by ZR Holdings LLC and are located at the corner of the Highway 53 Spur and Forest Heights Drive.

Another rezoning was approved by the council for 15.81 acres off Travelers Pathway behind the Pilot Travel Center at Highway 41 and I-75 from C-2 to Industrial-G.

The parcel, owned by Stanley Simpson, is the future home of Traveloko, according to a sign at the property.

Also approved by the council was a beer and wine package license request from Buc-ee’s No. 52, 601 Union Grove Road.

In other business, the council approved Councilman Al Edwards as the city’s designated voting delegate for the annual GMA membership business meeting on Aug. 8.

The council also approved the requested homecoming parade permit from Calhoun City Schools for Thursday, Sept. 30 at 6 p.m., following the traditional route through town. That application is subject to approval from the Georgia Department of Transportation.

A request by the city telecommunications department to make 15 electronic items surplus for sale on GovDeals was also unanimously approved.

Monday, July 26 is the next scheduled meeting of the city council. That meeting is set for 7 p.m. at the Depot, 109 S. King St. That meeting will be open to the public.

All votes by the council were unanimous, but without Mayor Pro Tem Crowley who wasn’t present.

Calhoun’s long-awaited Buc-ee’s location is set to open Aug. 23, according to the store’s manager. An application for a beer and wine package license was approved for the store Monday night by the Calhoun City Council.

Located at 601 Union Grove Road, Buc-ee’s No. 52 is the second location in the state of Georgia, following location west of Warner Robins about 160 miles down Interstate 75.

One thing that makes Buc-ee’s different than most travel centers along the interstate is that large trucks aren’t allowed as the stores have no fueling points for semi trucks.

Calhoun’s long-awaited Buc-ee’s location is set to open Aug. 23, according to the store’s manager.

Eckroate said he recently relocated from a store in Texas to become the manager at the Calhoun location, and expects to be officially turned over to him by contractors on Friday.

Located at 601 Union Grove Road, Buc-ee’s No. 52 is the second location in the state of Georgia, following location west of Warner Robins about 160 miles down Interstate 75.

An application for a beer and wine package license was approved for the store Monday night by the Calhoun City Council.

The process for the 53,000 square foot store started back in 2019 with a land exchange approval and zoning through the Gordon County Commission and Calhoun City Council.

A portion of Johnson Lake Road was moved during construction to meet up with Belwood Road in order make room for the store, and a traffic light recently began operation at that intersection.

Headquartered in Lake Jackson, Texas, Buc-ee’s was founded in 1982 and has locations in Texas, Alabama and Georgia with other stores planned or under development in North Carolina, South Carolina and Florida.

The chain’s largest location is currently a nearly 68,000 square foot travel center in New Braunfels, Texas that has 120 gas pumps and 1,000 parking spaces. It’s not only the largest Buc-ee’s location, but is also considered the largest gas station and convenience store in the world.

One thing that makes Buc-ee’s different than most travel centers along the interstate is that large trucks aren’t allowed as the stores have no fueling points for semi trucks.

Christmas in July volunteers gathered from several local churches and businesses who combined efforts to make Christmas special for their neighbors this year.

Christmas in July items to be donated to more than 100 local families include backpacks filled with age-appropriate school supplies.

For the 13th year, several local churches, businesses and individuals have combined efforts to make the year a little brighter for their neighbors.

This year’s Christmas in July collaboration was held this past Saturday and 102 local families — including 115 adults and 268 children — were pre-selected to be helped.

Over 100 volunteers pitched in at various times.

Families were also provided with gift cards to use at local grocery stores.

Also, both local school systems were presented with boxes of supplies, including new underwear, socks, shoes and clothing to be given to children in need by school social workers.

Grants supplies by dozens of organizations, churches and businesses helped with this year’s efforts, including a $1,000 from North Georgia Electric and $1,500 from the Calhoun-Gordon Community Foundation of Northwest Georgia.

Northwest Georgia’s U.S. Rep. Marjorie Taylor Greene is spending a lot of money to raise money for her 2022 campaign.

The Rome Republican’s latest filing with the Federal Elections Commission shows she has just under $2.8 million in the bank.

For the period covered in the latest quarterly report — April 1 through June 30 — she spent about $1 million and took in $1.5 million. During the previous quarter she spent $1.4 million to bring in $3.2 million.

Candidates who have already announced they’re running against her next year have far less to work with at this point.

Four Democrats also have active campaigns registered with the FEC.

Marcus Flowers, a veteran from Bremen, was in the financial lead with $234,578 on hand as of March 31. He had not yet filed his June 30 report, which was due Thursday.

Holly McCormack of Ringgold has raised nearly $250,000 since she declared her candidacy in the first quarter of the year. She reported a total of $60,010 in the bank as of June 30.

Lateefah B. Conner of Dallas had $26,335 in her campaign fund at the end of March and had not yet filed her second quarter report.

It is one of the most heavily Republican districts in the state, although the Georgia General Assembly is slated to redraw the voting maps this fall when 2020 census numbers are released.

Greene’s reported activity over the past few months shows a candidate criss-crossing the country to raise funds.

She’s also spent tens of thousands of dollars with Facebook for virtual events and with a New Jersey-based mobile messaging firm. Mudshare taps into data generated by mobile devices and apps to identify potentially receptive consumers and their habits. It then contacts them through social media, texts, automated phone calls and emails.

Travel also accounts for a large part of Greene’s expenditures. There are numerous payments for commercial air flights, Ubers, hotel rooms and meals. While the bulk of the receipts are for typical costs, with flights and rooms in the $100 to $200 range, several trips to Florida were pricier.

Greene also spent $5,868 at Morton’s on April 22, and made three payments of $384 each for rooms at the West Palm Beach Courtyard by Marriott on April 24.

Greene’s donors were from almost every state in the nation and many of them made monthly contributions. Of the hundreds reported in her second quarter filing, 36 of them were from the 14th District and a majority of those were women.

Davis’ first filing shows more than two-thirds of her contributions came from Georgia — and at least half of that from people within the 14th District.

She’s a member of the Democratic National Committee and also drew support from relationships she’s developed there during her years as a political consultant. She also added a personal loan of just under $5,000.

Most of Davis’ expenses were payments to NGP VAN, a voter database and web hosting service provider used by the Democratic Party, and Act Blue, an online fundraising site also used by the party.

Through the Act Blue site, McCormack drew contributions from numerous states, including Georgia, but few from within the district. A big bump of $1,000 came from a group called Downballot Dems based in Paulding County.

An $1,800 payment went to The Campaign School at Yale University for candidate training. McCormack also spent a total of $3,090 for lodging at the Mainstay Suites in Chattanooga, Tennessee, on six occasions in May and June.