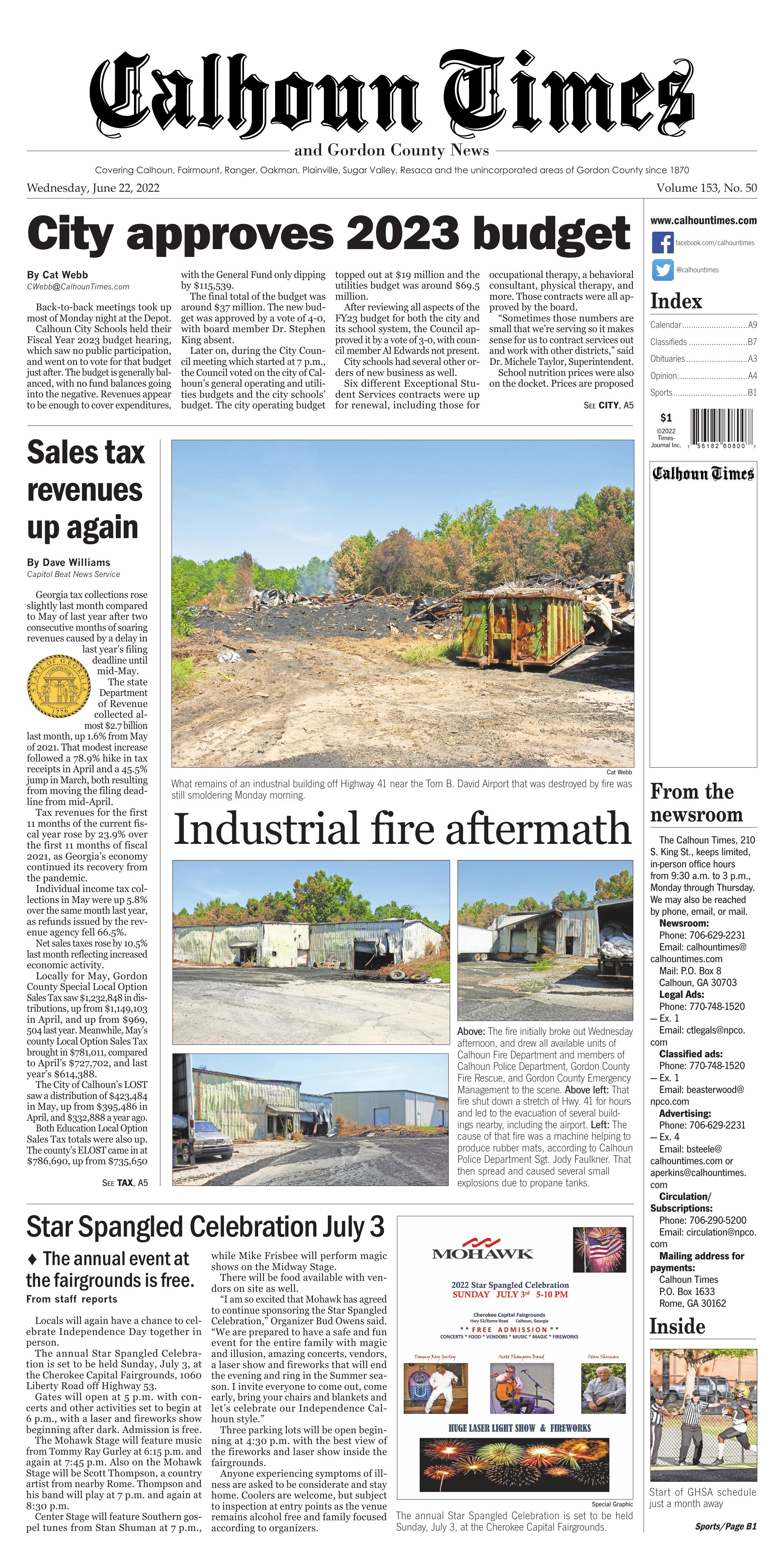 The City of Calhoun voted to approve its Fiscal Year 2023 budget Monday, 3-0.

Back-to-back meetings took up most of Monday night at the Depot.

Calhoun City Schools held their Fiscal Year 2023 budget hearing, which saw no public participation, and went on to vote for that budget just after. The budget is generally balanced, with no fund balances going into the negative. Revenues appear to be enough to cover expenditures, with the General Fund only dipping by $115,539.

The final total of the budget was around $37 million. The new budget was approved by a vote of 4-0, with board member Dr. Stephen King absent.

Later on, during the City Council meeting which started at 7 p.m., the Council voted on the city of Calhoun’s general operating and utilities budgets and the city schools’ budget. The city operating budget topped out at $19 million and the utilities budget was around $69.5 million.

After reviewing all aspects of the FY23 budget for both the city and its school system, the Council approved it by a vote of 3-0, with council member Al Edwards not present.

City schools had several other orders of new business as well.

“Sometimes those numbers are small that we’re serving so it makes sense for us to contract services out and work with other districts,” said Dr. Michele Taylor, Superintendent.

School nutrition prices were also on the docket. Prices are proposed to increase by $0.25 per meal for the 2022-23 school year to cover a 30% increase in food costs.

“We still have a very low price for our school meals, for student meals, and adult lunches,” Taylor said. “So we’ll continue to try and keep those prices low, but sometimes it’s dictated by food cost.”

Meal prices had previously not changed since 2014. The measure was approved.

The Board also voted on a contract renewal with Edgenuity for their online learning curriculum. The total cost is $49,700, and that renewal was approved. Also up for renewal was Infinite Campus, which is a piece of student information software. The renewal is $43,991.50, and was approved.

As for upcoming events, preplanning begins on August 1 and the first day of school is August 4.

The City Council also got through several orders of old and new business.

Several second readings took place, all of which will be further addressed at the Zoning Advisory Board meeting on July 7 and at public hearings on July 11.

Annexation and zoning requests include:

Another second reading also looked at a zoning change request from Olga Lopez, to change 457 West Line Street (C11-0225) from C-2 to R1-B.

The council also voted on a couple orders of new business.

They also voted on a resolution regarding amendments to the City General Government and Utilities Rate Resolutions.

“A lot of these items clarify temporary changes in rates and transactions that we need for recovering costs and revenues for operating utilities,” said utilities administrator Larry Vickery. “Also there is some construction cost considerations that have been added across the board.”

There were several changes in those amendments, including:

♦ continued the 3% increase to water and sewer rates

♦ added a cost recovery/electrical point of service fee of 15% of the cost of transformers needed for commercial or industrial customers’ service, and

“Some of the things on the fire inspection side have not been raised in many, many years, so I feel like this is needed to help cover some of our inspection costs,” said city administrator Paul Worley.

Those changes were approved by the council.

is set to be held Sunday, July 3, at the Cherokee Capital Fairgrounds.

Locals will again have a chance to celebrate Independence Day together in person.

The annual Star Spangled Celebration is set to be held Sunday, July 3, at the Cherokee Capital Fairgrounds, 1060 Liberty Road off Highway 53.

Gates will open at 5 p.m. with concerts and other activities set to begin at 6 p.m., with a laser and fireworks show beginning after dark. Admission is free.

Center Stage will feature Southern gospel tunes from Stan Shuman at 7 p.m., while Mike Frisbee will perform magic shows on the Midway Stage.

There will be food available with vendors on site as well.

“I am so excited that Mohawk has agreed to continue sponsoring the Star Spangled Celebration,” Organizer Bud Owens said. “We are prepared to have a safe and fun event for the entire family with magic and illusion, amazing concerts, vendors, a laser show and fireworks that will end the evening and ring in the Summer season. I invite everyone to come out, come early, bring your chairs and blankets and let’s celebrate our Independence Calhoun style.”

Three parking lots will be open beginning at 4:30 p.m. with the best view of the fireworks and laser show inside the fairgrounds.

Anyone experiencing symptoms of illness are asked to be considerate and stay home. Coolers are welcome, but subject to inspection at entry points as the venue remains alcohol free and family focused according to organizers. 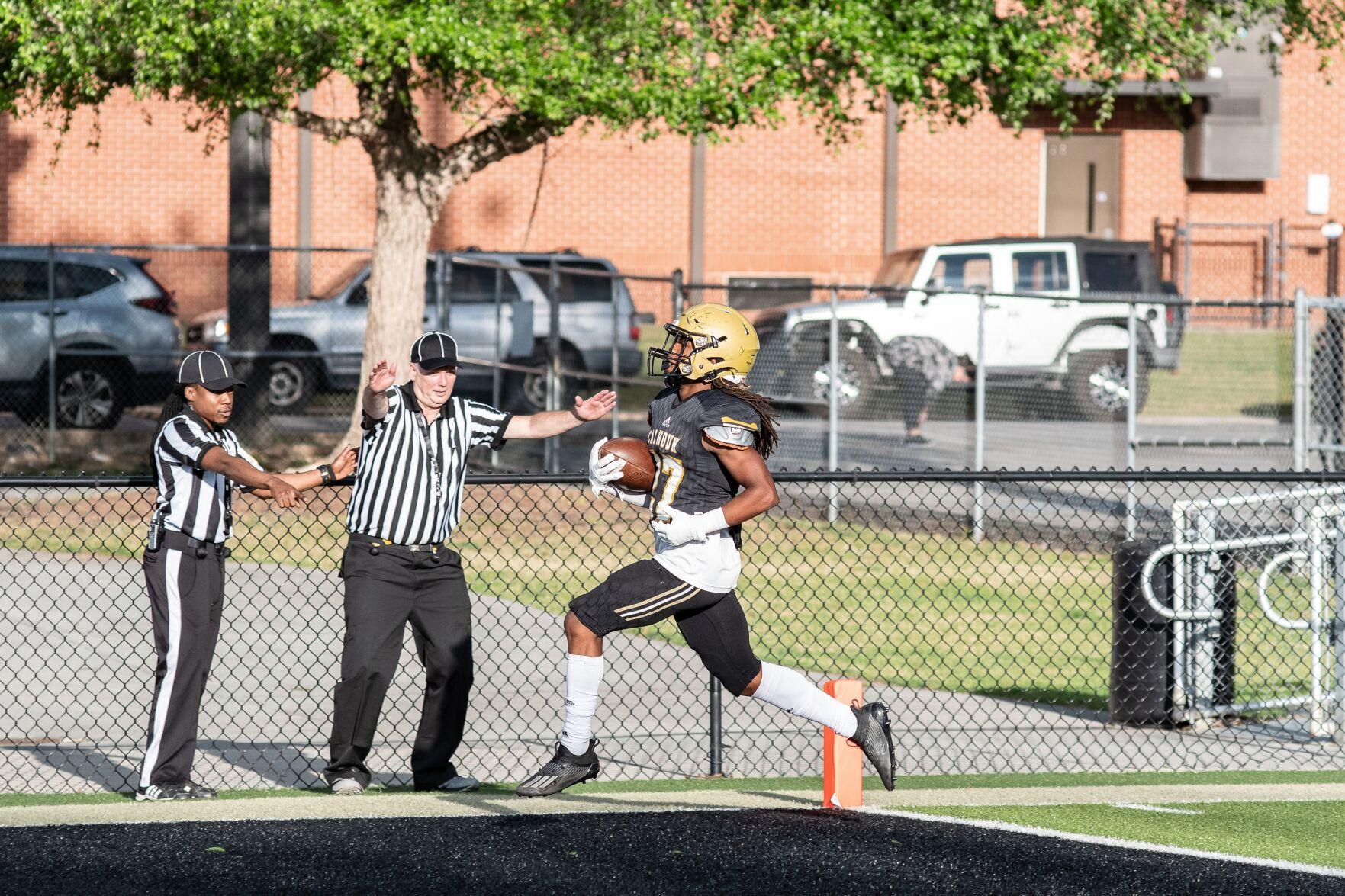 The start of the high school football, volleyball, and softball practice schedule is just a month away from student-athletes at Calhoun, Sonoraville, and Gordon Central.

The state Department of Revenue collected almost $2.7 billion last month, up 1.6% from May of 2021. That modest increase followed a 78.9% hike in tax receipts in April and a 45.5% jump in March, both resulting from moving the filing deadline from mid-April.

Individual income tax collections in May were up 5.8% over the same month last year, as refunds issued by the revenue agency fell 66.5%.

Back to statewide totals, corporate income taxes, typically more volatile than individual income or sales taxes, increased by 53.8% in May. Corporate tax payments were up by 138.9%, while refunds declined by 42.8%.

State gasoline tax revenues fell nearly 100%, a result of the General Assembly’s passage of legislation in March temporarily suspending collection of the tax to help dent rising prices at the pump.