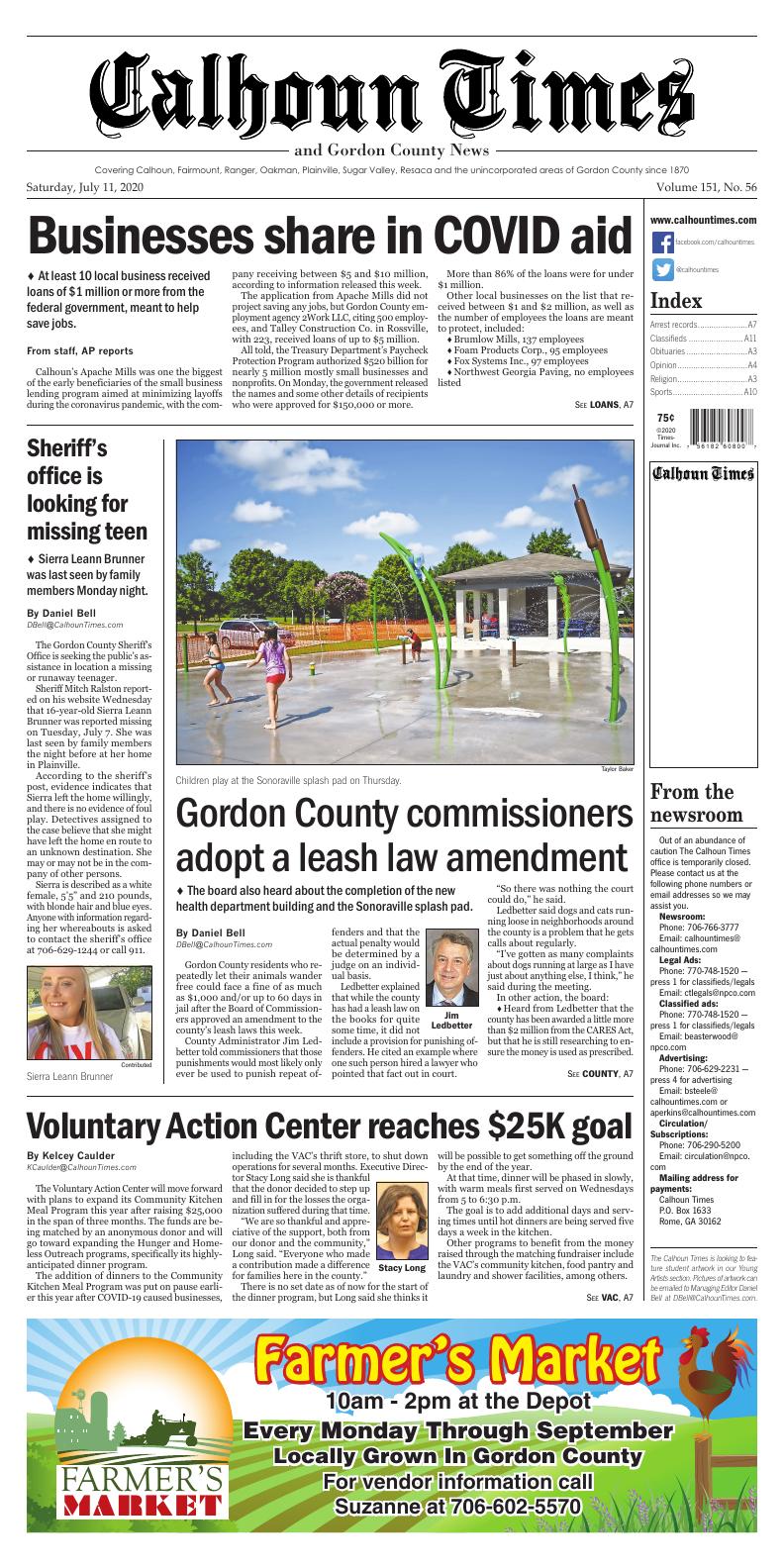 Apache Mills is located on South River Street in Calhoun.

Calhoun’s Apache Mills was one the biggest of the early beneficiaries of the small business lending program aimed at minimizing layoffs during the coronavirus pandemic, with the company receiving between $5 and $10 million, according to information released this week.

The application from Apache Mills did not project saving any jobs, but Gordon County employment agency 2Work LLC, citing 500 employees, and Talley Construction Co. in Rossville, with 223, received loans of up to $5 million.

All told, the Treasury Department’s Paycheck Protection Program authorized $520 billion for nearly 5 million mostly small businesses and nonprofits. On Monday, the government released the names and some other details of recipients who were approved for $150,000 or more.

Other local businesses on the list that received between $1 and $2 million, as well as the number of employees the loans are meant to protect, included:

The specific amount of the award is not listed but Marglen Industries and Shorter University in Floyd County are in the category of recipients getting somewhere between $2 million and $5 million. Marglen sought to preserve 198 jobs and Shorter’s application noted 403 positions.

Foss Manufacturing Co. in Rome, with 229 employees at risk, also fell into that category.

Among the companies in surrounding counties were Surya Carpet, Aquafil USA and Taylor Transport in Bartow County — with 250, 296 and 240 employees respectively.

The program, passed hurriedly by Congress in March, was designed to provide small firms with loans of as much as $10 million, based on a company’s average monthly payroll before the pandemic. The loans can become grants if borrowers use the proceeds mostly to pay workers — with some spending allowed for rent and overhead costs.

Almost from the beginning, the PPP was dogged by controversy as some publicly traded firms tapped it. Many returned PPP loans after their borrowing drew criticism. The program’s supporters say it has kept tens of millions of workers employed during the pandemic and contributed to the surprising 2.5 million U.S. jobs added in May, with an additional 4.8 million jobs in June.

One other company in the surrounding area received a loan of between $5 million and $10 million.

News reports on the program have disclosed that members of Congress have taken or benefited from PPP loans, as well as firms that have reported significant revenue, closed facilities or filed for bankruptcy protection after getting PPP assistance.

Reports that entities such as Shake Shack Inc. and the Los Angeles Lakers got loans ahead of mom-and-pop borrowers prompted those two and others to return their loans. The recipient list released Monday includes Kanye West’s clothing line, the sculptor Jeff Koons, law firms and high-dollar hedge funds, the Girl Scouts and political groups on both the left and right.

The initial public outcry spurred the Trump administration to promise to review all loans greater than $2 million and to tell companies that had access to other sources of capital that they likely didn’t qualify for the bailout program.

More than 30 companies in Northwest Georgia received loans of up to $2 million in the first round of awards, including the Calhoun Times’ parent company, Times-Journal Inc., which aims to save 183 jobs.

California, Florida, Texas, New York and Illinois had the largest numbers of loans and the most in dollar amount approved, data show.

Overall, companies in the health care and social assistance industry accounted for the largest amount in loans at $67.4 billion, followed by professional, scientific and technical services firms at $66.4 billion; construction at $64.6 billion; manufacturing at $54 billion; and accommodation and food services at $42.1 billion.

The disclosures came after members of Congress and others voiced concern about the level of transparency surrounding the PPP.

The list posted Monday amounted to fewer than 15% of all borrowers. The Associated Press and other news organizations are suing the government to obtain the names of the remaining recipients.

Children play at the Sonoraville splash pad on Thursday.

The new Gordon County Health Department building is complete, and work on the parking lot should wrap up soon.

Gordon County residents who repeatedly let their animals wander free could face a fine of as much as $1,000 and/or up to 60 days in jail after the Board of Commissioners approved an amendment to the county’s leash laws this week.

County Administrator Jim Ledbetter told commissioners that those punishments would most likely only ever be used to punish repeat offenders and that the actual penalty would be determined by a judge on an individual basis.

Ledbetter explained that while the county has had a leash law on the books for quite some time, it did not include a provision for punishing offenders. He cited an example where one such person hired a lawyer who pointed that fact out in court.

“So there was nothing the court could do,” he said.

Ledbetter said dogs and cats running loose in neighborhoods around the county is a problem that he gets calls about regularly.

“I’ve gotten as many complaints about dogs running at large as I have just about anything else, I think,” he said during the meeting.

In other action, the board:

Heard from Ledbetter that the county has been awarded a little more than $2 million from the CARES Act, but that he is still researching to en♦ sure the money is used as prescribed.

♦ Heard that the Sonoraville splash pad is operational and unofficially open. Ledbetter said they are waiting on the sod to take hold before having an official opening, likely on July 18. Also, the county will be working with Keep Calhoun Gordon Beautiful to add additional landscaping to the area around the splash pad.

♦ Head that the new health department building is complete, but that the new parking lot has not been finished because of soil concerns on the space where the old building had been located. The county brought in additional material to shore up the plot and paving should be wrapped up soon.

♦ Denied a variance application from Blue Hill Farm on Dews Pond Road. Owner Xuan Hoang had applied for variance that would have allowed him to build a stack house on his chicken farm closer to an adjacent property than normally allowed. It was discovered during the meeting, however, that Hoang doesn’t actually intend to build a stack house, which is a structure that houses chicken waste or dead animals, but instead a pole barn to cover sawdust or other dry materials for lined the floor of the chicken houses. Such a structure would not require a variance.

♦ Approved the hiring of five new firefighters to fill vacant spots created by three retirements and two departures. Additionally, the board OK’d a paid-per-call class to help train volunteer firefighters.

The Voluntary Action Center is located on South Wall Street.

The Voluntary Action Center will move forward with plans to expand its Community Kitchen Meal Program this year after raising $25,000 in the span of three months. The funds are being matched by an anonymous donor and will go toward expanding the Hunger and Homeless Outreach programs, specifically its highly-anticipated dinner program.

The addition of dinners to the Community Kitchen Meal Program was put on pause earlier this year after COVID-19 caused businesses, including the VAC’s thrift store, to shut down operations for several months. Executive Director Stacy Long said she is thankful that the donor decided to step up and fill in for the losses the organization suffered during that time.

“We are so thankful and appreciative of the support, both from our donor and the community,” Long said. “Everyone who made a contribution made a difference for families here in the county.”

There is no set date as of now for the start of the dinner program, but Long said she thinks it will be possible to get something off the ground by the end of the year.

At that time, dinner will be phased in slowly, with warm meals first served on Wednesdays from 5 to 6:30 p.m.

The goal is to add additional days and serving times until hot dinners are being served five days a week in the kitchen.

Other programs to benefit from the money raised through the matching fundraiser include the VAC’s community kitchen, food pantry and laundry and shower facilities, among others.

In 2019, the food pantry provided 2,926 families with food bags, feeding 6,980 individuals. The community kitchen served 30,421 hot meals in the same year. The shower and laundry facilities were utilized 352 and 485 times respectively.

“We’re so excited about this. We’ve been talking about it for almost three years,” Long said. “It has taken a lot of planning and saving and coordinating to get to this point, but we are thrilled to offer what we do and to add to that when we can.”

The Voluntary Action Center thrift store is open for business Monday through Saturday from 9 a.m. until 4:30 p.m.

The Gordon County Sheriff’s Office is seeking the public’s assistance in location a missing or runaway teenager.

Sheriff Mitch Ralston reported on his website Wednesday that 16-year-old Sierra Leann Brunner was reported missing on Tuesday, July 7. She was last seen by family members the night before at her home in Plainville.

According to the sheriff’s post, evidence indicates that Sierra left the home willingly, and there is no evidence of foul play. Detectives assigned to the case believe that she might have left the home en route to an unknown destination. She may or may not be in the company of other persons.

Sierra is described as a white female, 5’5” and 210 pounds, with blonde hair and blue eyes. Anyone with information regarding her whereabouts is asked to contact the sheriff’s office at 706-629-1244 or call 911. 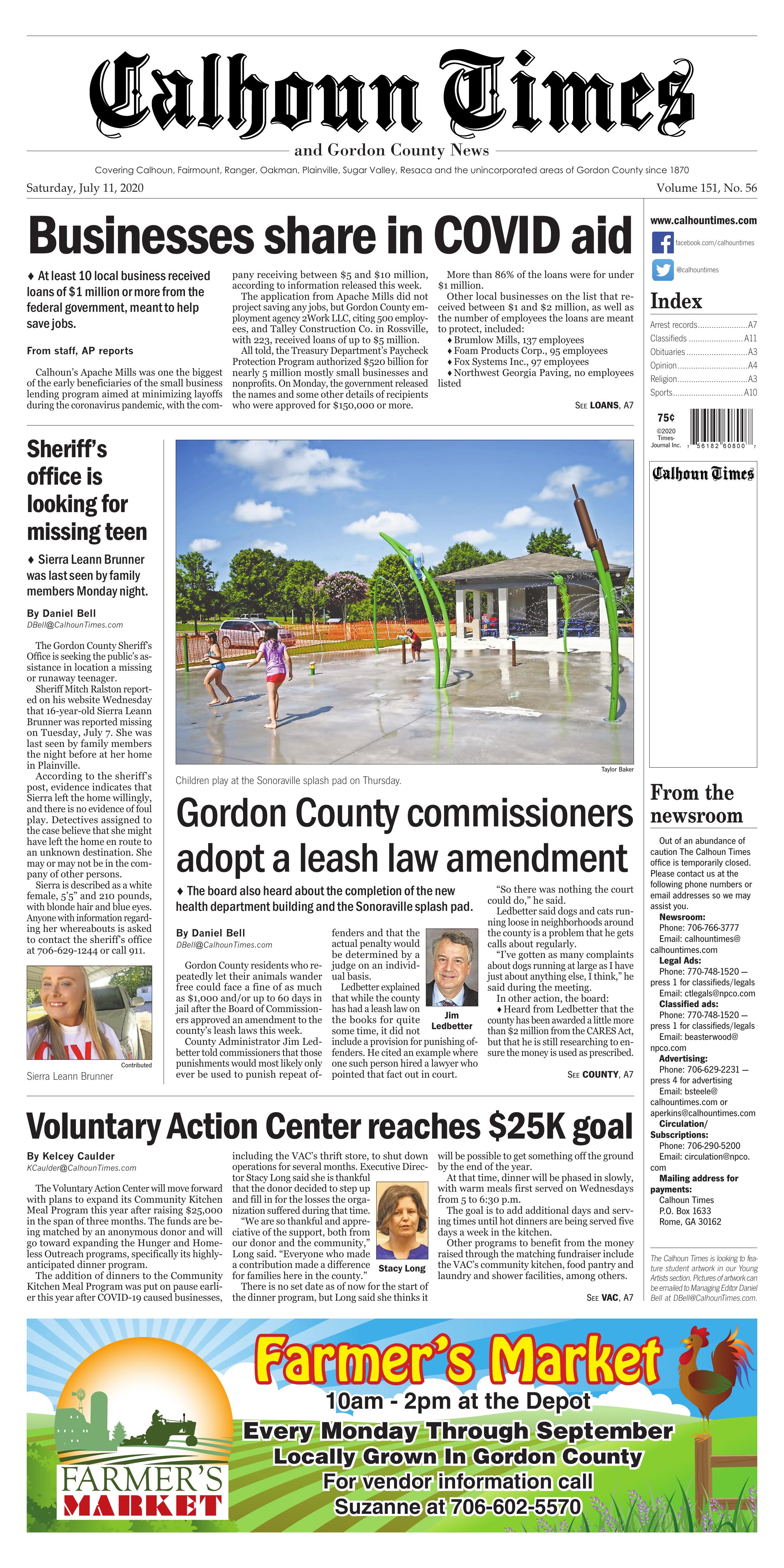