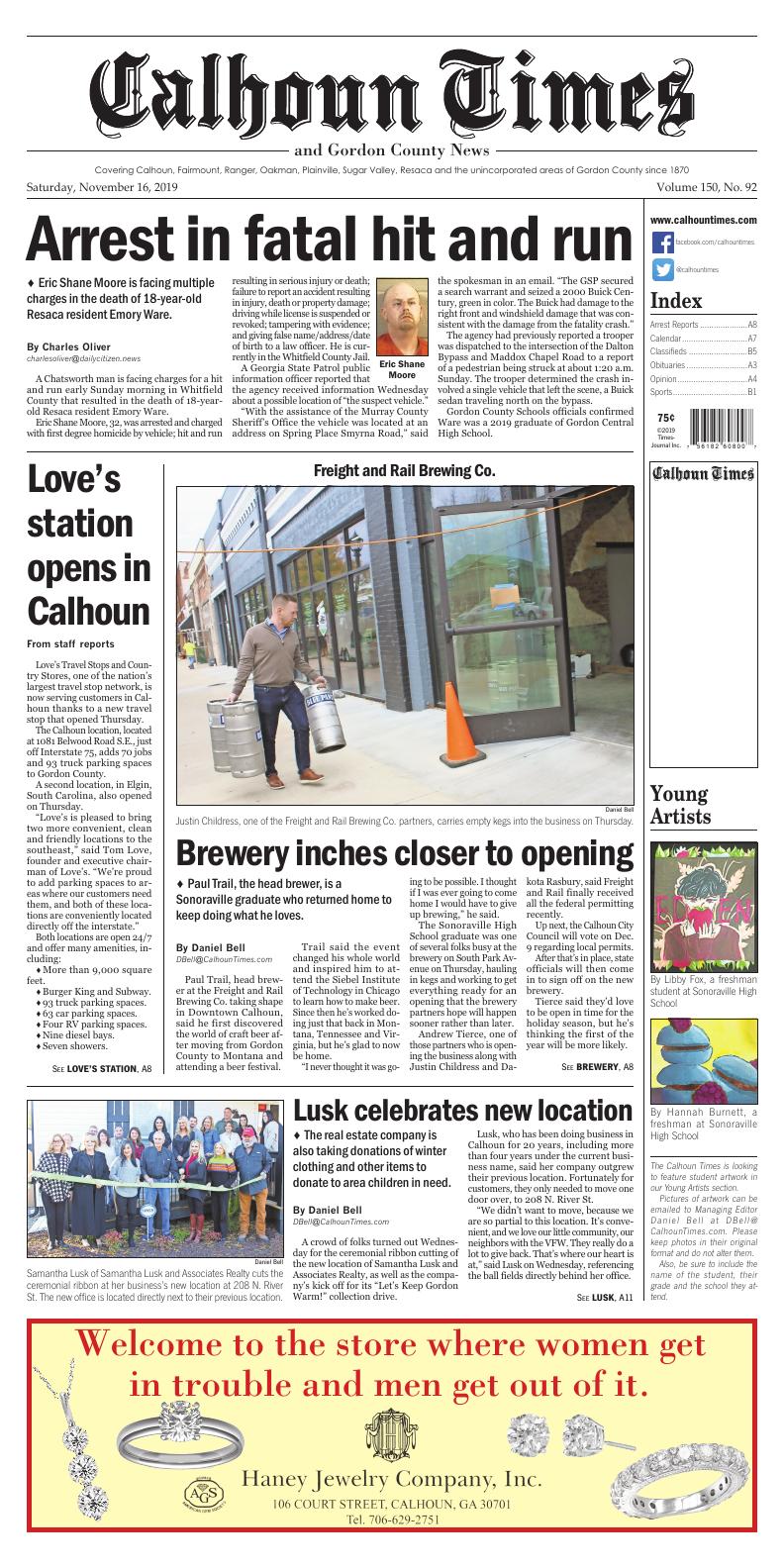 A Chatsworth man is facing charges for a hit and run early Sunday morning in Whitfield County that resulted in the death of 18-year-old Resaca resident Emory Ware.

Eric Shane Moore, 32, was arrested and charged with first degree homicide by vehicle; hit and run resulting in serious injury or death; failure to report an accident resulting in injury, death or property damage; driving while license is suspended or revoked; tampering with evidence; and giving false name/address/date of birth to a law officer. He is currently in the Whitfield County Jail.

A Georgia State Patrol public information officer reported that the agency received information Wednesday about a possible location of “the suspect vehicle.”

“With the assistance of the Murray County Sheriff’s Office the vehicle was located at an address on Spring Place Smyrna Road,” said the spokesman in an email. “The GSP secured a search warrant and seized a 2000 Buick Century, green in color. The Buick had damage to the right front and windshield damage that was consistent with the damage from the fatality crash.”

The agency had previously reported a trooper was dispatched to the intersection of the Dalton Bypass and Maddox Chapel Road to a report of a pedestrian being struck at about 1:20 a.m. Sunday. The trooper determined the crash involved a single vehicle that left the scene, a Buick sedan traveling north on the bypass.

Justin Childress, one of the Freight and Rail Brewing Company partners, carries empty kegs into the business.

Freight and Rail Brewing Co. brought in $190,000 worth of brewing equipment to Downtown Calhoun.

The bar inside Freight and Rail Brewing Co. is constructed of railroad ties and rails.

Paul Trail, head brewer at the Freight and Rail Brewing Co. taking shape in Downtown Calhoun, said he first discovered the world of craft beer after moving from Gordon County to Montana and attending a beer festival.

Trail said the event changed his whole world and inspired him to attend the Siebel Institute of Technology in Chicago to learn how to make beer. Since then he’s worked doing just that back in Montana, Tennessee and Virginia, but he’s glad to now be home.

“I never thought it was going to be possible. I thought if I was ever going to come home I would have to give up brewing,” he said.

The Sonoraville High School graduate was one of several folks busy at the brewery on South Park Avenue on Thursday, hauling in kegs and working to get everything ready for an opening that the brewery partners hope will happen sooner rather than later.

Andrew Tierce, one of those partners who is opening the business along with Justin Childress and Dakota Rasbury, said Freight and Rail finally received all the federal permitting recently.

Up next, the Calhoun City Council will vote on Dec. 9 regarding local permits.

After that’s in place, state officials will then come in to sign off on the new brewery.

Tierce said they’d love to be open in time for the holiday season, but he’s thinking the first of the year will be more likely.

The brewery will open with 12 taps, offering a wide variety of locally crafted brews. The company has about $190,000 worth of brewing equipment in place, including five-barrel and one-barrel setups.

”That’s kind of what it takes though,” Tierce said. “The thing we kept asking ourselves was, ‘will this detract from the quality of the beer?’ We didn’t want to take shortcuts. We wanted to do it right.”

A barrel contains 31.5 gallons, so Trail will have the option of batch sizes depending on demand, and Tierce said the plan is to allow customers to decide what sort of beers they make.

”We’re going to let our customers tell us that,” he said, adding that craft beer fans typically journey in their preferences from style to style. “The thing is, I don’t want anything to come out of the tap that I wouldn’t drink.”

For his part, Trail said he enjoys making lagers and pilsners.

”You really have to know what you are doing to get those right. It’s challenging, but those are fun,” Trail said.

Tierce noted that California, which has typically been the birthplace for new craft beer trends, is seeing a boom in both of those styles right now, and he expects that wave to eventually head east. Those kind of beers also make it easier for beer drinkers to transition to craft choices, he said, because most of the big brand beer companies rely heavily on lagers and pilsners.

That said, Freight and Rail will offer a wide range of styles.

”A lot of the fun comes from trying different stuff,” Tierce said.

The Freight and Rail Brewing Company is currently under construction at the corner of South Park Avenue and Oothcalooga Street. In addition to a large bar constructed from railroad ties and rails, the space will include a stage for live performances.

Samantha Lusk of Samantha Lusk and Associates Realty cuts the ceremonial ribbon at her business’s new location at 208 N. River St. The new office is located directly next to their previous location.

A crowd of folks turned out Wednesday for the ceremonial ribbon cutting of the new location of Samantha Lusk and Associates Realty, as well as the company’s kick off for its “Let’s Keep Gordon Warm!” collection drive.

Lusk, who has been doing business in Calhoun for 20 years, including more than four years under the current business name, said her company outgrew their previous location. Fortunately for customers, they only needed to move one door over, to 208 N. River St.

“We didn’t want to move, because we are so partial to this location. It’s convenient, and we love our little community, our neighbors with the VFW. They really do a lot to give back. That’s where our heart is at,” said Lusk on Wednesday, referencing the ball fields directly behind her office.

The house that now serves as the business’s home had been targeted for demolition, but Lusk and her company conducted a lot of renovations to make room for the company’s 17 employees and guests.

“I love that people can just stop by,” Lusk said.

Until next Friday, Nov. 22, the company will be taking item and monetary donations to help make sure all those needs on the wish lists are met.

Lusk is working with Michelle Queen, her friend and fellow Realtor who organizes a similar event in Bartow County. She said donations can be dropped off at their new location until the event ends.

“We’ll take the items or the monetary donations and check off the items on those lists. But even if we don’t get enough donations, we’ll make sure all those lists are taken care of,” Lusk said.

The new Love’s Travel Stops and Country Stores location in Calhoun is located at 1081 Belwood Road S.E., just off Interstate 75.

Love’s Travel Stops and Country Stores, one of the nation’s largest travel stop network, is now serving customers in Calhoun thanks to a new travel stop that opened Thursday.

“Love’s is pleased to bring two more convenient, clean and friendly locations to the southeast,” said Tom Love, founder and executive chairman of Love’s. “We’re proud to add parking spaces to areas where our customers need them, and both of these locations are conveniently located directly off the interstate.”

Both locations are open 24/7 and offer many amenities, including:

♦ Mobile to Go Zone with the latest electronics.

In honor of the grand opening, Love’s will host a ribbon cutting ceremony at each location. Love’s will also donate $2,000 to Belwood Elementary School in Calhoun. 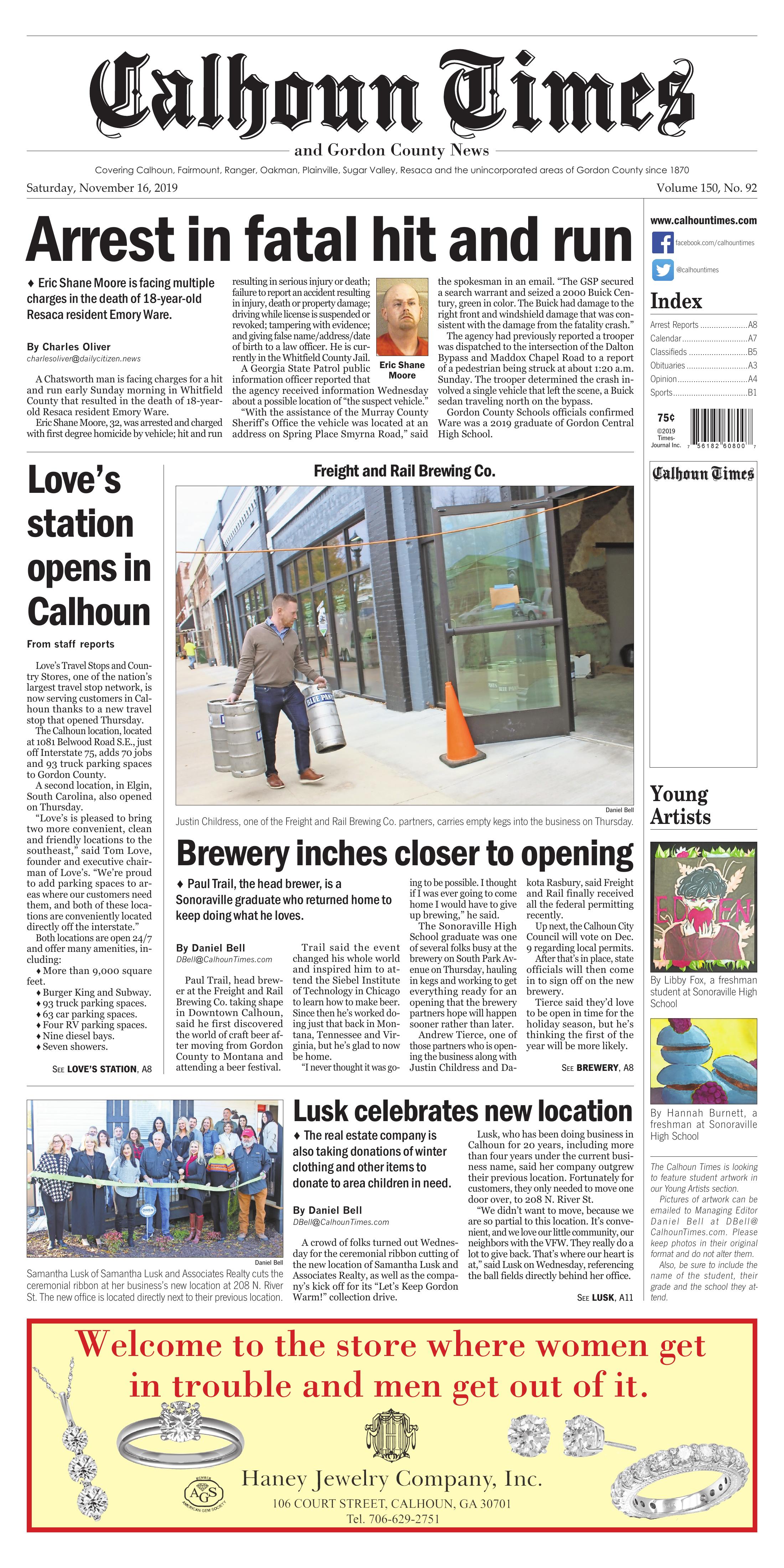