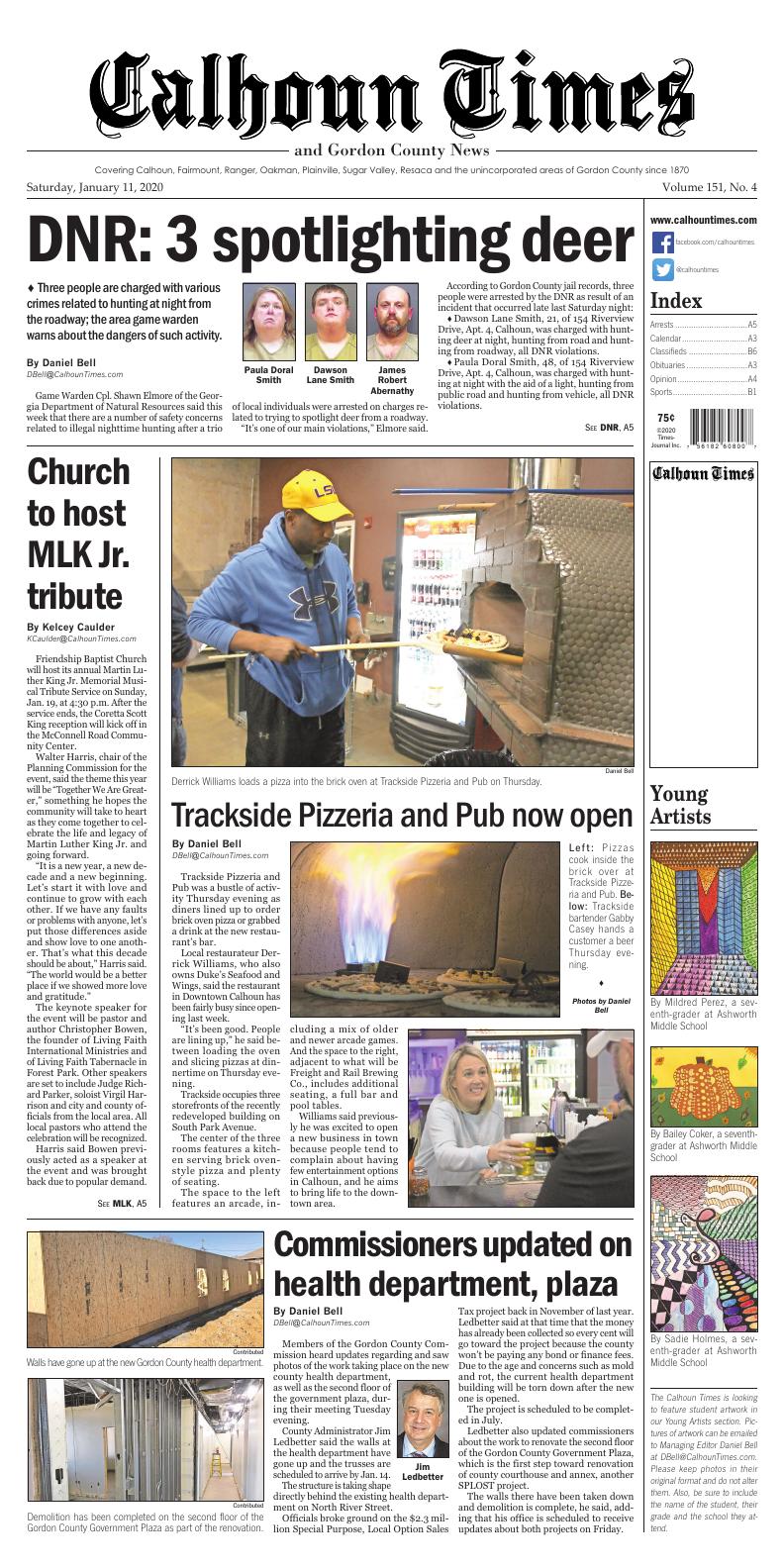 Game Warden Cpl. Shawn Elmore of the Georgia Department of Natural Resources said this week that there are a number of safety concerns related to illegal nighttime hunting after a trio of local individuals were arrested on charges related to trying to spotlight deer from a roadway.

“It’s one of our main violations,” Elmore said.

According to Gordon County jail records, three people were arrested by the DNR as result of an incident that occurred late last Saturday night:

♦ Paula Doral Smith, 48, of 154 Riverview Drive, Apt. 4, Calhoun, was charged with hunting at night with the aid of a light, hunting from public road and hunting from vehicle, all DNR violations.

♦ James Robert Abernathy, 42, of 750 Towe Chapel Road, Adairsville, was charged with hunting at night with light, hunting from road and hunting from vehicle, all DNR violations.

According to the written DNR report, Abernathy told officers he had been cited on similar charges multiple times before, and both he and Dawson Smith are both convicted felons who are barred from possessing firearms. Reports indicate warrants are being taken out for possession of a firearm by a convicted felon for those two people.

Game wardens were working the area of McGill Mountain Road in Southeast Gordon County when they noticed a vehicle moving slowly along the road and two separate lights shining from both sides of the vehicle into surrounding fields. Officers observed the vehicle travel a distance down the road and then turn around as the lights continued to shine onto the fields.

The vehicle was then stopped, and officers found a loaded Mossberg .30-06 in between the driver and passenger seats. All three people in the vehicle were arrested and taken to Gordon County jail.

Per state law, said Elmore, hunting is only permitted from 30 minutes before sunrise until 30 minutes after sunset. And while the charges related to illegal hunting are misdemeanors, they carry potentially heavy fines and a two year suspension of hunting privileges.

Besides being illegal, the game warden also spoke about the related dangers of such activity, noting that someone firing a gun at night can’t see what is beyond their target. He said they’ve had incidents in Northwest Georgia where both homes and livestock have been hit by gunfire related to illegal nighttime hunting.

Elmore attributed it to luck that during his 20 years of service that no person in his region inside a home has ever been struck as a result of an errant gunshot, but he noted that it has happened elsewhere.

Derrick Williams loads a pizza into the brick oven at Trackside Pizzeria and Pub on Thursday.

Pizzas cook inside the brick over at Trackside Pizzeria and Pub.

Trackside Pizzeria and Pub offers a variety of arcade-style games.

Pizzas are made fresh to order.

Trackside Pizzeria and Pub was a bustle of activity Thursday evening as diners lined up to order brick oven pizza or grabbed a drink at the new restaurant’s bar.

“It’s been good. People are lining up,” he said between loading the oven and slicing pizzas at dinnertime on Thursday evening.

The center of the three rooms features a kitchen serving brick oven-style pizza and plenty of seating.

The space to the left features an arcade, including a mix of older and newer arcade games. And the space to the right, adjacent to what will be Freight and Rail Brewing Co., includes additional seating, a full bar and pool tables.

Williams said previously he was excited to open a new business in town because people tend to complain about having few entertainment options in Calhoun, and he aims to bring life to the downtown area.

Walls have gone up at the new Gordon County health department building.

Another view of the progress at the site of the new Gordon County Health Department.

Demolition has been completed on the second floor of the Gordon County Government Plaza as part of the renovation of the floor.

The floors and many of the walls were removed during demolition of the second floor of the Gordon County Government Plaza.

Members of the Gordon County Commission heard updates regarding and saw photos of the work taking place on the new county health department, as well as the second floor of the government plaza, during their meeting Tuesday evening.

County Administrator Jim Ledbetter said the walls at the health department have gone up and the trusses are scheduled to arrive by Jan. 14.

The structure is taking shape directly behind the existing health department on North River Street.

Officials broke ground on the $2.3 million Special Purpose, Local Option Sales Tax project back in November of last year. Ledbetter said at that time that the money has already been collected so every cent will go toward the project because the county won’t be paying any bond or finance fees. Due to the age and concerns such as mold and rot, the current health department building will be torn down after the new one is opened.

The project is scheduled to be completed in July.

Ledbetter also updated commissioners about the work to renovate the second floor of the Gordon County Government Plaza, which is the first step toward renovation of county courthouse and annex, another SPLOST project.

The walls there have been taken down and demolition is complete, he said, adding that his office is scheduled to receive updates about both projects on Friday.

Walter Harris, chair of the Planning Commission for the event, said the theme this year will be “Together We Are Greater,” something he hopes the community will take to heart as they come together to celebrate the life and legacy of Martin Luther King Jr. and going forward.

“It is a new year, a new decade and a new beginning. Let’s start it with love and continue to grow with each other. If we have any faults or problems with anyone, let’s put those differences aside and show love to one another. That’s what this decade should be about,” Harris said. “The world would be a better place if we showed more love and gratitude.”

The keynote speaker for the event will be pastor and author Christopher Bowen, the founder of Living Faith International Ministries and of Living Faith Tabernacle in Forest Park. Other speakers are set to include Judge Richard Parker, soloist Virgil Harrison and city and county officials from the local area. All local pastors who attend the celebration will be recognized.

Harris said Bowen previously acted as a speaker at the event and was brought back due to popular demand.

A tribute to Lula Bowden, whose hard work resulted in the creation of Martin Luther King Drive in Calhoun, will be conducted during the event. Harris said her children and grandchildren will be present to show support. Upwards of 300 community members are expected to attend.

The memorial is free and open to the public, but donations are being accepted in the form of monetary contributions and covered food items, which can be brought to the McConnell Road Community Center on the day of the celebration. All funds raised will go toward “planned activities, purchasing advertising materials and helping needy families in the community,” Harris said.

The money will also go toward providing a local student graduating from Calhoun High School an iPad to take with them to college. The student will be chosen by officials at the school, but one of the selection criteria is that they maintain a high grade point average.

Monetary donations can be made out to the MLK Planning Commission and mailed to 120 Yarbrough St. in Calhoun. Those will also be accepted at the door. Any businesses or churches looking to participate in the event or who would like to offer door prizes for attendees can contact Harris at 706-236-4584.

The event will be held at 452 W. Line Street in Calhoun. The following day, Monday, Jan. 20, community members are encouraged to place flowers on the MLK Memorial on Court Street any time during the day in honor of family members, lost loved ones and community togetherness. 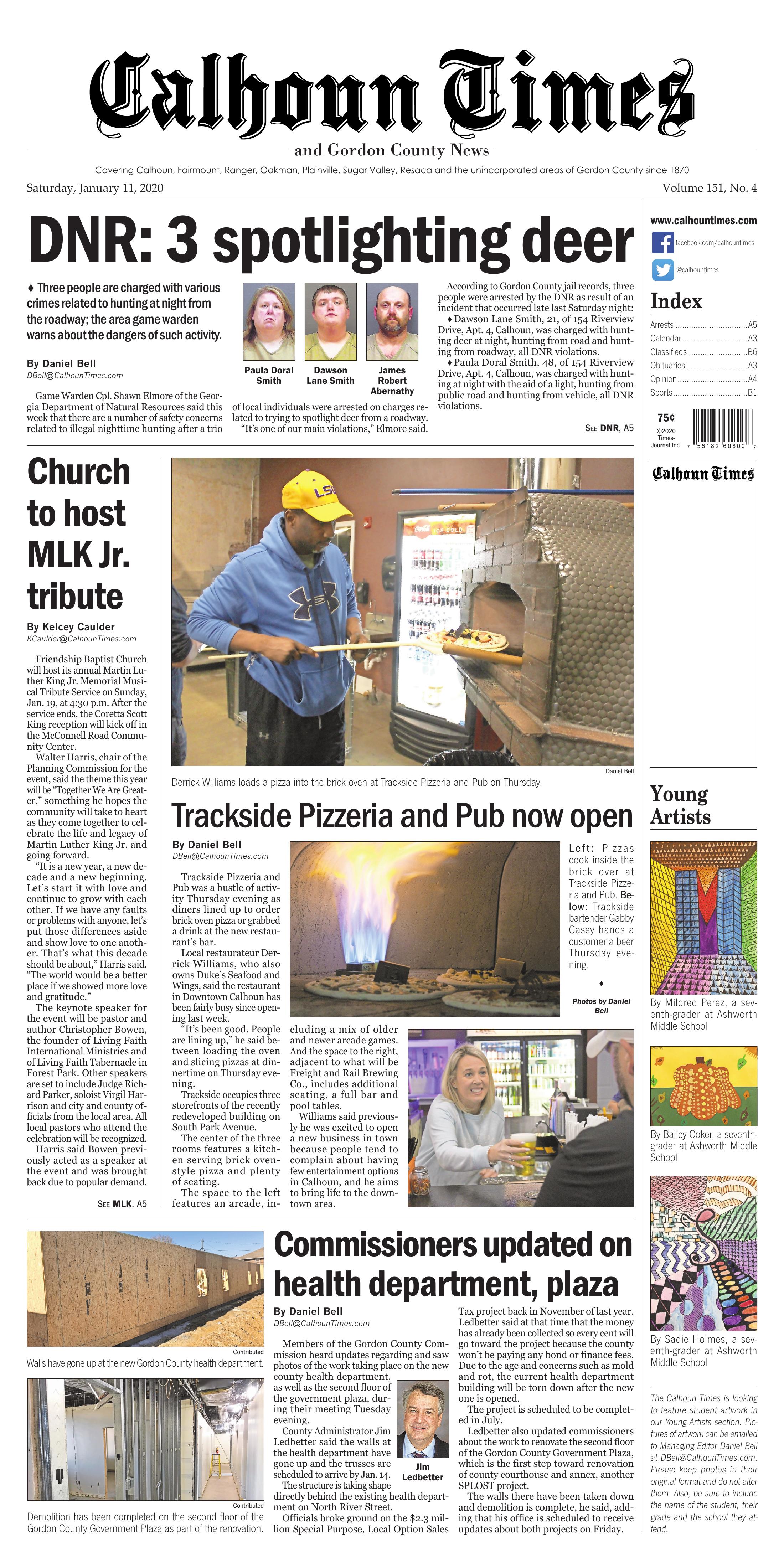