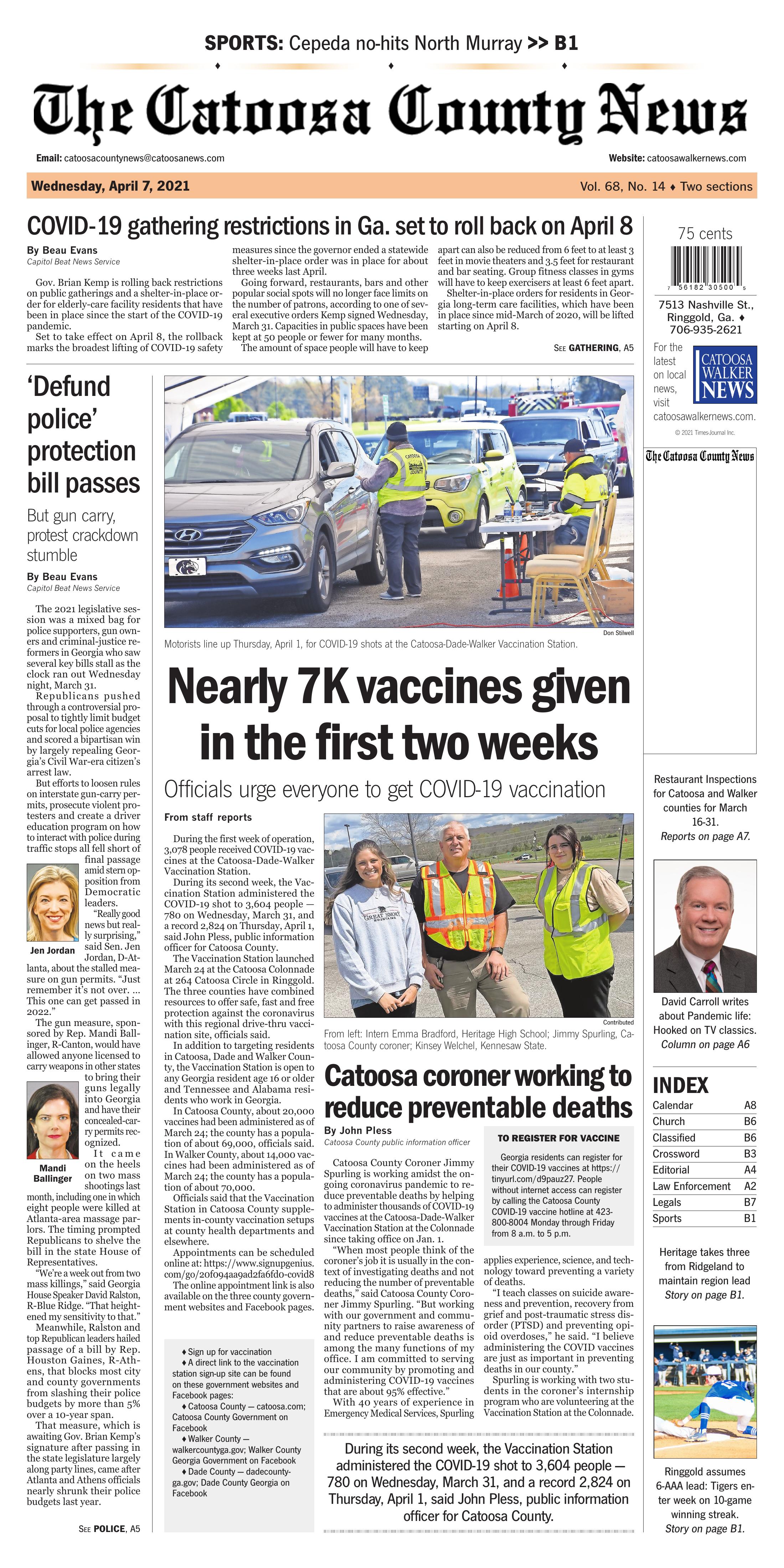 Georgia Gov. Brian Kemp whispers to Kathleen Toomey, commissioner for the Georgia Department of Public Health, during a news conference at the Georgia Capitol, on March 16 in Atlanta.

Gov. Brian Kemp is rolling back restrictions on public gatherings and a shelter-in-place order for elderly-care facility residents that have been in place since the start of the COVID-19 pandemic.

Set to take effect on April 8, the rollback marks the broadest lifting of COVID-19 safety measures since the governor ended a statewide shelter-in-place order was in place for about three weeks last April.

Going forward, restaurants, bars and other popular social spots will no longer face limits on the number of patrons, according to one of several executive orders Kemp signed Wednesday, March 31. Capacities in public spaces have been kept at 50 people or fewer for many months.

The amount of space people will have to keep apart can also be reduced from 6 feet to at least 3 feet in movie theaters and 3.5 feet for restaurant and bar seating. Group fitness classes in gyms will have to keep exercisers at least 6 feet apart.

Shelter-in-place orders for residents in Georgia long-term care facilities, which have been in place since mid-March of 2020, will be lifted starting on April 8.

Additionally, the order allows state government employees and public-school teachers to take up to 8 hours off of work without using vacation or sick time in order to receive COVID-19 vaccines.

Georgia’s public health emergency, which allows Kemp to continue issuing executive orders on COVID-19, will be extended through the end of April.

The upcoming restrictions rollback comes as Georgia makes headway in vaccinating the state’s nearly 11 million residents after opening up eligibility to everyone in the state 16 years of age and older on March 25.

Nearly 3.8 million vaccines have been administered in Georgia as of Wednesday afternoon, March 31, roughly 80% of the number of doses shipped by the federal government, according to state Department of Public Health data.

Georgians can pre-register for a vaccine appointment at myvaccinegeorgia.com even if they do not yet qualify under the governor’s eligibility criteria. They will be notified once they qualify and scheduled for an appointment.

Kemp has long prioritized balancing COVID-19 restrictions with keeping businesses open in Georgia, touting the state’s improved economy amid the pandemic compared to many places elsewhere in the U.S. Critics have slammed him for not taking more drastic steps to curb the virus’ spread.

The governor has also faced backlash for not imposing a statewide mask mandate, as well as moving to block local governments like Atlanta and Savannah from adopting mask requirements earlier in the pandemic. President Joe Biden’s administration has urged state officials to impose mask mandates.

More than 852,000 people had tested positive for COVID-19 in Georgia as of Wednesday afternoon, March 31, with about 207,000 more reported positive antigen tests indicating likely positive results. The virus has killed 16,607 Georgians.

Catoosa_walker_news
Nearly 7,000 vaccines given in first two weeks at Vaccination Station
Officials urge everyone to get COVID-19 vaccination
Don Stilwell

Motorists line up Thursday, April 1, for COVID-19 shots at the Catoosa-Dade-Walker Vaccination Station.

During the first week of operation, 3,078 people received COVID-19 vaccines at the Catoosa-Dade-Walker Vaccination Station.

During its second week, the Vaccination Station administered the COVID-19 shot to 3,604 people — 780 on Wednesday, March 31, and a record 2,824 on Thursday, April 1, said John Pless, public information officer for Catoosa County.

The Vaccination Station launched March 24 at the Catoosa Colonnade at 264 Catoosa Circle in Ringgold. The three counties have combined resources to offer safe, fast and free protection against the coronavirus with this regional drive-thru vaccination site, officials said.

In addition to targeting residents in Catoosa, Dade and Walker County, the Vaccination Station is open to any Georgia resident age 16 or older and Tennessee and Alabama residents who work in Georgia.

Appointments can be scheduled online at: https://www.signupgenius.com/go/20f094aa9ad2fa6fd0-covid8

The online appointment link is also available on the three county government websites and Facebook pages.

A direct link to the vaccination station sign-up site can be found on these government websites and Facebook pages:

Catoosa County Coroner Jimmy Spurling is working amidst the ongoing coronavirus pandemic to reduce preventable deaths by helping to administer thousands of COVID-19 vaccines at the Catoosa-Dade-Walker Vaccination Station at the Colonnade since taking office on Jan. 1.

“When most people think of the coroner’s job it is usually in the context of investigating deaths and not reducing the number of preventable deaths,” said Catoosa County Coroner Jimmy Spurling. “But working with our government and community partners to raise awareness of and reduce preventable deaths is among the many functions of my office. I am committed to serving our community by promoting and administering COVID-19 vaccines that are about 95% effective.”

With 40 years of experience in Emergency Medical Services, Spurling applies experience, science, and technology toward preventing a variety of deaths.

“I teach classes on suicide awareness and prevention, recovery from grief and post-traumatic stress disorder (PTSD) and preventing opioid overdoses,” he said. “I believe administering the COVID vaccines are just as important in preventing deaths in our county.”

Spurling is working with two students in the coroner’s internship program who are volunteering at the Vaccination Station at the Colonnade.

To register for vaccine

The 2021 legislative session was a mixed bag for police supporters, gun owners and criminal-justice reformers in Georgia who saw several key bills stall as the clock ran out Wednesday night, March 31.

But efforts to loosen rules on interstate gun-carry permits, prosecute violent protesters and create a driver education program on how to interact with police during traffic stops all fell short of final passage amid stern opposition from Democratic leaders.

“Really good news but really surprising,” said Sen. Jen Jordan, D-Atlanta, about the stalled measure on gun permits. “Just remember it’s not over. … This one can get passed in 2022.”

The gun measure, sponsored by Rep. Mandi Ballinger, R-Canton, would have allowed anyone licensed to carry weapons in other states to bring their guns legally into Georgia and have their concealed-carry permits recognized.

It came on the heels on two mass shootings last month, including one in which eight people were killed at Atlanta-area massage parlors. The timing prompted Republicans to shelve the bill in the state House of Representatives.

“We’re a week out from two mass killings,” said Georgia House Speaker David Ralston, R-Blue Ridge. “That heightened my sensitivity to that.”

Meanwhile, Ralston and top Republican leaders hailed passage of a bill by Rep. Houston Gaines, R-Athens, that blocks most city and county governments from slashing their police budgets by more than 5% over a 10-year span.

That measure, which is awaiting Gov. Brian Kemp’s signature after passing in the state legislature largely along party lines, came after Atlanta and Athens officials nearly shrunk their police budgets last year.

“While cities like Minneapolis, Los Angeles, and Portland might feel comfortable slashing police budgets and compromising public safety, we won’t let that happen in Georgia,” Gaines said in a statement after the bill passed.

“Instead, we proudly stand with our men and women in blue – and call on every other state legislature to take action and ensure that the radical ‘defund the police’ movement doesn’t endanger more American lives.”

Passage of Gaines’ bill followed last summer’s nationwide protests against police brutality and racial injustice, which sparked calls for redirecting police funds toward other social services as well as moves by conservative leaders to shore up support for law enforcement.

But a pair of proposals favoring police officers that were filed partly in response to those protests failed to gain enough traction Wednesday, March 31, to clear the General Assembly and reach the governor’s desk.

One measure, brought by Sen. Randy Robertson, R-Cataula, would have made it a felony for groups of seven people or more to cause property damage or violence and hold city and county governments liable in civil court for interfering in a police agency’s protest enforcement.

Another measure – also by Robertson, a retired Muscogee County police officer – would have required driver-training courses in Georgia to include instruction on how drivers should act when police officers pull them over during traffic stops.

Backers called it a common-sense proposal to improve interactions between police and citizens after years of high-profile deaths involving people being detained that have eroded public trust, such as the killing of George Floyd by a Minneapolis officer last May.

“This just recognizes the fact that we as a community have a responsibility to each other for our mutual safety when it comes to traffic stops and law enforcement interaction,” said Rep. Martin Momtahan, R-Dallas, who carried Robertson’s bill in the House.

Democrats and criminal-justice advocates argued it would put the burden on drivers to behave in certain ways with police while ignoring scenarios in which officers may abuse their authority during traffic stops.

“This is horribly one-sided, out of touch with reality and incredibly dangerous,” said Rep. Kimberly Alexander, D-Hiram. “When civilians do not know their own rights, it is more likely that their rights will be violated.”

Beyond all of those bills, the General Assembly also passed out crime and policing measures to toughen punishments for mail and package theft, relax hurdles for low-level offenders to end their probation early and require cash bail for additional crimes including burglary, staling and car break-ins.

Among the failed bills on criminal justice this session was a measure to create an oversight board able to punish and remove bad-actor district attorneys and solicitors general. The proposal hit a wall in the Senate amid criticism it could strip Georgia prosecutors of important tools to pick and choose cases.

Bills that failed this year could catch a second wind in 2022 for the next half of the two-year legislative term.