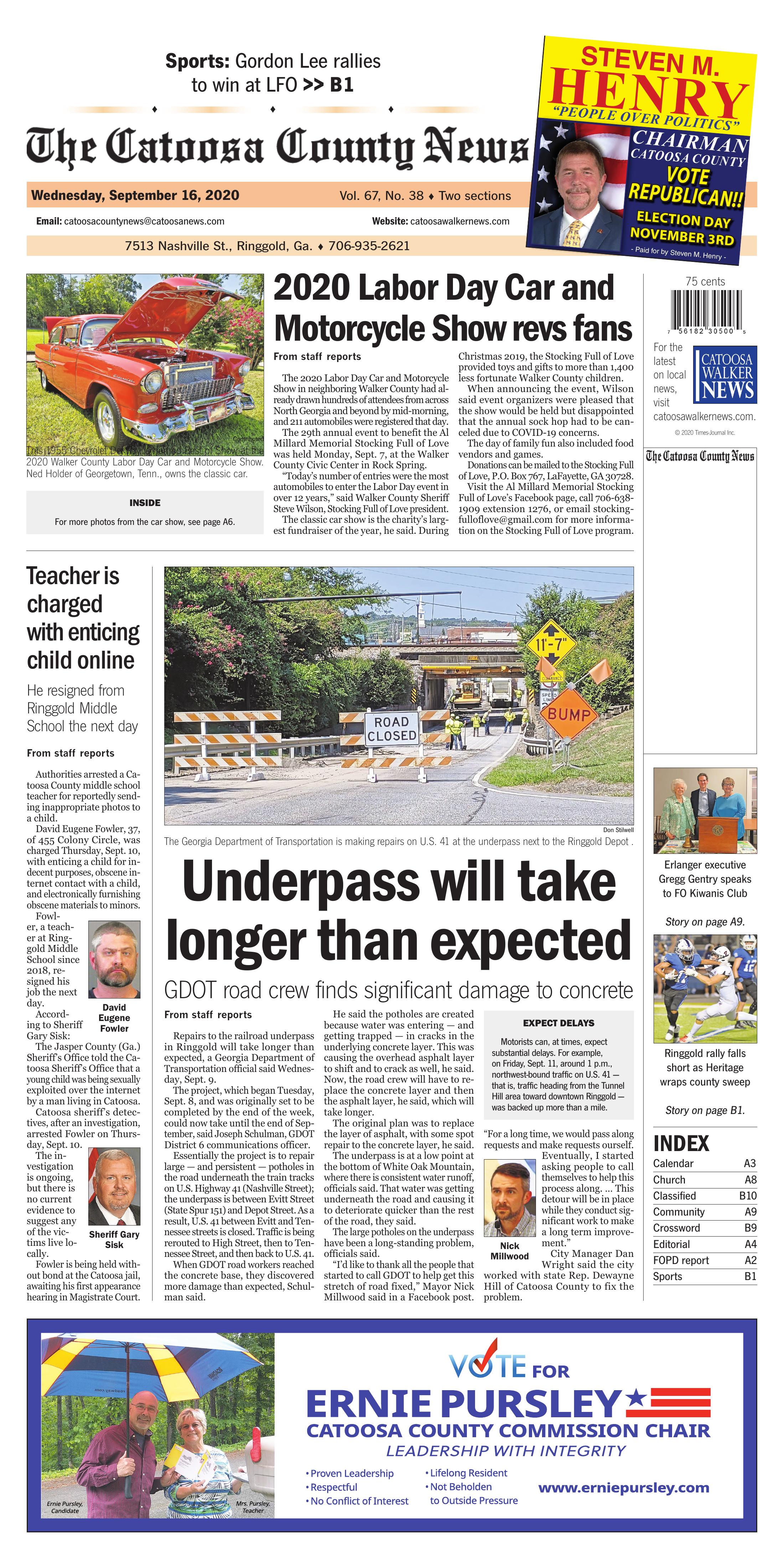 The 2020 Labor Day Car and Motorcycle Show in neighboring Walker County had already drawn hundreds of attendees from across North Georgia and beyond by mid-morning, and 211 automobiles were registered that day.

“Today’s number of entries were the most automobiles to enter the Labor Day event in over 12 years,” said Walker County Sheriff Steve Wilson, Stocking Full of Love president.

The classic car show is the charity’s largest fundraiser of the year, he said. During Christmas 2019, the Stocking Full of Love provided toys and gifts to more than 1,400 less fortunate Walker County children.

When announcing the event, Wilson said event organizers were pleased that the show would be held but disappointed that the annual sock hop had to be canceled due to COVID-19 concerns.

For more photos from the show, see page A6.

The Georgia Department of Transportation is making repairs on U.S. 41 at the underpass next to the Ringgold Depot . Detour routes are in place.

The Georgia Department of Transportation is making repairs on U.S. 41 at the underpass next to the Ringgold Depot. Detour routes are in place.

Repairs to the railroad underpass in Ringgold will take longer than expected, a Georgia Department of Transportation official said Wednesday, Sept. 9.

The project, which began Tuesday, Sept. 8, and was originally set to be completed by the end of the week, could now take until the end of September, said Joseph Schulman, GDOT District 6 communications officer.

Essentially the project is to repair large — and persistent — potholes in the road underneath the train tracks on U.S. Highway 41 (Nashville Street); the underpass is between Evitt Street (State Spur 151) and Depot Street. As a result, U.S. 41 between Evitt and Tennessee streets is closed. Traffic is being rerouted to High Street, then to Tennessee Street, and then back to U.S. 41.

When GDOT road workers reached the concrete base, they discovered more damage than expected, Schulman said.

He said the potholes are created because water was entering — and getting trapped — in cracks in the underlying concrete layer. This was causing the overhead asphalt layer to shift and to crack as well, he said. Now, the road crew will have to replace the concrete layer and then the asphalt layer, he said, which will take longer.

The original plan was to replace the layer of asphalt, with some spot repair to the concrete layer, he said.

The underpass is at a low point at the bottom of White Oak Mountain, where there is consistent water runoff, officials said. That water was getting underneath the road and causing it to deteriorate quicker than the rest of the road, they said.

The large potholes on the underpass have been a long-standing problem, officials said.

“I’d like to thank all the people that started to call GDOT to help get this stretch of road fixed,” Mayor Nick Millwood said in a Facebook post. “For a long time, we would pass along requests and make requests ourself. Eventually, I started asking people to call themselves to help this process along. … This detour will be in place while they conduct significant work to make a long term improvement.”

Motorists can, at times, expect substantial delays. For example, on Friday, Sept. 11, around 1 p.m., northwest-bound traffic on U.S. 41 — that is, traffic heading from the Tunnel Hill area toward downtown Ringgold — was backed up more than a mile.

David Eugene Fowler, 37, of 455 Colony Circle, was charged Thursday, Sept. 10, with enticing a child for indecent purposes, obscene internet contact with a child, and electronically furnishing obscene materials to minors.

Fowler, a teacher at Ringgold Middle School since 2018, resigned his job the next day.

According to Sheriff Gary Sisk:

The investigation is ongoing, but there is no current evidence to suggest any of the victims live locally.

Fowler is being held without bond at the Catoosa jail, awaiting his first appearance hearing in Magistrate Court.