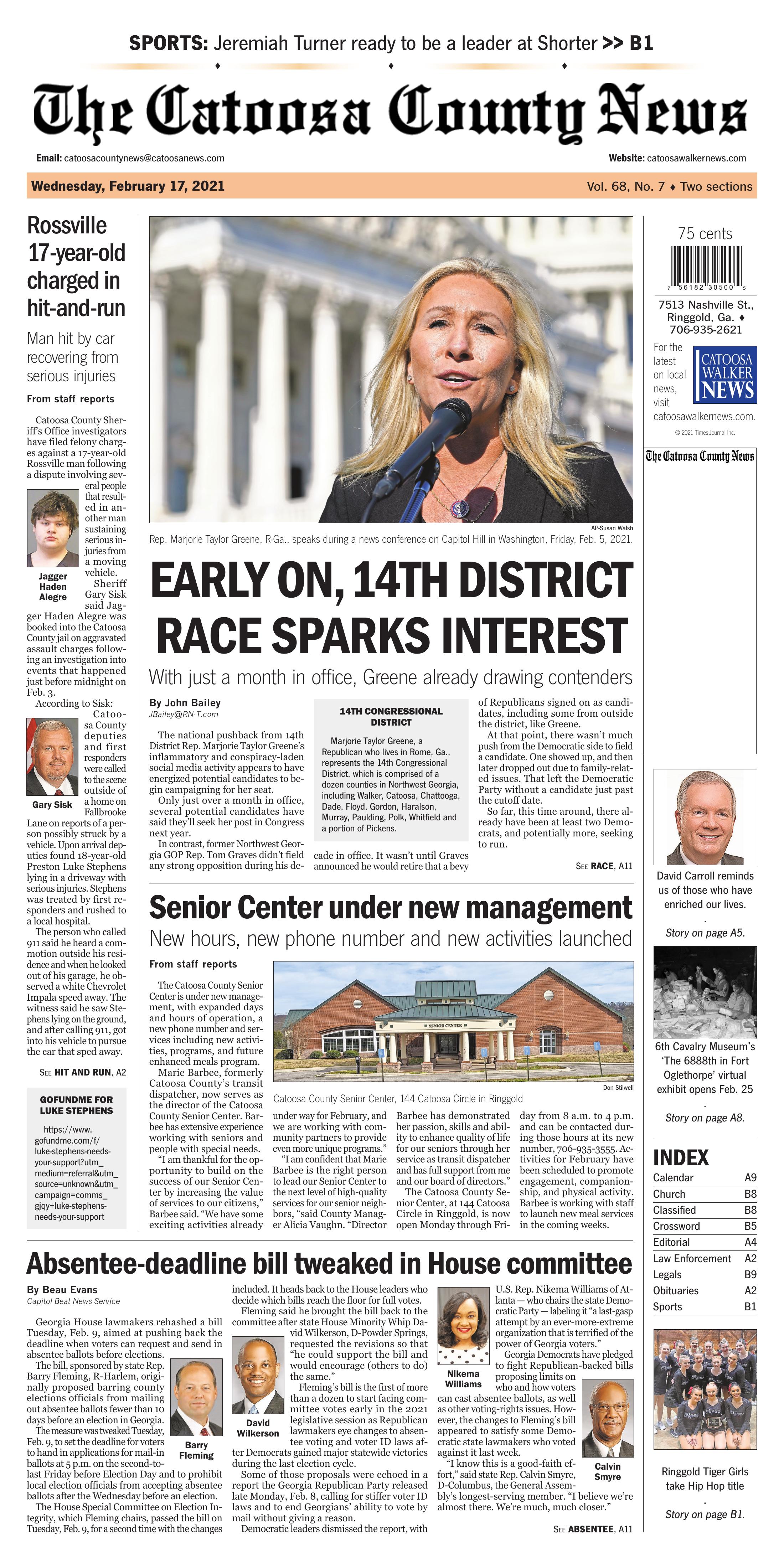 Only just over a month in office, several potential candidates have said they’ll seek her post in Congress next year.

In contrast, former Northwest Georgia GOP Rep. Tom Graves didn’t field any strong opposition during his decade in office. It wasn’t until Graves announced he would retire that a bevy of Republicans signed on as candidates, including some from outside the district, like Greene.

At that point, there wasn’t much push from the Democratic side to field a candidate. One showed up, and then later dropped out due to family-related issues. That left the Democratic Party without a candidate just past the cutoff date.

So far, this time around, there already have been at least two Democrats, and potentially more, seeking to run.

There also have been rumblings from the Republican side. Her former runoff opponent, Rome neurosurgeon Dr. John Cowan, has been active politically and in the media.

He’s given a number of interviews to national and international media organizations regarding the district recently, but would only say he was “undecided” when asked on Monday, Feb. 8, if he would run again.

Greene was removed from her posts on the Education and Labor Committee and the Budget Committee on Feb. 4 for spreading inflammatory and conspiracy-laden social media posts. She remained defiant during a Friday, Feb. 5, press conference and has continued to be vocal on her social media accounts.

“The Media Mob, the Silicon Valley Cartel, the Dangerous Democrats, & the RINO Never Trumpers are ALL pushing the Republican Party to move on and away from President Trump,” she said in a tweet posted Monday, Feb. 8. “Mark my words. We will NEVER leave him. All elected Republicans that are against him seal their own fate.”

A big factor concerning the seat is up in the air — what the 14th District will look like after redistricting takes place later this year.

The U.S. Census Bureau is set to release state figures soon and they’re estimating the population in Georgia has grown by around a million people since the 2010 Census. Once released, the Republican-dominated state legislature will then draw up the district maps for the next decade.

Georgia currently has 14 of the House’s 435 seats and may not get more, despite population growth. That means district borders will be shifted to divvy up the population equally among the existing districts.

Up and down ballot challenges galore

The buildup to what’s expected to be a political free-for-all in 2022 isn’t limited to the 14th District. Top Republicans in the state are likely to face challenges from within their party as well as from the outside — and let’s not forget there will be a U.S. Senate seat in contention again.

Former president Donald Trump has continued to target fellow Republican Gov. Brian Kemp. He encouraged former U.S. Rep. Doug Collins to take on Kemp and repeatedly bashed the governor on Twitter, prior to being banned from the social media platform.

That’s not to speak for others in Georgia’s GOP who are likely to face challenges from inside their own party — like Secretary of State Brad Raffensperger.

Raffensperger and his staff adamantly defended the results of the presidential election in Georgia, which Trump lost by a slim margin, as well as the integrity of the state’s voting system.

Trump repeatedly aired false claims that there was widespread voter fraud and was recorded in a phone call, which Raffensperger released to the Washington Post, telling the elections chief to find votes to overturn the election.

Regardless, the main event appears to be a rematch between Kemp and Democrat Stacey Abrams, who Kemp very narrowly defeated in 2018.

Abrams, who organized voter turnout campaigns that benefited the Democratic Party in the November election and January Senate runoff, has not yet announced an intention to run for governor.

However, if she does, she’ll be running alongside newly elected Sen. Raphael Warnock.

Warnock, a Democrat from Atlanta, beat out Kemp’s GOP appointee Kelly Loeffler for the post.

But he’s serving the balance of retired Sen. Johnny Isakson’s term, which expires in January 2023.

While U.S. senators have six-year terms, every two years the members of one class, about one-third of the Senate, face election or reelection.

Warnock’s most likely opponent at this point is Collins, who has said he is considering another run for the seat. Collins ran for the seat in the free-for-all primary, vying against both Loeffler and Warnock and then conceding defeat.

Marjorie Taylor Greene, a Republican who lives in Rome, Ga., represents the 14th Congressional District, which is comprised of a dozen counties in Northwest Georgia, including Walker, Catoosa, Chattooga, Dade, Floyd, Gordon, Haralson, Murray, Paulding, Polk, Whitfield and a portion of Pickens.

The Catoosa County Senior Center is under new management, with expanded days and hours of operation, a new phone number and services including new activities, programs, and future enhanced meals program.

“I am thankful for the opportunity to build on the success of our Senior Center by increasing the value of services to our citizens,” Barbee said. “We have some exciting activities already under way for February, and we are working with community partners to provide even more unique programs.”

“I am confident that Marie Barbee is the right person to lead our Senior Center to the next level of high-quality services for our senior neighbors, “said County Manager Alicia Vaughn. “Director Barbee has demonstrated her passion, skills and ability to enhance quality of life for our seniors through her service as transit dispatcher and has full support from me and our board of directors.”

The Catoosa County Senior Center, at 144 Catoosa Circle in Ringgold, is now open Monday through Friday from 8 a.m. to 4 p.m. and can be contacted during those hours at its new number, 706-935-3555. Activities for February have been scheduled to promote engagement, companionship, and physical activity. Barbee is working with staff to launch new meal services in the coming weeks.

Georgia House lawmakers rehashed a bill Tuesday, Feb. 9, aimed at pushing back the deadline when voters can request and send in absentee ballots before elections.

The measure was tweaked Tuesday, Feb. 9, to set the deadline for voters to hand in applications for mail-in ballots at 5 p.m. on the second-to-last Friday before Election Day and to prohibit local election officials from accepting absentee ballots after the Wednesday before an election.

The House Special Committee on Election Integrity, which Fleming chairs, passed the bill on Tuesday, Feb. 9, for a second time with the changes included. It heads back to the House leaders who decide which bills reach the floor for full votes.

Fleming said he brought the bill back to the committee after state House Minority Whip David Wilkerson, D-Powder Springs, requested the revisions so that “he could support the bill and would encourage (others to do) the same.”

Fleming’s bill is the first of more than a dozen to start facing committee votes early in the 2021 legislative session as Republican lawmakers eye changes to absentee voting and voter ID laws after Democrats gained major statewide victories during the last election cycle.

Some of those proposals were echoed in a report the Georgia Republican Party released late Monday, Feb. 8, calling for stiffer voter ID laws and to end Georgians’ ability to vote by mail without giving a reason.

Democratic leaders dismissed the report, with U.S. Rep. Nikema Williams of Atlanta — who chairs the state Democratic Party — labeling it “a last-gasp attempt by an ever-more-extreme organization that is terrified of the power of Georgia voters.”

Georgia Democrats have pledged to fight Republican-backed bills proposing limits on who and how voters can cast absentee ballots, as well as other voting-rights issues. However, the changes to Fleming’s bill appeared to satisfy some Democratic state lawmakers who voted against it last week.

“I know this is a good-faith effort,” said state Rep. Calvin Smyre, D-Columbus, the General Assembly’s longest-serving member. “I believe we’re almost there. We’re much, much closer.”

The bill’s supporters argue it would ease pressure on county elections officials who are juggling early in-person voting and Election Day preparations on top of processing absentee-ballot applications. Voters would also know their ballots arrived in the mail on time before the polls close, according to supporters.

“I think this does a lot toward protecting the integrity of those who have voted by mail before so that those ballots can be handled with a good chain of custody,” said state Rep. Chuck Martin, R-Alpharetta.

Opponents have warned the bill could spur longer lines at polling places and harm voters who requested absentee ballots weeks in advance but still had not received them in the mail by the new deadline.

Election-focused bills are taking center stage in the legislative session now underway after the 2020 election cycle saw Democrats carry Georgia in the presidential election and win both of the state’s U.S. Senate seats.

Republicans have said they’re necessary to restore confidence after claims of voter fraud in the 2020 contests spurred distrust among many conservative voters in the state’s election integrity.

Sheriff Gary Sisk said Jagger Haden Alegre was booked into the Catoosa County jail on aggravated assault charges following an investigation into events that happened just before midnight on Feb. 3.

Catoosa County deputies and first responders were called to the scene outside of a home on Fallbrooke Lane on reports of a person possibly struck by a vehicle. Upon arrival deputies found 18-year-old Preston Luke Stephens lying in a driveway with serious injuries. Stephens was treated by first responders and rushed to a local hospital.

The person who called 911 said he heard a commotion outside his residence and when he looked out of his garage, he observed a white Chevrolet Impala speed away. The witness said he saw Stephens lying on the ground, and after calling 911, got into his vehicle to pursue the car that sped away.

Based on multiple witness accounts and evidence found at the scene, investigators believe the incident is the result of a dispute between Stephens and several others who were inside the Chevrolet.

Witnesses say as the dispute escalated Stephens allegedly reached into the vehicle through a window and the driver, Alegre, allegedly drove away, striking a mailbox and curb when Stephens suffered injuries. The Chevrolet Impala with Alegre and three passengers was later found by Ringgold police officers on Alabama Highway.

After a traffic stop, all four inside the Chevrolet Impala were brought to the Catoosa County Sheriff’s Office for questioning.

The investigation into what caused the dispute continues. 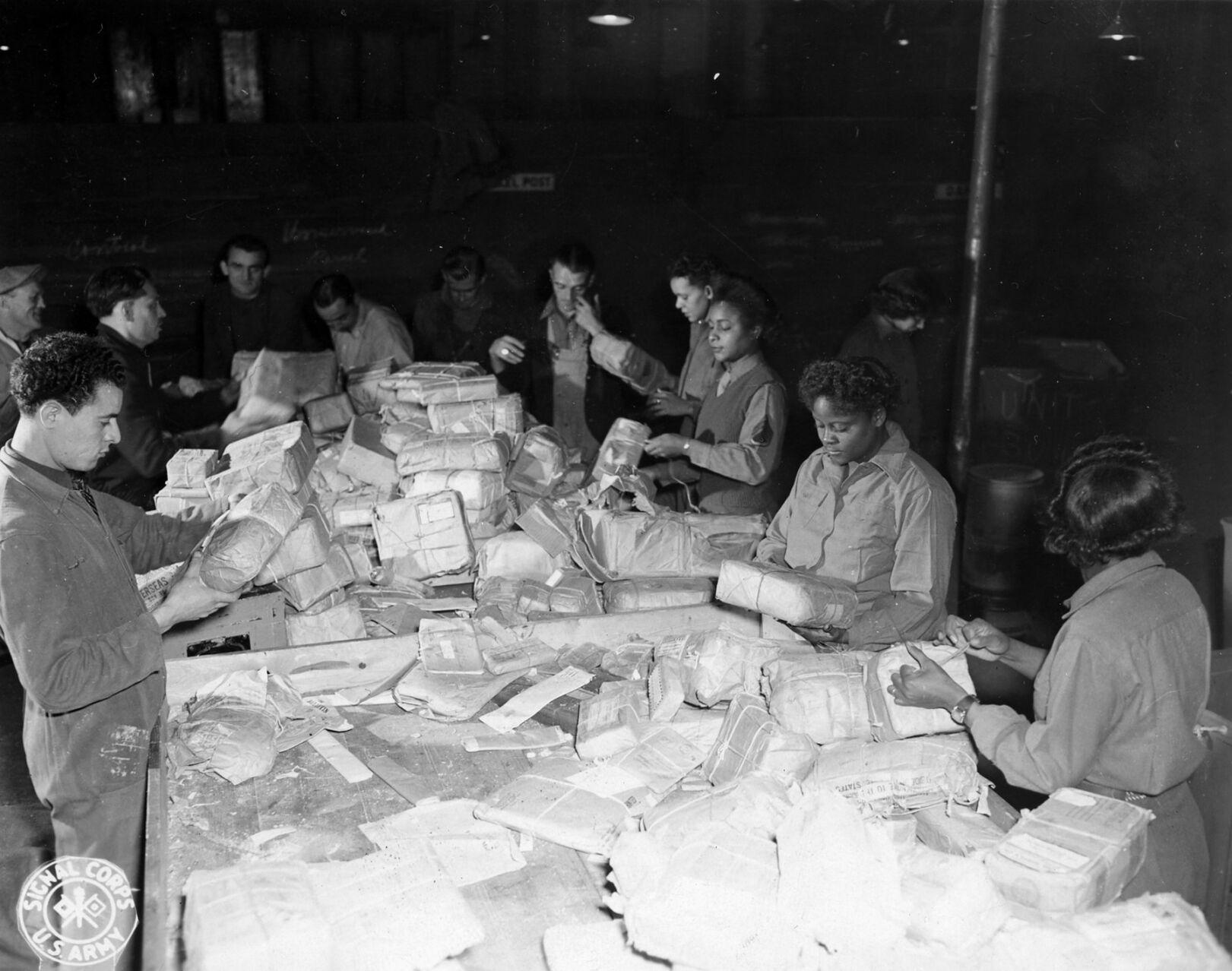 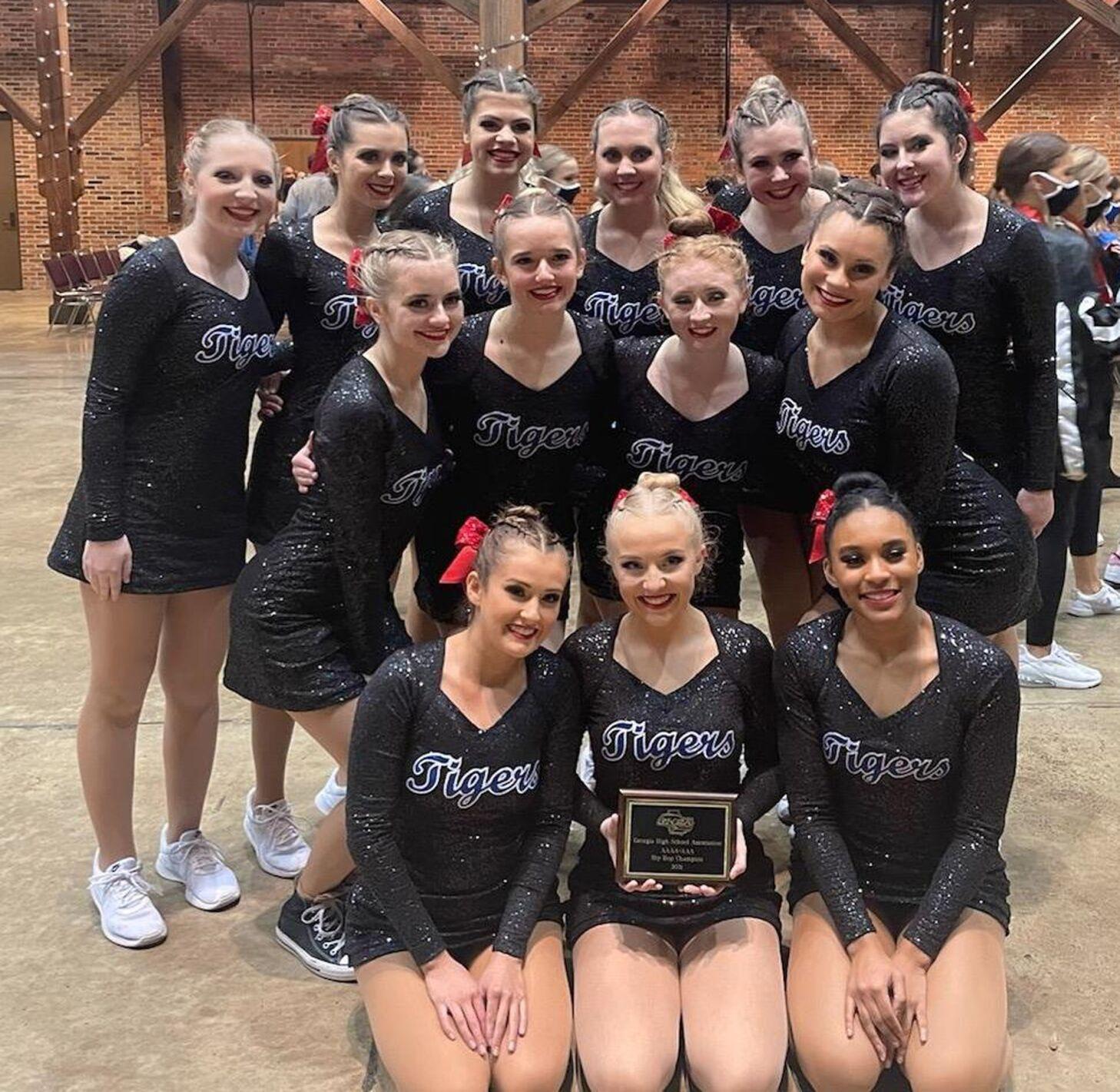