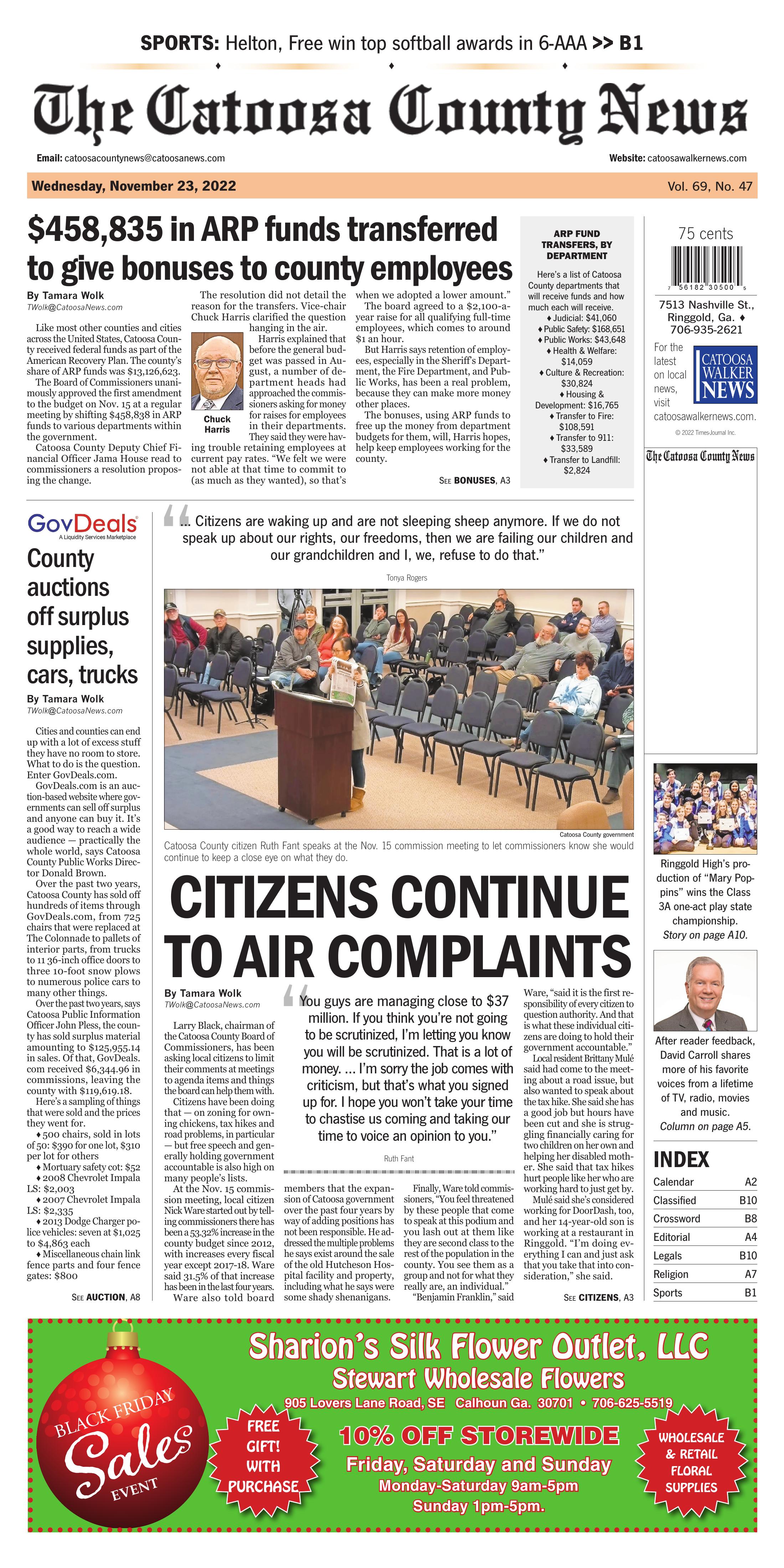 Catoosa County Deputy Chief Financial Officer Jama House explained at a Board of Commissioners meeting how American Recovery Act funds would be used to help with employee bonuses.

Like most other counties and cities across the United States, Catoosa County received federal funds as part of the American Recovery Plan. The county’s share of ARP funds was $13,126,623.

The Board of Commissioners unanimously approved the first amendment to the budget on Nov. 15 at a regular meeting by shifting $458,838 in ARP funds to various departments within the government.

The resolution did not detail the reason for the transfers. Vice-chair Chuck Harris clarified the question hanging in the air.

Harris explained that before the general budget was passed in August, a number of department heads had approached the commissioners asking for money for raises for employees in their departments. They said they were having trouble retaining employees at current pay rates. “We felt we were not able at that time to commit to (as much as they wanted), so that’s when we adopted a lower amount.”

The board agreed to a $2,100-a-year raise for all qualifying full-time employees, which comes to around $1 an hour.

But Harris says retention of employees, especially in the Sheriff’s Department, the Fire Department, and Public Works, has been a real problem, because they can make more money other places.

The bonuses, using ARP funds to free up the money from department budgets for them, will, Harris hopes, help keep employees working for the county.

House explained, when asked, that ARP funds came with a lot of rules attached, and transfer assured the funds were being used properly. House said some money also came from the general budget contingency fund of $83,000.

The bonuses will be for $1,000 to $1,200 each for qualifying full-time employees. They will be distributed in two installments — $500-$600 in December and the rest early next summer.

A citizen attending the meeting asked why the county didn’t use $2.3 million spent two years ago on a piece of property that has not yet been utilized on pay increases if retaining employees was so difficult. No one addressed the question, which was posed during public comments.

Here's a list of Catoosa County departments that will receive funds and how much each will receive.

Catoosa County citizen Ruth Fant speaks at the Nov. 15 commission meeting to let commissioners know she would continue to keep a close eye on what they do.

Larry Black, chairman of the Catoosa County Board of Commissioners, has been asking local citizens to limit their comments at meetings to agenda items and things the board can help them with.

Citizens have been doing that — on zoning for owning chickens, tax hikes and road problems, in particular — but free speech and generally holding government accountable is also high on many people’s lists.

At the Nov. 15 commission meeting, local citizen Nick Ware started out by telling commissioners there has been a 53.32% increase in the county budget since 2012, with increases every fiscal year except 2017-18. Ware said 31.5% of that increase has been in the last four years.

Ware also told board members that the expansion of Catoosa government over the past four years by way of adding positions has not been responsible. He addressed the multiple problems he says exist around the sale of the old Hutcheson Hospital facility and property, including what he says were some shady shenanigans.

Finally, Ware told commissioners, “You feel threatened by these people that come to speak at this podium and you lash out at them like they are second class to the rest of the population in the county. You see them as a group and not for what they really are, an individual.”

“Benjamin Franklin,” said Ware, “said it is the first responsibility of every citizen to question authority. And that is what these individual citizens are doing to hold their government accountable.”

Local resident Brittany Mulé said had come to the meeting about a road issue, but also wanted to speak about the tax hike. She said she has a good job but hours have been cut and she is struggling financially caring for two children on her own and helping her disabled mother. She said that tax hikes hurt people like her who are working hard to just get by.

Mulé said she’s considered working for DoorDash, too, and her 14-year-old son is working at a restaurant in Ringgold. “I’m doing everything I can and just ask that you take that into consideration,” she said.

Chairman Black asked Mulé to give her name to the clerk. “There may be some services you’re not aware of,” he said.

Next up was Tonya Rogers, who attends and speaks at many commission meetings. “You said to tell us something good every once in a while,” she started out. “Well, I’ve thought about it.” Rogers went on to praise commissioners for having the courage to open meetings with prayer and a pledge to the American flag. She said she wished other levels of government would do the same.

Rogers took issue with commissioners she said had implied that she had lied at meetings. “We do not have to come here,” she said. “We’re taking time away from our families. We are all here to discuss issues we are passionate about. Citizens have no reason to come here with lies. I’m sorry that citizens are waking up and are not sleeping sheep anymore. If we do not speak up about our rights, our freedoms, then we are failing our children and our grandchildren and I, we, refuse to do that.”

Rogers went on to clarify comments from the previous commission meeting that she thought were misunderstood as accusations against specific people that she did not intend as such.

Citizen Adrienne Kittle, also a frequent attendee, spoke specifically about the “chicken war” that’s been going on for seven months. She said she filed an open records request for complaints from the public about chickens since 2021. She received 14 records.

Of those 14 records, Kittle said, two contained both a first and last name of the complainants, eight were completely anonymous, one contained a first name only and three listed no complaints. Two, said Kittle, listed only general areas where they saw chickens and not specific addresses.

Kittle said there was no evidence in any case that warranted nuisance abatement.

“So I am puzzled about why the zoning department and code enforcement say they hear complaints all the time about chickens. Where is the evidence?” Kittle asked.

Jimmy Gray was up next and likened the board to the boy who cried “wolf,” except, said Gray, the board was crying “more” — more money for personnel, rent for offices, projects that didn’t make sense and excess driving around putting wear and tear on county vehicles. He also took issue with county decisions about de-annexation. Gray expressed gratitude toward Commissioner Charlie Stephens for his stand on a number of issues but told the board as a whole that what is needed is “more honesty and transparency about what and how money is spent.”

Ruth Fant rounded out the public comments segment of the meeting. She said she would rather be at her daughter’s volleyball game, but she couldn’t reach her commissioner and felt her voice needed to be heard.

“You guys are managing close to $37 million,” Fant said. “If you think you’re not going to be scrutinized, I’m letting you know you will be scrutinized. That is a lot of money.

“I’m sorry the job comes with criticism,” Fant told the board, “but that’s what you signed up for. I hope you won’t take your time to chastise us coming and taking our time to voice an opinion to you.”

" ... Citizens are waking up and are not sleeping sheep anymore. If we do not speak up about our rights, our freedoms, then we are failing our children and our grandchildren and I, we, refuse to do that."

“You guys are managing close to $37 million. If you think you’re not going to be scrutinized, I’m letting you know you will be scrutinized. That is a lot of money. … I’m sorry the job comes with criticism, but that’s what you signed up for. I hope you won’t take your time to chastise us coming and taking our time to voice an opinion to you."

Cities and counties can end up with a lot of excess stuff they have no room to store. What to do is the question. Enter GovDeals.com.

GovDeals.com is an auction-based website where governments can sell off surplus and anyone can buy it. It’s a good way to reach a wide audience — practically the whole world, says Catoosa County Public Works Director Donald Brown.

Over the past two years, Catoosa County has sold off hundreds of items through GovDeals.com, from 725 chairs that were replaced at The Colonnade to pallets of interior parts, from trucks to 11 36-inch office doors to three 10-foot snow plows to numerous police cars to many other things.

Over the past two years, says Catoosa Public Information Officer John Pless, the county has sold surplus material amounting to $125,955.14 in sales. Of that, GovDeals.com received $6,344.96 in commissions, leaving the county with $119,619.18.

Here’s a sampling of things that were sold and the prices they went for.

You can visit GovDeals.com to see what local municipalities are selling and to possibly find some good deals.

This offer is currently unavailable.