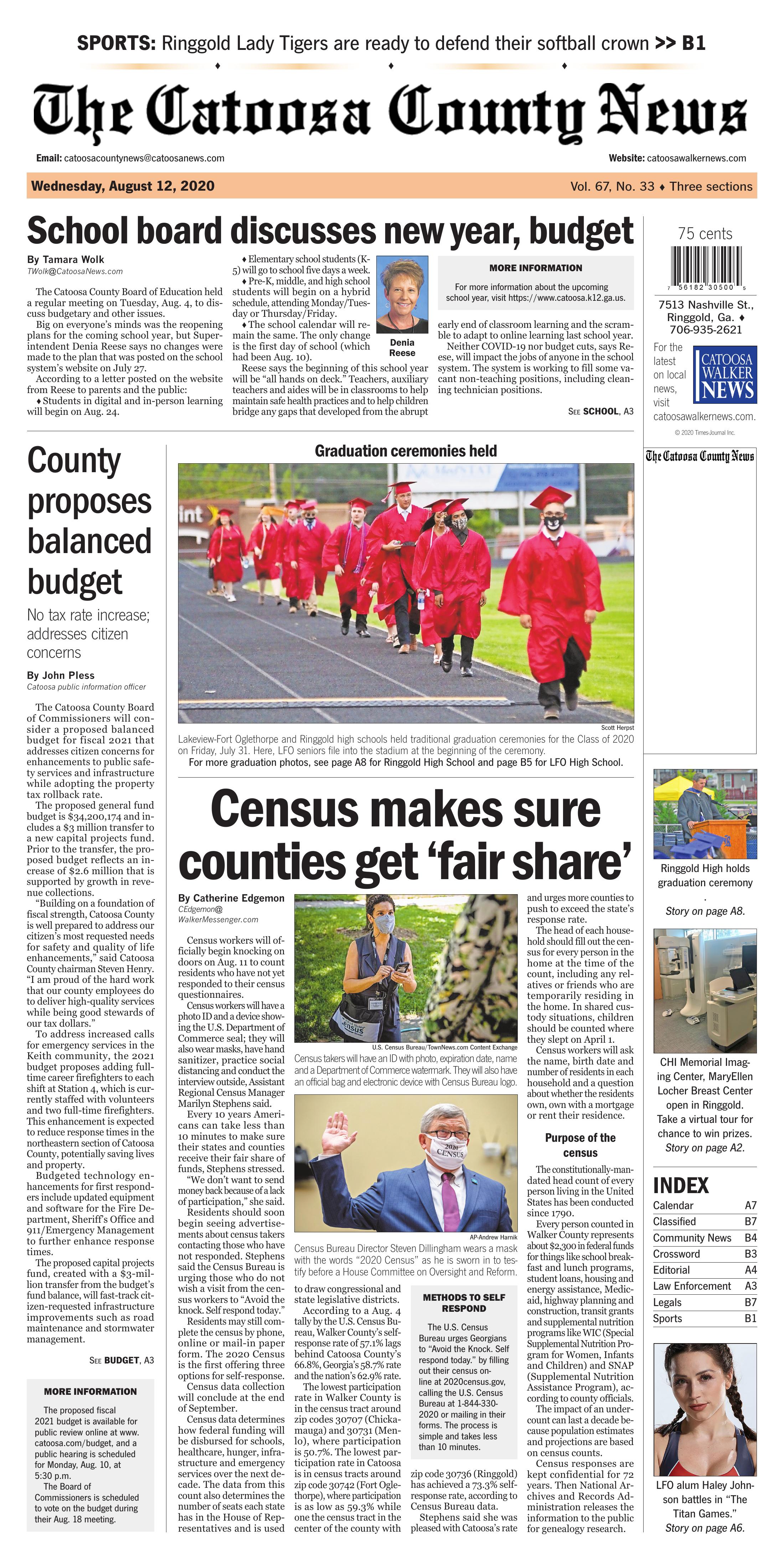 The Catoosa County Board of Education held a regular meeting on Tuesday, Aug. 4, to discuss budgetary and other issues.

Big on everyone’s minds was the reopening plans for the coming school year, but Superintendent Denia Reese says no changes were made to the plan that was posted on the school system’s website on July 27.

According to a letter posted on the website from Reese to parents and the public:

♦ Students in digital and in-person learning will begin on Aug. 24.

♦ Pre-K, middle, and high school students will begin on a hybrid schedule, attending Monday/Tuesday or Thursday/Friday.

♦ The school calendar will remain the same. The only change is the first day of school (which had been Aug. 10).

Reese says the beginning of this school year will be “all hands on deck.” Teachers, auxiliary teachers and aides will be in classrooms to help maintain safe health practices and to help children bridge any gaps that developed from the abrupt early end of classroom learning and the scramble to adapt to online learning last school year.

Neither COVID-19 nor budget cuts, says Reese, will impact the jobs of anyone in the school system. The system is working to fill some vacant non-teaching positions, including cleaning technician positions.

Reese says all classes at the elementary level will be kept at 16 students or below and most classes at upper levels will maintain the same numbers in order to facilitate social distancing.

“I want our students and parents to know this is the hardest decision I’ve ever had to make!,” Reese wrote on the CCPS website. “No one wants to open in full traditional instruction more than I do…

“I know students are less likely to contract the virus or to have serious symptoms from COVID, but I must take precautions to keep our teachers and staff healthy. Catoosa County is doing a good job mitigating the spread of COVID in our county; however, an outbreak in a school could escalate our numbers quickly.

“Families of 10,500 students and 1,700 employees are counting on the school system to open school safely. With smaller class sizes, social distancing in common areas, new body temperature scanners, additional cleaning technicians, advanced cleaning and sanitizing protocols, frequent hand washing, and masks when we can’t social distance, we are taking our responsibility to maintain student and employee health seriously, so Catoosa County Public Schools can remain open for the 2020-2021 school year.”

For more information about the upcoming school year, visit https://www.catoosa.k12.ga.us. 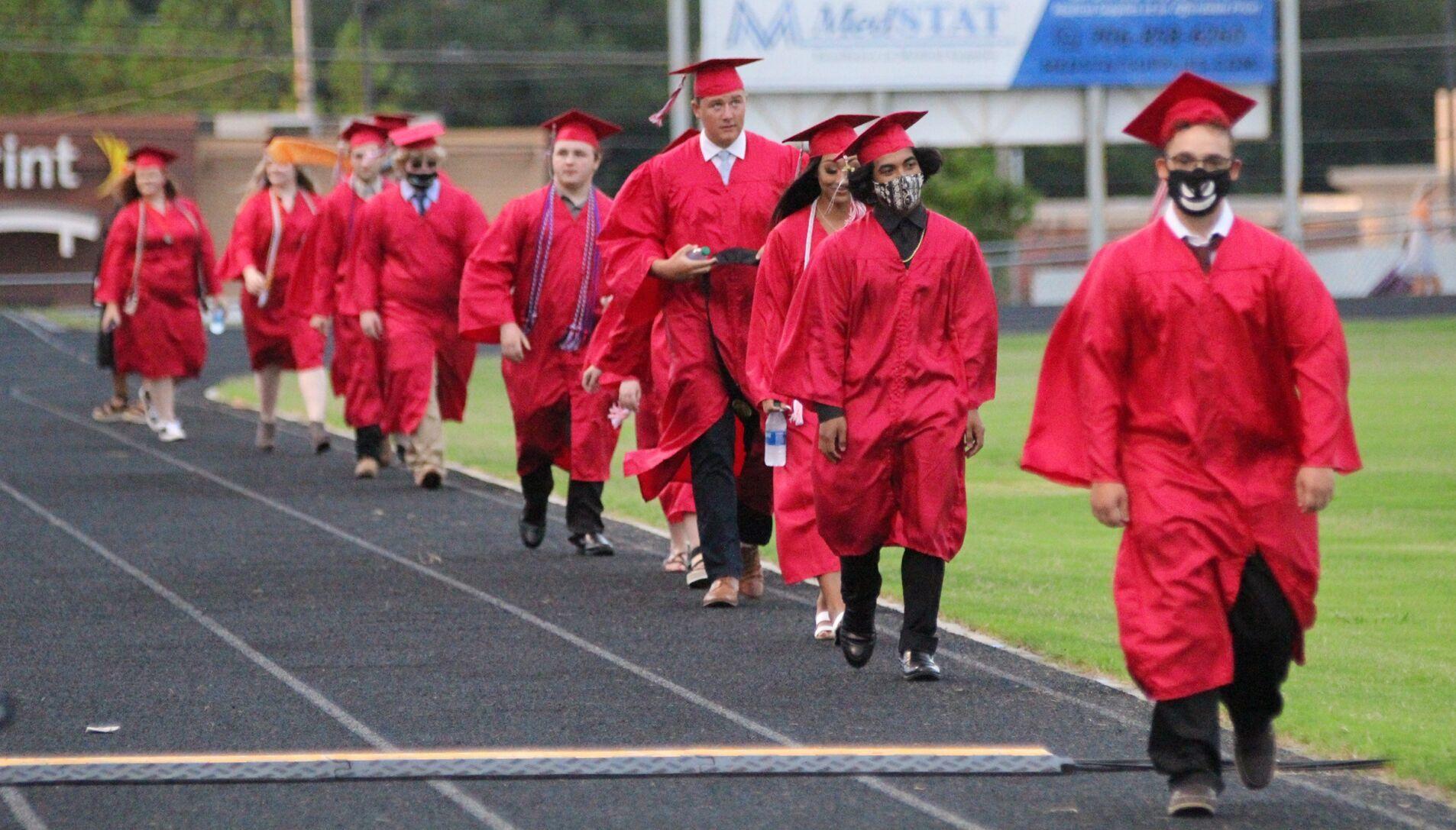 Lakeview-Fort Oglethorpe and Ringgold high schools held traditional graduation ceremonies for the Class of 2020 on Friday, July 31. Here, LFO seniors file into the stadium at the beginning of the ceremony.

Census workers will officially begin knocking on doors on Aug. 11 to count residents who have not yet responded to their census questionnaires.

Census workers will have a photo ID and a device showing the U.S. Department of Commerce seal; they will also wear masks, have hand sanitizer, practice social distancing and conduct the interview outside, Assistant Regional Census Manager Marilyn Stephens said.

Every 10 years Americans can take less than 10 minutes to make sure their states and counties receive their fair share of funds, Stephens stressed.

“We don’t want to send money back because of a lack of participation,” she said.

Residents should soon begin seeing advertisements about census takers contacting those who have not responded. Stephens said the Census Bureau is urging those who do not wish a visit from the census workers to “Avoid the knock. Self respond today.”

Residents may still complete the census by phone, online or mail-in paper form. The 2020 Census is the first offering three options for self-response.

Census data collection will conclude at the end of September.

Census data determines how federal funding will be disbursed for schools, healthcare, hunger, infrastructure and emergency services over the next decade. The data from this count also determines the number of seats each state has in the House of Representatives and is used to draw congressional and state legislative districts.

Stephens said she was pleased with Catoosa’s rate and urges more counties to push to exceed the state’s response rate.

The head of each household should fill out the census for every person in the home at the time of the count, including any relatives or friends who are temporarily residing in the home. In shared custody situations, children should be counted where they slept on April 1.

Census workers will ask the name, birth date and number of residents in each household and a question about whether the residents own, own with a mortgage or rent their residence.

Purpose of the census

The constitutionally-mandated head count of every person living in the United States has been conducted since 1790.

The impact of an undercount can last a decade because population estimates and projections are based on census counts.

Census responses are kept confidential for 72 years. Then National Archives and Records Administration releases the information to the public for genealogy research.

Methods to self respond

The Catoosa County Board of Commissioners will consider a proposed balanced budget for fiscal 2021 that addresses citizen concerns for enhancements to public safety services and infrastructure while adopting the property tax rollback rate.

The proposed general fund budget is $34,200,174 and includes a $3 million transfer to a new capital projects fund. Prior to the transfer, the proposed budget reflects an increase of $2.6 million that is supported by growth in revenue collections.

“Building on a foundation of fiscal strength, Catoosa County is well prepared to address our citizen’s most requested needs for safety and quality of life enhancements,” said Catoosa County chairman Steven Henry. “I am proud of the hard work that our county employees do to deliver high-quality services while being good stewards of our tax dollars.”

To address increased calls for emergency services in the Keith community, the 2021 budget proposes adding full-time career firefighters to each shift at Station 4, which is currently staffed with volunteers and two full-time firefighters. This enhancement is expected to reduce response times in the northeastern section of Catoosa County, potentially saving lives and property.

The proposed capital projects fund, created with a $3-million transfer from the budget’s fund balance, will fast-track citizen-requested infrastructure improvements such as road maintenance and stormwater management.

The 2021 budget includes funding for the cleanup of dilapidated properties, which will enhance neighborhood safety and property value.

Technology improvements are budgeted to enhance transparency and public engagement, including audio-visual equipment for the Board of Commissioners room and support for Catoosa County’s online and public information resources.

“We take great care in the way we allocate our citizen’s resources to address their concerns and our future needs,” said Catoosa County Manager Alicia Vaughn. “Our conservative approach to funding, without a tax rate increase, helps us to maximize the value of the services we deliver.”

The proposed fiscal 2021 budget is available for public review online at www.catoosa.com/budget, and a public hearing is scheduled for Monday, Aug. 10, at 5:30 p.m. The Board of Commissioners is scheduled to vote on the budget during their Aug. 18 meeting.