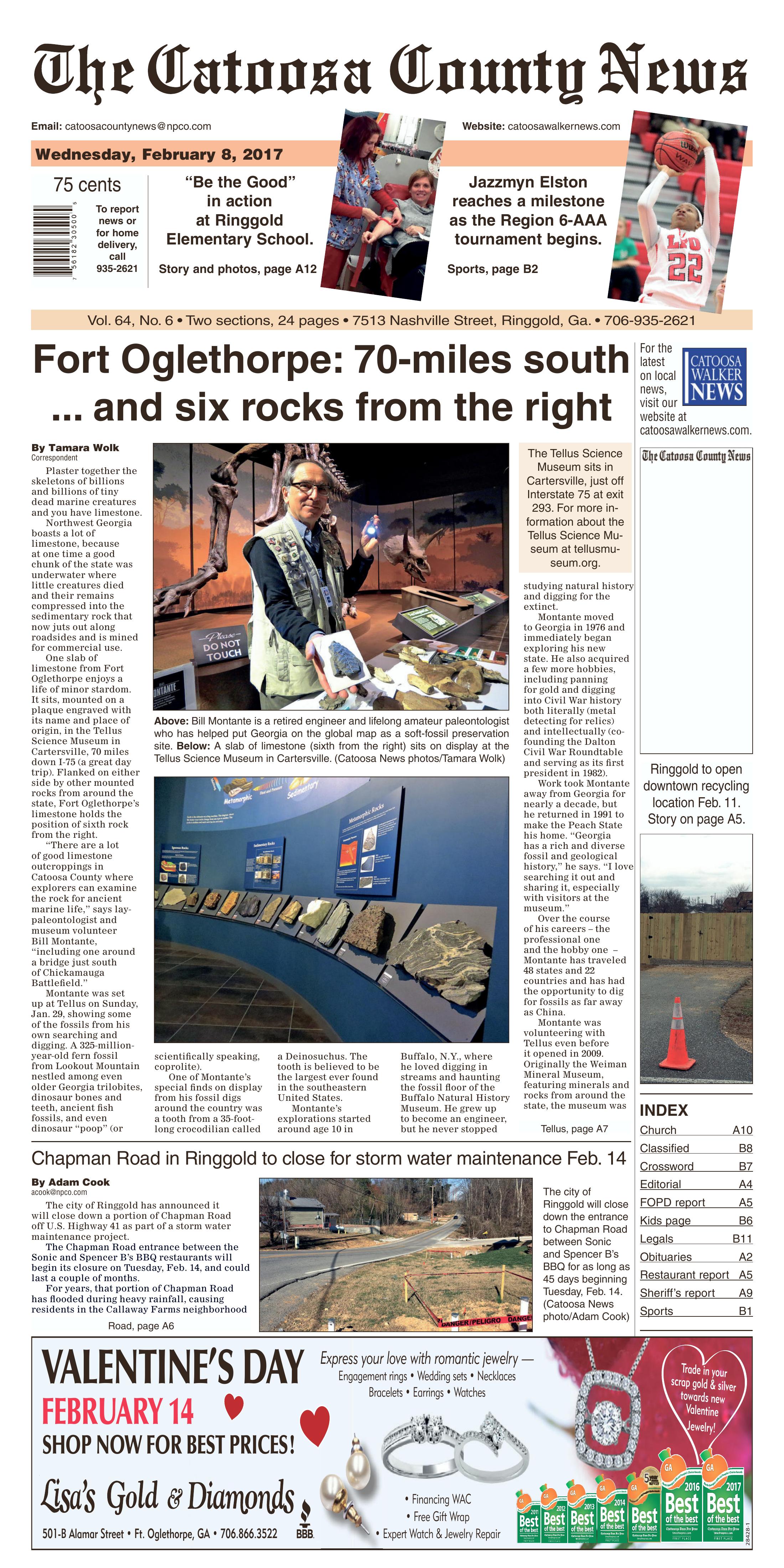 Fort Oglethorpe: 70-miles south ... and six rocks from the right

Bill Montante is a retired engineer and lifelong amateur paleontologist who has helped put Georgia on the global map as a soft-fossil preservation site.

A slab of limestone (sixth from the right) sits on display at the Tellus Science Museum in Cartersville.

The T-Rex skeleton at the Tellus Science Museum is a major attraction for visitors of all ages.

A visit to the Weiman Mineral Gallery inside the Tellus Science Museum offers visitors an view of just how diverse a place Georgia is on the rocks and minerals front.

The Tellus Science Museum's "Millar Science in Motion" gallery sports everything from a Wright flier to early motorized bicycles to space vehicles.

A life-size replica of the Space Shuttle Challenger that exploded shortly after lift-off is on display at the Tellus Science Museum.

Plaster together the skeletons of billions and billions of tiny dead marine creatures and you have limestone.

Northwest Georgia boasts a lot of limestone, because at one time a good chunk of the state was underwater where little creatures died and their remains compressed into the sedimentary rock that now juts out along roadsides and is mined for commercial use.

One slab of limestone from Fort Oglethorpe enjoys a life of minor stardom. It sits, mounted on a plaque engraved with its name and place of origin, in the Tellus Science Museum in Cartersville, 70 miles down I-75 (a great day trip). Flanked on either side by other mounted rocks from around the state, Fort Oglethorpe's limestone holds the position of sixth rock from the right.

"There are a lot of good limestone outcroppings in Catoosa County where explorers can examine the rock for ancient marine life," says lay-paleontologist and museum volunteer Bill Montante, "including one around a bridge just south of Chickamauga Battlefield."

Montante was set up at Tellus on Sunday, Jan. 29, showing some of the fossils from his own searching and digging. A 325-millionyear-old fern fossil from Lookout Mountain nestled among even older Georgia trilobites, dinosaur bones and teeth, ancient fish fossils, and even dinosaur "poop" (or scientifically speaking, coprolite).

One of Montante's special finds on display from his fossil digs around the country was a tooth from a 35-footlong crocodilian called a Deinosuchus. The tooth is believed to be the largest ever found in the southeastern United States.

Montante's explorations started around age 10 in Buffalo, N.Y., where he loved digging in streams and haunting the fossil floor of the Buffalo Natural History Museum. He grew up to become an engineer, but he never stopped studying natural history and digging for the extinct.

Montante moved to Georgia in 1976 and immediately began exploring his new state. He also acquired a few more hobbies, including panning for gold and digging into Civil War history both literally (metal detecting for relics) and intellectually (cofounding the Dalton Civil War Roundtable and serving as its first president in 1982).

Work took Montante away from Georgia for nearly a decade, but he returned in 1991 to make the Peach State his home. "Georgia has a rich and diverse fossil and geological history," he says. "I love searching it out and sharing it, especially with visitors at the museum."

Over the course of his careers – the professional one and the hobby one – Montante has traveled 48 states and 22 countries and has had the opportunity to dig for fossils as far away as China.

Montante was volunteering with Tellus even before it opened in 2009. Originally the Weiman Mineral Museum, featuring minerals and rocks from around the state, the museum was

able to reinvent itself thanks to a fundraising campaign that generated substantial donations. Montante donated some of his own fossils and became the volunteer manager of the museum's preparation lab that readies rocks, minerals and fossils for display.

Tellus still houses the Weiman mineral collection, in new and improved style, but the museum, now sitting at 120,000 square feet, also boasts a fossil gallery that sports full skeletons of large and small dinosaurs, including an Apatosaurus, a T-Rex, an Appalachiosaurus (Georgia's largest predator), raptors, sea creatures and more.

You'll find a "Science in Motion" gallery that features a replica of the first Wright flier, motorized bicycles from the early 1900s, some of the earliest motor carriages, an old helicopter, a jet fighter cockpit, satellites, and a replica of part of the Space Shuttle Challenger that exploded shortly after lift-off.

Children can dig for fossils and pan for gems, as well as conduct experiments with sound, light, electricity and more. There's a greenhouse where youngsters can learn about how things grow and a walk-in tree where visitors young and old can learn about weather.

The museum also has a digital planetarium and an observatory equipped with a 20-inch telescope. Special temporary displays rotate throughout the year, some on loan from the Smithsonian in Washington, D.C.

Topping off a visit to Tellus, folks can chat and munch at the indoor cafe and purchase souvenirs at the well-stocked gift shop.

Montante can often be found in the museum's "Fossil Gallery," showing parts of his personal collections and encouraging children and adults alike to pursue their curiosity, because they never know what they'll find. He should know.

One day, while exploring in Floyd County of northwest Georgia, Montante discovered some soft fossil preservation identical to what had been found in the famous Burgess Shale formations of British Colombia, Canada, in the early 1900s. But the amateur paleontologist had trouble getting the pros to take him seriously, until he began finding more – algae, sponges, a soft-shelled trilobite, and other Burgess-like fossils.

Montante joined forces with paleontologist Dr. David R. Schwimmer of the University of Georgia at Columbus. With a two-year study grant from National Geographic the two men were able to compare their specimens with those from the Burgess Shale collection at the Museum of Natural History in Washington, D.C., and confirm their suspicions. "I had achieved my goal of putting Georgia on the global map as a softfossil preservation site," says Montante.

Last April, Montante was digging in Murray County and uncovered what many believe may be the first trilobite nest site ever discovered.

"It is almost beyond my ability to express what it's like to swing a rock hammer and split a piece of shale that was once mud at the bottom of an ancient ocean and be the first person to lay eyes on something that has been extinct for half a billion years," says Montante. "You stare in awe at the form that almost speaks to you saying, 'Where have you been these half billion years? What a story I have to tell you!'"

A trip to Tellus Science Museum will make you look at your state and the world with new awe. If you're lucky, you'll show up on a day Bill Montante is there and he'll give you some of his best advice: "Wonder, be persistent, probe the unknown, seek answers to questions, and do not be deterred when the answers don't match your expectations – that's the time to dig deeper or seek a different path to understanding. It's all about discovery."

And while you're there, be sure to visit Fort Oglethorpe's contribution to the museum.

The city of Ringgold will close down the entrance to Chapman Road between Sonic and Spencer B's BBQ for as long as 45 days beginning Tuesday, Feb. 14.

The Chapman Road entrance being closed for maintenance could affect some of the traffic flow along U.S. 41 near the site.

The city of Ringgold has announced it will close down a portion of Chapman Road off U.S. Highway 41 as part of a storm water maintenance project.

The Chapman Road entrance between the Sonic and Spencer B's BBQ restaurants will begin its closure on Tuesday, Feb. 14, and could last a couple of months.

For years, that portion of Chapman Road has flooded during heavy rainfall, causing residents in the Callaway Farms neighborhood

to have to find an alternate route going to and from home.

The flooding has also at times created water issues along the portion of U.S. Highway 41 in front of Chapman Road.

City officials have been working with Catoosa County for some time on a joint project to remedy the issue by raising the road to alleviate some of the creek water that builds up under Chapman Road.

The council awarded the $920,919 bid for the project in November to Rossville-based Talley Construction, with funding contributions from both the Georgia Department of Transportation, and Catoosa County.

The bid includes paving and striping on U.S. 41, the addition of three concrete box culverts to Chapman Road, and the raising of the road.

"The closure is due to the installation of a storm water structure, and the raising of the road by two feet," City Manager Dan Wright said. "This will help during flash flooding events."

Residents will still be able to access the Chapman Road area through the north entrance, which exists a little further down U.S. 41 across from Bailey's BBQ.

According to Talley Construction's project manager, Tony Wardlaw, the work is expected to run through March.

"We will begin the detour February 14, and it will last approximately 45 days," Wardlaw said.