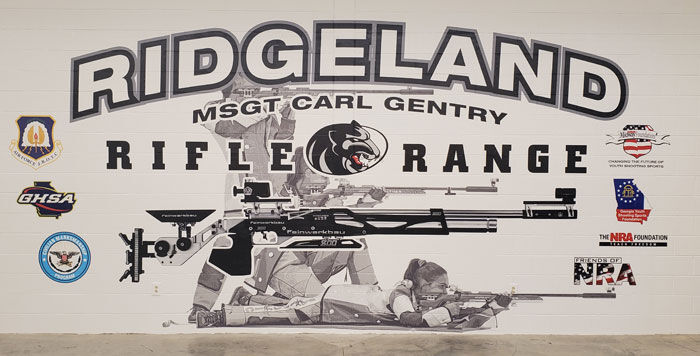 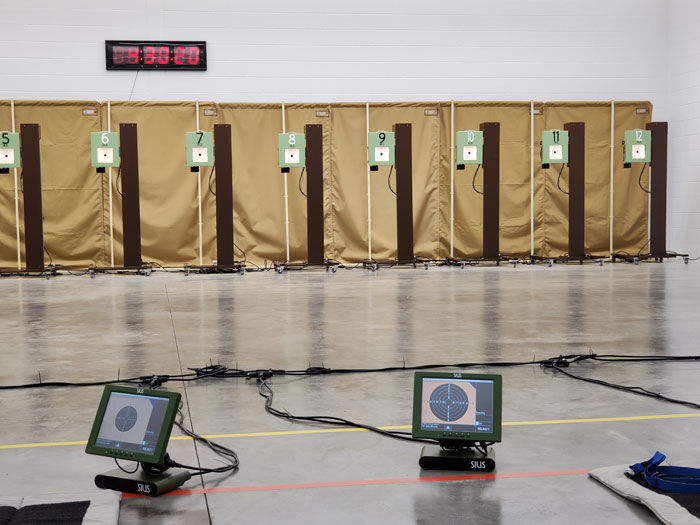 The new rifle range has a state-of-the-art electronic scoring system with 12 firing lanes and monitors so shooters can instantly see their marks. 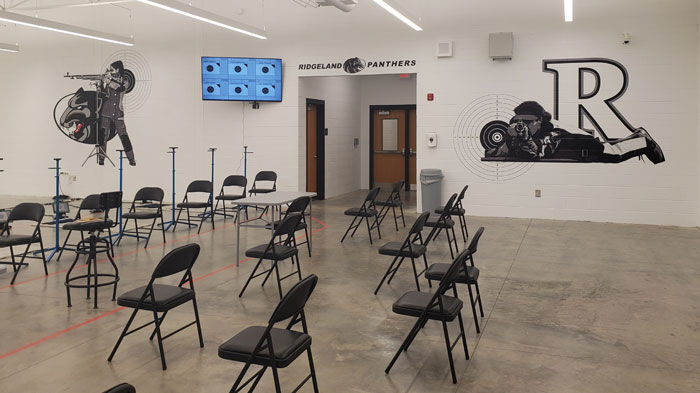 The range is also equipped with giant monitors so spectators can keep up with the scoring of the matches in real time.

The new rifle range has a state-of-the-art electronic scoring system with 12 firing lanes and monitors so shooters can instantly see their marks.

The range is also equipped with giant monitors so spectators can keep up with the scoring of the matches in real time.

There have been a lot of new additions at Ridgeland High School over the past few months, from a new auxiliary gymnasium to new facilities on the visitors’ side at Bowers and Painter Field.

And one of the shiniest new facilities is about to be introduced to the public.

Ridgeland’s new state-of-the-art air rifle range is ready to host its first matches for the 2020-2021 season and its is perhaps one of the finest in the state, with a set-up that rivals some college programs.

Thanks in part to a $75,000 range improvement grant from the Midway USA Foundation, the Panthers’ new digs include 12 firing lanes, a new electronic target system, an extended Orion scoring system and wall wraps, as well as plenty of seating for spectators.

Master Sergeant Carl Gentry, who heads up the riflery program at the school, said the electronic scoring set-up is one of the features that make the range unique.

“The athletes can actually see their shots on the monitors once they make them and they can zoom in or out (on the monitors) to see them better,” he explained. “Then we have 65-70-inch monitors so the spectators can instantly see what’s happening and be able to keep up with the scores.

“Riflery in Georgia hasn’t been a big spectator sport in the past. It’s been like going to a football game and not knowing the score until the very end of the game. That’s not as much fun, but now they’ll be able to keep track as it’s happening.”

In addition to the range is a supply room that houses safety shooting suits, ammunition and an enormous gun safe that houses some very expensive competition rifles. Gentry said that the rifles were obtained with an NRA Foundation grant.

“These rifles are a little over $3,000 each,” he added. “Without funding for them through this grant, we’d be in a hard place right now.”

However, he said that the improvements are paying off in a major way.

“We had the largest number of people come out for a tryout this year than we’ve ever had and we have lots of parent support too,” he said. “We’re going to have 11 on the school team, plus an (Air Force) Junior ROTC team that will have students on it as well.

“This is something we’ve been wanting for a while now.”

Retired Air Force Lieutenant Colonel Byron Love, who along with Gentry, heads up the school’s Air Force JROTC program, called the range “an awesome thing to have”.

“We’re super, super proud of it and it’s laying a foundation that has been in the works for the last six years,” Love began. “There’s been tons of people involved in this from Mr. (Damon) Raines to Mr. (Chris) Jones with the district to Mr. (Glen) Brown and Mrs. (Karen) Hughes, our two principles during this time, who have both been big proponents for this, and Dr. (Robert) Stinson, our athletic director, who has also been a big supporter for us. Then you look at the Midway USA Foundation and the NRA and a lot of these other people that have been involved in putting this together and it’s been great.”

However, Love said one person has been a “superstar” in making the range a reality and that’s the person for whom the range has been named — Carl Gentry.

“He’s really layed a strong, strong foundation and he’s really been building up the supplies and equipment and getting the word out,” Love continued. “He’s been a big proponent for getting the range that we have now. He just has a lot of energy and he’s done a lot of work. Having that new range is probably the last little piece that we needed to build a super, super strong program and we’re in position for that now, so this is awesome. We’re proud and excited.

“Normally you wait (to name things) after a person retires or something like that, but in talking with Dr. Stinson, we decided to go ahead and do it now. It’s like the old adage says, ‘you give honor where honor is due’ and it’s definitely due. This is a great honor for him and it’s a great honor to have him. He deserves this.”

“I was surprised,” Gentry chuckled about hearing the news. “It was something that never would have crossed my mind. Everything I’ve tried to do, I’ve done for our kids with their best interests in mind. I guess the school has been paying attention to some of the things I’ve done, but I’ve just been a small helper. There’s been a lot of people involved.”

“It’s really nice and it kind of helps us out,” she said. “This will be our first time holding competitions at our own home instead of having to go somewhere else to do it.”

Brewer added that it makes her happy to be able to shoot in a range as modern and state-of-the-art as the one Ridgeland has now and that Gentry deserves a lot of the credit.

“He’s meant a lot to this program,” she continued. “He helps everyone to be better than they think they are and he helps them try their hardest. If it wasn’t for him, we probably wouldn’t have this range.”

Stocks move mostly lower even as Nasdaq edges toward record

Yellen set to restore Treasury-Fed cooperation, with eye on GOP

For Napoli fans, Maradona's legend will always live on